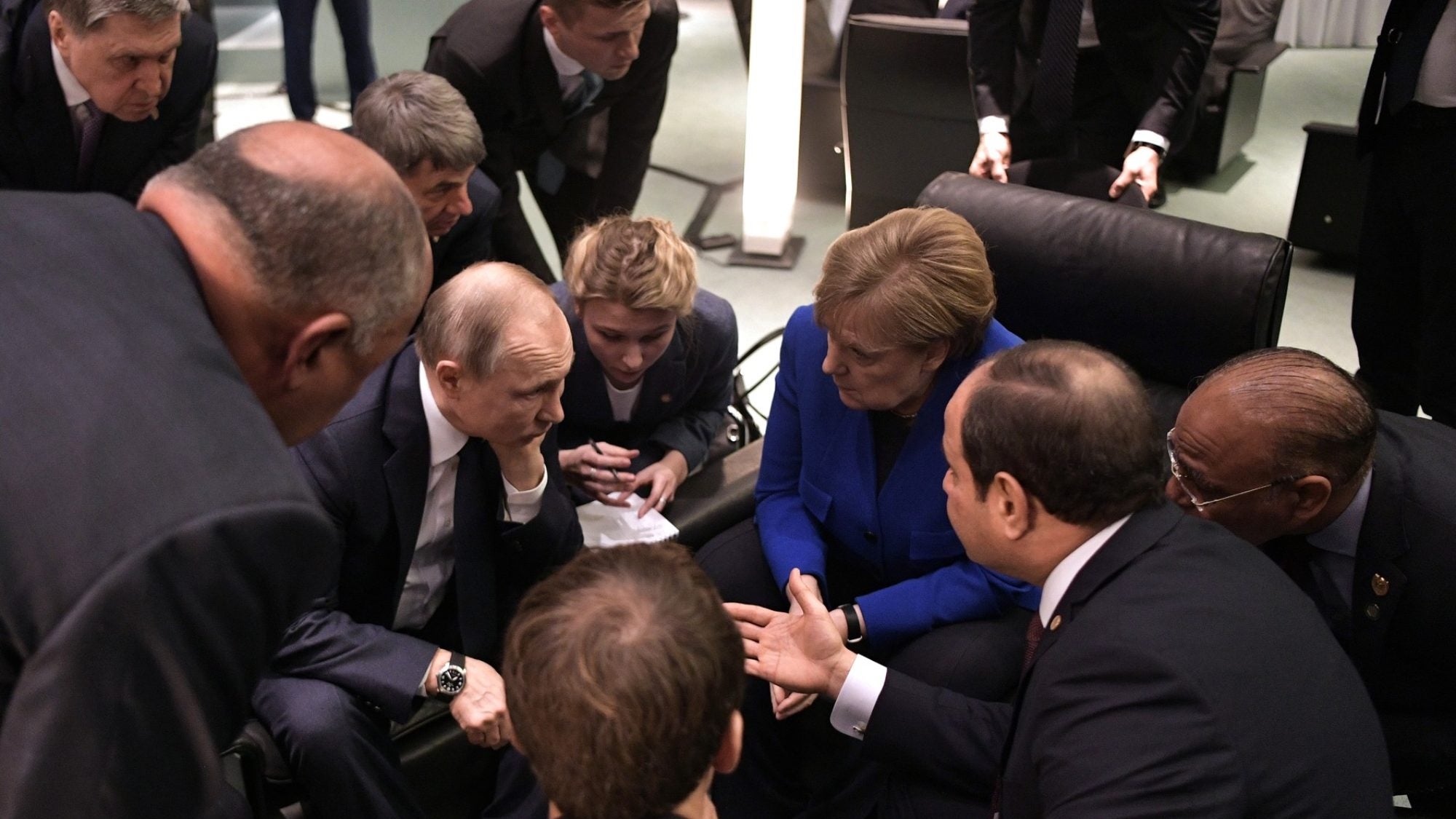 Title: The Libyan Conflict: A Priority for the European Union?

A photo that surfaced from January’s Berlin Conference on Libya shows an intense discussion between prominent heads of state—among them Angela Merkel, Emmanuel Macron, Vladimir Putin, and Abdel Fattah el-Sisi—highlighting the international community’s concerns over the ongoing Libyan conflict. The EU has significant stakes in the Libyan peace process and should be prioritizing the conflict’s resolution. And yet, it was these European heads of state, rather than EU representatives, who led talks at the summit, begging the following question: how can the EU strengthen its position and influence as a peacemaker in the Mediterranean?

A Country Torn in Two

A few years after the 2011 NATO strikes, Libya has been engulfed in civil war, causing the country to split in two. The UN-recognized Government of National Accord (GNA), headed by Fayez al-Sarraj, rules approximately one fourth of the country. Based in Tripoli, the GNA controls the capital’s oil-exporting port facilities. To the GNA’s benefit, the National Oil Company, the only state entity able to sell oil and collect oil revenue without risking UN sanctions, is also based in Tripoli, as is the country’s Central Bank. The GNA enjoys the military protection of a number of autonomous militias, as well as a steady supply of equipment from Turkey (mainly drones, missiles, and troops) and Qatar (due to the GNA key members’ close affiliation with the country’s Muslim Brotherhood). Italy, too, has historically been an ally of the GNA; the country has significant stakes in Libya’s oil market and relies on the Greenstream pipeline that runs from Western Libya to the Italian city of Gela. The pipeline is owned by the major Italian oil and gas corporation ENI and the Libyan National Oil Company.

Marshal Khalifa Haftar heads Libya’s National Liberation Army (NLA), which controls the rest of the country. The NLA boasts military support from Egypt, the United Arab Emirates, and Russian private mercenary groups. In addition to its overwhelming military strength, which has enabled Haftar to lay siege to Tripoli several times, the Benghazi-based parallel government lays claim to the Parliament (located in Tobruk, a city in eastern Libya) and, more importantly, controls the Cyrenaica oil fields, which account for 60 percent of Libya’s oil reserves.

Attempts to resolve the Libyan conflict have so far followed an erratic trajectory, bouncing back and forth between multilateral and bilateral settings. The multilateral approach holds the United Nations Support Mission in Libya (UNSMIL) at the forefront of its effort. Under the former leadership of UN Secretary-General Special Representative Ghassan Salamé, UNSMIL has relentlessly tried to set up an inclusive arrangement between the GNA and NLA, though these efforts have often been threatened by violence in the region. However, UNSMIL has come under fire from both Libyan governments for its criticisms of ceasefire violations and, more generally, for both parties’ lack of cooperation. In conjunction with UN efforts, other multilateral endeavors have included the promising December 2015 Moroccan-led conference in Skhirat, which unfortunately failed when the Libyan Parliament refused to endorse the newly elected GNA. Conversely, France and Italy have taken the lead on various bilateral initiatives over the last three years, with each country trying to leverage its respective influence to broker a ceasefire agreement and draw a roadmap towards Libya’s reunification. These initiatives—held in Saint-Cloud in July 2017, in Paris in May 2018, in Palermo in November 2018, and in Rome in January 2020—have all failed, largely due to their organizers’ struggle to establish inclusive or realistic solutions. Turkey and Russia, too, have played roles in the unfolding crisis, sending military equipment and proxy militias to support the GNA and the NLA, respectively; when paired with the organization of the Moscow summit in January 2020, these actions reflect a bold strategy to exert influence in the region.

The EU should prioritize the Libyan conflict for a number of reasons, not least of which includes Libya’s geographic proximity to Europe. The conflict poses a major humanitarian challenge; the country’s institutional instability since the fall of the Kaddafi regime has established a new human trafficking hotspot in the region. Criminal groups have emerged and thrived under loose or absent controls from Libyan border enforcers, particularly the Libyan Coast Guard. Increased EU support for these security forces, so as to enhance their strength and capacity, is a necessary response to this humanitarian crisis.

The EU should also seriously consider the regional connection between the Libyan conflict and the Sahel crisis and better coordinate its actions in Libya with its ongoing involvement in the G5 Sahel. As President Macron recently highlighted during January’s G5 Sahel summit in Pau, the Libyan crisis is an ongoing source of instability for the Sahel region: in the Fezzan region of southeastern Libya, a number of ethnic groups (such as the Toubou, Ouled Slimane, Awagir, Maghariba, Obeidat, Barasa and Hassi), rebel forces (the Chadian “Military Command for the Salvation of the Republic” and the Sudanese “Minni Minnawi Sudan Liberation Army”), and other Salafist organizations are regularly involved in attacks against the Chad and Sudanese people.

Additionally, taking proper stock of the challenges the Libyan conflict poses and assuming a lead role in its resolution would be consistent with the EU’s self-proclaimed role as a “geopolitical” European Commission. If EU Commission President Ursula Von der Leyen wants to provide the institution with strategic, united, and strong leadership in addressing global affairs, solving the Libyan conflict should be at the top of her priorities. Together with the support of UNSMIL and a regional, neutral leader—such as Morocco, whose salient diplomatic efforts prompted the 2015 Skhirat conference—swift action by the European Commission would not only benefit the Libyan peace process, but the EU itself, by compensating for the internal mishaps of EU members France and Italy during the bilateral peace initiatives. Taking a leadership role would also prove to be a unique opportunity to counter the destabilizing influence of Turkey and Russia in the region, both of which invited themselves to promote their interests in an area beyond their traditional spheres of influence. Finally, this prioritization by the EU would go hand in hand with an increase of the institution’s hard power, falling in line with President Macron’s request to strengthen European military sovereignty.

Amine Bennis is a legal counsel with over 10 years of experience in law and multilateral development banking. A graduate of the Universities of Paris II Panthéon-Assas, Sciences Po Paris, and the Fletcher School of Law and Diplomacy, he specializes in development finance and has a passion for international relations and geopolitics. He writes here in a personal capacity.