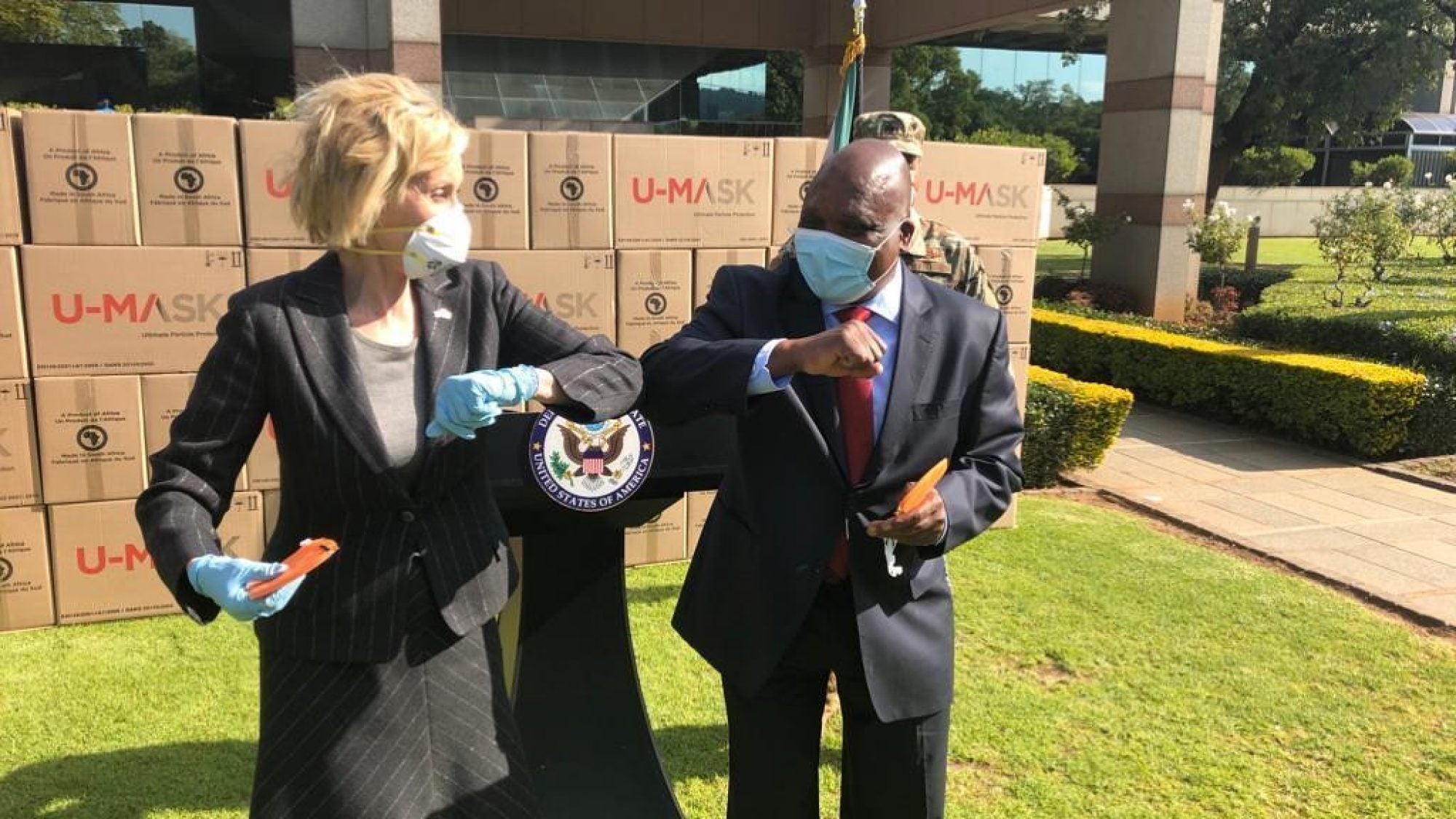 Title: COVID-19 and the Destruction of the Social Contract in South Africa

The COVID-19 pandemic is a human rights crisis, threatening the rights to health, food security, housing, dignity, and equality. Across the world, including in South Africa, the pandemic reveals the fault lines in our society, to which people must insist on a governmental response that respects, protects, and upholds the human rights of all.

The pandemic is the ultimate test of governments’ commitments to human rights, even in comparison to other times of crisis. The South African government is no exception to this test. In particular, South Africa needs a caring government, that, in the face of a crisis, resists the urge to use both strong-man tactics and widespread austerity measures. The South African government must approach the pandemic with a commitment to ensuring socio-economic rights, such as the right to adequate access to shelter, food, healthcare, and social security.

South Africa’s Constitution enshrines these fundamental socioeconomic human rights in the Bill of Rights, which explicitly expresses the social contract between the country’s leaders and the people who elected them. However, during the more than year-long lockdown, the South African government has disregarded labor laws, abandoned the school nutrition program, enforced a heavy military presence while ignoring violence in poor and working-class communities. These actions comprise an overreach beyond the necessary steps to stop the virus’s spread.

Likewise, the country has witnessed a wholly inadequate response to protecting people from abject poverty due to the lockdown, including a reluctance to fully realize the right to social security through social assistance monetary grants for those most in need. At the start of the pandemic, the South African government put in place various temporary grants, as well as sixteen dollar ‘top-ups’ for all existing social grants in an effort to ameliorate the economic impact of COVID-19. These temporary grants included the R500 caregivers grant, given predominantly to unemployed mothers and the implementation of the R350 (twenty-three dollar) COVID-19 Social Relief of Distress (SRD) Grant to anyone aged eighteen to fifty-nine with no income. These irregular grants are reassessed monthly and only a fraction of the minimum amount (eighty-five dollars) needed for basic food, energy  and shelter, known as the Upper Bound Poverty Line. Despite attempts to prevent its end, the caregivers grant has since been terminated, leaving over 7 million people destitute. Meanwhile the SRD grant, which the government has threatened to terminate twice, insufficiently addresses unbanked and rural residents who may not have the necessary technology and/or mobile data to apply for it. Because direct transfers are unimplemented, R350 grant qualifiers, many of whom live in rural areas, must travel to post offices in the nearest town to collect their grant payment at their own expense.

These grants, well below South Africa’s lower-bound poverty line, inadequately address the economic hardships from COVID-19 and the ensuing lockdown. According to reports from Statistics South Africa, over 600,000 formal sector jobs were lost due to COVID-19, and one in five people in South Africa now experience weekly hunger. Research conducted by the Pietermaritzburg Economic Justice & Dignity Group, shows that at the end of 2020, the food basket price in South Africa increased month by month since the start of 2020: staple items such as potatoes and sugar beans rose by thirty-five percent and twenty-three percent respectively.

Despite the ongoing pandemic and lockdown, as well as calls from economists, civil society, political parties, and international bodies for the implementation of a universal basic income,  the R350 grants for those aged eighteen to fifty-nine years will be terminated at the end of April. Black Sash, a South African NGO, released a comprehensive 2020 report advocating for Basic Income Support (BIS) and launched a growing petition pushing for this policy.

Troublingly, many South African politicians do not view socio-economic rights as mandatory protections enshrined in the Bill of Rights, as evidenced by the termination of pandemic-related grants and assistance. Following South African Finance Minister Tito Mboweni’s Budget Speech on February 24, 2021, Social Grants were marginally increased to meager amounts below the inflationary rate. This included the Child Support Grant, raised from sixty cents to thirty dollars to ensure that children from poor economic backgrounds have at least some access to food. The Finance Minister, in response to criticism, stated that “there was no need to be apologetic” about these miniscule increases because there exists no social contract that requires social assistance grants to annually increase. This statement represents a growing narrative among political elites that implementing social relief programs to ordinary citizens is a kind gesture but not a mandatory responsibility.

Section 27 of the South African Bill of Rights provisions the right to Social Security for all in need, “including appropriate social assistance if they are unable to support themselves.” Social assistance in the form of social grants is provided to approximately eighteen million of the most vulnerable in South Africa: the elderly (sixty years and over), children under the age of eighteen years, and people living with disabilities unable to work. However, social assistance grants exclude able-bodied people between the ages of eighteen to fifty-nine years with no or little income.

The South African government’s obligation to implement Basic Income Support (BIS) is also an international obligation. In January 2021, South African President Cyril Ramaphosa himself stated that working toward a recovery from the devastating effects of COVID-19 required that strategies “be aligned to … the UN Agenda 2030 for Sustainable Development and other multilateral environmental agreements.” South Africa, however, has missed both the implementation and reporting deadline of October 2020 to the United Nations Committee on the International Covenant of Economic, Social and Cultural Rights (ICESCR). The Covenant forms the cornerstone of international human rights law and specifically recommended that South Africa “ensure that those between the ages of eighteen and fifty-nine years with little or no income have access to social assistance,” “consider the possibility of introducing a universal basic income grant,” and “raise the level of government social assistance benefits to a level to ensure an adequate standard of living for recipients and their families.”

Rather than implementing these recommendations, the President, throughout both the African Nation Congress (South Africa’s governing party) annual political statement and the official State of the Nation Address, continues to promote universal employment as the ultimate means out of poverty. Yet as the Black Sash report on BIS shows, unemployment is structural in South Africa. Since the advent of democracy twenty-seven years ago, there have been numerous public job-creation interventions such as the Expanded Public Works Program (EPWP), the promotion of small, medium and micro enterprises (SMMEs), the Employment Tax Incentives Act, and the Youth Employment Service (YES) initiative, which aims to offer paid work experience to one million young South Africans over the next three years. However, these programs alone cannot produce the desired results of reducing poverty, inequality, and unemployment. In reality, the growing number of unemployed people along with the shrinking South African economy means that the job market will exclude many. This is exacerbated by the growing risk of automation and digitalization in the workplace.

The Black Sash report also cites comparative study evidence on the positive effects BIS has had on poverty levels, economic participation and access to educational and health resources. Perhaps one of the most important motivations highlighted in the report is that BIS promotes human rights by allowing people to make dignified choices and participate in different forms of work that the market does not always reward.

South Africa remains one of the most unequal countries in the world. It faces the triple threat of unemployment, inequality, and abject poverty‚—realities which many mistakenly believe job opportunities alone can resolve. While employment remains fundamental in the fight against inequality and poverty, to ignore the immediate needs of those unemployed now is disingenuous and dangerous.

The South African government has the Constitutional responsibility to assist families to meet their socio-economic needs when they are unable to do so owing to the economic, structural, and historical factors in South Africa, and especially because of the harsh realities of the COVID-19 lockdown. This assistance must take the form of a regular, basic income support for all who are unable to provide for themselves. Moreover, this needs to be a dignified amount that recognizes the rising cost of living in a COVID-19 world. For the survival of the most poor and vulnerable, and in order to restore the destroyed social contract, the South African government needs to realize the constitutional right to social assistance.

Amanda Rinquest is a South African activist and lawyer working on Basic Income Support. She completed her Bachelor of Social Science and LLB from the University of Cape Town, where she is also working towards her LLM in Environmental Law.