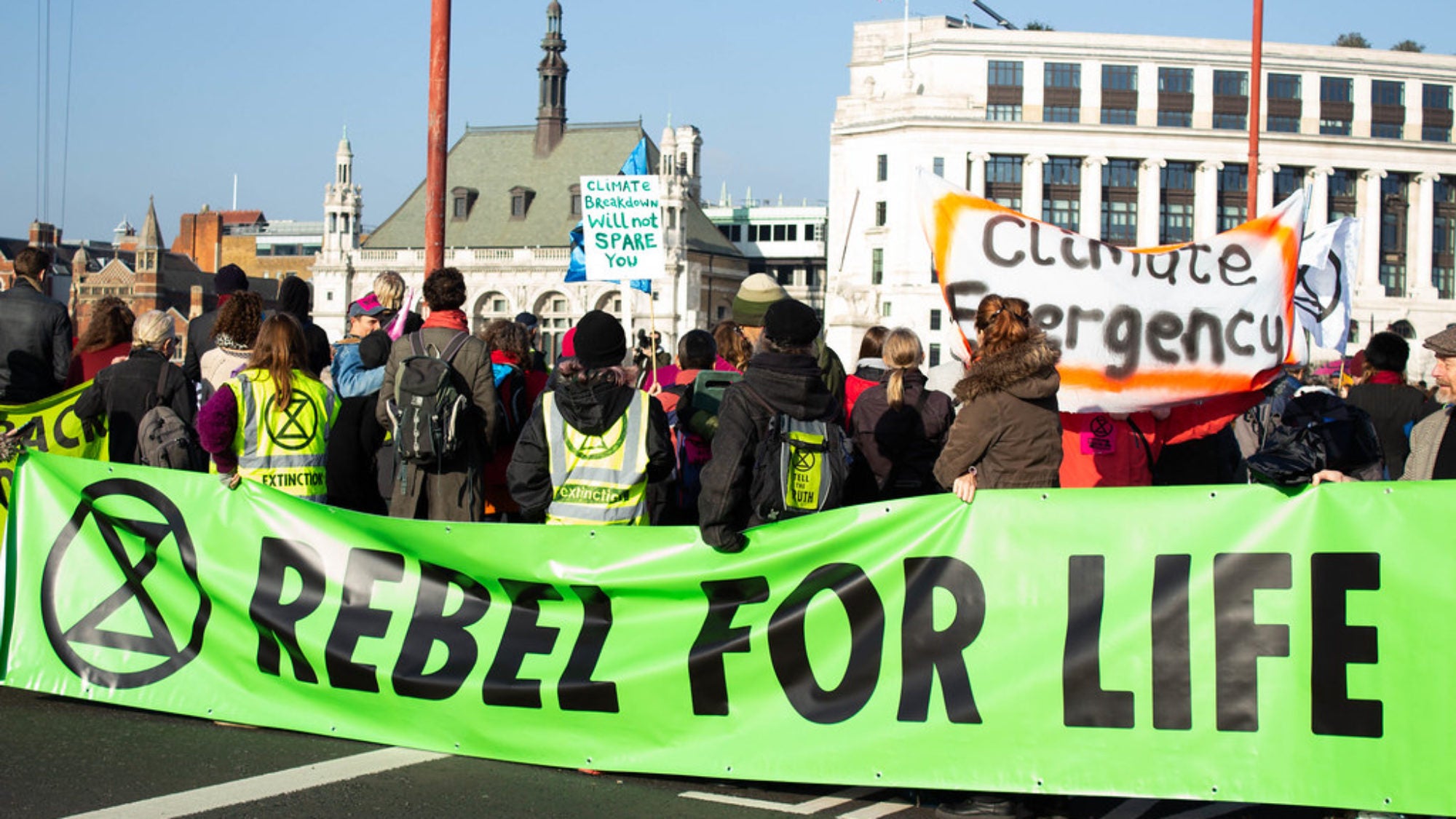 In the eighteen months before the start of the coronavirus pandemic, public opinion about climate change underwent unprecedented transformations. That period is over. Now, few people are thinking much about how the world will look in ten years, let alone fifty.

The current health crisis will eventually pass, and climate change will return to everyday debate. But the surge in public concern about global warming has been interrupted, and it is unlikely the conversation will pick up precisely where it left off.

This will likely prove to be a particular challenge for those involved in the new wave of climate protest movements. Their recent successes have been dramatic, but they may need to reform their approach if they are to prosper in the post-coronavirus era. The movements can use the time out of the spotlight to plan how to build on their successes—which may have been reaching their limits anyway—including winning over less sympathetic audiences and focusing on more specific policy objectives.

Opinion polls show that concern about climate change has grown sharply in recent years. Across the European Union, the proportion of people who identified climate change as the top issue facing the world nearly doubled, from 12 percent in 2017 to 23 percent in 2019. In the United States, 66 percent of registered voters said they were “worried” about it in November 2019, from a low of about 50 percent in 2013. In the United Kingdom, a regular poll found that the environment was the third-most chosen as the most important issue facing the country, from a list of sixteen, with four times as many people picking it in February 2020 as had done so three years ago.

Several factors appear to be behind this trend. First-hand experience of extreme weather events linked with climate change became increasingly widespread. The Northern Hemisphere summer heatwave of 2018 was a turning point in many countries, partly because it was followed by several attribution studies—widely covered by the media—that showed the connection between the heat and climate change. Polling shows a growing public recognition of this; in the United Kingdom, for example, the proportion saying the country was already “feeling the effects” of climate change increased from 41 percent in 2010 to 64 percent in 2019.

Then came the Intergovernmental Panel on Climate Change (IPCC) report on limiting global warming to 1.5°C, widely reported as a warning of the risks of inaction and a sign of the remaining, but dwindling, potential for global action. As if to emphasize the point, the report was immediately followed by California’s worst-ever wildfire season, with 2019 bringing disasters around the world such as Cyclone Idai, one of the most destructive storms to have hit the Southern Hemisphere, and the unprecedented Australian bushfires.

These developments set the conditions for the outbreak of the most significant climate change protests to date. Millions of children went on strike from school throughout the year, with Greta Thunberg becoming a household name. Extinction Rebellion—a new protest movement that started in the United Kingdom a few weeks after the IPCC’s 1.5°C report was published and which now operates in about seventy countries—occupied major roads and bridges, with participants seeking arrest to create political pressure. Its first major protest brought widespread disruption to London for two weeks in spring 2019. Compared with previous climate change protests, both movements were more disruptive and required visible sacrifices from large numbers of non-traditional activists, including scientists, doctors, and farmers. As a result, they commanded widespread media and public attention.

The protests kept climate change in the public eye and so maintained pressure on governments and major polluters to increase their commitments to cutting emissions. The school strike movement seems to have been particularly important in this regard, with Google data on search terms showing a spike in interest in climate change, to a record level, around the time of an international strike in September 2019 that involved several million people.

While opinion poll data suggests most people disapproved of Extinction Rebellion’s disruptive tactics, in the United Kingdom, at least, the group’s impact is evident. Not only did their protests keep climate change in the news—particularly during their spring 2019 rebellion—but their activities shifted the terms of debate and so influenced politics.

Their success is most clear with the question of whether countries should aim to eliminate net carbon emissions (meaning emissions would be balanced by processes that absorb gases, helping to halt warming) and, if so, when they should do so. When the United Kingdom legislated in June 2019 for net-zero emissions by 2050, the government could accurately describe their target as world-leading. But with Extinction Rebellion demanding a net-zero date of 2025, the Conservative government’s target began to seem like an underwhelming baseline, with several rival political parties committing to an earlier target in the United Kingdom’s 2019 election—a radical change from the 2017 election, when the manifestos barely mentioned net-zero.

Despite these achievements, spring 2019 might prove to be the high-water mark for Extinction Rebellion. Even before the pandemic, there were signs of trouble. Their second major protest, in October 2019, was much less successful in the UK than the actions in the spring had been. It was partly hampered by bad weather but also limited by more forceful police action, media weariness, and their opponents capitalizing more quickly on their mistakes, particularly an ill-judged protest that stopped trains on London’s subway system.

In the face of the coronavirus pandemic, Extinction Rebellion, like the school strike movement, has postponed in-person protests and so is likely to disappear from public attention for a few months at least, even with online protests continuing. We cannot know what the public mood about climate change will be like when the pandemic is over, but history warns us that a boom in concern about climate change can collapse in the face of other world events. This exact pattern of events happened in the mid-2000s, when media coverage and public attention on climate change grew, only to burst with the economic collapse and the failure of the Copenhagen climate conference in 2009, not returning to its previous level for a decade.

But even if the public is exactly as worried about climate change when coronavirus concerns fade as it was before the crisis began, the enforced pause could be a good moment for Extinction Rebellion and other actors in the climate protest movements to consider what they can learn from their recent successes and failures, and to plan new approaches for when they return to the fray.

The success of Extinction Rebellion and the school strikers in attracting attention to their cause was unusual, perhaps unprecedented. My analysis of previous climate protests in the United Kingdom from 2006 to 2014 found no examples of such events triggering significant increases in media coverage, parliamentary discussions, or public concern.

The recent protest movements made it clear that large numbers of people are deeply concerned about climate change in ways that are important though varied. The striking schoolchildren could not be dismissed as typical urbanite green activists, as opponents of climate action often do with environmental protestors. While this accusation is still levelled at Extinction Rebellion, their willingness to be arrested, the large numbers who participate in the streets, and their efforts to show protestors as ordinary members of the public may have helped limit this characterization.

This seems to have increased concern about climate change among a large part of the public that I described as the “swing middle” in my book, The Climate Majority—people who have no doubts about the reality of climate change but who have tended to prioritize other, more immediate issues. The sight of many people who sound like them expressing alarm about climate change may have been important in making them reconsider their priorities. In the United States, the two key “swing” groups shrank from 55 percent of the public in March 2016 to 42 percent in November 2019, while the most concerned group grew from 17 percent to 31 percent, according to Yale University’s categorization. With these shifts, national politicians are finding growing public demand for ambitious climate policies.

But this success also contains a problem. At some point, the protestors will run out of people who can be persuaded by the sight of their peers being alarmed about climate change. The tactic can motivate people who are already persuaded that climate change is a threat and are close to supporting strong action to limit emissions; it does not change the minds of those who are less sure. Whether or not countries such as the United States and United Kingdom have yet reached the moment when the most easily persuadable people have been won over, that moment will eventually come. The tactic of “motivation through alarm” will almost certainly run out of road.

This means that the protest movements need to get better at persuading people who are not already sympathetic to them and their causes, at least if their aim is to win over more people to stronger action on climate change. This would require them to engage more with people whose values are more socially conservative; it will depend on understanding and reflecting better why other people might—or might not—care about climate change, and how policy responses can take account of their interest and needs. It might involve inviting a wider range of people to be part of the movements and allowing them to shape activism in ways that could be uncomfortable for some current activists. But it is not clear that this focus is a priority. For example, there has been much public debate about whether Extinction Rebellion is too white, but little about whether its appeal is too narrowly focused on social liberals.

Another place the movements may be reaching their limits is in their targets. So far, they have focused on high-level policy goals, such as the net-zero target, leading to a focus on disrupting everyday life to shift government policy. After the pandemic, the public might have less tolerance for further disruptions. If so, the protestors might have to shift from high-level targets to individual policies and particular polluters, such as agriculture, transport, and heavy industry. This change might meet with less public resistance as the targets will seem more legitimate, but at the cost that the protests could be less interesting to the media and public.

The recent climate protests have been remarkably successful in driving attention and political action. Whether or not the pandemic leaves a public that is less interested in climate change, the activists may anyway have been reaching the limits of what they could achieve with their tactics. The leaders of the movements could use the time to think about new audiences and targets for the future. If they do, the momentum for climate action could become even greater than it was before.

Leo Barasi is the author of The Climate Majority: Apathy and Action in an Age of Nationalism, published by New Internationalist.