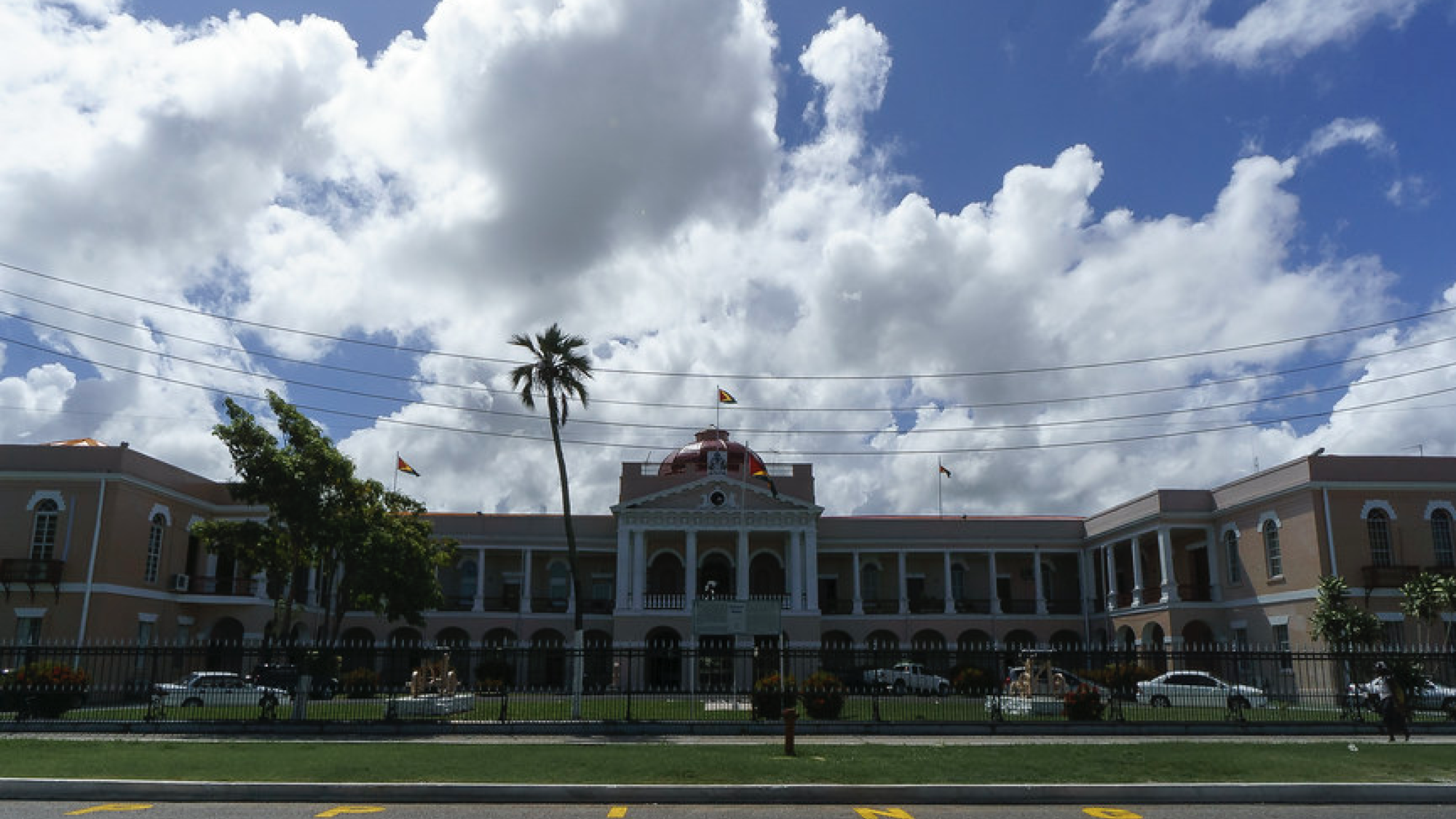 ExxonMobil and its affiliates hit the jackpot in their offshore oil exploration with the Liza-1 well discovery in the Stabroek Block in Guyana in May 2015. Multiple oil discoveries since then have unleashed the business optimism of onshore service providers and elicited significant excitement amongst the Guyanese public. Now boasting some of the highest per capita proven oil reserves in the world, production in Guyana is currently producing around 120,000 barrels per day, with ExxonMobil anticipating increasing production to at least 750,000 barrels per day by 2025.

Guyana, a small, English-speaking country of about 780,000 people in South America, comes out at the bottom of the Human Development Index ranking of the fifteen full members of the Caribbean Community and Common Market (CARICOM). Now, Guyana is on the radar of almost all the major world news and financial periodicals thanks to these oil discoveries, a change that has staggering political implications for the country.

At a hypothetical market price of around $35 per barrel, Guyana’s government is expected to receive around $206 million per year from the discovery. This is a conservative estimate given that the production-sharing oil contract allows ExxonMobil to recover in each quarter a maximum of 75 percent of the market price in fixed costs. However, given the 75 percent full cost recovery, production of 750,000 barrels per day is expected to provide an annual cash windfall to government of approximately $1.3 billion at the $35 price. To put into context how significant this development is, total tax revenue in 2018 amounted to $1.03 billion, while government expenditure was $1.18 billion.

The political party that wins the unresolved March 2020 election gets to determine how the future oil revenue will be distributed. Consequently, the cost of losing an election is higher in an oil-based Guyana. Any political contestation will emerge from ethnically-charged voting; the winning party will draw most of its votes from one of the two largest ethnic groups, while the losing party will draw its votes predominantly from the other ethnic group. Historically, Afro-Guyanese have voted overwhelmingly for the Peoples National Congress (PNC), the senior party in the coalition of A Partnership for National Unity (APNU), and Alliance for Change (AFC). On the other hand, Indo-Guyanese historically have voted overwhelmingly for the Peoples Progressive Party (PPP). Indigenous Guyanese tend to randomize their votes.

These voting patterns mean the group which forms government is usually blamed for rewarding its base at the expense of members of the losing group. This malaise results in recurring claims and counterclaims from both groups of marginalization and discrimination in government contracts, land distribution, civil service jobs, composition of the army, government scholarships, and other privileges. Such discontents precipitated the period of protracted, ethnically-charged political violence that began after the 1997 general election and continued until around 2008. In February 2002, the violence spiked after the PPP (renamed PPP/C in 1992) again won the 2001 general election. Security forces failed to stem attacks against perceived supporters of the PPP. In response to the hostility, a few members from the business community allegedly formed death squads with the blessing of the then PPP government to fight the militants, resulting in many extra-judicial killings.

Since Guyana’s independence in 1966, three political dispensations have caused conflict over the control of government resources to erupt along ethnic lines. The first came with the dictatorship of the Burnham-Hoyte PNC, a period which lasted until 1992, characterized by the introduction of the paramountcy of the party in 1973 which facilitated the ascendency of the PNC over all branches of government. Indo-Guyanese remember this period as one of marginalization, discrimination, and rapid migration.

The second came with the return to free and fair elections in 1992 with the help of the Carter Center, in which the Indian-dominated PPP won a key electoral victory given their clear numerical advantage in terms of voters at the time. Despite the transition to free and fair elections, Guyana saw only limited democratic consolidation during this time, a period tainted with persistent, tit-for-tat ethnic conflict, allegations of serious financial corruption, as well as widespread marginalization of and discrimination against Afro-Guyanese.

Most recently, a multi-ethnic coalition helped the PNC to regain power in 2015 for the first time in twenty-three years. The event caused typical political discontents, albeit mainly among Indo-Guyanese. As a result, a key coalition partner of the PNC, the AFC, lost most of its Indo-Guyanese votes back to the PPP in the March 2020 general election—the winner of which is yet to be declared because the main parties are in court contesting the alleged rigging of the Region 4 votes in favor of the incumbent APNU+AFC.

Guyana’s winner-takes-all political system clearly must be reformed to a model in which power is shared in order to address these ethnic discontents. This would diminish the cost of losing an election for all parties involved,  and would help Guyana circumvent its natural resource curse. Various power-sharing models have been suggested over the years, but the two dominant parties have been resistant to such change, which would require a new constitutional architecture to set the power-sharing conditions. Perhaps only the international community possesses the economic leverage to force change in that direction. The donor community and the Carter Center should facilitate constitutional overhaul, rather than merely observe elections. Additionally, ExxonMobil possibly could deposit royalties in an escrow account until the 2020 election is resolved.

All other political transformations can be seen as sufficient conditions or reforms. A crucial sufficient reform is the elimination of the party-list system, which allows the presidential candidate to hand pick his members of parliament (MPs). MPs should be elected in a constituency, not selected by the President. Sufficient electoral reforms are also needed to complement the necessary condition of power sharing. In order to address allegations of internal manipulation by special interests and party groups at past internal party elections, MPs could be elected directly to audited intra-party primary elections to prevent rigging at the internal level. Moreover, power sharing between the Indo-PPP and Afro-PNC should face credible electoral challenges from independent individuals. At a minimum, this requires replacing the pre-election alliance constitutional clause with post-election alliance in order to increase the degree of randomness and to minimize the race-baiting during election campaigns.

To avert backdoor spending of oil revenues that would fuel ethnically charged political discontent, another sufficient reform is needed from the realm of monetary economics. It is important that the monies in the Natural Resource Fund, Guyana’s sovereign wealth fund, are not merged with the foreign-exchange (FX) reserves of the Central Bank. A recent step by the Ministry of Finance suggests such a merging of accounts is afoot. Funds could be deposited at the New York Federal Reserve, but the oil revenues are drawn down indirectly and sold in the domestic FX market in the name of exchange-rate stability as the government continues to run a massive overdraft (implicit money printing) on its official account at the Central Bank.

Reforms must emphasize complementarities with necessary power sharing and a series of sufficient structural political and economic changes. Without the sufficient reforms, power sharing alone is likely to permanently lock out independent and innovative leaders who would likely use the oil discovery to benefit Guyana in the best way possible.

Tarron Khemraj is Professor of Economics and International Studies at New College of Florida, the honors college of the State University System of Florida. He is also a columnist at Stabroek News, Guyana, and previously was a candidate for the Alliance for Change in the 2011 Guyana election. He holds a PhD from the New School for Social Research, N.Y., and has published numerous papers in Monetary Economics and Political Economics.