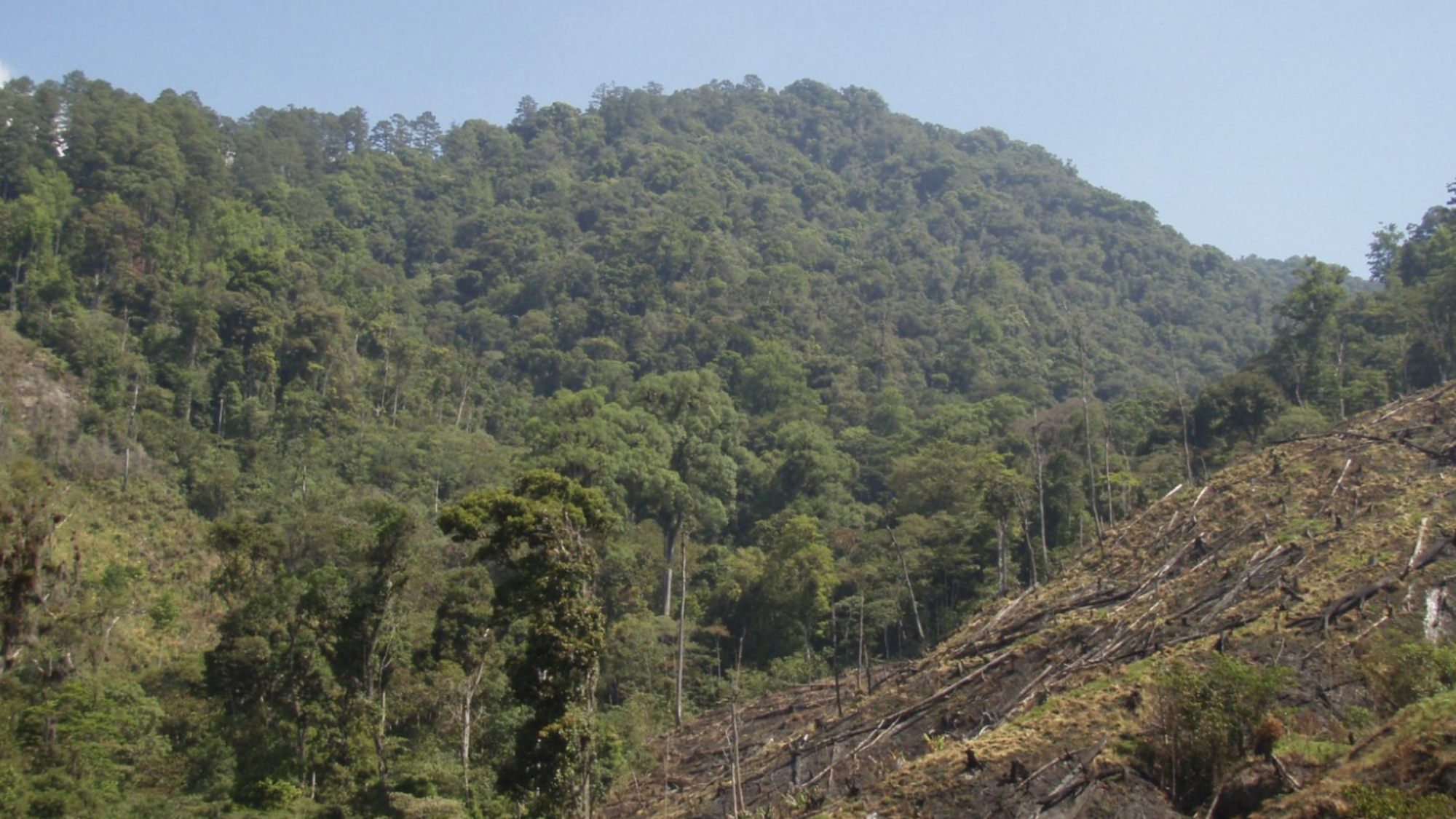 In 2010, a drug trafficking group moved into the heart of Honduras’ Río Plátano Biosphere Reserve. At gunpoint, the gang terrorized indigenous Pech and Miskitu residents into giving up their subsistence lands and ancestral rainforests. Within two years, the narcotraffickers had felled 150 hectares, about 280 football fields, and this destruction continues unabated.

Ecological destruction by narcotics traffickers is hardly unusual; similar dynamics are reported across Latin America. It is particularly widespread in Central America, however. There, it is estimated that cocaine-smuggling “narcos” have been directly responsible for 30 percent of all recent forest loss in some countries, up to 60 percent of which has been in protected areas. The associated loss of environmental services—like water and soil protection—is valued at close to $150 million annually, far more than is budgeted for protected area conservation.

Central America does not have a lot of forest left to lose. Forests in Honduras, Nicaragua, and Guatemala are particularly hard-hit. Most susceptible are the highly biodiverse, broadleaved forests of the Caribbean slopes—the very carbon-storing forests most critical for mitigating climate change. Their loss, in turn, renders the isthmus far more vulnerable to the impacts of climate change that are already being felt there: drought, diseases, and severe storms. Twenty years ago, when Hurricane Mitch slammed into northern Central America, it was already clear that deforested watersheds greatly intensified the floods and mudslides that killed over 11,000 people. Continued forest loss in the decades since ensures that Central America’s urban and rural poor will bear the brunt of climate extremes.

Of course, drug traffickers are not the only forces transforming Central America’s biodiverse frontiers. Forestlands are being cleared for the expansion of industrial agriculture, often converted first to cattle pasture, then into rapidly-expanding palm oil plantations. As regional governments increasingly pursue extraction-led economic growth models, forests are also felled for foreign-financed mines and related mega-projects, including port expansion, new highways, and hydroelectric dams.

What is seldom recognized, however, is the extent to which the drug trade itself lubricates and accelerates these other forms of frontier transformation, and the ways in which US-led counternarcotic strategies make the situation worse. In short: the drug war exacerbates Central America’s contribution and vulnerability to climate change. Here is how.

Like any logistician, cocaine traffickers seek to move drugs along the shortest routes possible. In the late twentieth century, that meant sending South American cocaine exports northward through the Caribbean or directly into Mexico. But US-supported counternarcotic operations—particularly Plan Colombia beginning in 2000 and Mexico’s war on cartels after 2006—made those routes increasingly inconvenient. So, traffickers began to route more cocaine through Central America; by 2011, about 80 percent of all the cocaine consumed in the United States was transshipped through the region.

To receive all of the cocaine-laden planes and boats landing in Central America, traffickers need remote spaces—often protected areas, indigenous territories, and landscapes of smallholder agriculture. Once there, they amass land and destroy forests because it makes economic sense to do so. Not only does it allow traffickers to secure land routes from rivals and otherwise enhance the efficiency of transshipment, but rural land is also a lucrative and convenient way to launder dirty cash. That’s because traffickers can buy land in remote rural areas cheap, and they can sell it dear to the many actors, legitimate or otherwise, keen to invest in this new speculative land market.

It almost goes without saying that traffickers’ ability to illegally buy and sell “protected” land, and to do so with impunity, relies on the complicity of state actors at every level. That complicity runs deep—forged decades prior with the help of US covert operatives looking to raise cash to overthrow Nicaragua’s Sandinista government. The relationship between drug traffickers and Central American states has only deepened since, evidenced by the ongoing willingness of military, police, judges, and politicians to look the other way, for a price. Indeed, so entrenched are these relationships that it can be hard to tell state actors apart from traffickers. Recent US government prosecutions make clear, for example, that politicians in Honduras not only benefit from cocaine traffickers’ largesse, but they participate actively in the trade themselves.

These are the same corrupted and interconnected elites that benefit handsomely from the opportunities created when traffickers make frontiers “open for business”—that is, available to entice domestic and foreign investment in agribusiness, mining, and other big projects, including “climate-friendly” hydroelectric dams. These profit-driven enterprises compound Central America’s “growth without development.” In other words, they may spur macro-economic indicators of modest growth, but they can undermine social development by aggravating wealth and income inequality, rural dispossession, unemployment, and declining agricultural productivity.

US taxpayers currently spend billions of dollars per year on the government’s multi-agency effort to intercept cocaine shipments that typically land first in Central America. The United States spends millions more to encourage, equip, and train “partner nations” to help with this counternarcotic mission. The stated goal is to make cocaine scarce and expensive in the United States. In reality, it does neither, and never has. In Fiscal Year 2018, for example, counternarcotic forces intercepted only 6 percent of all known cocaine shipments in the Caribbean/Central American transshipment corridor, while cocaine production in Colombia has surged to unprecedented levels.

The real consequences of all that drug war spending are often called “unintended,” but it is more accurate to describe them as both predictable and perverse. For example, chasing the traffickers who are moving cocaine out of northern South America ensures that they stay perpetually agile, penetrating and destroying ever more forests and rural landscapes in Central America and elsewhere. Additionally, the United States’ drug war aid to Central American governments will never be enough to compete with traffickers’ bribes. Thus, the same administrations that swear fealty to the US counternarcotic mission—and therefore receive funding, military training, weapons, and other support—are simultaneously, predictably, and generously corrupted.

The outcomes are hardly surprising. Rather than seriously tackle corruption or trafficking, several crooked administrations have used the United States’ diplomatic support and aid to their military and police to violently repress those who criticize them, and to bolster paramilitary and private security forces who protect stolen lands. Citizens who dare to stand up for forests and who stand in the way of extractive projects and elite land grabs are harassed, imprisoned, and killed. It is often hard to know exactly who is responsible for the abuse and murders of indigenous people, campesinos, and environmentalists, as well as those of the lawyers who represent them and the journalists who cover them. Were the rapes and killings ordered by drug traffickers, police, military, mining consortia, energy companies, or rich landowners? Whoever is orchestrating the brutality, several things are clear: the interests of all these groups are deeply aligned, they operate with near impunity, and the outcome is the same: Central America is one of the deadliest places in the world in which to be an environmental defender.

So, the drug war is contributing, directly and indirectly, to the loss of Central America’s forests, with dire climate change consequences. Recognizing this linkage helps to illuminate policy options that might otherwise appear unconnected. A crucial place to start is to support legislative efforts in the United States—such as the stalled Berta Caceres bill—that would suspend police and military aid to governments guilty of egregious human rights abuses. A complementary approach is to finally and seriously re-assess the basic logics of supply side strategies in the drug war. The billions currently wasted each year in the futile effort to keep cocaine out of Central America can instead go towards non-militarized solutions to fight the effects of drug trafficking there. That includes meaningful multilateral anti-corruption initiatives and programs to fight impunity and (re)build the legal institutions required to investigate and prosecute crimes.

These efforts must also go hand-in-glove with sustained, serious, and multilateral support for indigenous and campesino groups’ varied and courageous efforts to govern their own lands and territories and to shore up their climate resilience. In Central America, mitigating and adapting to climate change requires protecting and supporting those who are already living and dying in defense of the region’s lands, rivers, and forests.

Kendra McSweeney is a professor of geography at Ohio State University who has conducted research on relationships between people and forests in Central America since 1992.