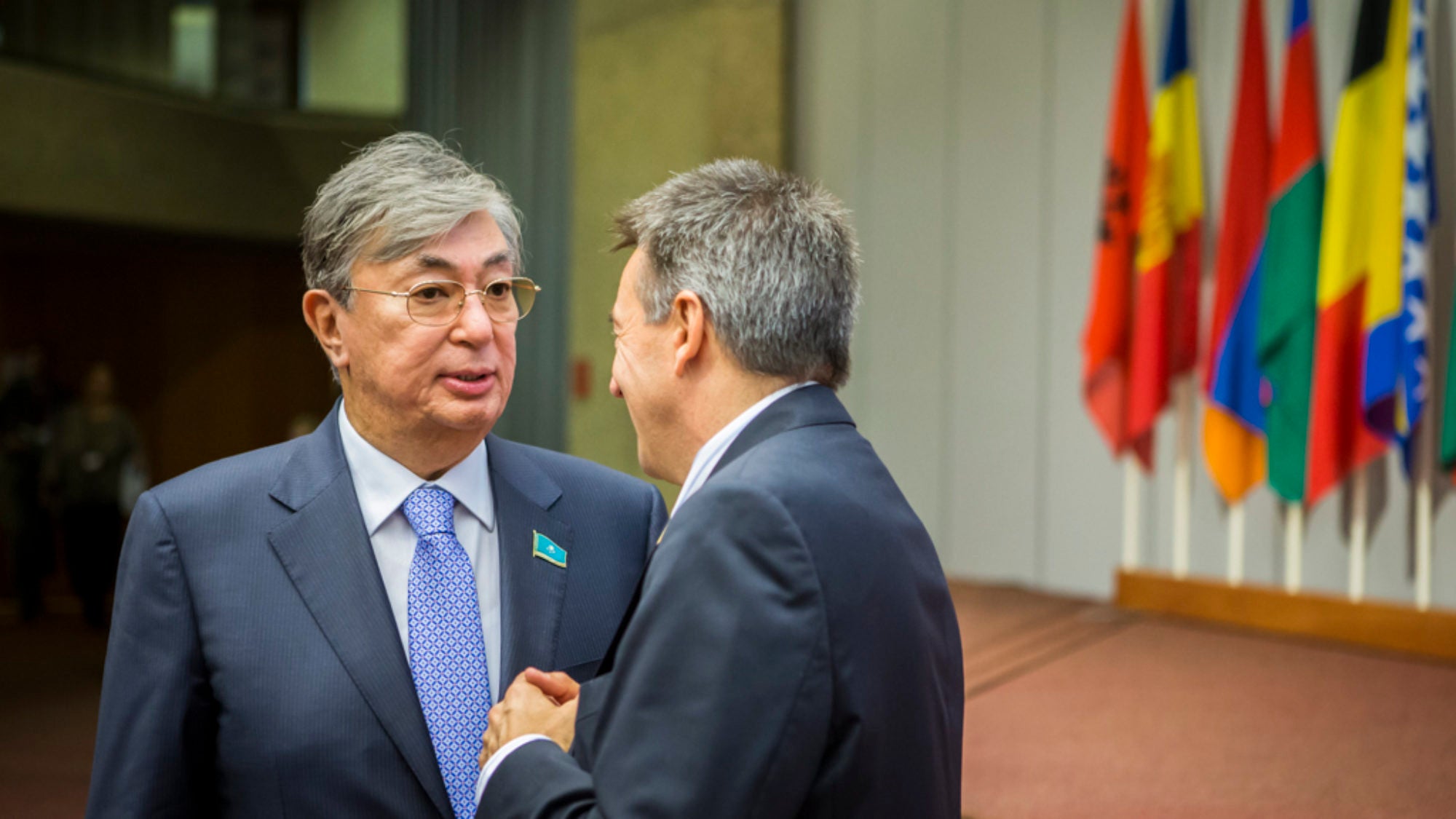 Title: The Future of US-Kazakhstan Relations

Since achieving its independence after the fall of the Soviet Union, Kazakhstan has maintained warm relations with the United States. The country regards the United States both as a potential source for trade and investment and as a partner to balance the influence of Russia and China in Central Asia, a perspective which underlines the importance of US Secretary of State Mike Pompeo’s February visit to Kazakhstan and Uzbekistan. During the visit, Pompeo was generous in his praise for Kazakhstan and highlighted the importance of bilateral ties, while criticizing China’s detention of hundreds of thousands of Uyghurs, Kyrgyz, and ethnic Kazakhs in so-called “re-education” camps.

In the post-COVID-19 world, the US government should implement more initiatives to further strengthen ties with Kazakhstan, as the pro-US attitude of its government and the country’s geostrategic importance make the Central Asian nation a valuable partner for the United States.

A Summary of Bilateral Relations

US-Kazakhstan relations are cordial. While there is no “special relationship” between Washington and Nur-Sultan (Kazakhstan’s capital) the two governments enjoy robust diplomatic and trade relations and occasionally meet at the presidential level. President Trump met with Kazakhstan’s former leader Nursultan Nazarbayev in Washington in January 2018 and again with the current president, Kassym-Jomart Tokayev, at the United Nations General Assembly in New York in late 2019. Other high-level diplomatic meetings have also occurred between the two governments. For example, Undersecretary of State for Political Affairs David Hale and Secretary Pompeo both attended meetings of the C5+1 (the five Central Asian states plus the US) during their respective visits to Nur-Sultan.

There are a few issues that figure prominently in the US-Kazakhstan relationship, chief among them Afghanistan. Kazakhstan has helped the United States’s efforts there both by financing Afghanistan’s security forces and by participating in Afghan transportation infrastructure development projects, according to the White House. Moreover, Kazakhstan and the United States maintain an informal defense partnership. Under the State Department’s Global Peace Operations Initiative, Kazakhstani troops have been trained as peacekeepers, and Nur-Sultan sent its first-ever major deployment to the UN mission in Lebanon, UNIFIL, in November 2018, while a new contingent of 120 troops was deployed in November 2019.

It is worth noting that this stable partnership commenced shortly after Kazakhstan gained its independence from the Soviet Union in 1991. At the time, the US assisted Kazakhstan in its denuclearization process, during which it helped Kazakhstan remove warheads, weapons-grade nuclear materials, and supporting infrastructure. Under the Cooperative Threat Reduction Program, the United States spent $240 million to assist Kazakhstan in “eliminating weapons of mass destruction and weapons of mass destruction-related infrastructure,” explains a 2016 State Department report. In other words, Kazakhstan is no stranger to policymakers in the White House, Capitol Hill, and the Departments of State and Defense.

Finally, trade between the countries is substantial, reaching $2.1 billion in 2018. To put this amount into perspective, trade between the United States and Uzbekistan, the region’s second largest economy, was only $315 million during the same period. In light of Kazakhstan’s role as the United States’s most significant trading partner in Central Asia, the country should be of continuous interest to US trade officials.

Overall, the three-decade history of US-Kazakhstan relations has been constructive, with the two governments cooperating on a variety of timely and relevant issues. As an example, Kazakhstan has provided an effective model and source of expertise for the deradicalization and reintegration of former members of terrorist groups, a fact that has not gone unnoticed in Washington. Certainly, there are areas which the two governments can take bilateral relations to the next level.

The New US Strategy for Central Asia

It is fair to say that apart from Afghanistan, the United States has given limited attention to Central Asia as a region following the end of the Cold War. However, the long-awaited United States Strategy for Central Asia 2019-2025: Advancing Sovereignty and Economic Prosperity (published this past February) describes how the United States can achieve closer ties with the region. The strategy details Washington’s interests in seeing Central Asian states “expand and maintain support for stability in Afghanistan” and “reduce terrorist threats” while “promot[ing] United States investment in and development” in the region, among other goals.

Given the fact that three Central Asian states (apart from Kazakhstan) border Afghanistan, the region as a whole maintains a strong interest in fostering stability there. To that end, Kazakhstani and Uzbek universities train Afghan medical and engineering students, including Afghan women. Kazakhstan further demonstrated its commitment towards this goal by hosting a 2018 conference which focused on the empowerment of Afghan women; the gathering was held in Nur-Sultan. Of course, long-lasting development can only occur when there is no violence, so the situation in Afghanistan remains complicated in spite of the recent peace deal.

Terrorism also remains a critical threat in Kazakhstan, as citizens from Central Asia, including Kazakhstanis, have left to Syria to fight for insurgent movements. Through Operation Zhusan, Kazakhstan has taken the lead in the repatriation and re-integration of battle-hardened Kazakhstani nationals and their families. During a presentation at George Washington University in late January, Dr. Yerlan Karin, an advisor to President Tokayev, explained that 524 Kazakhastani citizens had returned between January and May 2019 as part of Zhusan. While there is concern that some of these individuals might continue to engage in terror-related activities at home, so far the situation remains stable. Additionally, Zhusan demonstrates that Central Asian governments are very aware of these terror threats and are applying their own solutions to address the problem.

Recommendations for the Post-COVID-19 World

Globally, economic and diplomatic initiatives have come to a halt due to the COVID-19 pandemic. Nevertheless, there are several areas in which bilateral ties could improve in the post-COVID-19 world.

The first possibility is a visit by the US president to Kazakhstan to meet with the country’s leadership, as well as other Central Asian heads of state under the C5+1 forum. This hypothetical US-Central Asian presidential summit held in the Kazakh capital would be a strong symbolic gesture, as it would demonstrate Washington’s commitment to establishing a more high-profile presence in the region and would also highlight how the US sees Kazakhstan as a geographically distant, but important, partner. Moreover, such a meeting could encourage greater defense cooperation, under the C5+1 umbrella, towards Afghanistan.

Second, with regard to trade and investment, the Kazakhstani government signed an agreement last December with Tyson Fresh Meats, Inc. to build a “modern beef processing plant… with an anticipated harvest capacity of 2,000 head per day,” in Kazakhstan. While the United States cannot realistically match China’s or Russia’s economic presence in Kazakhstan, increased investment partnerships, perhaps under the umbrella of the US International Development Finance Corporation, would help not only the Kazakh economy but also enhance US soft power.

This deal is particularly significant as Nur-Sultan is striving to diversify not only its pool of commercial partners and investors, but also decrease the economy’s overall dependence on its energy sector. Having an international meat-producing company set up shop in Kazakhstan marks an important achievement for the Tokayev presidency as the Tyson plant will not only provide jobs to Kazakhstani workers but it will also boost the country’s economy. Moreover, some industry reports state that products made at this facility could be exported to Uzbekistan and Western China, thereby cornering the region’s meat market.

Lastly, Kazakhstan is attempting to become a trilingual nation, introducing English alongside Russian and Kazakh. Thousands of Kazakhstani students have attended US universities. The United States and partnering universities should send professors and students to Central Asia to further promote English-language education and strengthen people-to-people relations. Such efforts will help increase the knowledge of the distant, yet geopolitically important, region that is Central Asia and develop a new generation of US experts in Central Asian affairs. By focusing on a long-term strategy like educational partnerships, in the future we will see more comprehensive initiatives between Central Asia and the United States in general, and stronger US-Kazakhstan relations in particular.

Secretary Pompeo’s trip to Kazakhstan and Uzbekistan occurred at a time when the two Central Asian powerhouses are seeking to diversify their pool of allies. While it may be difficult to expect a new “special relationship” between Washington and Nur-Sultan given the former’s other priorities, the US government, along with US industries and academic institutions should view Kazakhstan not as a remote nation, but rather as a partner that is central to US interests.

Wilder Alejandro Sanchez is an analyst based in Washington, DC who focuses on geopolitical, defense, and cyber security issues in the Western Hemisphere and post-Soviet regions. The views expressed in this article belong to the author and do not necessarily reflect those of any institutions with which the author is associated.