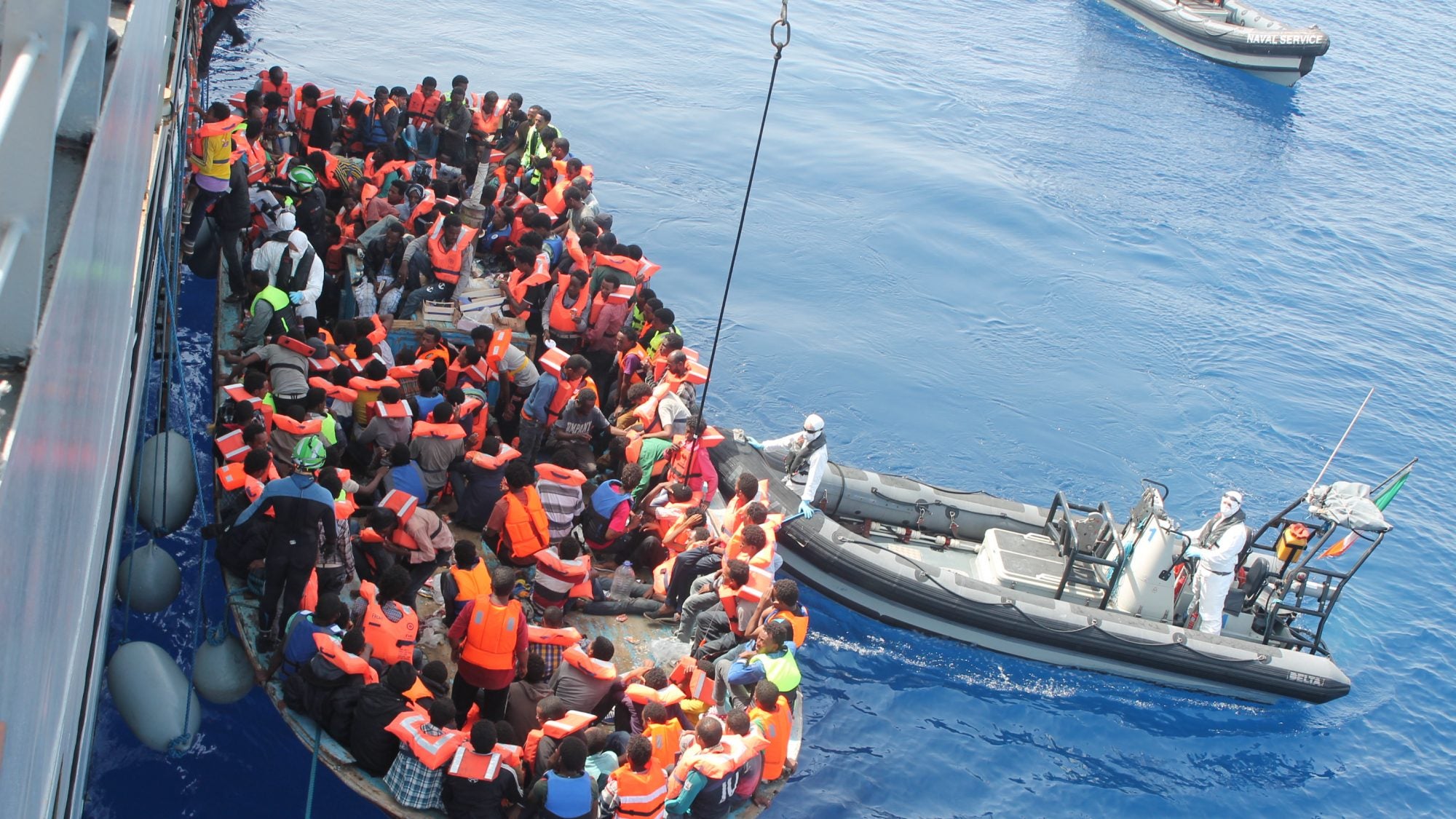 Global migration flows have increased over the last couple decades. Climate change is a key driver of these flows and will become more important in the future. Foreign aid programs, often intended to manage or even reduce these flows, are typically not large enough and lead to more rather than less migration.

Various countries that received large inflows of migrants and refugees over recent years have implemented policies intended to manage and, often, reduce these flows. These policies are often targeted to reduce undocumented migration and the flow of refugees. The European Union, for example, started fighting human traffickers and set up additional pathways for documented migration.

The driving forces of migration are dynamic and increasingly complex. They can broadly be classified into three categories: socioeconomic, political, and climate-related. Socioeconomic factors include, for example, employment and income. Political factors include freedom and security (i.e., conflict). Climate factors such as temperature and weather-related disasters (e.g., storms, droughts, floods, and extreme temperatures) have been shown to affect migration and have received increasing attention from policymakers and academics. Further, there is growing evidence linking climate change to concomitant increases in conflict and migration.

The largest net-emigration countries are low-income and located in Asia and Africa, for example, Syria, India, Bangladesh, and Sudan. Low-income countries are more likely to suffer from the impacts of climate change as they have weaker recovery mechanisms such as insurance, mobility within the country, and social protection programs.

Therefore, as the impacts of climate change continue to increase, migration flows driven by climate are likely to increase as well.

One of the drivers of climate migration is weather-related disaster. The 2020 Global Risk Report by the World Economic Forum argues the top five most likely risks to the economy and society are all environmental factors such as extreme weather or climate-action failure.

Global temperatures continue to rise, with the past five years being among the five hottest years ever recorded. For example, 2019 was the second hottest year on record. Global annual temperature anomalies, i.e. deviations of annual temperature from its long-run trend, have been increasing since 1980 and are now at roughly 0.8 degrees Celsius. Moreover, extreme weather events have recently occurred in every region of the world: droughts in the Horn of Africa and Brazil, heat waves in India, wildfires in Australia, floods in Bangladesh and China, and severe storms in Europe and North America.

According to the National Oceanic and Atmospheric Administration, weather and climate disasters in 2018 and 2019 generated losses exceeding 136 billion dollars and had a total cost of more than 1.75 trillion dollars between 1980 and 2019. Data shows roughly a 300 percent increase in the number of disasters since 1980 and an increase in their likelihood and severity.

Climate change can lead to migration through various channels, first, via increased agricultural income risk. Second, climate change leads to increased food insecurity and larger health risks. Finally, increasing resource scarcity, especially water, can lead to civil unrest and allocative conflicts. These effects will be particularly strong in low-income countries that have pre-existing vulnerabilities and weak recovery mechanisms. Climate change is likely to initially increase movement within the country (typically from rural to urban locations), followed by increases in international migration towards the global north.

Given these underlying trends and especially since the number of refugees and undocumented migrants have rapidly increased during the European Refugee Crisis, addressing the root causes of migration and refugee flows has become a common policy goal across countries.

Policy examples include the UK’s Department for International Development aid payments (121 million pounds over five years from 2017 to 2022) to Sudan targeted at reducing migration to the UK and the European Union spending roughly 50 billion euros on international aid to Europe. The Trump administration in 2018 promised billions of dollars to Central America and Mexico to reduce undocumented migration and foster economic growth in migrants’ origin countries.

Generally, we find that foreign aid is an ineffective policy tool to manage migration flows. This result particularly holds true in the short run, when countries react to increased migration flows, for example in the European Union, by increasing foreign aid.

An important, and yet mostly ignored issue in this field is the question of how foreign aid is spent. Research shows that spending on different categories will have different impacts on economic growth. For example, spending on education or infrastructure will have different effects compared to spending on the military. Foreign aid will likely affect the various drivers of migration differently. This issue deserves more attention in the future and could lead to important policy recommendations.

What is needed is a long-run development strategy, developed together with the global north (destination countries) and global south (origin countries), that discusses the role of foreign aid in addressing the root causes of migration flows such as unemployment and increasing global income inequality.

Besides the development of multilateral development programs, it is also crucial to create an international framework that addresses the diverse aspects of climate-induced migration. For example, the government of New Zealand has recently proposed a visa category for Pacific Islanders displaced by climate change.

The idea of a climate refugee visa is not new but is legally complex. The 1951 UN Refugee Convention (and the 1967 Protocol) grants refugee status to people forced to flee a country because of persecution, war, or violence. Climate or environmental factors are not currently included in these categories despite substantially contributing to each of these challenges.

The fundamental problem is that not every storm or drought is caused by climate change and, therefore, identifying climate as the driving force of migration is difficult.

Besides trying to avoid climate refugees by supporting affected countries in their climate change mitigation efforts with foreign aid, policymakers should also begin to include climate change in their international migration agreements and refugee policies. The consequences of not doing so could be disastrous for future generations.

The scientific results and conclusions, as well as any views or opinions expressed herein, are those of the authors and do not necessarily reflect the views of NOAA or the Department of Commerce.

Dennis Wesselbaum is a Senior Lecturer at the University of Otago and the Editor-in-Chief of the New Zealand Economic Papers. His research activity is split between macroeconomic topics and the interaction between climate, environment, and society.

Michael D. Smith is an Economist at the National Oceanic and Atmospheric Administration. He conducts research on topics related to climate change, development, and food security.

Shannon N. Minehan is a postgraduate student at the University of Otago. Her research interests include migration, environmental economics, and fiscal policy.