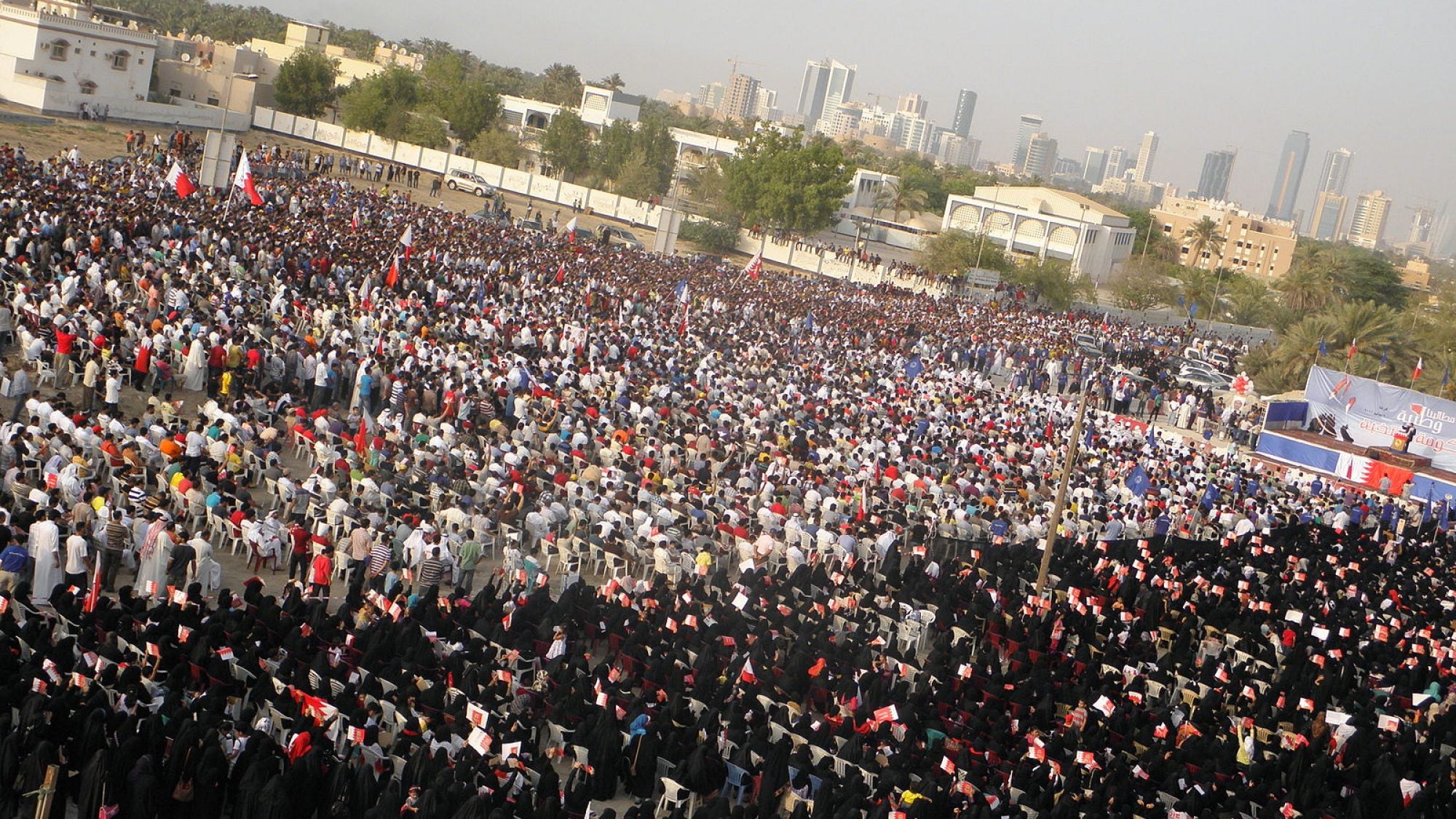 Title: Bahrain and the Conundrum of Democracy Promotion

As the Biden administration appears to recommit to a foreign policy based on democracy and human rights, Bahrain offers a stark reminder of the difficulty of pursuing such a policy consistently.

Bahrain, a tiny island state off the coast of Saudi Arabia in the Persian Gulf, is a serious violator of human rights and good at pledging to mend its ways without following up on the promises. It also hosts a large US military base, housing the Fifth Fleet and the related Naval Forces Central Command. These forces are responsible for a small but crucial area that includes the Red Sea, the Gulf of Oman, the Persian (or Arabian, depending on your interlocutor) Gulf, and a small segment of the Indian Ocean. The area also includes three major choke points, the Suez Canal, the Straits of Bab el-Mandeb, and the Strait of Hormuz, making it of vital importance to international security and freedom of navigation.

Any US policy toward Bahrain thus requires a balancing of “hard” security interests and “soft” moral interests. In the long run and under the best of circumstances, the prevailing of democracy and human rights would translate into the protection of hard security interests, providing the United States with a stable and morally irreproachable ally. But ideal conditions rarely prevail and in the short run: a policy sanctioning Bahrain for its human rights abuses and undemocratic practices could result in instability and possibly the loss of a critical base. Furthermore, while other countries, Qatar for example, would likely be willing to host a US military facility, the tension between values and interests would continue no matter where the base was relocated. There are no democratic countries respectful of human rights in the region where the Fifth Fleet operates.

Bahrain is a particularly poor candidate for reform because it suffers from a built-in conflict between the Shia majority population and a Sunni royal family dependent on Sunni organizations seen as anathema in the rest of the region. The Muslim Brotherhood and other Islamist groups, condemned as terrorist elsewhere, support the monarchy because they feel threatened by the Shia majority they accuse of being backed by Iran. The issue of reform is thus inextricably tied to sectarian conflict.

In February and March 2011, as many Arab countries erupted, Bahrain experienced its own uprising. The protesters demanded democracy and thus the rewriting of the constitution to turn the country into a constitutional monarchy—only a radical minority demanded that the country becomes a republic. But the protests’ leadership came from the same Shia clerics who had led the opposition in parliament and probably most of the protesters were Shia, like the majority of Bahrainis. For over a month the country was in turmoil, with the protests ending in violent repression supported by troops from Saudi Arabia and to a lesser extent other members of the Gulf Cooperation Council (GCC) on March 14.

As Middle East violence goes, the Bahrain episode was relatively modest. An official report by an Independent Commission of Inquiry set up in July concluded that thirty-five people had died between February 14 and March 15, not all at the hands of the authorities. Yet, the government met with enough international opprobrium to prompt the establishment of the independent commission, hailed by many as a “turning point” for human rights in the region when it issued its report in November. The report was painstakingly detailed and quite credible, but it was not a turning point because the government did not follow up on the recommendations. Of the twenty-six reforms the government was supposed to implement within five years, only five had been carried out by 2016, as a State Department report concluded.

The government and royal family tried to project the image of a country determined to solve its political problems and open up its political system, but the reality was quite different. Political activity became further restricted, with the imprisonment of many prominent leaders and activists, as well as the dissolution in 2016 of the al-Wifaq National Islamic Society, de facto the major political party (parties are officially banned in Bahrain, and political societies take their place). Al-Wifaq regularly won most of the elected seats in the parliament (half the members are appointed) and was vital to ensuring a degree of popular representation, particularly for Shias. Sheikh Ali Salman, a Shia cleric devoted to non-violence who served as al-Wifaq’s head, was first arrested in 2017. He was tried then and several times later on ever-changing charges, and finally given a life sentence in 2018 to the condemnation of Amnesty International and other international human rights organizations. Numerous other prominent civil society activists were also arrested and tried repeatedly for advocating political reforms to which the government was supposedly committed, following the recommendations of the Independent Commission.

The government also sought to curb its opponents by manipulating citizenship. The Sunni population, and even the Muslim Brotherhood, had reliably supported the government, which thus sought to increase the number of Sunni citizens by facilitating the naturalization of Sunni workers residing in the country. It is impossible to know whether and, if so, to what extent naturalizations have changed the Shia-Sunni balance, widely estimated in 2011 to be 70/30. The naturalizations probably had some impact— the last Bahrain census that asked questions about religious affiliation took place in 1941 and since then all figures have been educated guesses. In another move that sparked strong condemnation from human rights defenders, Bahrain repeatedly revoked the citizenship of individuals seen as regime opponents—most of them Shias. Over a thousand people have been deprived of citizenship since the uprising, a small number in absolute, but significant in a total population of around 650,000.

Much to the government’s discomfiture, human rights violations in Bahrain continued to receive international attention as a result of the publicity surrounding Formula One car races repeatedly hosted by Bahrain. Human Rights Watch and other organizations took advantage of the attention the country was receiving to denounce the continuing human rights violations. Human rights defenders organized demonstrations, petitioned the sponsors to move the races elsewhere, lectured the authorities, and encouraged some of the most prominent drivers to speak up on the issue. None of these steps succeeded in either having the races moved to a different venue or in convincing the government to improve its record, but they embarrassed the authorities by calling attention to a problem they claim is now behind them.

The United States between Security and Moral Considerations

In the international chorus of condemnation, the voice of the United States has been noticeably muted. Successive administrations have been cautious in their criticism and quick to hail even minor signs of improvement. The annual State Department human rights reports are somewhat critical but not highly condemnatory, careful to attribute negative comments to human rights organizations. The US record of arms sales since 2011 is even more telling about US efforts to walk a narrow line between acknowledging Bahrain’s poor political and human rights record and maintaining good relations with a country that has been designated as a major non-NATO ally since 2002. The United States suspended arms sales to Bahrain in the wake of the uprising, for fear that US-provided weapons would be used against civilian demonstrators, but sales on some items were lifted in May 2012. In 2017 the Trump administration lifted almost all restrictions and in May 2018 approved new sales.

Bahrain’s gentle treatment is due not only to the importance of the military base but also to the close relationship between Bahrain and Saudi Arabia, a country that always figures prominently in US-Gulf policy, and with which the Trump administration developed particularly close relations. Saudi Arabia has become Bahrain’s primary provider of security and economic assistance—Bahrain’s oil reserves are small and dwindling and its defense forces are also limited by its population size. A third reason for Washington’s leniency toward Bahrain is the latter’s decision to establish diplomatic relations with the state of Israel in 2020.

This leniency is likely to continue under the Biden administration. In theory at least, the administration is committed to a foreign policy that gives more importance to the values of democracy and human rights. Furthermore, relations between Washington and Riyadh have become much more contentious. But the military base is still there and the region is in greater turmoil than ever. Bahrain will remain a conundrum for US foreign policy, illustrating once again the tension between values and interests that is inevitable in foreign policy.

Marina Ottaway is a Middle East Scholar at the Woodrow Wilson International Center for Scholars. Prior to joining the Center, she helped found and directed the Middle East Program at the Carnegie Endowment for International Peace. Her latest book is A Tale of Four Worlds: The Arab Region After the Uprising (Hurst Publishers and Oxford University Press, 2019) co-authored with David Ottaway.