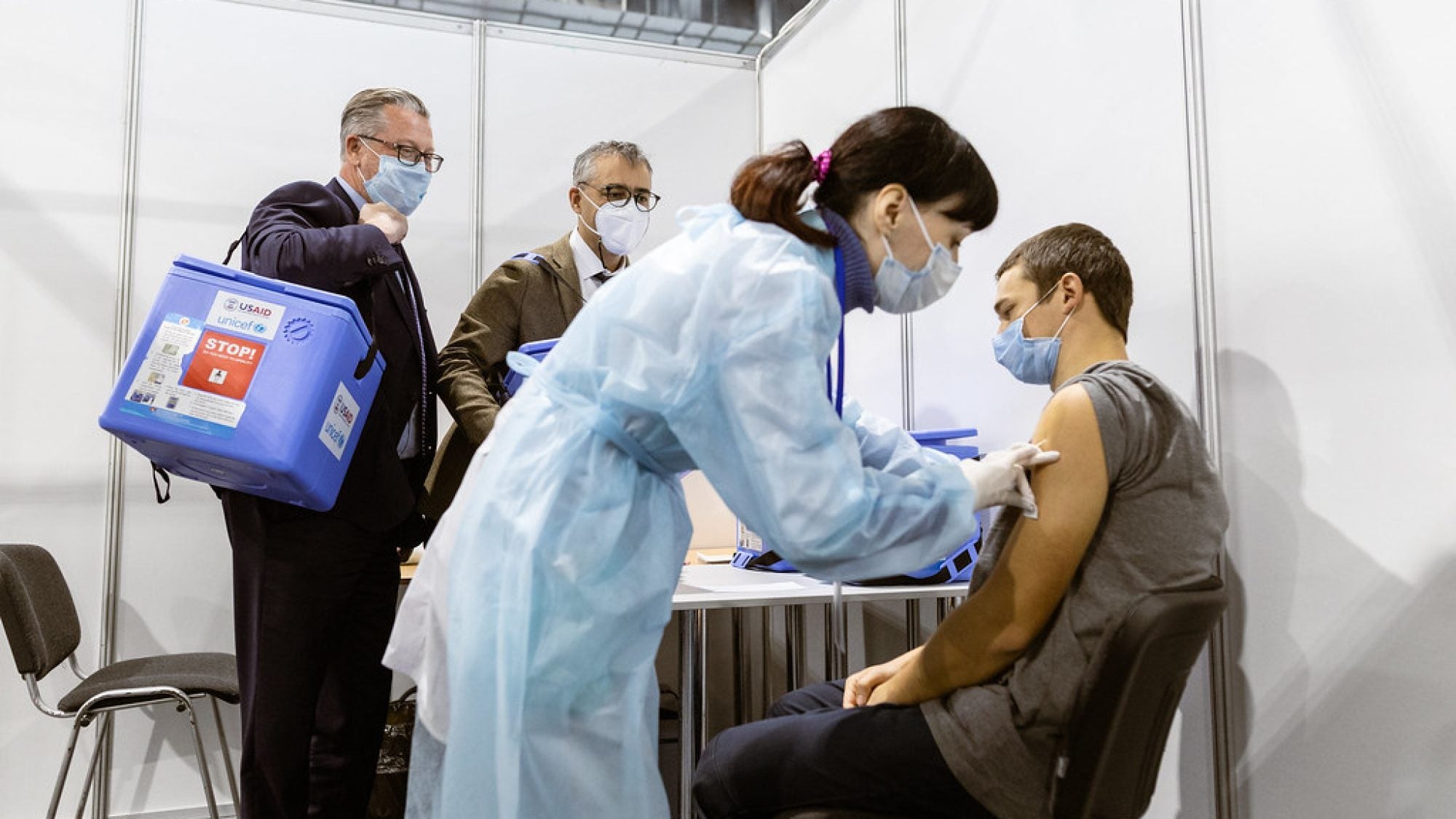 The international focus centering on Ukraine’s military response to Russian aggression must not lose sight of the crises in the Ukrainian healthcare in the short term (COVID-19) or mid-term (enhancing capacity and improving access). State provision of healthcare is a priority for Ukrainians but suffers from persistently low satisfaction. Continued prioritization of international assistance to Ukraine’s healthcare sector can improve state capacity, add resiliency to its vulnerabilities as a disinformation target, contribute to Ukraine’s long-term security, and assist with the current escalation of healthcare needs.

Vladimir Putin’s bellicose political posturing, role in supporting conflict in the Donbas, veiled nuclear threats, and questionable charges against NATO aggression culminated in an invasion of Ukraine on February 24, 2022. The invasion has, rightly, focused the attention of the European Union (EU) and NATO on immediate military aid for Ukraine. However, armament and military support should not distract attention from other areas of escalating human security needs, namely healthcare. Among international donors, it is critical to prioritize the provision and delivery of medical supplies, provide financial support for healthcare providers, and protect healthcare access and treatment locations. Pre-existing challenges in Ukraine’s healthcare system, the massive damage generated by Russia’s invasion, and concerns about Russia’s disregard for international norms in relation to humanitarian infrastructure (based on actions in Syria and early reports from the current conflict), demand that bilateral donors and multilateral organizations provide immediate and comprehensive support programs to Ukraine’s healthcare system. Critical military needs must not crowd out healthcare needs when directing sustained international assistance.

Domestic resolve and resistance to the Russian invasion, and Ukrainian support for President Zelensky are impressive. Yet, the rally to defend the country now does not erase years of dissatisfaction with government attempts to fight corruption or enhance economic opportunity or calls to improve healthcare. Aggressive support from the international community for Ukraine’s healthcare system offers a pathway to meet current and emerging challenges and begins to address past areas of domestic dissatisfaction. Healthcare assistance can contribute to positive perceptions of capacity, strengthen the perceptions of citizens toward the state, provide vital support for casualties from the conflict, support medical service for residents living with chronic disease, and assist in addressing the ongoing COVID-19 pandemic in Ukraine and surrounding regions.

The popular protests which ousted Kremlin-backed former president Viktor Yanukovych, 2014’s Revolution of Dignity, was rapidly followed by the Russian annexation of Crimea and Russian-backed separatist movements in eastern Ukraine. The latter incursion generated independence claims from the Donetsk People’s Republic (DPR) and the Lugansk People’s Republic (LPR) in the Donbas. Since 2014, Russia has disrupted territorial control, supported armed conflict in eastern Ukraine, threatened energy across the region, and waged disinformation campaigns concerning Ukrainian public services, including healthcare. For example, the hashtag #VaccinateUS, linked to Russian troll activity, sought to deepen discord concerning measles vaccines in Ukraine, intensifying the decline in measles vaccination coverage in Ukraine from 98 percent in 2008 to 31 percent in 2016. The Ukrainian government and people already had to contend with serious challenges as the Soviet-era Semashko system left a legacy of highly specialized outpatient care, underpaid healthcare workers, high out-of-pocket costs, and a focus on procedures over health prevention. Healthcare proved an effective target for disinformation campaigns, fostering discontent and dissatisfaction with state services.

Post-Soviet Ukraine inherited a population with high expectations for national healthcare, and significant levels of chronic illness. In 2000, attempts to reform payment procedures and increase transparency failed to generate adequate incentives for healthcare facilities or providers. Survey results, from 2012, estimated Ukrainian satisfaction with state healthcare at 2.9 on a scale of 0 to 10. Later improvements in Ukraine’s healthcare system have been linked to the tenure of Ulana Suprun (2016-2019) who, as acting Minister of Health, sought to standardize payments, expand primary care, and improve emergency services. Suprun garnered praise from the international community but was vilified by members of political parties who opposed healthcare reform. By  2018, popular satisfaction with healthcare had improved, particularly among families engaged in the program which assigned primary care physicians to every family. Despite Ukraine possessing the highest HIV burden and fourth-highest level of tuberculosis infection in the European Region of the World Health Organization, the progress made in financial transparency, access, and satisfaction in healthcare was promising. This was quickly knocked back by COVID-19 and further damaged by the Russian invasion.

With over 44 million residents, Ukraine reported just over 5 million confirmed COVID-19 infections and a COVID-19 death rate of over 250 per 100,000. While specific rates are closely tied to testing, demographic characteristics, healthcare, and other factors, Ukraine’s COVID-19 death rate is lower than neighboring Poland (295.85 per 100,000), and the US (291.9 per 100,000) but slightly higher than Russia (240 per 100,000). From the start of the pandemic, social media platforms linked to Russia allegedly fueled vaccine hesitancy campaigns. Reflecting national hesitancy, vaccination adoption has been limited, with approximately 35 percent of the population fully vaccinated as of early 2022, markedly lower than Russia (51.8 percent) and post-invasion refugee destinations of Poland (58 percent) and Hungary (63 percent). The closure of several border checkpoints between government-controlled regions and the DPR/LPR due to COVID-19 concerns during the pandemic heightened regional separation. Frustration with governmental responses to COVID-19, including testing capacity, hospital availability, masking, and school closings continued to drive dissatisfaction with Ukrainian healthcare.

By the twentieth day of the invasion, approximately three million refugees have left Ukraine with up to an additional two million refugees projected to flee. Estimates of internally displaced persons are growing rapidly and are projected to reach nearly seven million. Massive displacement increases the importance of knitting together the core issues of human security, health diplomacy, and public health as global concerns. Balancing these concerns is not new to Ukraine. Registered displacement from Donbas peaked in 2016, remaining at just over 1.4 million people in 2021. This displacement raised concerns over Ukraine’s regional healthcare capabilities, as early estimated losses of health care professionals in government controlled regions of the southeast ranged from 30 to 70 percent during the early years of the conflict. As the COVID-19 pandemic grew during 2020-2021, officials in non-government controlled DPR and LPR encouraged bans against international health agencies and focused on internal and Russian-provided healthcare for their residents. Simultaneously, the Ukrainian government placed responsibility for healthcare in the breakaway regions on Russia, who had targeted Ukraine with propaganda against COVID-19 vaccines, amplified COVID-19 conspiracy theories, and continued to provide negative messaging on the quality of Ukraine’s healthcare services and supplies, well before the latest invasion in February 2022.

Broad-based and immediate investments by EU and NATO member states, as well as other donors, are needed to mobilize the secure delivery of health supplies, support providers, and secure treatment sites in urban areas devastated by Russian missile attacks. The consequences of failing to meet the needs of the Ukrainian health sector in the short term are dangerous in light of dire projections of a possible fifty thousand civilian deaths, the difficulty of maintaining access to thousands requiring treatment for HIV infection and the tens of thousands living with chronic conditions, and the continuing threat of the COVID-19 pandemic. Eastern Ukraine is already weakened from years of conflict-related damage to healthcare and humanitarian infrastructure, and the shelling of hospitals currently extends across the south, north to Kyiv, and across other major cities.

Assistance from key donor states, including the United States, international actors such as NATO, humanitarian non-governmental organizations, and where possible, UN agencies, must focus attention on supporting and strengthening Ukraine’s healthcare infrastructure. Aggressive negotiations must be pursued with Russia to ensure stable and safe corridors for the delivery of healthcare supplies, necessary patient transfers, support for the health maintenance of the Ukrainian population, and assistance with the confounding health threats of the COVID-19 pandemic. By protecting and strengthening Ukraine’s healthcare system, well-funded international efforts can contribute to current wartime needs, provide a solid footing for post-conflict reconstruction, and enhance the future human security of Ukraine.

In the long term, failing to limit the damage to the healthcare sector leaves Ukraine ill-equipped to face the physical and mental traumas experienced by civilians and the military alike, and woefully unprepared for the potential waves of returning refugees. Further deterioration of the healthcare system will amplify the challenge of post-conflict reconstruction efforts and leave healthcare vulnerable to possible Russian disinformation attacks in the future. After the cessation of armed aggression, healthcare investments can begin to address pre-war dissatisfaction with healthcare and other state services, build resilience for the potential resumption of disinformation campaigns, and provide stronger capacity for eventual recovery efforts. International resolve to secure transport corridors, provide aid, expertise, and material assistance to the healthcare sector can fulfill strategic and humanitarian goals, serving the rare trifecta of political, tactical, and moral objectives.

Cynthia Buckley is an affiliate of the Center for European Union Studies and Professor of Sociology at the University of Illinois, Urbana-Champaign. A social demographer, she focuses on the impact of state policies on demographic decision-making and how shifting demographic trends challenge state and social stability in Eurasia.