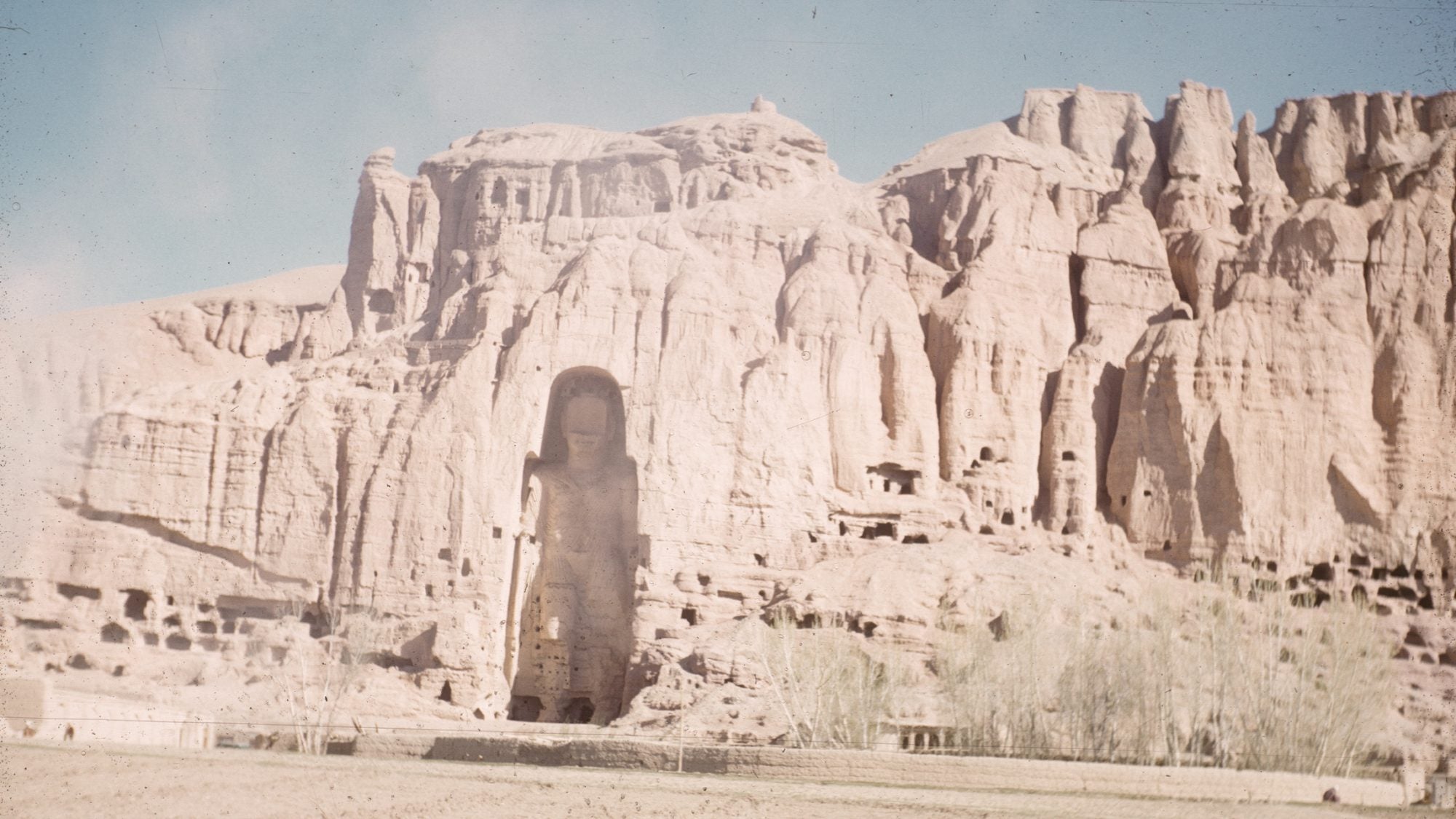 Cultural property has emerged as a target in the multi-domain battlespace and is being used by adversaries as a form of information operations, resulting in the exacerbation of conflict and destabilization. The U.S. Department of Defense needs to respond with informed and meaningful policies.

Effective defense of democratic norms and global U.S. interests requires the establishment of Department of Defense (DoD) policy, doctrine, strategy, and guidance designed to institutionalize cultural property protection (CPP) during all phases of military operations. The United States currently faces adversaries who are weaponizing history, monuments, symbols, and sacred sites in order to shape emerging battlefields by influencing public opinion and creating conditions for genocidal conflict. As a nation where most people trace their ancestry to distant places, it is sometimes difficult for U.S. citizens to understand cultural relationships where heritage is an ultimate value, one a person is willing to die for.

In 2003 and 2004, two key events caused the issue of cultural property and the military to resurface in Western public consciousness. The first was looting of the National Museum of Baghdad, and the second was damage to the iconic Mesopotamian city of Babylon by U.S.-led coalition forces who had been tasked to protect it. Both events compromised respect for the U.S. military, among consumers of global media coverage, and also among the citizens and military leaders of potential Middle Eastern coalition partners. During the 2009 Bright Star War Games, Egyptian generals denied the first request to take U.S. personnel to the Giza Pyramids for heritage awareness training. Their response could be summed up as: “U.S. soldiers, the destroyers of Babylon? They are the last people we want near our pyramids.” Ultimately, the training took place with U.S. personnel attending as guests of Zahi Hawass, then Secretary-General of the Supreme Council of Egyptian Antiquities.[1]

The trainers making the Bright Star request represented a partnership of U.S. and European academic archaeologists and military personnel who had created the Combatant Command Cultural Heritage Action Group, an ad hoc effort to develop CPP information, training, and intelligence assets. Their goal was to provide military personnel with the right information at the right time to enable the identification of and appropriate response to encounters with cultural property in host nations. In the early 2000s, it appeared that an effective cultural property protection program would consist of populating defense intelligence databases with inventories and descriptions of cultural properties of concern, especially those that were important to members of local communities, and then educating military personnel on how to apply this information. Momentum from these efforts resulted in NATO funding for CPP Advanced Research Workshops, which generated a formal report, a UNESCO Legal Manual for CPP, and a CPP Best Practices Handbook. As a result, NATO Stability Police actively incorporate CPP into their skill set, and CPP is now a component of NATO Protection of Civilians Policy. Based on current developments in the weaponization of heritage, the NATO is currently grappling with whether CPP warrants a policy of its own.

The twenty-first century has brought continuing demonstrations of the power of monuments and symbols as components of multi-domain warfare, including the Taliban’s destruction of the Bamyan Buddhas in 2001 and targeting of the World Trade Center as a symbol of Western capitalism. In 1947, occupying Russians placed a statue honoring World War II Russian soldiers in the center of the capital city of Estonia, Tallinn. Like many WWII monuments throughout the former Soviet states, the statue, named Monument to the Liberators of Tallinn, was viewed by Russian speakers as a symbol of heroism and by members of the ethnic population as a symbol of oppression. In 2007, when Estonians moved the statue, also known as The Bronze Soldier, to a nearby military cemetery, Russian media encouraged Russian speakers to take to the streets as associated cyber attacks targeted the Estonian government, banking systems, and media. The Bronze Soldier conflict illustrates how understanding the value of cultural property—tangible and intangible—is key to understanding the battlefield.

With the rise of ISIS, cultural property continues to be deliberately targeted for destruction as part of adversarial information operations campaigns. All too often, Western forces and analysts fell for ideological explanations when these destructions called for strategic analysis. Palmyra offers an excellent example. In 2015, ISIS forces held the ancient city hostage, destroying one monument at a time with the goal of pressuring coalition forces to act prematurely, prior to their partners being sufficiently trained and equipped to fight and win. European citizens were inadvertently supporting the ISIS cause when they pressured their governments to intervene immediately to save the ancient city.[2] Fortunately, the coalition held to its timetable. The Russians also demonstrated their deeper understanding of the value of weaponizing heritage when they took advantage of the global stage at Palmyra, literally and figuratively, by hosting a symphony concert in the ruins and taking credit for saving the site.

Currently, the United States and the West face adversaries whose weaponization of heritage is continuing to dramatically increase in scale and sophistication. Calculated narratives of revisionist history and associated monuments offer opportunities to influence the public opinion of entire populations. China has established a “cultural sector aid industry” associated with its Belt and Road Initiative, which “offers a powerful vehicle for a Sinocentric vision of the Silk Road and Eurasian History.” In Russia, the military and cultural sectors overlap in profound ways, such as shared titles for people like Sergei Naryshkin, who is both Chief of Foreign Intelligence and Chairman of the Russian Historical Society. The Russian Orthodox Church has openly supported Russian aggression abroad with rhetoric and by blessing bombs. Modifications to the site of ancient Chersonesus reflect an effort to justify the occupation of Crimea, along with the rededication of WWII Monuments across Russian-occupied territories. The Russians are even taking their WWII “show on the road” to Canada as they honor veterans of WWII convoys across the North Atlantic. The Antiquities Coalition has just released a sobering and detailed analysis of current Russian initiatives, a document that is essential reading for U.S. military policy makers, strategists, and planners.

Attempts to Address the CCP Challenge

Lost in the shadow of the military-industrial complex, cultural property initiatives in the United States and NATO have been laudable but insufficient to counter state-sponsored weaponization of heritage and culture. Since 2003, the United States and the United Kingdom both ratified the 1954 Hague Convention for the Protection of Cultural Property in the Event of Armed Conflict. Both nations also established Monuments Officer programs reminiscent of the ones recognized for their accomplishments in WWII. In the United States, the National Defense Authorization Act has recently required the U.S. Department of Defense to report its efforts to implement the requirements of the 1954 Hague Convention to the U.S. Congress, and even more recently required the DoD to identify an office at the secretariat level responsible for implementation efforts. Currently, this responsibility falls within the Office of the Under Secretary of Defense for Policy, which offers an ideal opportunity for establishing CPP policy and doctrine.

The DoD has made some notable accomplishments in the CPP arena, including the inclusion of cultural property inventory data into databases at the Defense Intelligence Agency. However, other accomplishments, as summarized in a series of reports to Congress, reflect individual rather than institutional initiatives for the implementation of cultural property protection capabilities for military personnel and their missions. To engage at the level of our adversaries in the cultural property component of multi-domain warfare, a paradigm shift is required. Analysts and mission planners need to recognize the intelligence value of cultural property information, and cultural property geospatial data layers still need to be added to military maps. Next, the DoD must recognize that the United States currently leads the world in protection of cultural property on military land at home and is the most effective federal agency when it comes to consultation with indigenous communities. These skills and the models of behavior they represent should be applied as realistic training opportunities. On Fort Drum, for example, protected archaeological sites populate the no-strike lists for division training scenarios, and senior leaders hone cross-cultural communication skills when hosting head of state delegates from the installation’s Haudenosaunee partner nations. Practicing respect for ancestral places and host nation representatives on U.S. military land has immediate applications abroad. Finally, we need to be thinking in far more nuanced and sophisticated ways about the relationship between monuments, sacred sites, and information operations when our adversary’s goal is conquest if not genocide.

The role of cultural property protection in military operations has completely changed since 2003. No longer is it enough to inventory cultural property and then to teach soldiers how to identify and respect it. People displaced from their own ancestral roots need to recognize the critical role heritage plays in the cultural identity of others. Once we appreciate the power inherent in understanding the value and significance of cultural property, we will have the motivation needed to institutionalize CPP considerations throughout all aspects of military operations. Cultural property is now a target in the information domain. The DoD needs to be able to recognize and respond to attacks on culture as part of a competitive narrative in the information space. We left the door unlocked, and our adversaries opened it. It is not just about paintings and statues anymore.

Dr. Laurie Rush is an Army Archaeologist and Native American Liaison with over twenty years of experience working on cultural property issues both at home and abroad. She is a Fellow of the National Science Foundation, the American Academy in Rome, a Smithsonian Research Associate, and a Penn Consulting Scholar. This article is written in her capacity as a scholar and does not reflect any policy or opinion of the U.S. DoD, Army, or Fort Drum.