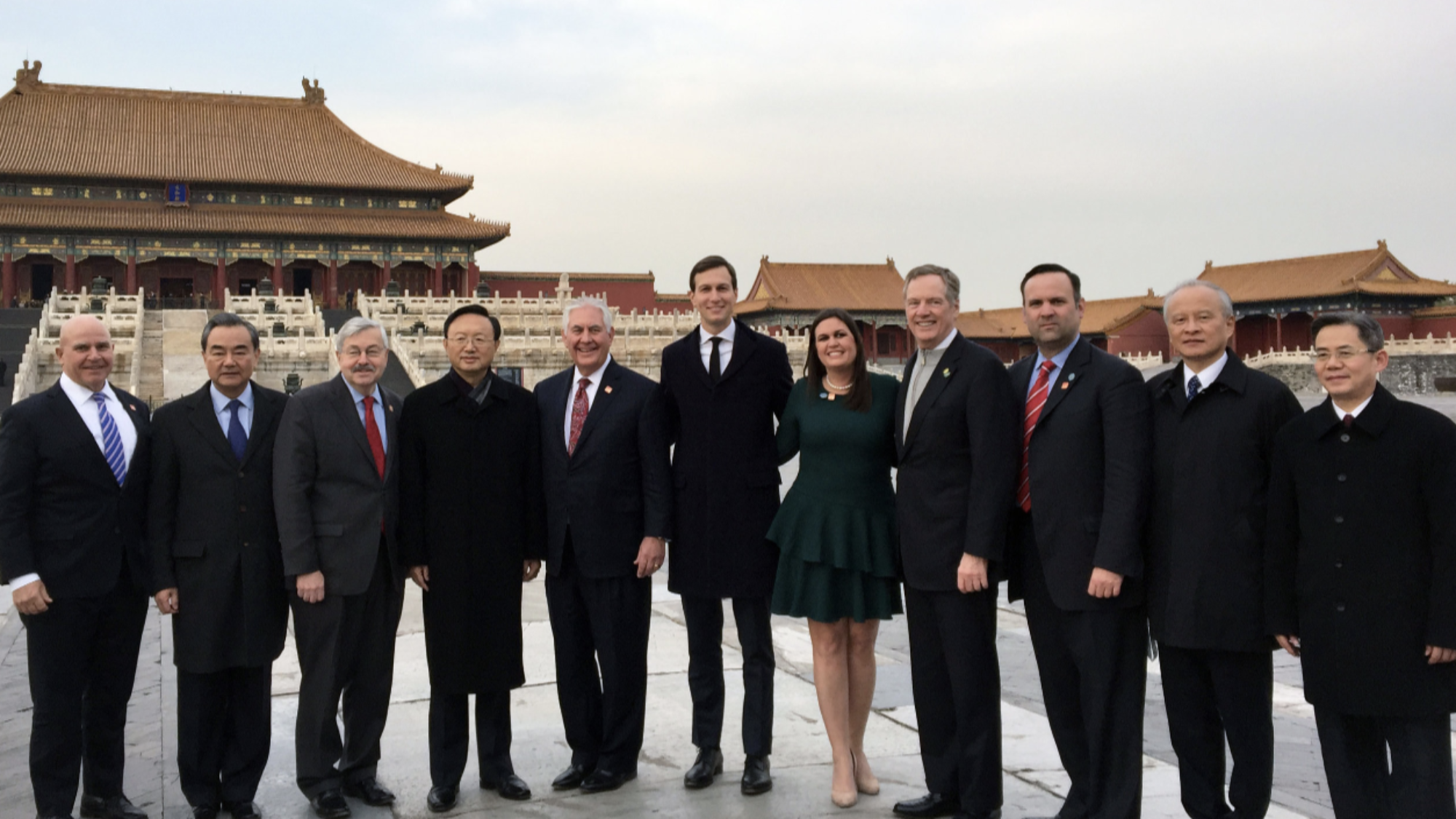 In recent weeks, intellectual property (IP) disputes have caused friction between Washington and Beijing. Will that friction spark a global trade war?

In mid-August, President Trump asked U.S. Trade Representative Robert Lighthizer to open an investigation into China’s intellectual property (IP) practices. “This is just the beginning,” Trump told reporters. Lighthizer, a veteran Reagan administration trade hawk, then launched an investigation under the notorious Section 301 of the Trade Act of 1974, used in the 1980s against the rise of Japan.

The investigation could lead to steep tariffs on Chinese goods—but it could also trigger a retaliatory global trade war.

Since the early 2010s—in parallel with the dramatic rise of Chinese innovation and outward direct investment—the Commission on the Theft of American Intellectual Property has argued that the plunder of American intellectual property is a systemic threat to the U.S. economy in which China plays a central role. As U.S. Commerce Secretary Wilbur Ross put it last August, “American genius is under attack from China.”

According to the Commission, counterfeit goods, pirated software and theft of trade secrets cost the United States $225 billion to $600 billion annually. While the Obama administration and Congress enhanced policy mechanisms to mitigate IP theft, the Commission believes it is time to implement more “aggressive” policies to protect American IP.

While the Commission feels that the Chinese government “forces” U.S. companies to relinquish IP to China, U.S. IP experts that work on IP transactions in China find little evidence of such practices. More often, Chinese public companies and state-owned enterprises have pushed hard to get the other party—usually a U.S., European or Japanese company—to part with its IP for a low price. Many foreign companies, particularly small and medium-sized enterprises (SMEs) and technology startups that do not appropriately understand IP risks, often have no choice but to sell (SMEs and start-ups are often poorly capitalized), or they believe that partnerships automatically protect their technology and thus have misguided views of their IP protection.

In highly regulated and strategic industries, Chinese oversight of both Chinese and foreign companies is more stringent. Conversely, Chinese companies have faced many barriers in the United States in similar strategic areas, from China National Offshore Oil Corporation’s failed effort in 2005 to buy U.S. oil company Unocal (eventually acquired by U.S.-based Chevron) to Huawei’s failed 2012 attempt to invest in America (which led to congressional hearings).

Interestingly, the Chinese government has often supported foreign companies in legal disputes. When foreign companies sue in Chinese courts, they typically win. From 2006 through 2014, foreign plaintiffs won more than 80% of their patent-infringement suits against Chinese companies, virtually the same rate as domestic plaintiffs.

In fact, it is a not-so-secret secret that for years foreign multinationals have been exchanging their technology expertise for market share in China (and several other large emerging economies). Semiconductors are a case in point. Reportedly, technology transfers increased significantly amid the global crisis around 2007-2009. Intel, which then made over 70% of its sales outside the United States, opened a $2.5 billion wafer fabrication foundry in Dalian, northeast China. In contrast to simple assembly plants, these “fabs” represent the tech giant’s IP crown jewels. Unsurprisingly, the move attracted many other foreign technology companies to establish a foothold in the mainland.

As the global crisis dragged major advanced economies into stagnation while China grew vigorously another half a decade, that bet proved very lucrative. At the time, Intel’s chairman was former CEO Craig Barrett. Today, Barrett is one of the commissioners of the U.S. IP Commission challenging China’s IP practices.

Advocacy in the name of independence

The Trump administration has relied heavily on the IP Commission to provide ammunition for its “America First” views. Though American media have often portrayed the Commission as an independent actor in the IP debate, that portrayal is not valid.

The IP Commission is co-chaired by Dennis Blair, former U.S. Director of National Intelligence and commander of U.S. forces in the Pacific, and Jon Huntsman, Trump’s current ambassador to Russia and former ambassador to China who left his post after an incidental appearance at a pro-democracy protest in Beijing.

In addition to Intel’s Barrett, the Commission includes veteran senator Slade Gorton, who focuses on economic and trade threats against America through the “9/11 Commission,” the bipartisan Partnership for Secure America, and the Slade Gorton International Policy Center, funded by the National Bureau of Asian Research. The final group was founded in the ‘70s when anti-communist Democratic Senator Henry M. Jackson, a neoconservative hero, raised the need for what was initially called a “National Sino-Soviet Center.”

The IP commissioners also include former U.S. Deputy Secretary of Defense William J. Lynn III, a longtime lobbyist of Raytheon, a major $25 billion U.S. defense contractor focused on crushing China’s air defenses, among other things. Deborah Wince-Smith, President and CEO of the U.S. Council on Competitiveness – she swears by “Made in America” – has criticized the China-Canada free trade agreement and expects the United States to replace China as the leading global manufacturer by 2020. Finally, Michael K. Young, the President of Texas A&M University, is a Mormon official who served in President Bush’s U.S. Commission on International Religious Freedom and remains an ardent advocate of religious freedom and global democracy.

These commissioners are not unqualified. On the contrary, all are highly-regarded in their respective areas of expertise. But the Commission is not an independent or a neutral broker. Rather, it is a highly partisan advocacy group for “America First” interests operating outside of and yet closely with the government.

Imagine the reverse: President Xi Jinping launches a Chinese IP Commission that Chinese media portrays as independent, but it is headed by a former admiral and intelligence director, an ex-Chinese U.S. ambassador, anti-U.S. leaders of China’s People’s Congress, contractors of the People’s Liberation Army, chiefs of Chinese competitiveness councils, and the Communist Party’s leading theorists. Perhaps U.S. observers might then make a point of possible moral hazards that may undermine the Chinese Commission’s independence and neutrality. Precisely the same applies to the U.S. IP Commission.

A truly unbiased investigation into Chinese trade practices in the United States and elsewhere would be highly welcome (as would be similar inquiries into U.S. trade practices). But to foster credibility, such studies must be truly independent and neutral.

Historical Timing of the IP Debacle

Unsurprisingly, the timing of the public hearing about Chinese IP and the IP debacle is escalating at a moment when Chinese companies are beginning to compete among world-class leaders, cutting-edge innovators, and lucrative brands. The shift, which some predicted over a decade ago, is reflected by an increasingly global struggle for innovation. Two decades ago, China was still far behind the United States, Japan, South Korea, and Germany—the world’s leading innovators—in total patent applications. Now it is ahead of all of them.

But in these rivalries, not all patents are equal. Triadic patents, which are registered in the United States, EU, and Japan to protect the same invention, tend to be the most valuable. In triadic patents, too, China’s patent power has increased dramatically and is about to surpass that of Korea and Germany. Japanese and U.S. patents peaked around 2005–2006. Despite some progress, U.S. patents are still 15% below their peak, whereas those of China increased more than sixfold in the past decade.

Since patent competition is cumulative, catch-up requires time. Yet the trend line is clear: If U.S. and Chinese triadic patents continue to grow in the future as they have in the past five years—a likely assumption in light of Beijing’s recent rebalancing of its economy from investment and exports to innovation and consumption—China is likely to surpass the United States by the late 2020s. Perhaps that’s why Trump is targeting China’s IP today.

Some U.S. observers suspect that the Trump administration’s IP investigation is less a scrutiny of forced technology transfers than a negotiation ploy to start bargaining from a more favorable position. But it is also a Pandora’s Box that can undermine progress in U.S.-Chinese trade relations and hinder global growth prospects.

In fact, much of China’s recent IP progress can be explained by past technology transfers and the government’s investment in science and technology. Moreover, Chinese companies moving up the value-added chain have begun to emphasize the need for IP protection.

If Trump truly wants the United States to retain its status as the home of invention, he should embrace the spirit of innovation and develop America’s advantages, not attack China for its new capabilities.

Dr. Dan Steinbock is the founder of Difference Group and has served as research director at the India, China and America Institute (USA) and visiting fellow at the Shanghai Institutes for International Studies (China) and the EU Center (Singapore). For more, see https://www.differencegroup.net/