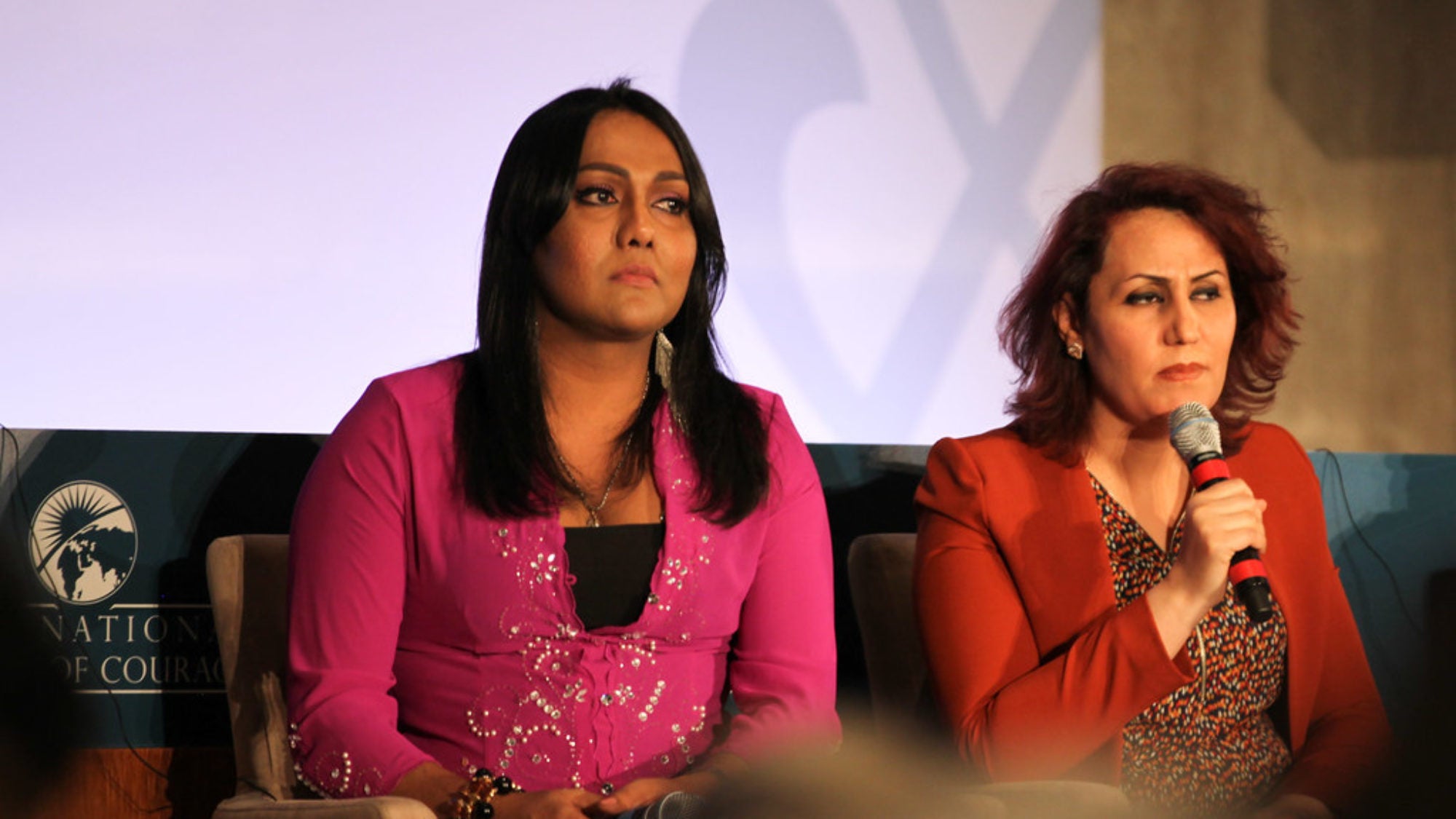 Title: “The Deceased Can’t Speak for Herself:” Violence Against LGBT People in Malaysia

The New Year rang in little cheer for transgender women in Malaysia. On January 1, a trans woman was killed in Klang, a Kuala Lumpur suburb, the third such killing in Malaysia in fewer than two months. Her death remains under police investigation. Like so many trans women in Malaysia excluded from the formal employment sector, this woman was a sex worker. She died falling—or was possibly thrown—from a moving vehicle. The driver, presumably her client, was arrested in connection with the death. He told police she jumped from the car after stealing his mobile phone. Trans sex workers in Klang, however, are convinced she was murdered.

Just three weeks earlier, also in Klang, another trans sex worker was beaten to death. While police have opened investigations into both cases, they hastily determined that the killings were not hate crimes. Rights advocates are skeptical, but as one trans activist put it, “the deceased can’t speak for herself.”

Lesbian, gay, bisexual and transgender (LGBT) people in Malaysia face violence from both state authorities and civilian actors. In September 2018, a Sharia court sentenced two women to caning for purportedly attempting to engage in homosexual relations. State religious officials and police officers have also physically and sexually assaulted transgender women arrested during raids to enforce Sharia laws that prohibit “a male posing as a female.”

Several Malaysian trans women have reported abusive arrests have diminished since an appeals court struck down as unconstitutional a state “cross-dressing” law in 2014. Malaysia’s highest court overturned the ruling on a technicality, but trans women say advocacy and awareness-raising have restrained officials. Now, trans women primarily fear violence from ordinary people: clients, partners, or strangers, including vigilante groups seeking to rid the streets of trans women. But even when state agents are not the culprits of violence, they bear responsibility for propagating discriminatory beliefs that may lead to hate crimes and for failing to denounce violence when it takes place.

Malaysia held a historic election in May 2018, in which the United Malay National Organization (UMNO) party, in power since independence in 1957, was massively defeated. Fed up with abuses of power, voters cast their ballots for change. The new coalition government, led by the Pakatan Harapan party, has delivered to a certain extent, dropping politically motivated charges against many activists and investigating corrupt officials. Yet, it has pointedly refused to embrace LGBT equality. Prime Minister Mahathir Mohamad has described “LGBT” as among “things we cannot accept,” while Pakatan Harapan leader Anwar Ibrahim has called for mobilization against “LGBT tendencies and their ideas.” Furthermore, the deputy home minister has condemned LGBT “culture,” and religious affairs minister Mujahid Yusof Rawa has promoted the scientifically discredited idea that LGBT people should and could “change” their sexual orientation or gender identity and return to the “right path.”

Malaysia’s federal penal code, which dates back to British colonialism, punishes “carnal knowledge against the order of nature” with up to twenty years in prison. The country’s thirteen states and federal territories each have their own Sharia criminal enactment, applicable to Muslims. Almost all such state laws prohibit same-sex relations. They also prohibit “posing” as someone of a different sex, making Malaysia one of the few countries in the world that locks people up simply for being transgender.

When religious authorities in Terengganu state, which is run by the opposition Malaysia Islamic Party (PAS), caned two women for lesbian acts, some ruling party officials voiced objections regarding the nature of the punishment, and PH leader Anwar Ibrahim suggested that same-sex relations should be decriminalized. Anwar should know: as the most famous casualty of Malaysia’s “unnatural offenses” law, he was twice imprisoned between 1999 and 2018 on politically-motivated sodomy charges. However, his party has taken no steps toward decriminalizing sodomy, nor toward persuading states to repeal anti-LGBT provisions in their Sharia enactments.

Instead, the current administration continues its predecessor’s anti-LGBT policies, focusing on “rehabilitation” and prohibition of so-called “promotion of LGBT culture” (any form of LGBT visibility), while maintaining the threat of sanction through state and federal laws. The ethnically and religiously diverse Pakatan Harapan coalition appears determined to legitimize its Islamic credentials to bolster support among Malay Muslims, many of whom voted in favor of the long-ruling UMNO party or Islamist opposition parties in 2018. This battle for the Malay heartland, presumed to be socially and religiously conservative, causes politicians from across the political spectrum to emphatically adopt anti-LGBT positions. Activists argue that Pakatan Harapan’s unwillingness to ally itself with LGBT people’s struggle for equal rights and its silence in the face of hate crimes renders it complicit in those crimes, and that jockeying by politicians to avoid being seen as pro-LGBT fuels hate. One clear battleground is online. Multiple LGBT people and rights activists have reported a spike in anti-LGBT hate speech on the Internet since the elections. In August, one trans-led group filed a police complaint about social media posts promoting anti-LGBT violence. Six months later, they had still not received a response.

In this context, when eight men in Seremban assaulted a trans woman known as Suki in August 2018, beating her so severely that doctors had to remove her spleen, police who interviewed her in the hospital asked her why she thought she had been attacked. She responded with outrage: “They’re in the police station. Shouldn’t you be asking them instead of me?” In December, attackers pulled two men from a car in Kuala Lumpur and beat them for allegedly engaging in same-sex intimacy, then circulated a video of the assault on social media.

Police have made arrests in some of the recent hate-crimes cases. Two killings from 2017—one of a trans woman named Sameera Krishnan, stabbed and shot to death in Kuantan, and another of 18-year-old student T. Nhaveen in Penang, beaten to death by high school classmates who had bullied him for being “effeminate”—have resulted in ongoing prosecutions. Yet, when police refuse to acknowledge that acts of violence might be bias-motivated crimes, as they have with the killings of trans women in Klang, and when the authorities fail to condemn attacks, LGBT people are left feeling that the state does not support them. Even if perpetrators are brought to justice, a strictly punitive approach without a prevention strategy or meaningful change in political leaders’ approach to LGBT rights are all unlikely to stem the violence. A punitive approach also raises its own human rights concerns; a murder conviction, for instance, carries the death penalty in Malaysia. Many of the alleged assailants in these cases are young people who have been molded by societal and state-sponsored homophobia and transphobia. As long as authorities shut down positive portrayals of LGBT people while promoting a harmful “change” narrative, school textbooks portray LGBT people as deviant, and Malaysian law considers them criminals, impressionable young Malaysians may choose to take the law into their own hands.

Pakatan Harapan’s campaign manifesto promised to “make [Malaysia’s] human rights record respected by the world.” Malaysia must prioritize the right to life and the right to be free from violence—rights which currently elude many LGBT people. If Malaysia’s government wishes to address anti-LGBT violence, it must condemn the attacks and recognize that many of them are hate crimes. It should roll out a multi-pronged prevention plan, to include promoting public discussion of LGBT rights, removing harmful stereotypes from textbooks, discontinuing anti-LGBT state programs, and initiating legal reforms to advance LGBT equality. The police should undergo training in recognizing and investigating anti-LGBT hate crimes. Denial may be politically expedient, but lives are at stake. The deceased demand to be heard.

Neela Ghoshal is a senior LGBT rights researcher at Human Rights Watch. Thilaga Sulathireh is with Justice for Sisters, an advocacy group working on human rights of trans and LGBTIQ+ persons in Malaysia.