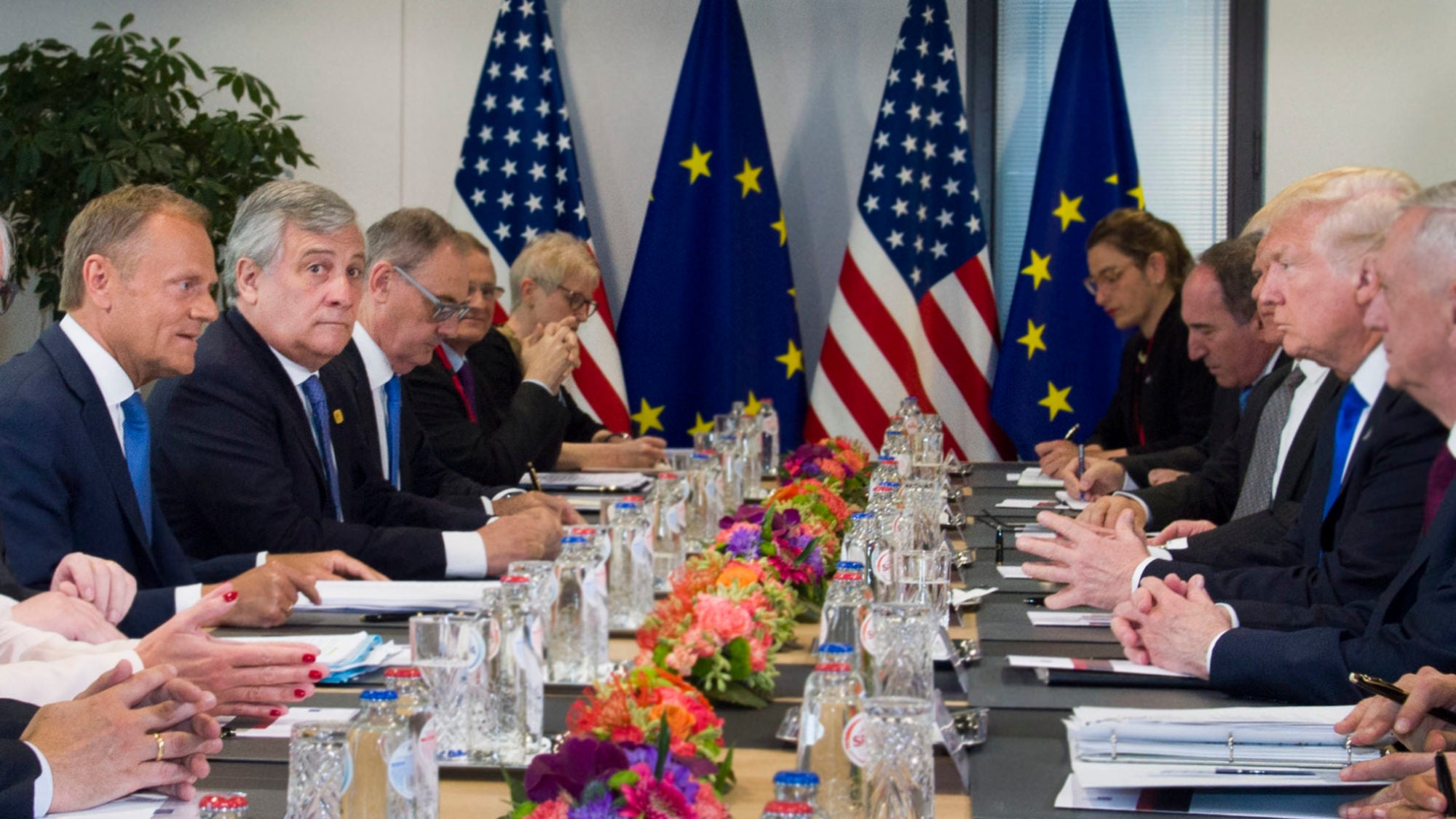 Title: The United States and its New Allies in Europe

Donald Trump’s presidency has been characterized by confrontation with allies and emerging rifts within the Euro-Atlantic area. Given the current state of the relationship between the United States and the European Union (EU), this characterization is somewhat deserved. Nonetheless, the Trump administration’s oversimplification in the media landscape has also allowed the White House’s pivotal strategy shift towards Europe to go largely unnoticed. While it is true that, since 2016, U.S. relations with traditional European partners have witnessed considerable deterioration, it is also true that, under the current administration, new partnerships have quietly emerged.

Over the past several years, the United States has observed its influence in Europe progressively diminish, with Brussels increasingly pursuing policies that are regarded as competitive against, rather than complementary to, long-term U.S. interests. Moreover, the contemporary push to achieve EU strategic autonomy, propelled especially by Washington’s traditional allies in Western Europe, has in practice translated into revitalized efforts for a gradually independent foreign policy. This is further linked with efforts to expand the local industrial-military complex and buttress intra-EU military collaboration, if not to achieve complete military integration over the long-run. In addition, the impending Brexit will ineluctably result in further weakening of Washington’s leverage, since the United Kingdom has long strived to steer the European Union into directions congruent with U.S. geopolitical aims.

Even as Western European countries become ever more wary and critical of U.S. policies around the globe, the “new” EU Eastern member states—those that were Washington’s ideological foes during the Cold War—increasingly represent the White House’s best hope for preserving strong U.S. political presence within the EU. Despite their democratic deficiencies (and, at times, even democratic backsliding), the EU’s Eastern member states share many of the same strategic viewpoints and interests as the United States. More importantly, given their proximity to the increasingly active Russian Federation, the majority continue to perceive the United States as an overarching guarantor of their security and sovereignty. As a result, these member states are often far more driven by pro-U.S., rather than pro-EU, tendencies.

This has manifested itself most notably in the areas of European military collaboration and energy security. Successive U.S. administrations have incessantly demanded European NATO allies share more of the burden and increase their defense spending, and rightly so. Despite this, Washington is typically less enthusiastic about advances in the EU’s internal military cooperation. In spite of the potential savings it could yield, the United States views EU military integration as a possible strategic obstacle rather than a strategic benefit. London has long served as the key U.S. proxy in this respect, effectively hindering any such attempt. As a result, the United Kingdom received the unenviable label of “American Trojan horse” inside the EU. It therefore comes as no surprise that the European Defense Fund (EDF) or Permanent Structured Cooperation (PESCO) emerged almost immediately after the notorious Brexit referendum took place.

Nevertheless, with or without London, the EU’s new defense initiatives are already facing mounting pressure and pushback stemming predominantly from several of the new EU member states, especially Poland. While not in complete opposition to such proposals, some states perceive defense integration efforts as an endeavor which could come at the expense of weakening transatlantic bonds—a risk many Eastern states are not willing to take. From a U.S. foreign policy perspective, as one door closes, another opens. By capitalizing on new EU members’ pro-U.S. tendencies, Washington could easily reassert and maintain its political presence in Europe, even after Brexit.

Such a coalition looks increasingly auspicious, as the United States and EU Eastern members share an ever greater number of political interests and strategic viewpoints as well. Apart from EU military cooperation, a majority of new member countries also align with the United States against their West European counterparts in the field of energy security. This has been recently demonstrated by the Nord Stream 2 project to build an underwater pipeline that will transport natural gas directly from Russia to Germany. While Berlin adamantly pushes forward with the project’s completion, the United States has vociferously criticized it. Officially, as Mike Pence recently reiterated, such criticism stems from Germany’s failure to address the threat Russia poses. Unofficially, and probably more accurately, it originates from U.S. efforts to convince European partners to instead purchase American liquefied natural gas (LNG). Either way, several EU Eastern members share U.S. security concerns and have long strived to sway Brussels to kill the Nord Stream 2 project. In their view, the EU dependency on Russian gas has long undermined European security; therefore, they fear that Nord Stream 2 would only exacerbate the situation.

Efforts to oppose the pipeline have already begun to take shape. In an effort to diversify EU energy sources, numerous countries in Central and Eastern Europe have adopted measures to reorient its energy market toward more LNG imports, a move which, by default, is congruent with U.S. interests. As of now, “old” EU members are still dominant importers of American LNG, with Spain and France leading the way. Nevertheless, for countries such as Poland and Lithuania, this re-orientation goes even further, as focusing on LNG now officially forms a component of their national security strategies and virtually guarantees regional alignment with U.S. interests.

Recently, both Lithuania and Poland inaugurated their first LNG terminals, while at the same time developing interconnected regional pipelines to Estonia and Latvia. Last year Poland signed a new twenty-four-year long contract regarding LNG imports from the United States; Warsaw is simultaneously laying plans for expanding the capacity of its LNG terminal by 50% over the next two years. Thus the “new” EU members, unlike their Western European counterparts, not only echo the very same politico-military concerns as the United States regarding the Russian Federation and energy security, but also offer an additional opportunity to satisfy the American pursuit of new markets for U.S. LNG exports.

Common interests and mutual understandings, however, permeate far beyond solely European internal affairs. Not only does the United States find staunch supporters in Central and Eastern Europe who reflect U.S. political ambitions within the EU, but the current White House administration can also to a large extent regard local governments as ideological kin. This is further corroborated by the fact that from March to May 2019, all prime ministers from Central Europe (the Czech Republic, Slovakia, Hungary, and Poland) were invited into the oval office.

The conservative populism that dominates some new EU members—especially Hungary and Poland, and to a lesser extent the Czech Republic and Slovakia—appears to be a mirror reflection of the Trump administration’s constituency in the United States. Hardline views on immigration and border control, accusations directed at mainstream media for their alleged lack of objectivity, and efforts to push back against globalization are but a few common denominators. Numerous local Eastern European political elites also embraced and supported Donald Trump during his 2016 presidential campaign, including Hungarian Prime Minister Viktor Orban and Czech President Milos Zeman.

Such ideological closeness does not only result in a tendency for these governments to gravitate toward each other, but it also serves as a platform for providing further legitimization of such policies on the international scale, lending them greater relevance.

Therefore, for Donald Trump, a closer association with “new” EU members may prove a winning strategy. Weakening the Brussels unity by engendering more division and empowering conservative worldviews across the Euro-Atlantic area could provide an opening for the United States to re-entrench its political presence inside the post-Brexit EU. No matter how malign the impact of such a strategy may be for the EU or the liberal world order, it will likely have a considerable reinvigoration effect on the success of U.S. foreign policy in Europe.

Michal Bokša is a Research Fellow on Central and Eastern Europe with The German Marshall Fund of the United States (GMF) and the Research Fellow of the Association for International Affairs specializing in international security. Previously, Michal worked within NATO structures, initially at the NATO Defense College in Rome and subsequently, as a Civil-Military Analyst focused on Eastern Europe, at the NATO Supreme Headquarters Allied Powers Europe in Belgium. Michal graduated from the University of Cambridge with a degree in International Relations and Politics (MPhil).