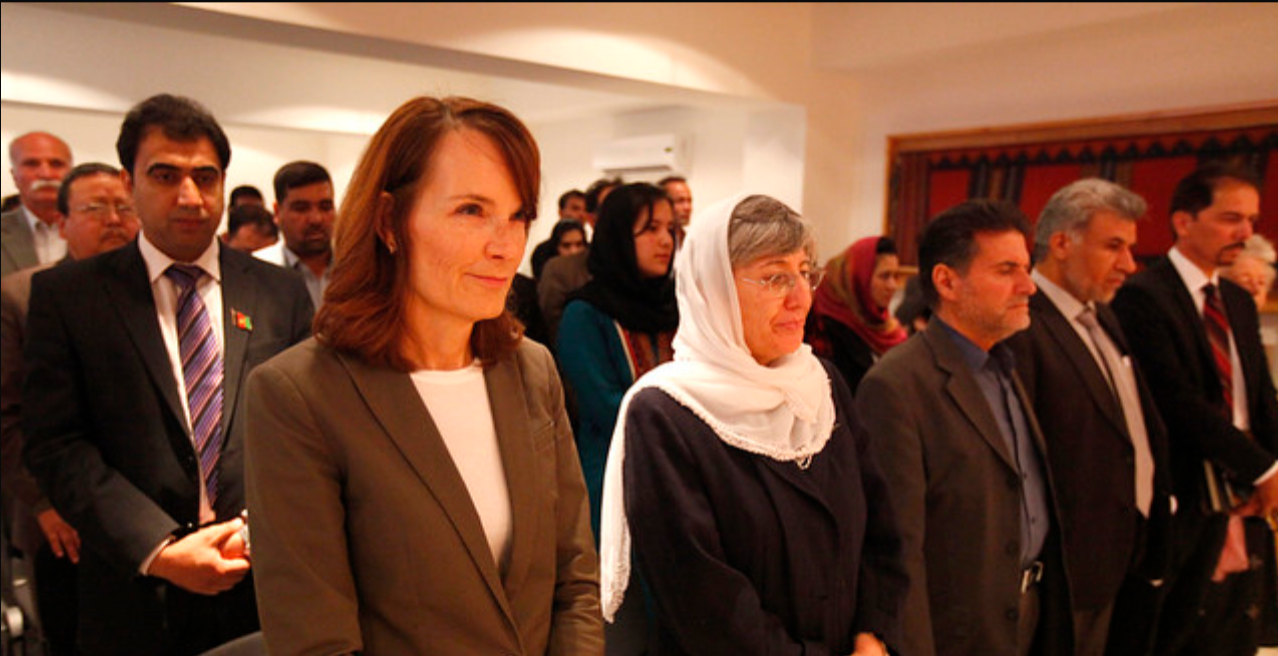 Title: No Peace Without Justice in Afghanistan

Afghanistan’s presidential election took place on September 28, 2019, with less than 2 million people participating out of 9.7 million registered voters. Taking into consideration Afghanistan’s total population of 35 million, the turnout was a historic low—a problem further amplified by the fact that the government poured a huge amount of financial and human resources into election preparation. The main explanation for such low turnout is twofold. On the one hand, security threats such as suicide attacks or gun violence—which reached their peak during the presidential election campaigns—deterred many people from going to polling stations. On the other hand, Afghans have become wary about determining their own political fate because, for decades, regional and international powers have steered the political wheel in Afghanistan, rather the people. After four months, election results have still not been announced, leading to further speculation and anxiety among a population which has already been the victim of four decades of violent conflict in the country. This anxiety is further exacerbated by the ongoing “peace” negotiations with the Taliban. Afghan people have learned from experience that, even in the best-case scenario of the election results or peace negotiations, they cannot hope for new justice measures to heal their wounds. As demonstrated by the experience of Afghanistan and other countries, peace and security will not last without addressing the people’s demands for justice.

Since the coup d’état of 1978 and the Soviet invasion a year later, Afghanistan has experienced consecutive regimes, from one end of the extremist ideological spectrum (the Soviet-backed People’s Democratic Party of Afghanistan) to the other (the Mujahideen and the Taliban). Each of these regimes was accused of gross human rights violations. A NATO-led intervention toppled the Taliban in 2001, paving the way for elections and, it was hoped, other democratic institutions and human rights improvements. At every phase of the political transition, the Afghan people cautiously hoped for an end to conflict and some measures of justice, only to realize that each regime surpassed the atrocities and crimes of the one before. In four decades of violent conflict, millions of civilians have been summarily executed, disappeared, imprisoned, tortured, and maimed. Until the Syrian refugee crisis, Afghans constituted the largest refugee population globally.  To this day, over six million Afghans are displaced, constituting the second-largest refugee population in the world.  Over 1.7 million Afghans are Internally Displaced Persons (IDPs) due to ongoing violent conflict (84 %) and natural disasters (14%). In addition to civil and political rights violations, violent conflicts have severely violated people’s socio-economic rights, such as the right to an adequate standard of living, the right to work, and the right to education. As a result, around 52 percent of the Afghan population live in multidimensional poverty. Afghanistan remains a country in conflict, with a high toll on civilian lives caused not only by the insurgent attacks of the Taliban or ISIS, but also by government forces and the CIA-supported paramilitaries.

In other countries that had similar experiences, such as Argentina and South Africa, some measures of transitional justice (TJ) have been undertaken during periods of political transition in an attempt to deal with their violent pasts. TJ is an umbrella term for approaches to address past human rights violations in the aftermath of a conflict or after a period of dictatorship, in an attempt to demand accountability, provide justice to victims, and restore the rule of law. It includes both judicial and non-judicial measures such as truth commissions, reparations, and administrative measures. While many scholars of TJ consider this trend to have become a norm in countries moving towards democracy after violent conflict and dictatorships, Afghanistan has been an anomaly. Not only have successive regimes and the heavily involved international community sidelined justice measures in favor of “peace” and “security,” but they have also paved the way and legitimized the return of warlords and other individuals implicated in war crimes and crimes against humanity under previous regimes. As a result, a culture of impunity continues to thrive, leading to crimes committed by the powerful—most of whom have been implicated in human rights violations in the past—such as massive and systematic land grabbing and engagement in illegal revenues such as poppy cultivation and illegal mining. These activities have further fueled conflict and led to pervasive corruption at all levels across the country’s institutions. Moreover, during periods of negotiations with the Taliban, there has been no indication of demanding accountability for past crimes or addressing victims’ needs.

Following the overthrow of the Taliban regime in 2001, UN-sponsored talks were held in Bonn, Germany involving prominent Afghan individuals and political parties as well as regional and international powers. The 2001 Bonn Agreement established an interim administration, which was then to lead to elections and the formation of a new government. Some thought it would be a defining moment in a period of transition from Taliban rule to a government that would end violence and bring peace. However, in an attempt to secure an agreement between different factions, some of whom were accused of gross human rights violations, the UN-led team avoided the inclusion of any references that would lead to investigating past human rights violations and war crimes.

The Afghanistan Independent Human Rights Commission (AIHRC) established in 2003 conducted an eight month-long survey (2005) among 6,000 participants, including Afghan refugees in Pakistan and Iran, in an attempt to propose a national strategy for addressing past abuses. The result of this project was the publication of a seventy-five-page document aptly titled “A Call for Justice,” created by and for the people of Afghanistan, that states: “To date, [the] past has not been confronted. This report seeks to explore whether the people of Afghanistan want this to be addressed, and if so, how.” One of the most groundbreaking findings of this project was that around 70 percent of the population identified themselves or a close relative as direct victims of human rights violations.

Following the public consultation, the President’s office, the AIHRC, and the United Nations Assistance Mission to Afghanistan (UNAMA) drafted a national Action Plan for Peace, Reconciliation and Justice (Action Plan) in 2005. The Action Plan identified five key components of justice and reconciliation for Afghanistan, including truth seeking, symbolic measures, accountability mechanisms involving vetting procedures, institutional reforms, and reconciliation. Although in theory the Action Plan contained significant measures, in practice, very little was achieved before the Action Plan’s three-year timeline mandate expired in March 2009. This was primarily due to fierce opposition from within the Afghan Parliament and important sectors of the Administration. In March 2007, the Parliament passed the Amnesty Law that ensured a blanket amnesty for all perpetrators of human rights abuses in past regimes, thus turning impunity into law. More significantly, on 12 April 2019, the Pre-Trial Chamber III of the International Criminal Court (ICC) rejected the request of the ICC’s Office of the Prosecutor to open an official investigation on war crimes and crimes against humanity in Afghanistan, stating it was not “in the interest of justice”.

What is Possible to Address Justice Demands of Victims?

Despite the internal and external political limitations to administering transitional justice in Afghanistan, as well as the increasingly large percentage of victims in Afghanistan, it is possible to undertake concrete steps to provide justice to war victims. I argue that a bottom-up approach to justice is the only solution that should be put forward. A bottom-up approach would stress the role of locals, with an emphasis on their voices, perceptions, and struggles. As demonstrated in other contexts , such as the Mothers of the Plaza de Mayo in Argentina, it is possible to demand justice for war victims through civil society organizations.

First, the AIHRC should organize another nation-wide consultation to gauge bottom-up opinion on the question of justice and addressing victims’ needs, much like it did in 2005. Unlike the 2005 effort, which only addressed civil and political harm, this initiative could also address socio-economic harm. Second, donor communities should continue to lend their support to civil society organizations engaged with war victims, such as the Afghanistan Human Rights and Democracy Organizations (AHRDO). Through its dedicated and seminal work on documenting, archiving, and opening space for dialogue among war victims, civil society organizations, academics, and the international community, AHRDO, like its sister organizations elsewhere around the world, has demonstrated the indispensability of such actions under given circumstances. Third, national and international pressure should continue on the International Criminal Court to open investigations in Afghanistan, even if only it engages a handful of cases. Finally, donor communities should pay attention to war victims’ needs and make at least a portion of their funding contingent upon justice provision to war victims, just as it has been doing in the last fifteen years in relation to women’s empowerment.

History and the experiences of other countries have illustrated that unless the civil, political, and socio-economic justice demands of war victims are addressed during political transitions, durable peace and security will be nothing more than a wishful thought. Afghanistan is no exception.

Huma Saeed is a research consultant and an affiliated researcher at the University of Leuven, where she obtained her PhD in criminology focusing on transitional justice and economic-state crime in Afghanistan. For a detailed list of her publications, please visit: https://humasaeed.eu