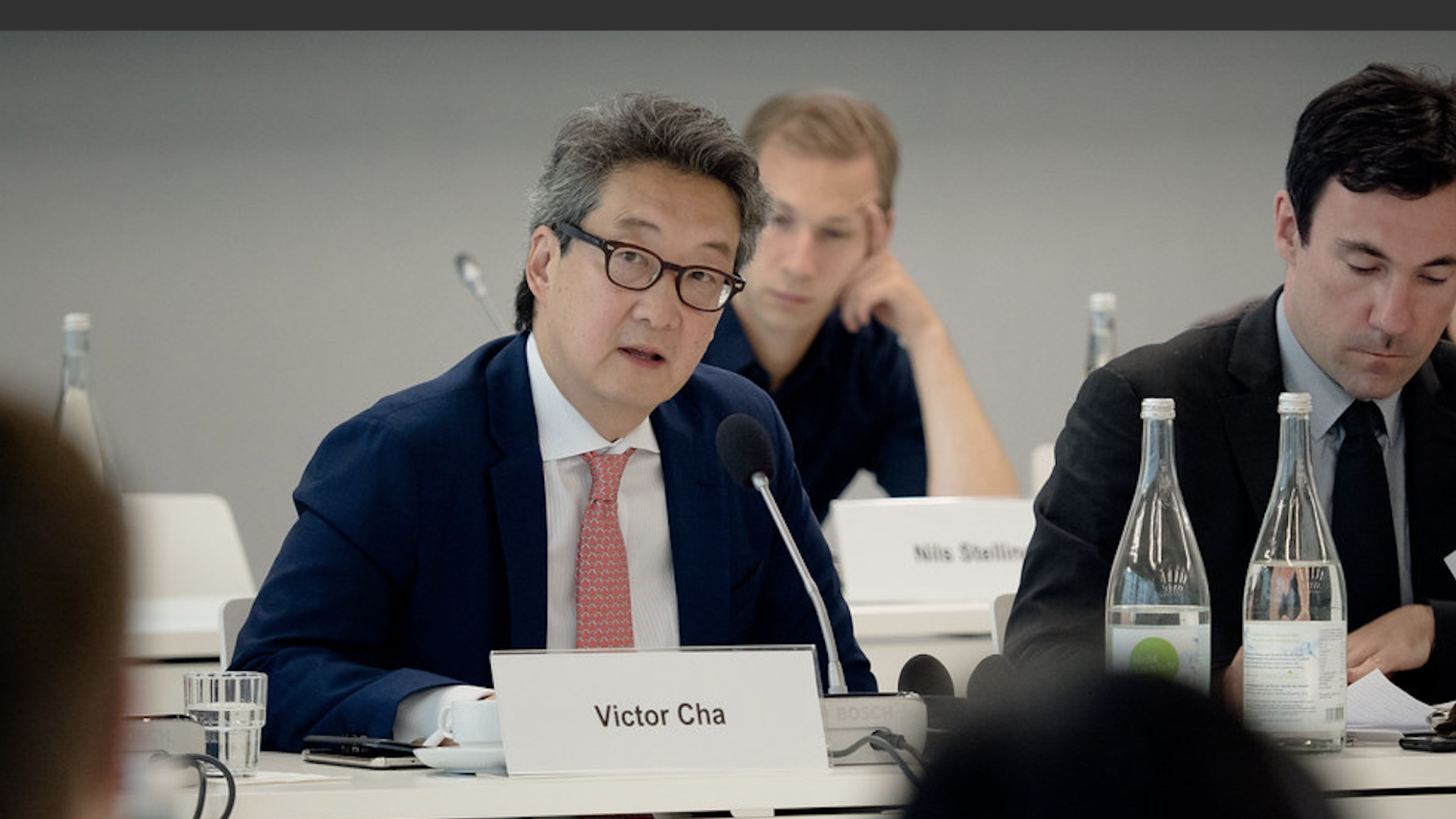 Title: Dr. Victor Cha on China and the NBA

On Thursday, November 14, Professor Victor Cha, author of The Politics of Sport in Asia, gave a lecture which looked at the recent controversy over a tweet in support of Hong Kong protesters that led to Chinese sanctions against the NBA. How should we think about the relationship between the NBA and China? Should players speak out about perceived injustice or should politics and sport remain separated? Dr. Cha answered these and other questions that frame this specific dispute in the larger context of China’s rise and the future of the liberal international order.

GJIA: In the lecture, you mentioned China is practicing “Predatory Liberalism.” Could you explain what that is?

VC: “Predatory liberalism” is essentially the idea that China welcomes participation in the global free trade order until it doesn’t. China does engage in the liberal international trading order and creates trading relationships with all of these countries in the international system. But then, when it needs to, it’s willing to leverage the vulnerabilities of market interdependence in a way to pursue political goals. So what that basically translates into is a predatory economic strategy which says, “I’m going to cut you off from the Chinese market until you do what I say.” In that sense, China engages in the global trading order, but then it also has this predatory side and will leverage that order when it feels it’s necessary. This is clearly in violation of WTO norms and rules on nondiscrimination.

It’s hard to say what the origin is. I think once China grew economically, it saw the strength of its market, and recognized that it was a weapon they could use to achieve political goals. It seems that they only use that leverage on very specific issues, which is anything having to do with political dissidents, such as Tiananmen, Hong Kong, Taiwan, Xinjiang, and Tibet.

You mentioned that China engages in the global free trade order in a different way, and  it seems like these kinds of sanctions against the NBA are different from those placed on other industries, like salmon and food, because you cannot easily find an alternative for the NBA. What do you see as the differences and similarities between sanctions on these different industries?

The big difference is that when China practices predatory liberalism, they assume that the cost to their people is not as high as the cost to the target. For example, when they sanctioned the export of Norwegian salmon in China because the Nobel Peace Prize committee chose to give the Peace Prize to political dissidents in China, I think that had no impact for the average Chinese person, because they only sanctioned Norwegian salmon. If Chinese who like salmon can’t eat Norwegian salmon, they’re just going to eat Scottish salmon instead. Actually, during this period of sanctioning, sales of Scottish salmon went up in China, whereas in Norway, salmon exports to China went down 60 percent in one quarter. So it was a real blow to Norway. Realistically speaking, how many Chinese really care about salmon? Not that many. But the NBA is a completely different story. There are more NBA fans in China than there are in the entire population of the United States, so the scale here is at a completely different level.

China practices this strategy fairly often, and they’ve never had to account for the impact of these strategies on the Chinese people. But, again, given the scale of NBA fanship in China, if they’re going to blackout games, Chinese people are going to get angry. Chinese people can eat Scottish salmon, but they’re not going to choose the European League over the NBA. There is no James Harden, or any of those kinds of players. They don’t have that in the European League. So there’s no substitute for the NBA. And I just wonder whether the Chinese government thought about that when they took this hardline action against the Rockets.

Do you think that’s why the government didn’t seriously block the NBA? After all, after a couple of weeks, they started rebroadcasting every day.

Yes, they started rebroadcasting NBA games, but they still have blocked out the Houston Rockets, which is by far the most popular team in China because of Yao Ming and Jeremy Lin. We’ll see what happens going forward. But again, this was just one tweet by one guy who’s not even a major figure in the NBA, and he took it down after a couple of hours. Still, the Chinese government wants to impose what amounts to hundreds of millions of dollars in punishment on the economy and censor the most popular NBA team in China that is adored by hundreds of millions of fans. That doesn’t seem smart to me.

Would you say China’s sanctioning of fashion industry or airline companies, for example, would be more similar to the case of salmon, because there are multiple brands and airlines?

Yeah, I think so, although again, I think the scale is not the same. The fashion industry is for that sort of very elite, high-income group in China, which makes up the Chinese consumer class. The NBA is for everybody. There were more Chinese who watched Game 6 of the NBA finals in 2019 than there are people in the entire population of the United States. Those are big numbers, and that makes them very important for the NBA. The market is very important for the NBA in China, but it also means that when the Chinese carry out these sorts of predatory practices, they may have to answer to their people in certain cases, in a way they don’t really have to on salmon, bananas from the Philippines, and things like that.

Do you think China might have taken action on the NBA because they want to shift the focus away from domestic affairs by creating a foreign enemy?

I think it certainly fits in with the Chinese domestic narrative that the West is out to get them and wants to keep China down. The tweet by this one guy, who is in the back office of the basketball team, suddenly is seen as a much more nefarious effort to try to undermine the Chinese position in Hong Kong, which is just not true. [Houston Rockets General Manager Daryl] Morey is interested in the issue and was following it, but the notion that it is somehow connected with some larger conspiracy is just not logical.

What are some actions the NBA can take to respond to this issue?

One action is that the NBA should be confident in its product, in the sense that it may make short term business sense to just cave to the Chinese and fire Morey or apologize in the NBA, but in the long term, that’s just not a smart strategy, because the Chinese could just put more pressure later on. For example, are the Chinese then going to decree that the NBA should not let anybody wear the Google Hong Kong T-shirt to a game at the Capital One Center? Succumbing to that pressure just begets more and more pressure. So, the NBA should just be confident in its product, and say that the Chinese government has to respond to the Chinese people for these decisions they make because there’s no substitute for the NBA.

The second is the notion that I don’t think that it is the role of the NBA to be out there politically by supporting Hong Kong protesters or supporting the freedom of the Uighurs from the concentration camp. It’s not the NBA’s role to do that, although I’m also not saying the NBA’s wrong to do that. However, if one of its players or one of its coaches makes a statement as a human being about what they see happening in Xinjiang or in Hong Kong or any other place, the NBA should not shut them down, because they’re making those statements not as representatives of the NBA or as a political mouthpiece of the NBA. They are making their own statements, and so, whether explicitly or implicitly, they should not be shut down.

Do you think the West should also hold China accountable for its actions?

We should hold them accountable for their actions in the sense that, when they’ve done this in the past to the Philippines, to the Gap, to Marriott, or whatever else, there is really no cost to the Chinese government or to the Chinese people for doing this, just because the impact was so small in terms of affecting the everyday lives of Chinese citizens. However, arguably this actually does affect the everyday lives of Chinese citizens who are basketball fans, which includes hundreds of millions of Chinese. This is a strategy they have implemented in the past that they have assumed has no cost for the Chinese people. But in this case, I think it was a reflexive reaction to do the same thing, because this arguably could have cost the Chinese people. Now, the government has to answer to the people for why they did this.

I think, in many ways, maybe the Chinese government feels like they overreacted, but at this point, they can’t back down, and I don’t think the NBA should back down. I think it should certainly not fire Morey, and it should not gag its players. The two sides are kind of in a place now where it’s not easy for them to find a way out.

No, I don’t think it’s the place of the U.S. government to step in. I think for most of these companies, when things like this happen, their reaction is not to escalate it, but rather to try to downplay it, and to get over it as quickly as possible so that they can get back to making money. Rarely do they want to escalate it to the political realm. I don’t think this particular government is going to somehow make political statements in support of the NBA, and probably the NBA doesn’t want it that way either.

Victor D. Cha is a Professor of Government who holds the D.S. Song-KF Chair in the Department of Government and School of Foreign Service at Georgetown University. Outside of Georgetown, Dr. Cha is a Senior Adviser at the Center for Strategic and International Studies in Washington, DC. He previously served as Director for Asian Affairs at the National Security Council from 2004 to 2007. His twitter handle is @VictorDCha.