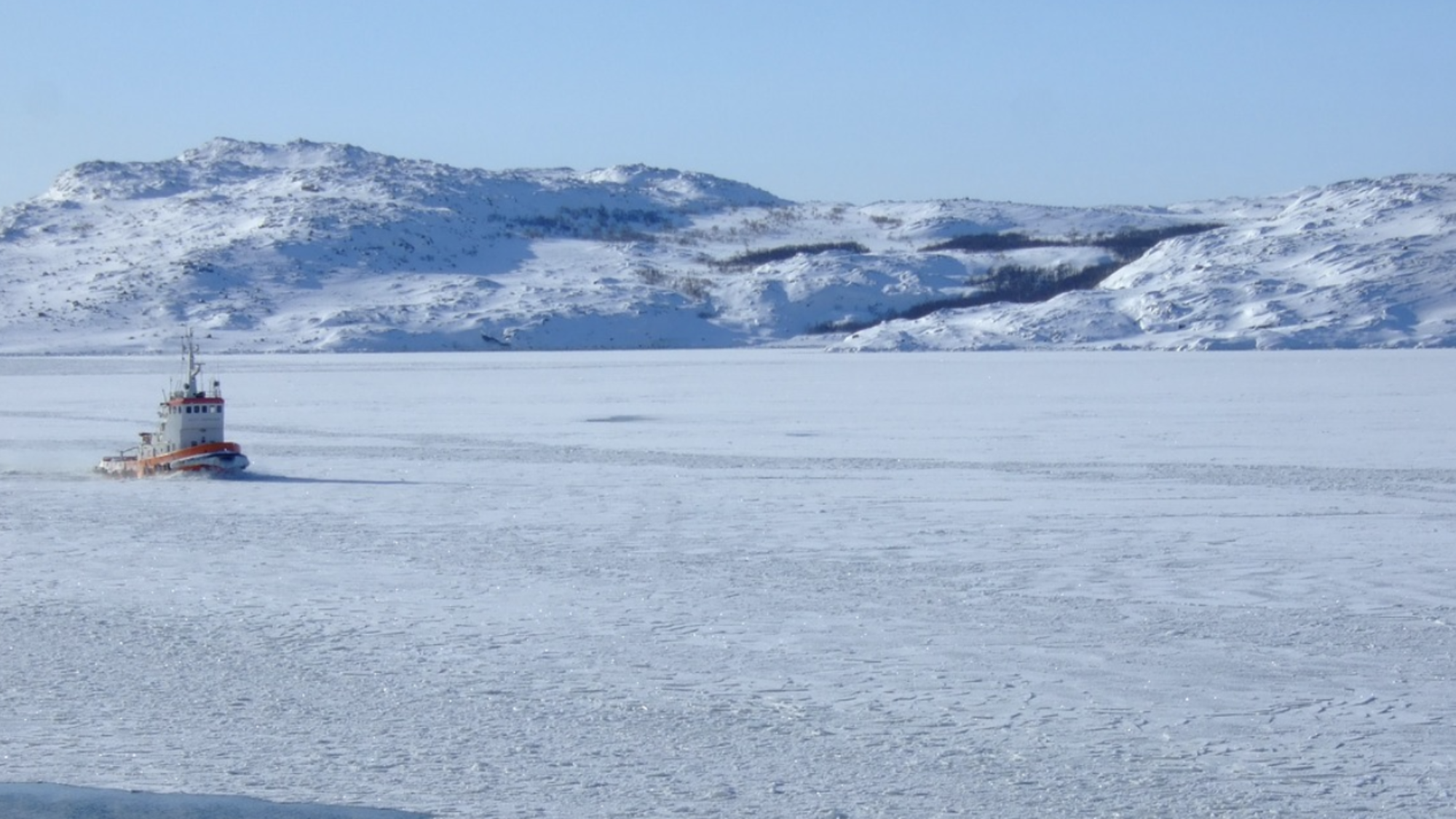 Title: The Arctic is Transforming… Can We?

As the world rightfully frets about the impacts of a changing climate, the term climate change does not accurately describe what is happening in the Arctic. Snow cover is diminished; mile-thick ice caps are melting at an extraordinary rate; summer sea ice—including the last of the multiyear sea ice—could be gone in fifteen years; permafrost, the frozen earth that is the physical underpinning of nearly one quarter of the Northern Hemisphere, is quickly thawing and buckling; massive wildfires are burning both boreal forests and tundra; and the entire region is changing color – from white to green and blue. As scientists warn of the catastrophic implications of warming in excess of 1.5° C worldwide, the Arctic is already locked into an estimated 4-5° of warming by mid-century.

This metamorphosis has dramatic implications for ecosystems in the region. Early indications show that ecosystems are rearranging at every level. Near the base of the food chain, fatty Arctic zooplankton known as copepods as far north as Svalbard are being displaced by less-nutritious copepods from farther south as part of what is being called the “Atlantification” of the Arctic. At the top of the food chain, predators such as orca whales are venturing into the Arctic farther and for more of the year. Frequent accounts of mass bird and seal die-offs point to the increasing ecological impacts of starvation events and algal blooms.

The word “change” feebly misses the mark: the Arctic is transforming into a warmer, wetter, and less predictable climate state before our eyes.

Not surprisingly, these changes are dramatically affecting the livelihoods and subsistence way of life for the four million or so people who live in the Arctic. Some 10 percent of these people, and the majority of those living in the North American Arctic, are indigenous to the region. Their families have learned to thrive in the Arctic over many thousands of years, but no humans have experienced this rate of change in the Arctic.

Outside of the cities in the Eurasian Arctic, communities are highly dependent upon ecosystems that provide food, clean water, and, in the case of many of the indigenous people of northern Europe and Russia, forage for reindeer herds. Disruptions in ecosystems have combined with social and physical disruptions to further destabilize their way of life, increase their dependence on expensive resources from the south, and put infrastructure and entire communities in immediate danger.

It is tempting to describe these people as climate refugees, but they adamantly refuse to be characterized as victims, and with good reason—they are not acting like victims. These frontline communities are our planet’s climate change pioneers, and they are finding ways to address rapid change that will inevitably inform similar efforts worldwide.

The Arctic Council—an intergovernmental body led by the foreign ministers of the eight Arctic states to address environmental, scientific, and social concerns in the Arctic—is supporting and cataloging the efforts of frontline communities and other Arctic stakeholders to address the rapid transformation. The Arctic Council’s Sustainable Development Working Group has incorporated numerous innovative and forward-leaning initiatives into its work plan, ranging from language preservation to gender equality, food security, community energy planning, and renewable energy training.

New tools include a new app that finds the safest route to travel across unreliable ice, and another one that allows users to geotag unusual or dangerous events and sightings. In the Bering Strait, a notification system alerts village leaders if a large vessel is geo-located near subsistence hunting and fishing areas. Other projects focus on economic diversification and efficiency; the Icelandic Chairmanship of the Arctic Council is developing an inclusive blue bioeconomy framework, while the Saami people of the Eurasian Arctic are increasing the resilience of their reindeer husbandry economy with a focus on food products.

It is no accident that the Saami people use that term, “resilience,” which is defined, in the Arctic context, as the ability of social-ecological systems to persist, adapt, and transform in order to thrive in the face of shocks, stressors, and uncertainty. Resilience is a term frequently used in Western science, and it is perhaps the closest thing the Western world has to understanding the complex holistic and relational qualities of indigenous knowledge systems. It is a concept well suited to the tightly linked social and ecological systems found in the Arctic.

As described in the Arctic Council’s 2016 Arctic Resilience Report, successful resilience strategies are transdisciplinary, inclusive, diverse, and place based. They empower local communities, operate at multiple scales with multiple stakeholders, and serve as a preemptive strategy for moving effectively through change, rather than as a reactionary coping mechanism.

In a remarkable demonstration of engagement on resilience and innovation in the North, in 2017, the eight foreign ministers of the Arctic Council approved the world’s first regional resilience framework, the Arctic Resilience Action Framework (ARAF). The transdisciplinary ARAF is organized into four priority areas: improving knowledge, increasing adaptive capacity, addressing resilience barriers posed by governance, and encouraging investment in resilience. By establishing a means to foster, track, and measure resilience, the Arctic Council has created a blueprint that can be replicated around the world and is growing the community of practice necessary to implement important adaptations more widely.

Success will require leaders and communities to align Western science along common meridians with other knowledge systems in the region, particularly indigenous knowledge with its well-developed interconnections among geography, ecology, and community. Indigenous knowledge is not just a collection of facts and trends informed by thousands of years of observation; it is a way of knowing nature and sharing information that is as interactive and collaborative as it is spiritual.

While Western science is unlikely to achieve the collaborative intricacy of indigenous knowledge, resilience strategies provide an opportunity to achieve intersectional successes within a broad community of practice oriented toward similar goals and objectives. In other words, a resilience platform may provide the common ground necessary for Western and indigenous knowledge systems to better interact and reach new levels of innovation and success together. The projects and apps described above demonstrate the upside of aligning these two knowledge systems, but achieving resilience in the Arctic will require a comprehensive and well-financed effort.

In order to measurably improve resilience in the region, governments at all levels should work with civil society to advance the ARAF in close partnership with, and with strong leadership from, Arctic indigenous people. Policy actions should focus on each of the four ARAF priority areas – information and knowledge, adaptive capacity, governance and planning, and investment. Among other things, these policy actions should seek to affect the following:

Information and knowledge: In addition to enhancing the observing systems of the Arctic, policies should advance the alignment of knowledge systems by requiring that indigenous knowledge holders be included and offered leadership opportunities when developing research strategies and goals. An example would be requiring research grantmaking agencies to provide funding to expand the pool of eligible indigenous participants or train young indigenous leaders.

Adaptive capacity: Policies at all scales should foster the ability of communities to lead or frame adaptation actions that suit their specific cultural or economic conditions such that communities have the resources not only to adapt to change, but to shape it. An example would be a leadership training program for community youth, with resources in place to establish fellowships and internships at important planning or decision-making bodies.

Governance and planning: The public sector should systematically scan policy and planning structures for elements that constrain resilience, especially at the community level, and seek to remove them. New policies should emphasize transparency, inclusion, and empowerment at the local level. An example would be establishing a planning or economic development policy structure that requires local and indigenous participation, rather than merely consultation.

Investment: Governments should favor policies that guide scarce public resources to the priorities described above and that make resilience investments more attractive to the private sector. Examples include clear resilience guidelines for each sector involved in Arctic development and incentives for investing in public health and safety infrastructure.

To ensure implementation and increase the impact of the actions described above, policy-makers at the national level should develop and pass enabling legislation. An example would be the passage in the United States of an Arctic Indigenous Knowledge Act designed to incentivize and reward the above strategies.

No Time to Lose

Policies like the Paris Agreement and national actions may be able to slow the rate of change in the Arctic after mid-century, but they will not reverse the transformation now underway. As the region enters a new and unfamiliar climate state, dramatically increasing risk across the region, it is imperative that the ambition of policy and planning efforts match the level of urgency. “Random acts of adaptation” will no longer be sufficient.

Decision-makers must innovate and implement adaptation and resilience strategies that are collaborative, intersectional, and inclusive. Policy measures should embrace the complexities of multiple knowledge systems, foster social justice, and directly engage and support communities faced with new and often daunting challenges.

But we must also acknowledge, honor, and elevate indigenous knowledge holders who, thanks to their unique way of understanding and occupying the earth, may hold the key to an Arctic future we can live with and, by extension, provide the roadmap we need to navigate change around the world.

Joel Clement is a Senior Fellow with the Arctic Initiative at the Harvard Kennedy School’s Belfer Center for Science and International Affairs and a Senior Fellow with the Union of Concerned Scientists. Prior to joining UCS and the Belfer Center, Mr. Clement served as an executive for seven years at the U.S. Department of the Interior. His work has been featured in several national publications, and he has received multiple awards for ethics, courage, and his dedication to the role of science in public policy.