While climate change continues to threaten all nations, the full severity of its impacts is yet to be understood. A range of root factors including geographic location, socioeconomic conditions, and political landscape will determine the particular risks and hazards faced by different countries and communities. The southwestern coast of Bangladesh, for example, is highly vulnerable to the impacts of climate change. Salinity increases in the region continue to threaten local livelihoods and may render traditional adaptation strategies unsustainable in the long run. This article first discusses how increasing salinity affects existing adaptation strategies in coastal Bangladesh. It then argues that adaptation approaches without consideration for long-term impacts or system-wide change will ultimately be insufficient.

Climate Vulnerability of Southwestern Bangladesh
The low-lying southwestern region of Bangladesh faces pervasive socio-economic struggles and is prone to natural disasters, both of the rapid-onset and slow-onset varieties (heavy precipitation, flood, cyclones vs. salinity intrusion, drought, respectively). Currently, rising salinity levels in freshwater sources makes freshwater-based agricultural livelihoods increasingly untenable for the long-term amid climate change. While the existing salinity in the region results primarily from non-climatic factors such as upstream water withdrawal and development activities, climatic drivers such as sea level rise, warming temperatures, increasing rainfall variability, and higher tidal surges are also expected to contribute to rising salinity levels. A recent World Bank study (Figure 1) suggests that climate change will have caused significant changes in the overall river salinity in the southwestern coastal areas of Bangladesh by the year 2050. Another estimate by the Asian Development Bank highlights that overall rice production in Bangladesh will likely decline by seventeen percent by the year 2050 due to increased temperature and CO2 levels.

Figure 1: Projected river water salinity in Southwestern Coastal Bangladesh in 2050
under two different climate change scenarios: A2, the worst scenario, and B1, the best scenario

Coastal regions of Bangladesh have already witnessed the impacts of climate change for the past two decades, leading the government and NGOs to implement various small-scale and large-scale adaptation measures, most of which have been incremental in nature. Considering existing poverty in the area and increasing magnitude and frequency of climatic impacts, a large number of people still remain vulnerable to the impacts of climate change. As such, there is now a growing need to go beyond incremental measures and explore potential transformational adaptation options.

Incremental to Transformational Adaptation
In order to explore the possible need for transformational adaptation in Bangladesh, it is important to first understand how it differs from—and goes beyond—more traditionally practiced incremental measures.  Incremental adaptation usually refers to adjustments made to existing practices in order to maintain the integrity of a system at a given scale.

In order to adapt to rising salinity levels in coastal Bangladesh, scientists in the Bangladesh Rice Research Institute (BRRI) and other associated departments under the Ministry of Agriculture introduced a number of salinity-tolerate rice varieties and allowed farmers to maintain existing two-crop systems.  However, salinity levels in some areas have already superseded the threshold of these resistant rice varieties, causing production problems in some regions. 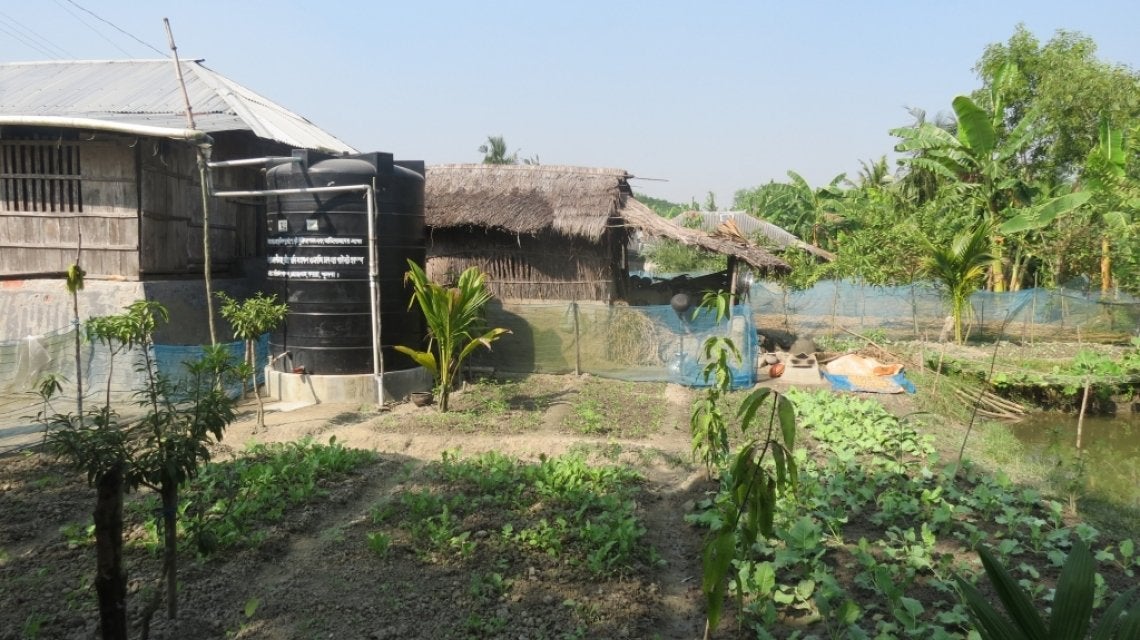 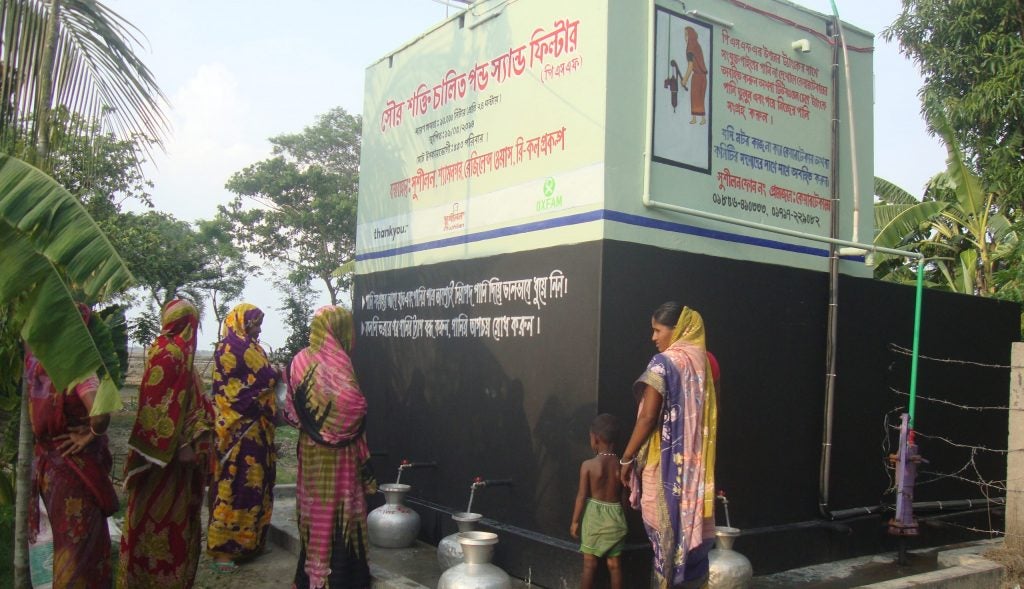 In addition to salt-tolerant rice varieties, local communities in southwestern Bangladesh have employed alternative solutions for water management, including rainwater harvesting systems and pond sand filter facilities (figures 2a and 2b). While these measures provide temporary relief from the impacts of climate change, they do not assure long-term sustainability. As climate-related threats grow, changes in salinity concentrations and increasingly frequent natural disasters in the region will likely render such ad-hoc interventions inadequate.

Therefore, pursuing transformational adaptation options in addition to incremental actions is vital to building the overall resilience of climate-vulnerable communities in coastal Bangladesh. Transformational adaptation seeks “to change the fundamental attributes of systems in response to actual or expected climate and its effects, often at a scale and ambition greater than incremental activities.”

An example of transformational adaptation is addressing existing gender inequality in Bangladesh and empowering women to participate in solutions regarding their community. In Bangladesh, gender inequality is historically ingrained within existing systems. This structural divide affords women less access to resources and opportunities, rendering them less resilient to the impacts of climate change as a result. In this regard, the Participatory Research and Ownership with Technology, Information and Change (PROTIC) program aimed to empower women by involving women farmers from three different climatic hotspots and training them to use mobile technology to access climate information. The project sought to build these women’s adaptive capacity by providing them with customized knowledge regarding climate-adaptive farming techniques and strategies. Ultimately, it strengthened the women’s leadership roles within the community. Their overall economic conditions improved, and some learned to use mobile phone technology to launch business ventures.

On a broader scale, examples of transformational adaptation also include shifts in institutional arrangements that create long-term change in the overall system, such as modification of governance structure or establishment of new plans and policies for building resilience against climate change. In this regard, the development of the Bangladesh Delta Plan 2100 (BDP2100), a plan that combines various adaptive management practices to build climate change resilience, can principally be considered as transformational adaptation. While some experts argue that the development of the plan needs to be informed by further studies and national level consultations, BDP2100 has been approved by the government and sets a foundation for long-term strategic planning towards protecting the delta.

However, it should be noted that transformational adaptation is not a silver bullet for all climatic stresses. It is critical to acknowledge and better understand the risks and uncertainty associated with transformation.

For example, one of the prominent adaptation strategies employed in southwestern Bangladesh to increase land productivity and combat the problem of rising salinity was the expansion of shrimp farming at an industrial scale. This seemingly transformative initiative caused major shifts in land use and agricultural practices. While adaptation benefits should be targeted for marginal population, shrimp farming in Bangladesh has primarily benefited landowners and wealthier businessmen and has also severely affected the local ecosystem.

Conclusion
Implementing both incremental and transformational adaptation measures simultaneously is crucial given the current climate change scenario and its many long-run uncertainties. This article does not intend to undermine the many effective incremental adaptation practices implemented in southwestern Bangladesh. However, it does acknowledge that climate change impacts will continue to develop unpredictably and will potentially disrupt existing systems and practices, making incremental strategies inadequate. While transformational adaptation can prove to be a more sustainable option, what constitutes as good transformation and what can later be deemed maladaptive is yet to be understood.  The examples stated in this article, while in principle fall under the criteria identified in various literature, are still in their initial years of implementation and require extensive trials before being declared truly transformational. As such it is now necessary to continue exploring, designing, and investing in transformational adaptation efforts that cater to both existing as well as future needs of vulnerable communities. Doing so will build these communities’ resilience against the inevitable threat of climate change.

Shababa Haque is a Senior Research Associate at the International Centre for Climate Change and Development (ICCCAD). Her work is mainly focused on understanding how the Global South is adapting to the impacts of climate change. Shababa’s research interests also include exploring the gendered aspects of climate action and development in the context of Bangladesh.

Feisal Rahman is a Post Doctoral Research Associate in the Department of Geography at Durham University. His current work focuses on enhancing resilience in Asian Deltas, and ensuring transdisciplinarity and co-production in sustainable development research. Prior to joining Durham University, Feisal served as ICCCAD’s Research Coordinator.

Professor Saleemul Huq is the Director of the International Centre for Climate Change and Development (ICCCAD) at Independent University, Bangladesh. Saleemul’s recent activities have been focusing on building negotiating capacity and supporting the engagement of the Least Developed Countries (LDCs) in UNFCCC, including negotiator training workshops for LDCs, policy, as well as research into vulnerability and adaptation to climate change in the least developed countries.