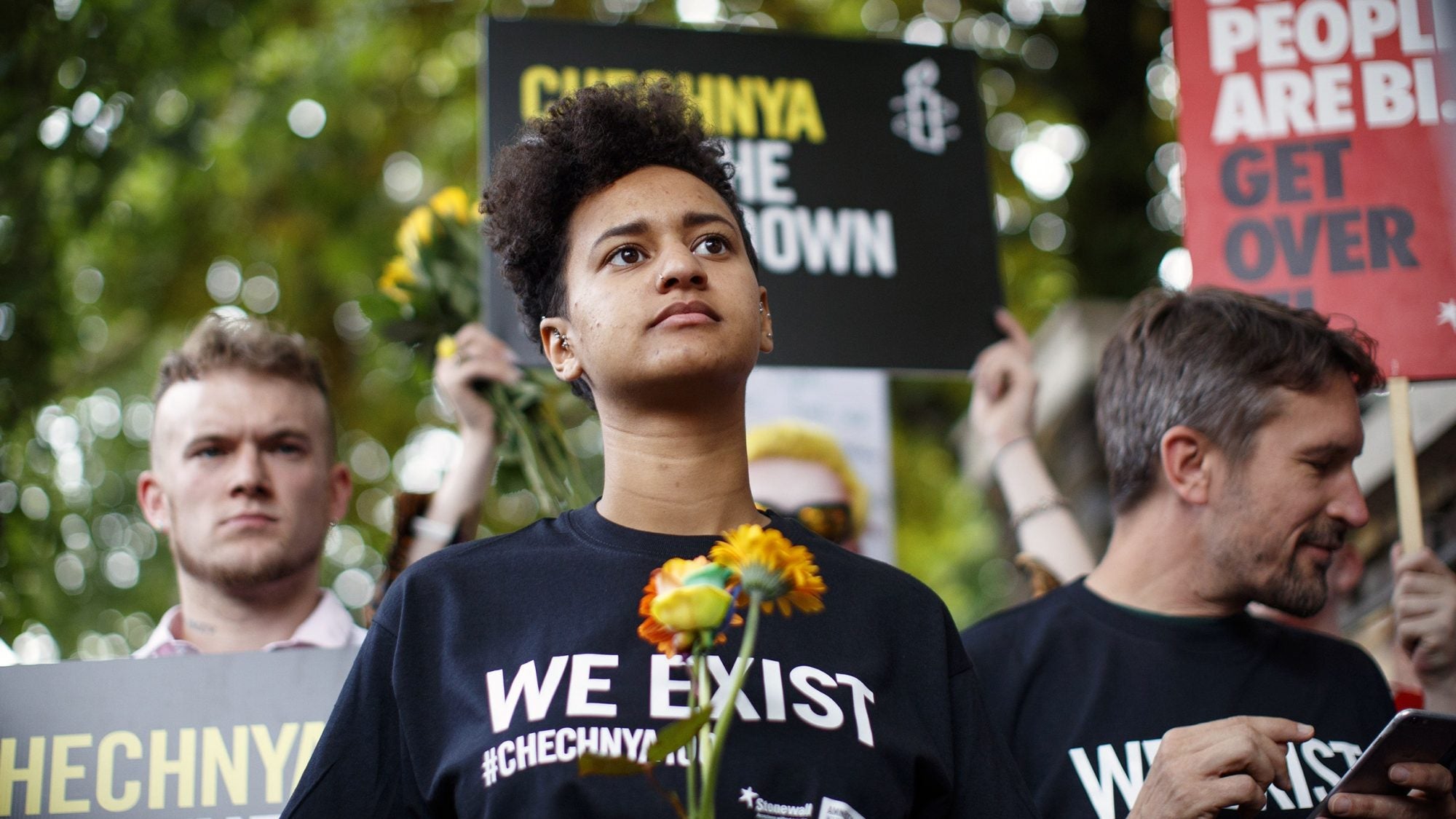 Title: PART I: A Call for Collective Punishment: LGBTQ in Post-Conflict Chechnya

A useful lens for analyzing the current regime in Chechnya is to reflect upon the wave of violent detentions of LGBTQ that began with allegations in the Russian newspaper, Novaya Gazeta in April 2017. It has now been established that at least forty individuals were illegally detained in 2018 alone, two of which reportedly died in custody after having been tortured. Such targeting of “suspect” social groups is far from new in the region. The pro-Russian Chechen government began targeting social groups at the height of the second Russo-Chechen war in the early 2000s. What we have been witnessing for the past few years is merely the extension of a strategy, first implemented by the Russian Armed Forces and then adopted by President Kadyrov’s private guard, that included forcibly disappearing alleged separatist fighters (between 3,000-5,000 persons) as the most expedient means of eradicating a political enemy. Extended logically, this trajectory now includes the eradication, detention, or torture of LGBTQ individuals who are challenging the political identity of the current regime.

This recent targeting of LGBTQ individuals displays more than the homophobia of the country’s leader, Ramzan Kadyrov. It is part of a generalized campaign to dictate societal norms and target social groups that are interpreted as threatening the hegemony of the state. Among the victims are not only LGBTQ persons and suspected rebel fighters, but women who fail to adopt and abide by traditional Islamic practices, as well as Russian and Chechen human rights activists monitoring the human rights situation or litigating in domestic courts. The President’s approach to doctrinal issues is, of course, arbitrary. Kadyrov himself determines whether certain acts are judged in line with his own variety of “traditional Chechen Islam.” This includes the select borrowing (and in some cases grotesque distortion) of the symbols and rituals of Chechen Sufism. It also includes certain aspects of Shari’a law; the banning of alcohol, the encouragement of polygamy, decreed prayer times, restrictions on women, and inevitably, the rejection of LGBTQ communities.

Many in this fiercely patriarchal society unequivocally reject LGBTQ individuals and continue to promote exaggerated forms of masculinity, virility, and physicality. Yet Chechen society has always been aware of the existence of these communities and has largely accommodated their presence. What has changed is not only the state-sponsored targeting of this group, but the government demands that such individuals be dealt with by their own families, as honor killings, for actions that allegedly insult and betray the honor of the teip, the family, or society. Since the notion of the familial unit is integral to the President’s Islamization policy, he has openly advocated for the removal of LGBTQ persons in order to “to purify our blood.”

The practice of forcing families to hand over their children or relatives to the government began soon after military amnesties were instituted in the wake of the second Russo-Chechen war. Once it became clear that many Chechen fighters would not accept the terms of the amnesty, their own families were urged to detain them. As of July 2015, for example, fifteen homes, belonging to families of suspected rebel fighters were burned down by the government as retribution for the alleged actions of their relatives. Similarly, the Chechen President has pursued a campaign that emphasizes the collective responsibility of families for women who break so-called traditional codes. He stated that while he cannot openly encourage the commission of homicide, he nevertheless encouraged families to retaliate against such behavior. Most recently, in response to the detention of over 100 LGBTQ individuals, the President insisted that such persons do not exist in Chechnya – “If there were such people in Chechnya,” he noted, “the law-enforcement organs wouldn’t have anything to do with them because their relatives would send them somewhere from which there is no returning.”

To suggest that LGBTQ persons have never existed in Chechnya, as the President recently tried to do, reflects the complete exclusion of such communities from power, opportunity, and security in the region. Turning ethnic Chechens against each other might well be explained by multiple facts, but the animating factor was the political process of so-called “Chechenization,” instituted by the Russian government alongside its Chechen supporters, soon after the beginning of the second Russo-Chechen War in 1999. Its chief modus operandi was to secure stability and peace in the region. Up until 2015, Russia has fed millions of dollars into the region for reconstruction and social services. The results have been impressive: new housing developments, state structures that work (if not adequately or judiciously) they are paying pensions and providing very basic social services. One cannot vouch for the quality of the vast number of construction projects (laborers have repeatedly complained of not being paid) but the reconstruction is evidence of material progress.

But “Chechenization” also managed to turn ethnic Chechens against each other and allowed for the rise of a violent authoritarian leader. The Russian state has not colonized Chechnya in the classical sense by robbing it of resources. Instead, the policy of the Putin administration has been to give Chechnya more and more aid in exchange for regional security. This exchange includes a forgiving degree of tolerance for the violent extremes of the republic’s leader. President Kadyrov himself is ultimately driven by a fear of the return of separatist fighters who will challenge his power, no doubt ending in his death. Quite obviously, he has generated a social policy that reflects that fear, seeking societal support for conservative policies in search of his own form of social capital.

In the past, President Kadyrov engaged in these policies when the threat to his regime stability was high, allowing us on some level to predict when and how he might respond. No doubt tensions within the republic have grown since 2016. Firstly, as a result of an economic crisis that has pushed many within the republic into a state of deprivation. Secondly, reports attest that the security situation has been declining since 2015. In 2019, an assassination plot against Kadyrov was averted, but casualties resulting from armed clashes between security services and insurgents in Chechnya has risen by forty-three percent since 2015. These attacks have either been inspired or claimed by the Islamic State and have escalated since the beginning of 2020.

Chechnya has never fully de-militarized, nor has there been any discussion on shared ideas about post-conflict justice, accountability, or punishment. The repercussions of this absence of accountability are depressingly evident. Many Chechens understand that local elites have essentially co-opted the state in Chechnya and any attempt to mitigate the state violence through civil or political activism is extremely dangerous. Kadyrov is counting on those who, out of fear, are being forced to adjust their behavior in order to avoid becoming targets themselves. For those LGBTQ still in Chechnya, there is simply no human security. When Russia’s Justice Minister, Alexander Konovalov affirmed Kadyrov’s words that they could not find any LGBTQ persons in Chechnya in a speech before the UN Human Rights Council in May 2018, he issued a clear pronouncement whose implications are clear. That is, the government of the Russian Federation will not dispute the Chechen President’s position and will not merely relegate LGBTQ to an inferior or lesser status, but will continue to negate their very existence.

Yet if the international community, alongside national NGOs can continue to pressure the Russian authorities to conduct an investigation at the federal, rather than regional level, the chances for redress might be minimal, but the pressure has to remain. There is no chance that a regional investigation into the treatment of LGBTQ persons will take place. Tatiana Moskalkova, the Russian Human Rights Ombudsman, along with the Russian NGO, the Committee Against Torture failed to get the authorities to open a criminal investigation into the treatment of LGBTQ persons in Chechnya. The level of fear among Chechen investigators and judges is palpable today; recent litigation at the domestic level around alleged state torture is testimony to that. A complaint on the treatment of LGBTQ persons has been lodged with the European Court of Human Rights who will be left, yet again, to litigate on Russia’s human rights record.

Emma Gilligan is a Professor of History and Human Rights in the Department of International Studies at Indiana University, Bloomington. She is an expert on human rights, particularly focusing on Eastern Europe, especially Russia and Ukraine. She has researched war crimes in Chechnya, international human rights movements, and contemporary Russia. Her two books include Terror in Chechnya: Russia and the Tragedy of Civilians in War (Princeton University Press, 2011) and Defending Human Rights in Russia; Sergei Kovalyov Dissident and Human Rights Commissioner, 1969-96 (Routledge, 2004).