Since 2017, China has waged a repressive campaign against Uyghurs in an effort to destroy their ways of life. This essay considers compelled silence and compelled sound as a byproduct of this genocidal campaign. The impact on Uyghur soundscapes reveals the depth of Chinese state interference into Uyghur life and underscores the gross scale of the mass atrocity itself.

Introduction
One afternoon in June 2018, I found myself browsing in an antique shop in Östengboyi (The Stream’s Edge), a neighborhood running alongside the Id Kah mosque of Kashgar, the famed Uyghur city in China’s Uyghur Autonomous Region. Behind me, I heard a voice say, “essalamu eleykum,” meaning peace be upon you, the Arabic greeting used by Muslims worldwide. “We eleykum essalam,” I heard another voice answer. And also on you. I turned and saw two elderly Uyghur men embracing. I then looked toward the shopkeeper; surprise was written across his face. Our eyes met, but we said nothing.

Normally, their exchange would have been unremarkable. These Arabic phrases are, although sacred in origin, entirely mundane. However, these were not normal times. As early as a year before, anecdotal evidence suggested that Uyghurs had stopped using religiously inflected phrases like these lest the phrases arouse suspicions of “religious extremism.” By this June afternoon, I had been in the region for nearly two weeks, and this was the first and last time on this trip I heard any Uyghurs say these words. Each day of my visit contained myriad clues such as this that the contours of Uyghur life had changed. Dialogue among Uyghurs simply sounded different. Linguistic and other soundscapes of the recent past were now a distant memory.

This essay considers the roles of silence and sound in the slow-motion genocide playing out in the Uyghur homeland, where Chinese authorities are waging an assault on Uyghurs and other Turkic and/or majority-Muslim ethnic groups. I argue that the state is compelling both silence and sound as a way to eliminate the Uyghur identity. These sonic changes show the human cost of the state-led destruction of the most intimate aspects of Uyghur life.

Background
For decades, China has embarked on repressive, assimilative campaigns targeting the indigenous peoples of what it calls the Xinjiang Uyghur Autonomous Region (XUAR). State efforts include “Strike Hard” campaigns in the 1980s and 1990s; a move toward “bilingual” (but really monolingual) education beginning in the early 2000s; repression following the 2009 Ürümchi Uprising; and, since 2014, a “People’s War on Terror.” All of these campaigns are linked by the Chinese Communist Party’s (CCP) anxieties over the legitimacy of its governance in the region: Uyghurs see themselves as the original inhabitants of this land and have resisted assimilation for decades.

State repression has intensified since 2017. China has taken a multi-pronged approach to its assault on the Uyghurs, embarking on a massive internment campaign,[1] meting out long prison sentences, building up a surveillance state, separating families, placing people in exploitative labor schemes, and forcibly sterilizing women, among other things. Leaked government documents show that the highest levels of CCP leadership developed and approved this program and that at least one local official envisioned the end game as being to “break their lineage, break their roots, break their connections, and break their origins.” Scholar Rian Thum has aptly described the many dimensions of this campaign, commenting, “The internment and assimilation program in Xinjiang has the overall logic of colonial genocides in North America, the formalized racism of apartheid, the industrial-scale internment of Germany’s concentration camps, and the police-state penetration into everyday life of North Korea.” Other experts have stated that these actions constitute crimes against humanity and genocide.

Compelled Silence, Compelled Sound
No part of Uyghur life is left untouched in this campaign, soundscapes included. After a 2018 field trip to the region, scholar Joanne Smith Finley recounted that a Uyghur told her, “Now we don’t talk anymore.” This and the linguistic self-policing I describe in the beginning of this essay are only two examples of what I refer to as compelled silence and compelled sound—sonic practices, here dictated by the forces of the state, that shape what is and is not sayable, speakable, utterable.

Compelled silence has largely played out in internment settings. Survivors who have spoken publicly about their experiences in the camps have described long periods of silence in detention, periods when internees were explicitly disallowed from talking outside of class, talking in a specific language such as Uyghur, or talking at all. But silence is a vacuum that can be filled, and the state has used compelled sound to do just that. Another common element of survivors’ stories is being forced to memorize and recite or sing “red” (i.e., political, pro-CCP) songs, including “Without the Party There Would Be No New China” (“没有共产党就没有新中国”), among others. While in some other parts of China the singing of red songs continues as a voluntary, public event, in internment settings in the Uyghur Region it is a forced act, one that fills the void left as the lineage and roots of the detained are broken, as the state creates a vacuum of silence that it can shape and fill with itself.

Compelled silence and sound have also played out in the world of Uyghur music from 2017 to the present. Uyghur music has long been an excellent gauge of political attitudes, an expressive realm that has served for decades as a civil society-like space both despite and because of China’s repressive policies. Professional music-making in the region has long been subject to the whims of the state, and periods of political volatility have been marked by decreases in public artistic performance. This was the case following the 2009 unrest in Ürümchi. The following year, I interviewed members of a professional ensemble in the city who told me they had not performed for roughly one year. Following a brief revival in 2012 and 2013, that world grew quieter once again following the beginning of the People’s War on Terror in 2014.[2]

By 2018, I spoke with a source in Ürümchi who noted that none of the major ensembles there had, to their knowledge, performed any public concerts in at least a year despite still being required by their bosses to show up for work. Similarly, a source I spoke with in Kashgar that same summer noted that the only performances they were doing were those that they were “sent down” to counties, townships, and villages to perform. These shows were almost undoubtedly ideological in nature, containing red songs and skits with explicitly pro-CCP, nationalist themes. As of 2020, some shows appear to be taking place, though their regularity and openness to public audiences are difficult to gauge from afar. Even a professional musical world can grow paradoxically quiet, compelled into silence by the state.

Over the past several years, some of the most beloved and visible Uyghur singers and musicians have released songs that mark dramatic stylistic and thematic departures from their larger bodies of work, suggesting that authorities may have coerced them to some degree. In mid-2017, just several months after the mass internment campaign began, a singer beloved for his classical and pop styling released a Uyghur-language song dedicated to Xi Jinping. The song marks a significant stylistic departure from not only his performance style but also the aesthetic sensibilities central to Uyghur music. It opens with an introduction on the tämbur, the most virtuosic of the Uyghur lutes, but the instrument is merely a framing device that disappears as the singer begins his melodic line, which lacks the “scent” (puraq) that defines melodies in Uyghur song. The lyrics are pure propaganda: the singer praises Xi Jinping for putting light into the hearts of the people.

A year later in summer 2018, the long-hailed King of Uyghur Pop released a Chinese-language song entitled “美丽新疆,” or “Beautiful Xinjiang.” The song is remarkable for two reasons: the lyrics are in Mandarin, which the singer rarely sang in previously, and the singer refers to the Uyghur region not as the “homeland” (weten), a lightly coded word preferred by singers, poets, and others for decades, but explicitly as the colonial “Xinjiang.”[3] By August 2020, the same singer surprised members of the Uyghur diaspora when a video of him singing another patriotic song in Chinese and English was circulated following a live-streamed concert. The lyrics in the newer song liken the relationship between the singer and China to one of child and parent, and the melody is completely devoid of the musical characteristics that make Uyghur music Uyghur.

Since 2017, studios and stages where Uyghur music once thrived have grown quiet. When sound has returned to them, it has been of a fundamentally different character than before, missing the styles, themes, and aesthetics that form the heart of local musical practices. It is impossible to know exactly the circumstances in which Uyghur artists are writing, producing, and performing patriotic, pro-CCP songs. Given that a number of Uyghur performers have been detained,[4] and given that Uyghur performers almost never produced or sang songs like these in the recent past, it seems reasonable to surmise that at least some of them feel compelled to sing as a way of performing loyalty to authorities who are constantly redrawing the political lines Uyghur performers—and all other Uyghurs—must toe. Such compelled sound constitutes a violation of rights. Although the right to freely make sound is not defined in international human rights frameworks, it is nonetheless central to freedom of expression and dignified human life.

Listening to the Uyghur Genocide
Sound is both a weapon of the weak and a tool that the powerful can—and do—co-opt and abuse. In the case of the Uyghur Region, where Chinese authorities have created an environment of fear in their ongoing quest to destroy Uyghur culture, altered and unexpected sounds give clues into the depths of state intrusion into everyday life. Listening for compelled silence and compelled sound can help us to understand the tragic human dimensions of this mass atrocity: namely, the way the Chinese state exerts control over fundamental forms of human expression, over the most intimate and mundane aspects of daily life. The extent to which Uyghur music and culture more broadly will survive this attack is difficult to predict. Continuing to listen, including to the voices of brave Uyghur activists around the world, will give the international community, which up until now has been largely reticent to call this genocide by name, more indications of how they should speak out.

Dr. Elise Anderson is Senior Program Officer for Research and Advocacy at the Uyghur Human Rights Project in Washington, DC. She earned dual PhD degrees in Central Eurasian Studies and Ethnomusicology from Indiana University-Bloomington in 2019. Her research has long focused on various aspects of music among the Uyghurs, and her writing has appeared in Asian Music and the LA Review of Books, among other outlets.

[2] The ethnographic interviews and observations referenced in this essay occurred between 2010 and 2018.

[3] “Xinjiang,” which means “new territory” or “new dominion,” only became a name for the region in 1884, when it began appearing in Qing documents. Uyghurs and other indigenous inhabitants of the region have long preferred to call it by other names, including East Turkistan or, more recently, the Uyghur Region.

[4] Many of these musicians are rumored to have been released, though their precise whereabouts at time of publication are difficult to ascertain. Performers who have appeared to disappear into state detention at one point or another since 2017 include Abdurehim Heyit, Ablikim Kalkun, Sanubar Tursun, Ablajan Awut Ayup, and Zahirshah Ablimit, among others.

This article analyses the behavior of Brazilian institutions, in particular Congress and the Supreme Court, in reaction to attacks and threats…

The COVID-19 pandemic highlights the important intersections of climate change, food security, migration, and socio-economic inequalities. An understanding of the gendered dimensions of these interconnected global concerns is crucial… 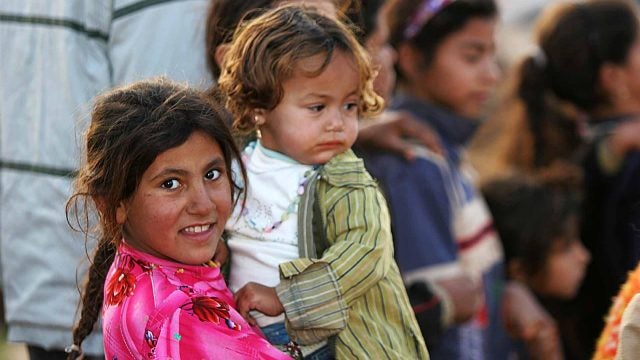 Neither Seen nor Heard: The Invisibility of Children in the Global Politics of Peace, Security, and Responses to COVID-19