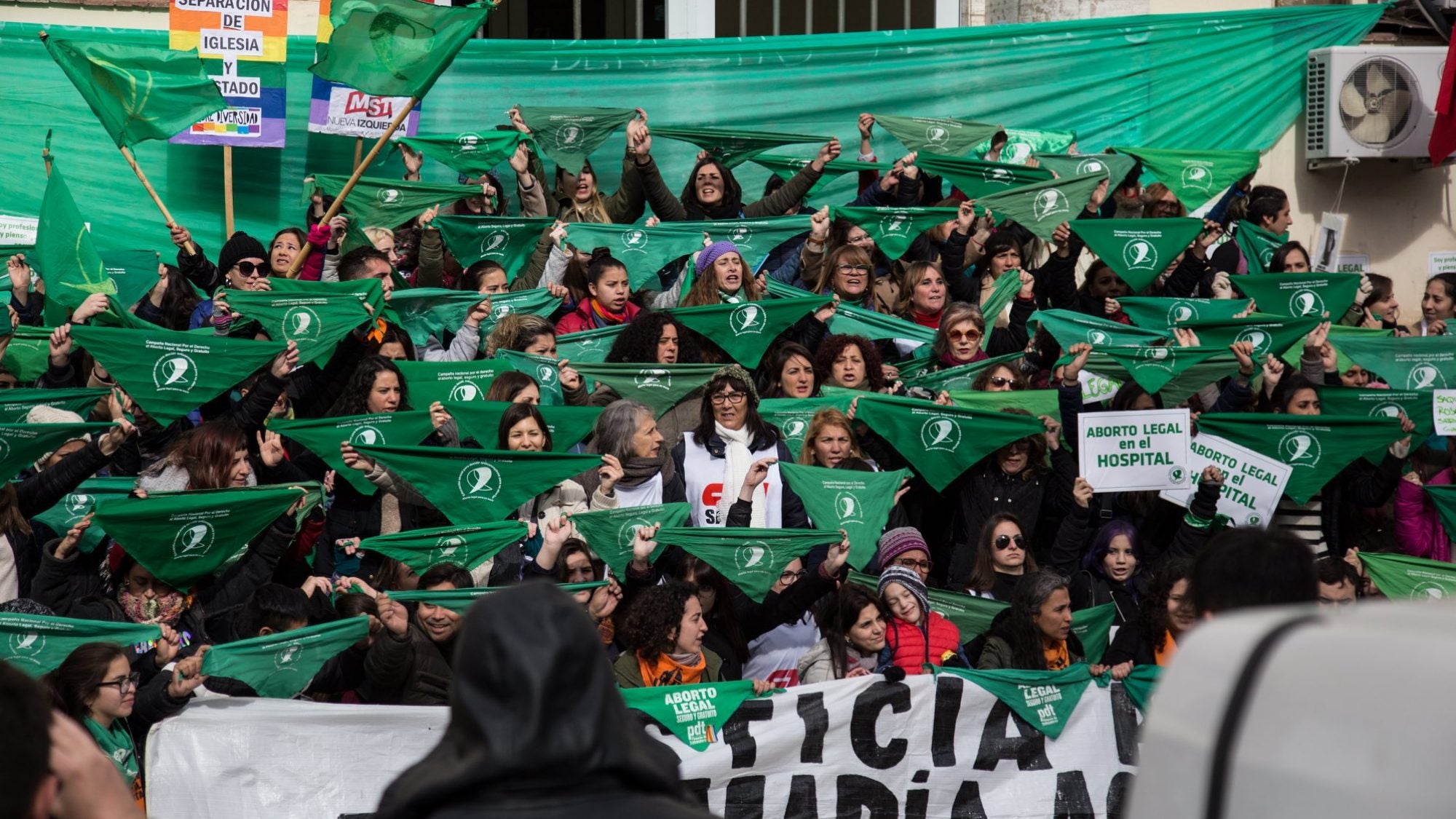 In December 2020, legislators in Argentina made the historic decision to legalize abortion. While the executive branch of government promoted the initiative and the resulting policy change, this achievement is not simply owed to any one politician or political party. Rather, it is the outcome of years of persistent organizing by activists dedicated to advancing the right to “legal, safe, and free” abortion.

For nearly a century, abortion in Argentina was defined as a crime except under very limited circumstances. This was expected to change in December 2020. After two lengthy legislative sessions in the national Congress—one in the Chamber of Deputies earlier in the month and another one in the Senate—a bill to legalize abortion was approved at around four o’clock in the morning on December 30 after twelve hours of vigorous debate. Paralleling the response outside of Congress during the previous debate in the lower house, a large crowd of abortion rights supporters donning the movement’s green pañuelos (kerchiefs) erupted in cheers and tears of joy as the Senate votes were revealed: thirty-eight in favor, twenty-nine against, and one abstention. The bill was sponsored by the executive branch, and President Alberto Fernández signed it soon after. Thus, the phrase Es Ley (“It is Law”) came to replace the aspirational slogan Que Sea Ley (“Let it be Law”) that had animated the movement.

This activist achievement is nothing short of epic. There were a number of significant obstacles to progress in Argentina on the question of abortion legalization. Among these were the COVID-19 pandemic, obstructionist conservative groups and legislators, and the influential Argentine pope. These challenges, coupled with the accumulated hopes of generations of activists and the victories and setbacks of years of patient organizing, all converged to make the abortion debate of late 2020 both contentious and filled with expectation.

The scale of the celebrations in Argentina and among supporters from around the world matched the magnitude of the historic achievement. The law shifted from criminalizing abortion (except in the case of rape or risk to health or life) to allowing voluntary abortion through the first fourteen weeks of pregnancy. Legal and accessible abortion has been a long-sought feminist objective, one for which activists in Argentina worked tirelessly for decades. Legalization is a crucial recognition of the rights of not only women but also of people with other gender identities who may become pregnant and need an abortion, including trans men, non-binary, and gender non-conforming individuals. Furthermore, these developments promise to have ripple effects in other parts of Latin America, as feminist activists may draw renewed energy, resources, and inspiration from this victory. Glimpses of this trend can already be seen in Chile, where the abortion debate has been reactivated in Congress, just days after Argentina legalized abortion. Argentine activists are extending their solidarity to Chilean feminists in the same way that they welcomed international messages of support during their legalization struggle.

That the change in abortion policy in Argentina happened in the middle of a devastating global pandemic is truly remarkable. But feminist organizing during difficult times is not unprecedented in recent Argentine history. In fact, Argentina has lived through other grave crises before, such as the 2001 economic collapse, which created openings for certain social transformations, including the expansion of feminist and women’s movement activism. Social movements have a critical role to play in times of crisis, as they can shape the direction of change. During the pandemic in 2020, feminist organizing did not stop. For example, assemblies of women workers met through Zoom and launched online awareness campaigns and other offline actions. Feminists in the government pushed for policies to tackle gender inequalities exacerbated by the pandemic. Members of Ni Una Menos (Not one [woman] less) and other activists continued denouncing feminicides and the intensification of gender violence. And women in poor neighborhoods organized ollas populares (communal kitchens) and other initiatives to meet the needs of their communities. In this way, abortion rights activists did not allow their cause to be drowned out by other urgencies. Rather, they responded to the compounded challenges of the pandemic through adapted strategies, from socially-distant performances and slide projections on buildings, to street protests with face masks and different modes of mobility (e.g. walking, riding bicycles, driving cars). Notably, activists highlighted the increased difficulties in the access to sexual and reproductive health during the pandemic and mobilized these challenges as part of the fight for abortion legalization, arguing: “It is urgent, it is a priority: Legal Abortion 2020.”

The successful push for legal abortion even in the face of adversity would have been unlikely without a strong base of organization, networks, and knowledge collectively developed over many years. Particularly important was the launch of the National Campaign for the Right to Legal, Safe, and Free Abortion  (also known as “the Campaign”) in 2005. This is a broad coalition of hundreds of organizations, including feminist and LGBTQ+ activists, labor unions, human rights groups, associations of indigenous communities, healthcare workers, students, educators, lawyers, journalists, migrant women, cultural organizations, and many more. The Campaign achieved a milestone in 2018 with the first parliamentary debate on abortion legalization. While the bill failed in the Senate at that time (after approval in the lower house), activism for this cause only strengthened.

After abortion became solidly established as part of the public agenda—an accomplishment in and of itself given the taboo character of the topic—politicians could not eschew the issue. So much so that legal abortion became an electoral promise of now President Alberto Fernández from Frente de Todos (Front for All). After delays caused by the pandemic, the Executive presented a bill to legalize abortion, which incorporated many aspects of the demands by the National Campaign for Legal, Safe, and Free Abortion. After congressional approval, Law No. 27.610 (Access to Voluntary Interruption of Pregnancy) was promulgated on January 14, 2021. Whereas presidential support was no doubt important for abortion legalization, this achievement is not simply owed to a particular politician or political party. Rather, as many have pointed out, it is the result of decades of persistent organizing by activists who envisioned and fought to create a world where women’s full citizenship is recognized, where individuals have a right to decide about their bodies no matter their gender, and where intersecting social inequalities that constrain the very possibility of reproductive choice give way to social justice.

The abortion rights movement in Argentina placed abortion in the context of a democratic agenda. Rather than conceptualizing abortion as just a matter of privacy or choice—that is, state non-interference in personal decisions—the movement also linked abortion with social justice, human rights, and public health, among other issues. Activists also voiced arguments about sexual autonomy and desire, including in the context of the pandemic. In a period when it was common to hear that the most urgent matters such as pandemic response should be prioritized, activists insisted: Nuestro Deseo es Urgente (Our Desire is Urgent). At the same time, the movement never stopped fighting against the damaging effects of abortion illegality—its relation with secrecy, stigma, and danger—and the social inequalities that enabled negative outcomes, such as morbidity and mortality risks disproportionately experienced by economically and socially marginalized women. Years before legalization, groups such as Lesbianas y Feministas por la Descriminalización del Aborto (Lesbians and Feminists for the Decriminalization of Abortion) and Socorristas en Red (Network of First Responders) started providing information and supporting people in need of abortion, specifically to avoid the harms of illegal and clandestine abortions, advancing rights that were yet to be codified by law.

While the approved abortion law reflects some compromises—such as conscientious objection by providers, which in practice might be used as an obstruction tool—this legislation offers a robust framework for abortion rights. For instance, the law strives to guarantee access to abortion that is gratuito (free of charge), mandating that such services are covered by the public, private, and social insurance systems. In other words, abortion is conceptualized as a right that is not just available to those who can pay or enjoy other privileges. This is in line with the Campaign’s demands that the state guarantees abortion access to anyone who needs it. Whereas in the United States abortion rights supporters are often described as “pro-choice”—a notion critiqued as too narrow by feminists of color advocating for “reproductive justice”—in Argentina the most prominent coalition for abortion rights has framed the issue in terms broader than choice, and requiring more than mere legality and non-interference in private decisions.

Interestingly, the abortion bill was discussed in tandem with another one known as the “Plan of 1,000 Days” (Law No. 27.611), an initiative to also support those who wish to continue their pregnancies with financial and other forms of assistance. This bill was unanimously approved in the Senate on the same day that Congress passed the abortion legalization bill. The combination of the two laws, though also dependent upon the nature of implementation, advances a holistic notion of reproductive rights that includes both the right to have a child and to not have a child. Still, while motherhood is culturally celebrated, the decision to forego pregnancy has traditionally been stigmatized—also partly reflected in the differential ways that many legislators voted with respect to each bill.

Argentina’s abortion rights movement has helped expand rights and possibilities. Its success is a testament to the importance of coalition building, intergenerational organizing, and activism at multiple levels, from grassroots efforts to the halls of government. It has built feminist power in numerous spaces, including social movements, labor unions, universities, health organizations, artistic collectives, and professional associations, among others. This persistent activism has influenced the three branches of government using the tools of democracy, while also claiming abortion as a democratic right. What contributed to the movement’s success was not homogeneity or lack of conflict but its ability to grow in diversity, deftly navigate differences, build bridges, learn, and change. This vibrant movement—so deeply rooted in feminism—has become a significant political force in Argentina that both state and society can no longer ignore.

Barbara Sutton is a Professor in the Women’s, Gender, and Sexuality Studies Department, University at Albany (SUNY). She is also affiliated with the Sociology Department and is an associated member of the Latin American, Caribbean, and U.S. Latino Studies Department. She is the author of Bodies in Crisis: Culture, Violence, and Women’s Resistance in Neoliberal Argentina (2010) and of Surviving State Terror: Women’s Testimonies of Repression and Resistance in Argentina (2018).