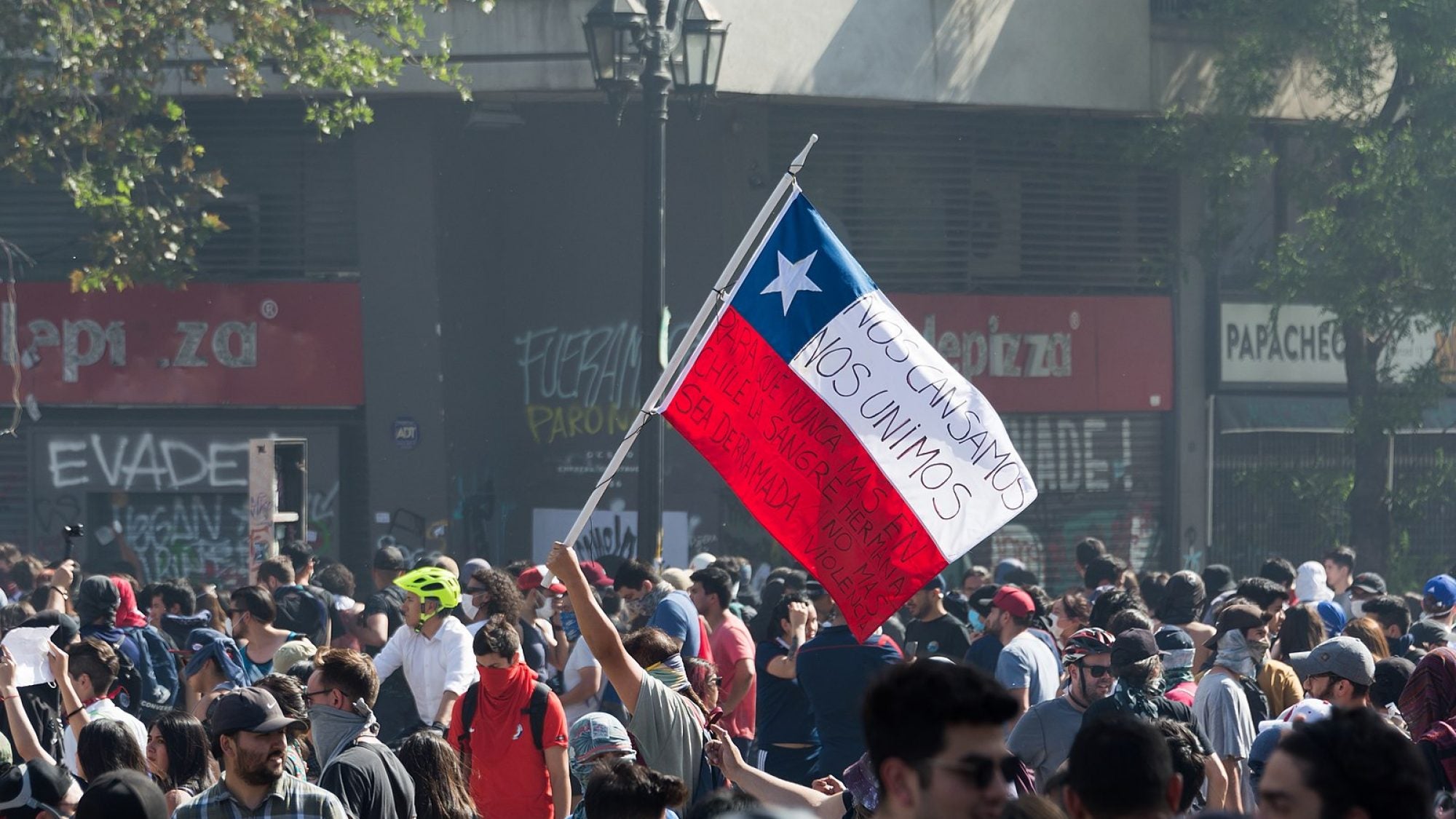 In an October 2020 referendum, Chileans overwhelmingly voted to begin drafting a document to replace the 1980 Augusto Pinochet-era constitution. Chile now faces the test of satisfying demands for deep economic and social transformation while avoiding a potentially destabilizing populist constitution.

Chile is at its most important inflection point since its 1990 return to democracy in the wake of the Pinochet dictatorship. In October 2019, the country exploded in violent protests, culminating in a gathering of over a million people—in a country of only nineteen million—in Santiago’s Plaza Italia, now dubbed Plaza de la Dignidad, or “Dignity Plaza.”  Protestors’ demands shifted from issues of inequality to include the replacement of the 1980 Augusto Pinochet dictatorship-era constitution. Over the course of these protests, the conservative government of Sebastián Piñera conceded to a plan for a constituent assembly to write a new constitution. When Chileans go to the polls on May 15 and 16, 2021 (the vote was originally scheduled for April 11 but was postponed due to a resurgence of coronavirus), they will need to elect new faces to the convention. It is essential newcomers understand that constitutions provide the framework for democracy, rather than an opportunity for redistributive policy commitments. While Chile must tackle inequality, it must be done in parliament, within the framework of a more workable and representative constitution.

Long considered a model of political stability and economic success by outsiders, Chile has been simmering with social discontent and political malaise for decades. Hundreds of thousands of protestors brought the country to a standstill over inequities in education in 2006, over the private pension system in 2016, and over patriarchal privilege and sexual abuse in 2018. Nonetheless, what happened in October 2019 was different. A broad and diverse array of Chileans took to the streets. Workers demanded better wages. Feminists and women wanted an end to patriarchal violence. Students wanted free higher education and retirees demanded a dignified pension. As protests played out, entire swaths of Santiago were destroyed with looting and attacks on property.

The scope and severity of protests ultimately compelled the Piñera government to concede to protestors’ demands. The president agreed to suspend transit fare increases, raise pensions and the minimum wage, increase taxes on the rich, and reduce medicine and electricity prices.  Yet protestors viewed these reforms as too little too late and expanded their demands, calling for a scrapping of Pinochet’s constitution. On November 15, 2019, reluctant governing parties and the opposition came to a Twelve Point Agreement for Social Peace and a New Constitution.

The agreement spurred debates among the government and the opposition, prompting a two-part popular referendum. Citizens were asked, “Do you want a new constitution?” and, regardless of their responses, “What kind of body should write a new constitution, a convention made up of citizens or one composed of half citizens and half members of Congress?” The “who” part of the question intensified.  Pressure from feminist activists and women in Congress resulted in an agreement for gender parity in the constituent convention. Later, indigenous leaders extracted a guarantee that 17 of the convention’s 155 seats would be reserved for Chile’s nine First Nations.

Amid a raging pandemic on October 25, 2020, Chileans went to the polls to determine the country’s political fate. Surpassing most opinion poll estimates, seventy-eight percent of citizens opted for a new constitution, and seventy-nine percent chose a constitutional convention composed wholly of citizen representatives.

Much of the international press tied protests to transport fee hikes, although this was just the spark that ignited an explosion long in the making. Protesters took to the streets in response to thirty years of injustice. They focused on social and economic inequality, including health, education, and retirement system inequities, all privatized during the dictatorship. Police corruption, high utility costs, price setting collusion for staples, and excessive profits for private pension scheme administrators all contributed to a sense of injustice, prompting protestors to adopt the slogan, “It’s not about thirty pesos; it’s about thirty years.”

Though the center-left governments that oversaw the first two decades of democratic government engaged in political reforms, they left Pinochet’s economic legacy largely intact. The Pinochet-imposed 1980 constitution created an institutional straitjacket for reformers. It provided limits on representation including a powerful presidency, an electoral system that favored right-wing parties, a conservative Constitutional Tribunal that could overturn legislation at any point in the legislative process, and high quorums in Congress. The constitution also underwrote Chile’s extreme brand of neoliberalism, with strong guarantees for private property.

While the constitution created barriers to reform, elites’ fears of upending Chile’s economic success story further stagnated reform. Even much of the left accepted neo-liberalism and free markets as part of Chile’s post-authoritarian DNA. Combined with a “politics as usual” elite unlikely to challenge Pinochet’s legacy, the injustices woven into Chile’s political, social, and economic fabric remained unaddressed.

History in the making

Throughout this process, Chile has made history in several ways. Although social movements often drive incremental change, they rarely elicit such dramatic change so quickly. Chilean citizens forced elites to undertake reforms, providing a stunning example of the power of social movements. Moreover, modern constitutional conventions are rare, but modern peacetime constitutional conventions are exceedingly rare. Most occur immediately following a civil war, such as in Nepal in 2008, or following the end of a dictatorship, such as in Tunisia during the 2011 Arab Spring. If successful, Chile will be among the few countries to draft a new constitution in a time of peace, and the first with a convention composed of half men and half women.

The referendum’s victors are optimistic that Chile may finally move past the Pinochet Constitution, opening the doors to necessary reforms. However, the process fraught with potential pitfalls.

Rather than a constituent convention in which everyday people come together to draft a new constitution, Chilean convention rules require candidates to register a party affiliation or collect enough signatures to run as an Independent. Sitting politicians can also participate if they resign from their current position. Thus, despite widespread disgust with political parties, some of the currently serving elites will participate, potentially undermining the legitimacy of a citizen assembly.

The candidates finalized in February of 2021 do include new faces. Eighty percent of the candidates have never held elected office before. Nonetheless, as the country approaches convention elections, it remains to be seen whether Chileans will opt for new faces or elect members of the same discredited political elite. To incite change, Chileans will need to opt for outsiders rather than party regulars as constitutional convention candidates.

The success of the process is also not guaranteed. Convention rules require a two-thirds majority to approve all proposals—a daunting reality given all the issues on the table. In addition to divisive social guarantees, the assembly must resolve complex institutional questions. Should the structure of government be presidential or parliamentary?  What type of electoral system should be adopted and how will electoral districts be drawn? Is a unitary or federal system more desirable?  How will gender equity be guaranteed at all levels of government?  Should drafters follow Bolivia’s and Ecuador’s lead and constitutionally recognize Chile as a pluri-ethnic country?

Walking a line between satisfying demands and avoiding populist tendencies begins with the convention itself. Successful drafters will need to adopt mechanisms for consensus building and compromise. Constitutions provide an avenue for the expression of minority voices, even if that minority has a history of economic and social exploitation.

In the longer term, the convention will determine the quality and durability of the constitution that is eventually adopted. This give and take mentality can be institutionalized by retaining what works in the Pinochet constitution and elements that fit with Chile’s constitutional tradition. Guarantees of basic human rights and free expression must be maintained, as well as institutions like the Contraloría General de la República that have limited corruption and ensured transparency.

At the same time, however, framers must scrap neoliberal aspects of the constitution related to property, strengthen social and cultural rights of citizens and recognize Chile as a multi-ethnic country, and explicitly affirm gender equality as a foundation of Chilean society.

From an institutional perspective, a better constitution should establish a balanced equilibrium between Congress and president. It should abolish high quorums to pass legislation and limit the expansive powers of the Constitutional Tribunal and establish mechanisms for wider citizen participation.

It is also clear what the framers must avoid, as some public debate suggests that measures to battle inequality should be enshrined in the document: more equality, and better pensions, education, and health care. This puts members of the convention  in a tough spot because demands for economic justice must be satisfied without falling victim to potentially destabilizing populist options. Framers need to understand that constitutions are frameworks that guarantee rights and delineate democracy’s basic institutional design—they do not involve policy statements. For example, a constitution can establish health as a fundamental right, but it should not determine who pays for it.

Chileans have demanded change and representation. Yet while they have started down the path of change, it is still uncertain whether the newly elected constitutional convention representatives will cast aside Pinochet’s long shadow and agree on a framework for a fairer and more just society.

Peter M. Siavelis is a Professor in the Department of Politics and International Affairs at Wake Forest University. He has published on many aspects of Latin American and Chilean politics including candidate selection, election systems, presidencies and informal institutions.  His most recent edited book is Democratic Chile: The Politics and Policies of a Historic Coalition (with Kirsten Sehnbruch), and he has published in journals including Comparative Politics, Comparative Political Studies, Electoral Studies, Presidential Studies Quarterly, and Latin American Research Review.