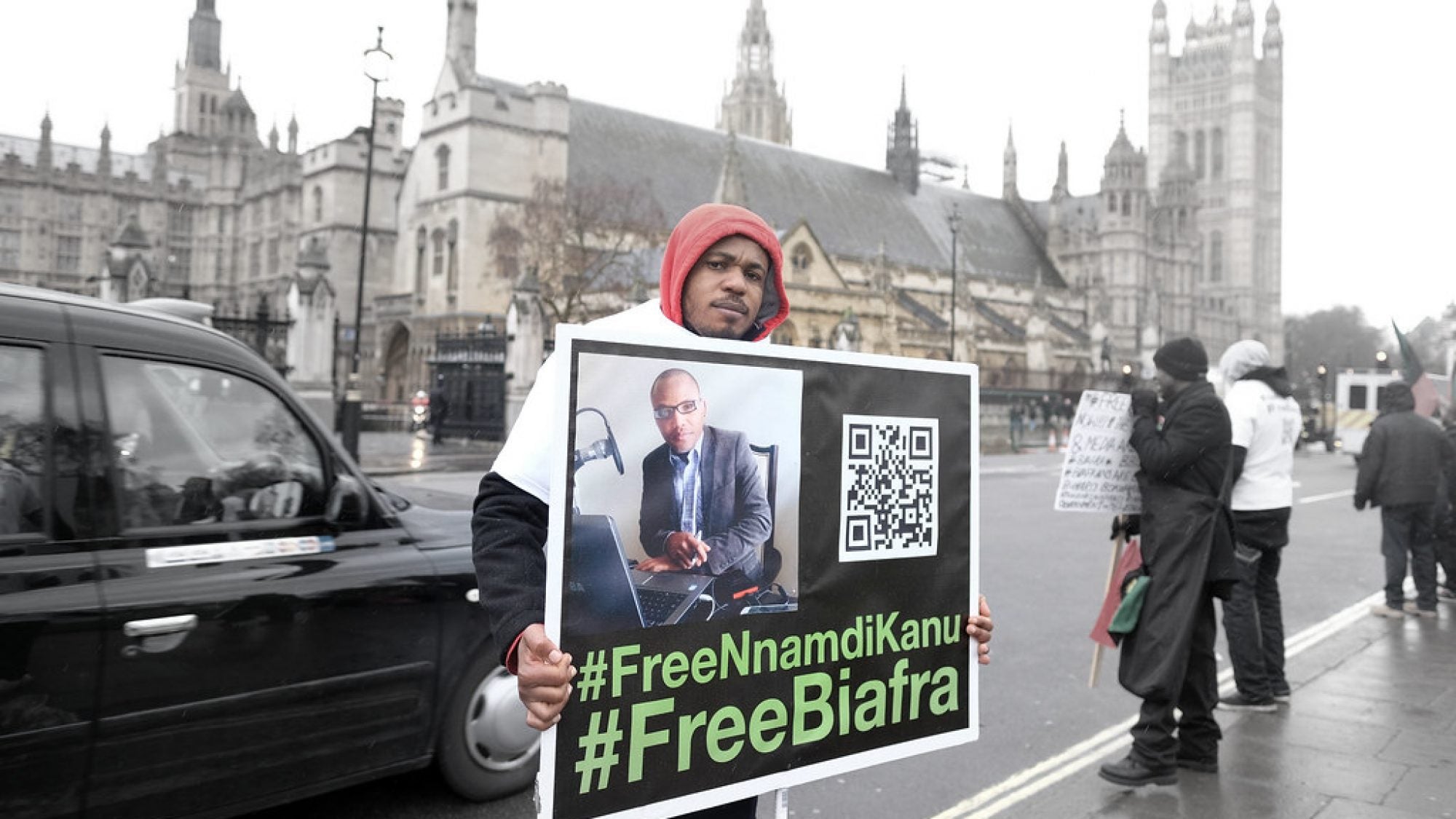 Half a century after the end of its civil war, Nigeria is seeing a revival of the secessionist movement that started it. However, the cause that “Biafran” activists espouse today is very different from the one their grandparents fought for.

In the late 1960s, Africa’s most populous country, Nigeria, nearly disintegrated when its eastern region broke away as the Republic of Biafra. After two and a half devastating years, Biafra was defeated and reintegrated into Nigeria. Igbos, the ethnic group who made up most of Biafra’s population, made their peace with Nigeria’s military government or went into exile. Recently, Biafran activism—long buried by the dictatorships that ruled Nigeria after the war—has come to the surface. Fifty years after Biafra’s defeat, this neo-Biafran movement draws its energy not only from eastern Nigeria, but also from the global Igbo diaspora.

The Biafran cause was marginal in Nigerian politics after the war’s end, especially given the other, more potent threats to Nigeria’s unity that emerged in the 1980s and 1990s, like the crisis in the oil-producing Niger Delta region. A handful of activists continued to carry the torch for Biafran independence from exile, but few paid them much attention. Nigeria’s security forces saw them as quixotic and annoying, but not threatening. Since the return of civilian democracy in 1999, however, Biafran activism has become an important part of Nigeria’s political landscape. The two largest neo-Biafran organizations are the Movement for the Actualization of the Sovereign State of Biafra (MASSOB) and Indigenous People of Biafra (IPOB). In the early 2000s, MASSOB organized support for Biafran war veterans, alongside strikes and protests. It was avowedly peaceful: MASSOB was known for its soccer leagues as much as its politics. IPOB was founded in 2012, and its leaders took a more combative tone. The goals of these two organizations (and many smaller ones) have changed over time, and though they vary between factions, they converge around two central objectives: protecting Igbos and securing political independence for eastern Nigeria.

Biafran activism is increasingly public. It is a protest movement rather than a party, and many find it appealing because it appears to reject the normal way of doing politics—Biafran activists seek not a seat at the table, but to overturn the table altogether. In the last five years, demonstrations in eastern Nigeria have become regular events. They happen abroad too, where they dovetail with local politics like Brexit or the US presidential election. In Nigeria, the state has met these demonstrations with an unpredictable mix of violence and apathy (much like it responded to the #EndSARS protests against police violence last year). In September 2017, the Nigerian military staged an exercise called Operation Python Dance II. Publicly, this was an intervention against kidnapping, which is a major problem in the eastern states. To people in the east, it also seemed like an attempt to suppress Biafran agitation. Under the aegis of the exercise, soldiers and the police harassed activists and those suspected of sympathizing with the cause. That same year, the Nigerian government deemed IPOB a terrorist organization. In 2020, IPOB established a vigilante group called the Eastern Security Network, which appears to some observers more like an “armed wing.” Military action against it has been underway since January 2021.

Most Biafran activism takes place on the internet, not in the streets. The movement’s most prominent activists are savvy users of digital radio, who broadcast from exile in places like Houston and Tel Aviv, rather than Nigerian cities like Onitsha and Aba where their domestic support is found. The most famous of them is IPOB’s founder Nnamdi Kanu, a DJ-turned agitator who ran an online station called Radio Biafra from his flat in south London. Biafran activism is indelibly tied to social media. It flourishes on diasporic Facebook pages and WhatsApp groups, where messages in Spanish or German outnumber those in English or Igbo (although recently Kanu himself was banned from Facebook for hate speech). This reveals something important about the movement: it flourishes in exile. This is partly because Biafran activists can operate more openly in Europe and North America, where they fly under the radar, than they can in Nigeria. But the movement’s internationalism also reflects its character. Since the end of the war, the Biafran idea has appealed most to Igbos outside Nigeria. Those who made their lives elsewhere, and never had to come to terms with life in postwar Nigeria, are the ones who cherish the Biafran dream the most.

Neo-Biafran activism today looks different from the nationalist movement that flickered in and out of life in the late 1960s. It comes at a different political moment, and it speaks to a different group of people. It is a young movement, and few of its members have direct memories of the war. Its most prominent leaders are under fifty, and its rank and file—the people who show up at the protests—are even younger. In Nigeria itself, few who lived through the war express a desire for Biafra to secede again. The memory of wartime hunger and postwar humiliation kept former Biafrans from feeling much nostalgia for Biafra’s brief, embattled independence. Their children, however, feel differently. They have grown up hearing stories about the war from their parents or grandparents, and their political consciousness has been shaped by them. For Igbos born after 1970, Biafra remains an unfulfilled, idealized dream. Unencumbered by actual memories of the war, young people can speculate about what Biafra might have been, and what it might be in the future.

What future do young Biafran activists want? Some of them are wedded to the idea of a territorial nation-state, like the one that briefly existed in the 1960s. For others, the goal is something more abstruse: a diasporic state, or a perpetual government in exile, or a nation-state without a territory. These are political forms for which we do not yet have names. In centers of the Igbo diaspora like Guangzhou and Atlanta, activists lobby for “recognition” from foreign governments, although it is not clear what exactly they want recognized. They print passports and currency, in the hopes of making their claims more tangible and real. They cultivate connections with other secessionist movements, finding a place for themselves in a parallel universe where sovereign nation-states blur into visions, dreams, and thought experiments. Some hope that Biafra will be an African Israel—a homeland for a far-flung diaspora. For others the model is more like Dubai—a freewheeling global commercial hub, or a political form built on top of the commercial networks that Igbo businesspeople have already made.

Many hope (or fear) that this movement will continue to grow, but it is not clear what it is growing into. What is clear is that Biafra has definitively come back into Nigerian politics, and it will probably remain there. Biafra has become the lens through which many Igbos—both those in diaspora and those who live in Nigeria—understand their political predicament. It is a proxy for many forms of discontent. These include unemployment, alienation, underdevelopment, crime, and terrorism—a problem that Nigerians have had more than their fair share of in the last decade. Biafra can mean many things, and with every passing year, it is more detached from the historical reality of the short-lived Republic of Biafra. Neo-Biafran activists are trying to imagine new ways of being in the world as a political community. Time will tell what they come up with.

Samuel Fury Childs Daly is an Assistant Professor of African and African American Studies at Duke University. He is a historian of Africa after independence, and the author of A History of the Republic of Biafra: Law, Crime, and the Nigerian Civil War (Cambridge University Press, 2020). He is currently writing a global history of military desertion.