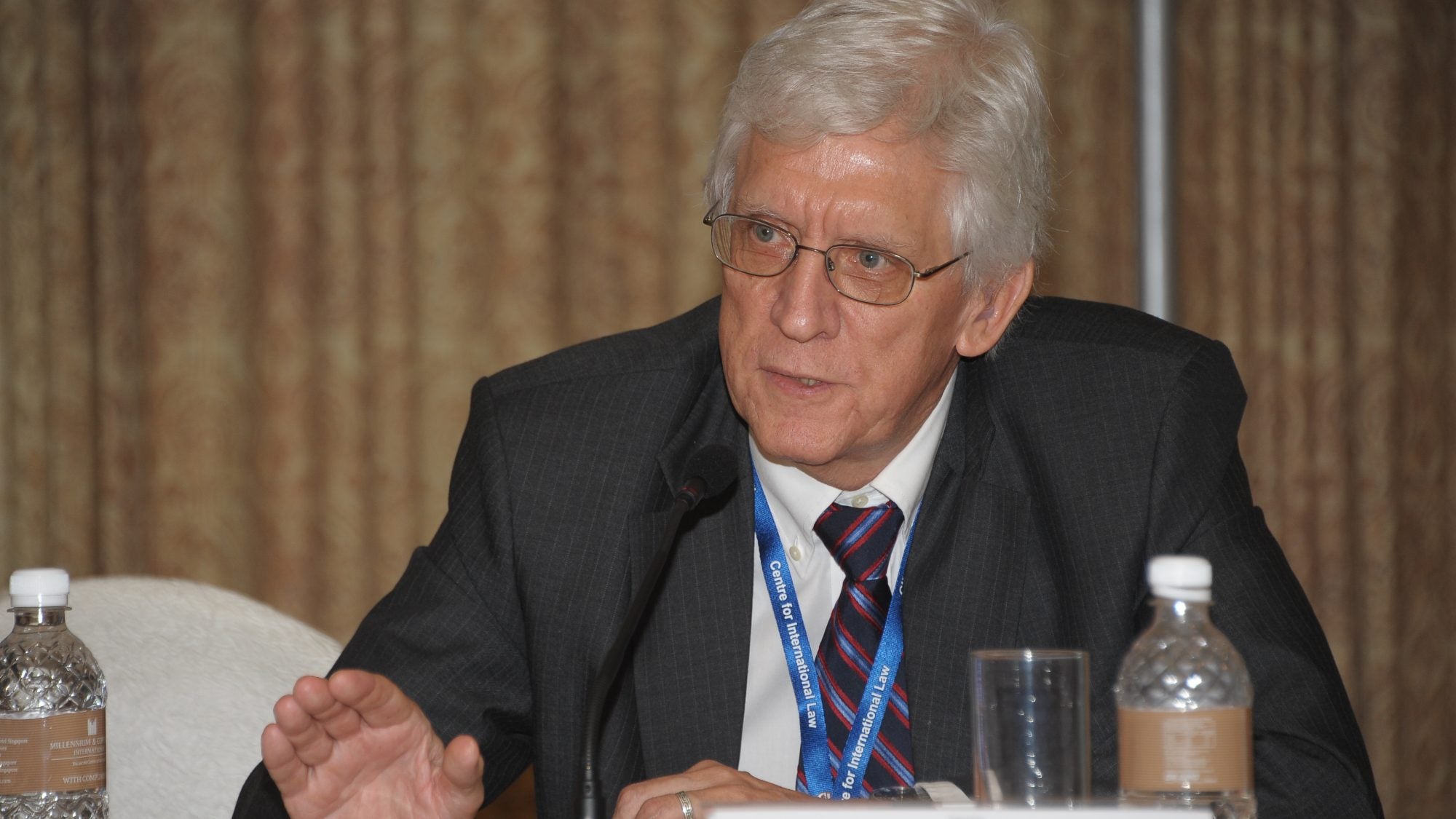 Title: Professor Robert Beckman on the Role of UNCLOS in Maritime Disputes

The United Nations Convention on the Law of the Sea (UNCLOS) became effective from November 1994 and has since been one of the most instrumental governing frameworks in international waters. On March 31, Professor Robert Beckman sat down with GJIA to discuss the importance of UNCLOS, especially in the context of maritime disputes like those in the South China Sea.

GJIA: Could you briefly outline the United Nations Convention on the Law of the Sea (UNCLOS), and explain why it is significant in the handling of maritime disputes, especially in the context of disputes in the South China Sea?

RB: UNCLOS is a universally accepted convention adopted in 1982, which sets out rights and obligations of states in the ocean space. I should say at the outset that what UNCLOS does not address is the issue of who owns particular land territory. UNCLOS assumes that we know who owns the land, and then it establishes rights and obligations of states in the adjacent waters.

One of the most intractable issues in the South China Sea is which state has sovereignty over the disputed islands. Some or all of the Spratly Islands are claimed by China, Vietnam, Malaysia, the Philippines, Brunei, and Taiwan. The Paracel Islands are claimed by China and Vietnam. Territorial sovereignty disputes are governed by rules of customary international law on the acquisition and loss of territory, not by UNCLOS.

A fundamental dispute in the South China Sea is the legitimacy of the maritime claims made by states from disputed features. This issue is governed by UNCLOS. It has been the position of the ASEAN (Association of Southeast Asian Nations) countries that each individual island in the Spratly Islands—assuming it is an island and not a low-tide elevation—is only entitled to a twelve-mile territorial sea. China’s position on this is very ambiguous. Although it is a party to UNCLOS, the legal basis of Chinese claims is still unclear to most observers. It seems to be taking the position that they can claim a 200-mile Exclusive Economic Zone (EEZ) from the islands. China issued its infamous nine-dash line map in 2009, with a statement that seemed to suggest that it not only can claim a 200-mile EEZ from the islands, but also that it has “historic rights” to the resources in and under the waters within the nine-dash line. After the Award of the Arbitral Tribunal in the South China Sea case in 2016, China seemed to shift its position slightly, by arguing that the four island groups in the South China Sea were each entitled to maritime zones, including a 200-mile EEZ from straight baselines connecting the islands in the group. In my opinion, this argument is also inconsistent with UNCLOS.

This is the quandary that we are in. Sometimes states are not sure exactly what the basis of Chinese claim is, but they are consistent in arguing the Chinese claim does not align with UNCLOS.

You mentioned that UNCLOS does not address issues of sovereignty. Would you say that that is the greatest limitation of UNCLOS?

UNCLOS was never intended to resolve issues of sovereignty, so I would not agree that it is a limitation of UNCLOS. The only way to deal with sovereignty issues is to either set aside the dispute and cooperate, or as in the case with Singapore and Malaysia over Pedra Branca and Middle Rocks, agree to go to a tribunal. Indonesia and Malaysia also went to a tribunal with respect to some offshore islands. However, the disputes in the South China Sea are so politically sensitive that the states concerned will not be able to agree to let international judges decide whether their sovereignty claim is legitimate.

The problem is similar to the East China Sea disputes between Japan and Korea, between China and Japan, and between Japan and Russia. All of these sovereignty disputes are holdovers from World War Two because the peace treaties ending the war did not resolve who has sovereignty over many of the offshore islands that had been occupied by Japan.

You mentioned that China claims historical rights and jurisdiction over the islands in the South China Sea in a manner that is inconsistent with UNCLOS. What challenges does this pose to UNCLOS, and how should the international community address this?

One of the distinctive features of UNCLOS is that it has a compulsory binding dispute settlement mechanism, so if any dispute arises between two states party to the convention on its interpretation or application, either party has the right to unilaterally take the other one to dispute settlement.

The assumption is, of course, that if a court or tribunal makes a decision as to whether one party is correctly or incorrectly interpreting the provisions in UNCLOS, the losing party will comply in good faith because it has agreed to the system in advance. The difficulty is that China refused to participate in that case and has refused to comply with the award of the arbitral tribunal. China’s policy was one of non-appearance, non-recognition, and non-compliance with the decision. In essence, we have an issue where one of the parties to an UNCLOS tribunal did not in good faith comply with what it had agreed to when it ratified the Convention.

In the past two-to-three years, there has been a greater interest among states outside of Southeast Asia in disputes in the South China Sea and in China’s position on the award of the arbitral tribunal. Some states are concerned that if China ignores the award of a tribunal on how UNCLOS applies in the South China Sea, other states might act similarly in other parts of the world, and thus jeopardize the integrity of the rules-based legal order established in UNCLOS. For example, in recent months, the United States, Australia, Japan, France, Germany, and the United Kingdom have all made official statements expressing opposition to China’s position.

In light of the effects of climate change on melting ice, the Arctic Ocean is becoming increasingly accessible and open to great power politics over new economic opportunities. Do you foresee the Arctic becoming another South China Sea?

Not at all. The Northern Sea Route from East Asia to Europe is mostly under the sovereignty of the Russian Federation, and there are no islands that would give rise to any territorial disputes. Melting ice may open up shipping routes through the Arctic, but there are no disputes over maritime claims similar to those in the South China Sea. The Russian Federation would like to open up passage through the Northern Sea Route as it will enable it to send its mineral and hydrocarbon resources to Western Europe on a shorter route. Tensions could arise if states increase their naval presence in the Arctic, but in my view the Arctic is not comparable to the South China Sea.

The United States is taking a great interest in UNCLOS as it applies to Southeast Asia and East Asia. One of the activities that increased during the Trump administration—and will probably continue under the Biden administration—is what the United States refers to as freedom of navigation operations (FONOPs) in the South China Sea, whereby the US Navy conducts operational challenges to maritime claims that they believe are inconsistent with UNCLOS. The United States also conducts FONOPs to challenge what it believes are excessive maritime claims of other states, but its FONOPs challenging the claims of China receive the most publicity. Unfortunately, the issues are rather complex, and as a result, the press reports about FONOPs are often either exaggerated or incorrect.

It would be in the best interest of the United States to ratify UNCLOS. It is my understanding that the US Navy, the Coast Guard, US mining and oil companies, and the leading environmental non-governmental organizations would all believe that the United States should ratify UNCLOS. The difficulty is that there is a small right-wing group of senators that are able to prevent the requisite number of votes to get it through the Senate. In my opinion, this is most unfortunate.

What do you think is the greatest challenge to the maritime order?

If we look at order in a security sense, that would be the stability of UNCLOS. If you look at the maritime order in a broader sense, the fundamental challenges we now face are the impact of climate change and the increasing degradation of the ocean environment, and whether the legal regime governing the oceans can be developed to address these issues. Those are some of the hottest issues that are taking place now. It is not a security issue, but rather more of an existential issue.

Professor Robert Beckman is an Adjunct Senior Fellow in the Maritime Security Programme at the Institute for Defence and Strategic Studies of Nanyang Technological University’s S. Rajaratnam School of International Studies. He is the founding Director of the Centre for International Law, a university-level research center at the National University of Singapore. He served as its Director from 2009 to 2016, and he is currently the Head of its Ocean Law and Policy Programme. Professor Beckman is also a Director of the Rhodes Academy of International Law and has lectured at the Rhodes Academy since 2009. He serves as a member of the Executive Committee of the Singapore branch of the Council on Security and Cooperation in the Asia-Pacific. Professor Beckman holds a J.D. from the University of Wisconsin-Madison and a LL.M. from Harvard University.