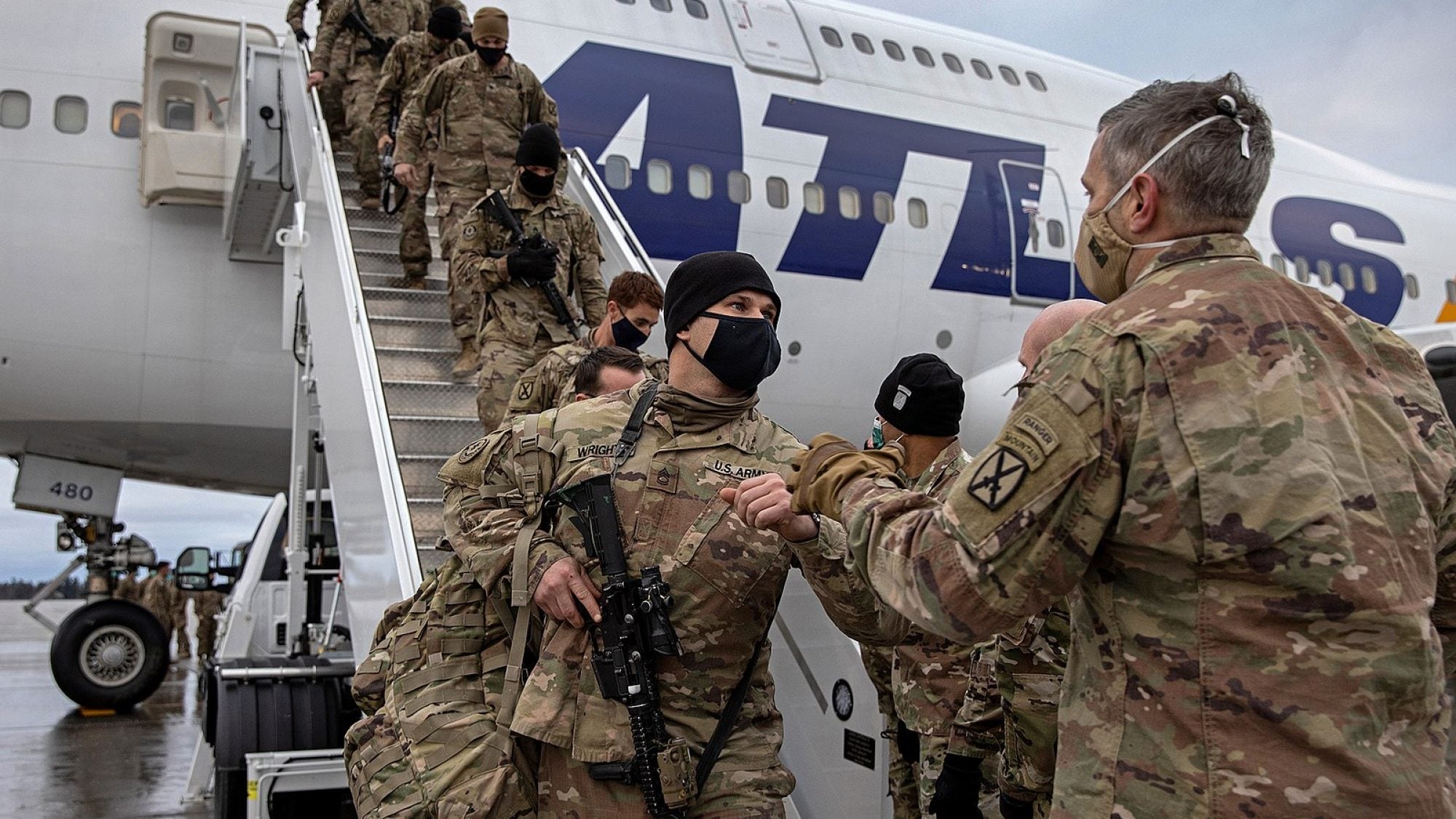 Title: Danielle Pletka on Biden’s Decision to Withdraw from Afghanistan

Danielle Pletka is a senior fellow and former vice president for foreign and defense policy at the American Enterprise Institute (AEI).  On April 27, 2021, she sat down with GJIA to assess President Biden’s announcement of an unconditional withdrawal of US troops from Afghanistan and its implications on national security.

GJIA: On April 14, 2021, Biden announced his plans to withdraw all remaining troops from Afghanistan by September 11, 2021. One of the notable features of the reaction in the United States to the announcement is a fair amount of bilateral confusion. The right and left are hard-pressed to explain the upside of a policy shift that presumably has the Taliban – and jihadists everywhere – feeling fortunate. Can you highlight the Biden administration’s rationale or pinpoint any positive foreign policy consequence of this decision, which has partial roots in the Trump era?

DP: Of all of the things where one would hope not to see continuity is with President Trump’s mindless isolationism — his desire to pull troops out of places where, frankly, such action would be damaging to us and derail the efforts we have made in the past, and an insult to the troops that have given their lives. Overall, it is a disastrous decision. So, what is the rationale? To my mind, this is mindless populism. It is bumper sticker foreign policy that responds to the notion of “forever war,” which in of itself is such an empty concept. It is truly disappointing.

GJIA: It is widely agreed that the Taliban will likely retake Kabul, overthrow President Ghani, establish an Islamic Emirate – which all implies brutal repression of basic human rights – and recreate a safe haven for al-Qaeda. Do you believe the administration doubts this prognosis, one which raises the possibility of someday returning to Afghanistan in a far more costly and heavy-handed manner? Or, do you think Washington is saying that whether or not the Taliban take over, al-Qaeda’s reach is dispersed so widely that Afghanistan is no longer a focal point for planning major terror events?

DP: First of all, for an administration that professes to be about human rights and democracy, this is possibly the most anti-human freedom and anti-democratic decision they have made so far, although it is a contest to see if their capitulation to Iran or capitulation to the Taliban is worse. I do not think there is any doubt about the Taliban’s long-term prospects. I do not think there is any doubt that the Taliban has remained in close coordination with al-Qaeda. I do not think there is any doubt that what we are looking at is a return to status quo ante. And, what I mean by “ante” is the days before September 11, 2001. I remember those days clearly because I worked on Afghanistan in the US government. What you could see from the end of the Cold War was a series of ill-considered decisions, where small investments could have paid very large dividends. In the United States, every Commander-in-Chief’s aim must be to not see Afghanistan as a source of global destabilization or as a source of planning attacks against the United States and our allies. And, of course, that is exactly what is going to happen. I think there is a further point here. The Biden administration has said that in no circumstances are we going back to Afghanistan. Biden was Vice President when Obama made the disastrous decision to pull all of our troops out of Iraq in 2011. He must not remember what happened ten years ago. But the rest of us remember what happened, which was the rise of al-Qaeda in Iraq. We know al-Qaeda in Iraq better by its new name, ISIS. That was a direct consequence of withdrawal. Similarly, the decision of the Biden administration will result in human rights degradation, women’s rights degradation, the degradation of religious freedom, and a massive step-up in risk to our national security.

GJIA: The symbolism of Biden’s choice to withdraw all troops by the twentieth anniversary of September 11 may have profound implications. Do you think that President Biden sees this fateful date only from the American perspective of ending a so-called “forever war,” and what are the costs of downplaying the fact that jihadists everywhere may see this as their ultimate 9/11 victory and validation of their cause?

DP: How could they not have seen that? It seems to me to be a communications misstep of such epic and bizarre scale. I do not know anybody, no matter where they stand on withdrawal, no matter what side of the aisle they come from, who does not think that was incredibly stupid. Of course, they are going to celebrate. For them, this is a long war and twenty years later, they have won. The United States is out of Afghanistan. It is incredible. When you talk about Trump saying he had an “America First” administration, all I can think to myself is, I guess this is how these guys see the world, too. They never give a moment’s thought to see how this may be perceived by the enemy.

GJIA: To some extent, the packaging of the Afghan pull-out paints it as cutting our losses. There is well-justified frustration with government corruption, failures in the training of security forces, and slow progress with institution-building and civil society. But is the twenty-year experience, in your opinion, fairly characterized as a total loss – both for the Afghan people and for the United States?

DP: You have to ask the question, “Why did we go into Afghanistan?” We did not go into Afghanistan in order to better the lives of the Afghan people, although, in my view, that should be one of the goals of our foreign policy. We went in to root out an enemy who murdered 3,000 Americans, the most devastating attack in American history. That was why. Has there been another attack like that? No. Is Al-Qaeda established within the borders of Afghanistan and operating to plan another attack against the United States? Not today. If you want to cast the aims of the war, those were the aims. Osama Bin Laden is dead. The reality is that Al-Qaeda lives on. Not just Al-Qaeda, but all its subsidiaries, and that is part of our failure. Are the Ghani government and issues with the Afghan security forces part of our problem? Well, yes. They are hard to train. On the other hand, I ask myself why it is that we need to take 2,500 – 3,000 troops out of Afghanistan when we have more than 3,000 troops each in Spain, Italy, Germany, Japan, South Korea, Bahrain etc. So why Afghanistan? What is the problem? The last casualty we had there was a motor vehicle accident. Yes, sure, it would be nice if Afghanistan had a Jeffersonian government and an army up to the caliber of the United States or France. It does not. This is a developing country, and it takes investment, work, and security for democracy to happen. We have just taken away the number one prerequisite, security.

GJIA: Finally, what do you think the Afghanistan decision might mean for a Biden “grand strategy?” The announcement implied that the War on Terror needs to take a back seat to more fundamental threats to US interests from China and Russia. In your view, is this really a valid case of “either/or?” Given the current level of commitments and expenditures, is it not possible or wise to keep a foothold in Afghanistan while also confronting these conventional geopolitical challenges?

DP: First, I am surprised that they are so quick to pronounce the United States unable to chew gum and walk. Keeping 2,500 troops in Afghanistan is not really a big distraction from our fight against China. Second, it is costing us more to withdraw from Afghanistan than it is to stay. The notion that the United States can beat the jihadist threat with standoff weaponry is also well proven as false. Finally, again, of course there is a challenge from China. What do the Chinese think when we tuck tail and run away from the Taliban and al-Qaeda in Afghanistan? I know what I think. This administration does not have the stomach for this fight. This administration does not have a coherent foreign policy. This administration does nothing but react to what is on the back of cars as opposed to thinking of the long-term implications. And that is no way to run a country.

Danielle Pletka is a senior fellow and former vice president for foreign and defense policy at the American Enterprise Institute (AEI) and is an adjunct instructor at Georgetown University’s Center for Jewish Civilization (CJC). Previously, she was a senior staff member on the Committee on Foreign Relations for Senator Jesse Helms, specializing in Middle East and South Asia – with specific responsibility for Afghanistan, India, and Pakistan.