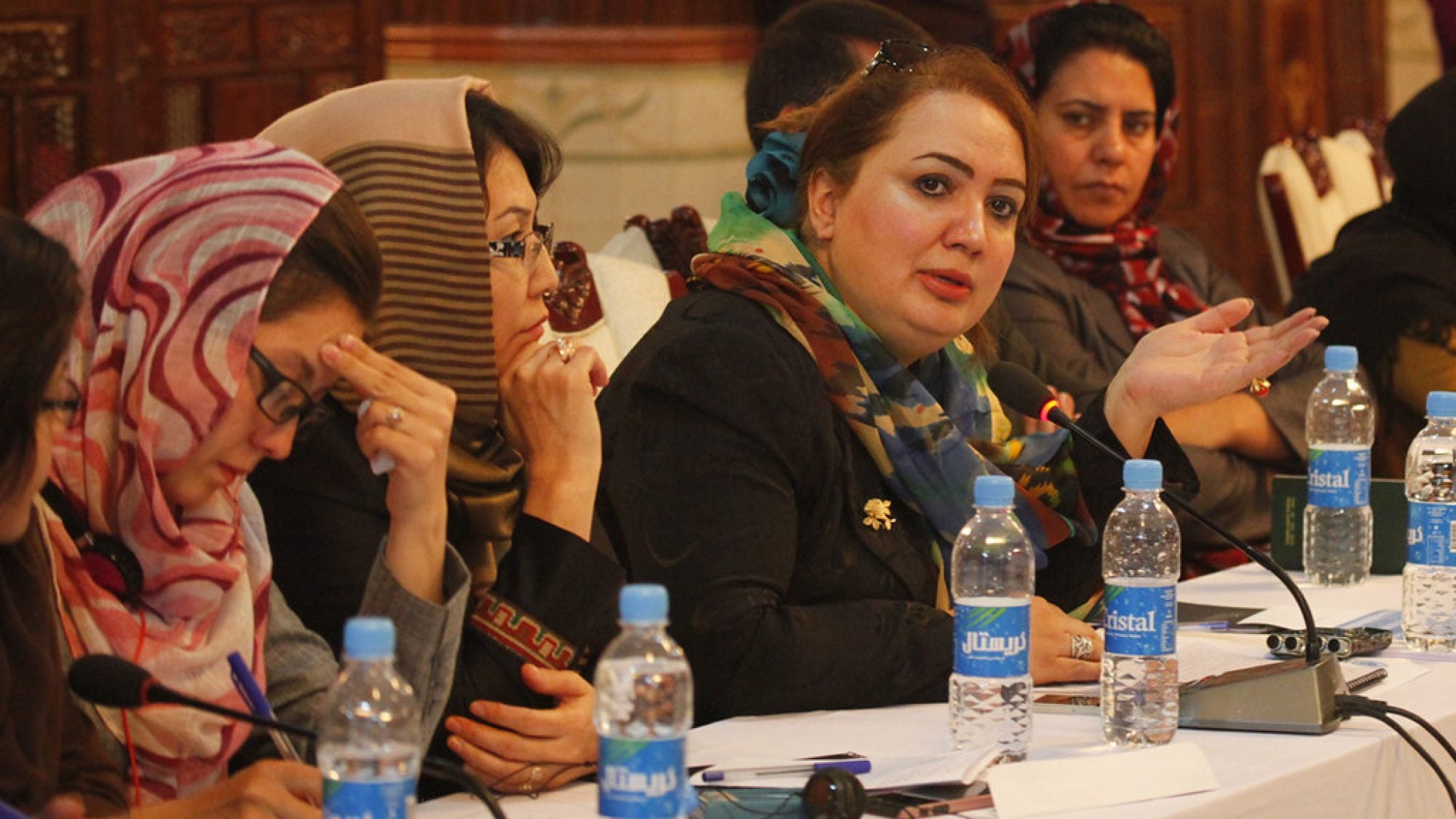 Title: Bringing Peace to Whom? What is at Stake in the Intra-Afghan Peace Talks

In Afghanistan, stalling peace talks, the growing leverage of the Taliban, and the dwindling support of the international coalition put advancements made in women’s rights in the past two decades at stake. To maintain the progress made thus far, Afghan women must be officially included in the peace process. External support of local women’s efforts from benefactors such as the United States is crucial. The peace negotiations must go beyond the inclusion of women and girls by seizing the opportunity to renegotiate structural inequalities and harmful gender norms to pave the way for greater gender equality in Afghanistan.

Although the war between the Afghan government and the Afghan Taliban has been at a stalemate for years, the intra-Afghan peace talks in Doha, Qatar mark a breakthrough as the two feuding parties have gathered for the first time to negotiate a peaceful settlement. The negotiations began after a delay of six months on September 12, 2020. The talks were a direct consequence of the U.S. – Taliban agreement entitled “Bringing Peace to Afghanistan” that was signed on February 29, 2020. This agreement required the Taliban to engage with the Afghan government directly; subject to the withdrawal of coalition forces that began on May 1, 2021 and will be finalized before September 11, 2021. So far, little progress has been made in the peace process that has stalled following the U.S. troop withdrawal and escalating violence as the Taliban increasingly bring provinces under their control.

For no one are the stakes accompanying the stalling peace negotiations, the growing leverage of the Taliban, and the dwindling support of the international coalition higher than for Afghan women. The Asia Foundation’s 2020 Afghanistan Flash Survey found that 50.1 percent of respondents, particularly women and younger Afghans, do not feel represented in the talks. While the Afghan government’s delegation, that includes 4 women out of 21 delegates, aims to preserve the gains in human rights made over the last two decades, it remains unclear whether the Taliban are willing to make concessions on this matter. Women’s rights under the Afghan government have advanced modestly: Millions of girls who would have been denied education under the Taliban now receive schooling. Despite these gains, two-thirds of Afghan girls still do not attend school, a number much higher in Taliban-controlled areas. Women started achieving positions of economic, social, and political power, for instance as heads of the 54,000 women-run enterprises in Afghanistan and through legislative quotas at the provincial and national level that reserve 27 percent of the seats in the lower house (Wolesi Jirga) for women. Afghan women activists from civil society and key governmental figures argue that these achievements cannot be undone, and that pressure must be exerted on the Taliban to accept this transformation in Afghan society. The Asia Foundation’s 2020 Afghanistan Flash Survey found that 85.6 percent of respondents “would be very unwilling to accept a peace agreement that results in women and girls no longer being able to attend school.”

The Taliban dismiss these demands on the grounds that the advancement of women’s rights is a Western idea imposed from the outside. In the past, they have placed strict limits on women by enforcing veiling, regulating women’s education, and preventing their participation in society and politics. The Taliban have stated that they want rights to be guaranteed in conformity with sharia. This statement has worried human rights activists that the Taliban will reimpose past restrictions on rights and freedoms wherever they maintain power.

It is therefore crucial to officially include women in the intra-Afghan peace talks and the subsequent peace process. They have the right to be included since they constitute half of the population. Women and men experience armed conflict and violence differently, and women’s stories of how the war has affected them need to be part of justice and reconciliation to achieve a positive, sustainable peace. Since women are not a homogenous group with homogenous interests and experiences, it cannot be expected that solely inviting women to the table will increase the representation of all women. Instead, a diverse group of representatives is needed to represent women’s multifaceted interests. The intra-Afghan peace talks can only succeed if they are a societal process rather than a military and political one only, which is why distinct voices from society need to be included, especially ones that have been invested in peacebuilding and social cohesion rather than actively fighting in the war. contrast, only inviting insurgents to negotiate will send a signal that fighting will be rewarded with a greater say in how the post-war society will be shaped, and limits peacemaking to a military and political process, rather than making it about all of society. Peace processes that involve female peacemakers are 54 percent more likely to produce durable peace. This is because peace agreements signed by female delegates broaden societal support and tend to include more provisions for political reforms, as well as higher implementation rates of these provisions.

Finally, including women in the peace talks is key on the political level to help preserve the gains made in human rights, especially women’s rights, in the past two decades. Local women’s efforts to safeguard their rights must be supported by international sponsors, donors and coalition troops. Women’s organizations have set up parallel events in Doha to make their voices heard. After the first round of U.S.-Taliban peace talks in February disregarded women’s rights and participation, women’s organizations protested until the last event included 10 women. Several opening speeches in the intra-Afghan peace talks included references to women’s rights, making it clear that these issues had to be part of the negotiations.

Both the Afghan and the international media can help safeguard the progress made in women’s rights by reporting on it rather than focusing only on conflict and insurgents. These efforts can be supported by providing leverage to the Afghan government by making external benefactors’ continuous backing and financial support conditional on upholding human rights advancements and by tying imminent-future military abstinence from Afghanistan to a successful agreement securing human rights. This will help prevent the Taliban from waiting out the talks until the troop withdrawal is completed in September to then quit negotiating, increase territorial gains, and regain control as a result. A sustainable agreement must contain an inclusive definition of a ceasefire including sexual and gender-based violence (SGBV) that is at least partly monitored by women. Even after a ceasefire is reached, all forms of SGBV are otherwise likely to escalate due to gendered roles and unequal power relations in society that are exacerbated by violent conflict and constitute gendered vulnerabilities. For instance, shame attached to rape in patriarchal societies that equate women’s purity to family honor may lead to stigmatization and exclusion, thus increasing survivors’ vulnerability to poverty, abusive relationships, and SGBV, thereby triggering further cycles of vigilantism and violence.

The goal of these talks must not only be to preserve what rights women have in Afghanistan, but to work towards gender equality. Striving to achieve gender equality means more than simply acknowledging that women and girls are being neglected. It requires the transformation of harmful gender roles, norms and identities that are at the core of Afghanistan’s unequal power relations and gender-based violence. This means that external benefactors can participate in this discourse and build leverage for Afghan women by engaging, consulting, and assisting them. In other words, rather than imposing Western social values on Afghan society, as the Taliban claim, the peace talks can use the heart of Afghanistan’s culture, such as women’s central role in the private sphere, to renegotiate harmful gender norms and transform structural inequalities in accordance with local customs. These efforts can be supported by allocating human and financial resources to components that will ensure gender equality including gender trainings of all participants, the appointment of gender advisors, gender-sensitive mediation teams, a gender analysis that identifies and targets gendered needs; and by tying the continued payment of foreign aid to a post-peace talks Taliban-inclusive government to the advancement of Afghan women.

Many Afghans have decided what justice means to them and are willing to forgive the Taliban if this fosters an inclusive, positive peace with respect for human rights. However, there is still the need for justice and accountability to end trauma, restore trust in the government, and move society forward towards a peaceful and inclusive future. Studies show that it is particularly important to pursue non-traditional approaches that open a space where harm can be addressed openly, especially for women who are more restrained in their movement due to their dependence on a male family member or husband to approve them leaving the house. One proposal is gender-sensitive problem-solving workshops that offer peace and conflict awareness education and training, as well as sports, music, or art workshops to process trauma and provide opportunities to share personal experiences.

The future of the peace deal is distant and ambiguous as, recently, the strength of the Taliban has been growing as support for the international coalition dwindles. A lasting solution to the conflict is only possible if Afghan women play an active part in the peace process and international sponsors, donors, and coalition troops utilize their leverage to secure human rights advancements, especially regarding gender equality. Most importantly, the negotiations present a unique window of opportunity to renegotiate structural inequalities and harmful gender norms in a society in which women’s stakes are particularly high if the talks fail to yield any meaningful results.

Louise Liebing is a M.A. candidate in International Affairs with a focus on conflict and conflict resolution at the George Washington University’s Elliott School. Her research focuses on intersections between gender and the military, especially gender in NATO missions and UN peacekeeping operations in the Middle East and North Africa. She can be reached at lliebing@gwu.edu.