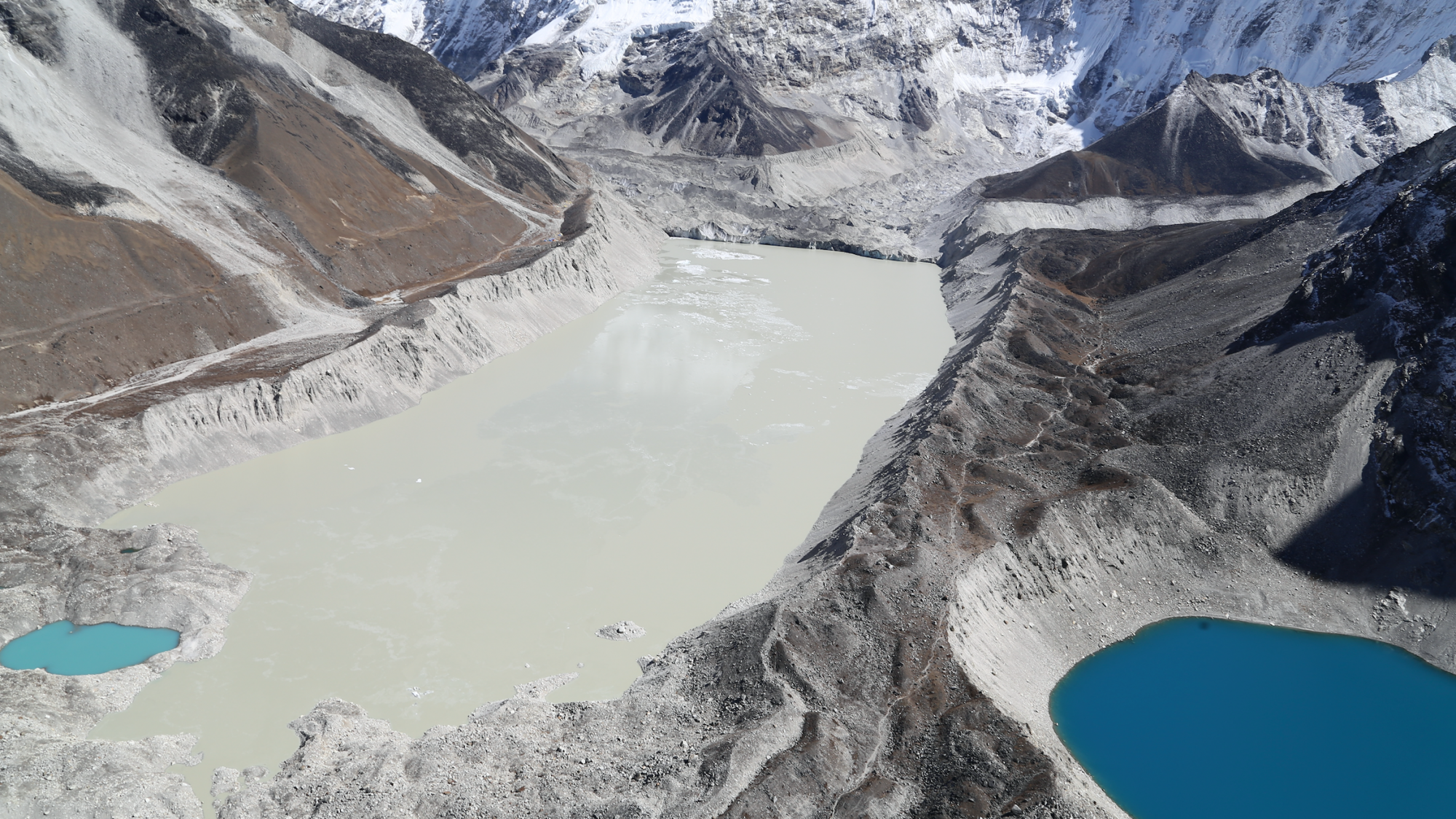 Many disasters occur when natural hazard events impact people or infrastructure. Hazards can be exacerbated by climate change, which can amplify the physical processes of hazards, the magnitude of their effect, or location of impact where vulnerabilities may be large and adaptations may be inadequate. Consequently, mountain disasters also are shifting in geographic pattern and intensity as the climate warms. Part I of this article examines how globally interconnected climate change affects mountain hazards and how hazard early warning systems could save lives. Part II considers public safety, environmental conservation, and socio-economic flashpoints in mountainous regions, such as over water and energy resources, and possible coordinated transboundary management of these priorities and conflicts.

Excess water in mountain areas leads to floods, debris flows, and landslides, while deficiencies of water may lead to drought and wildfire. Climate change, which impacts the amount of water in an environment, therefore directly links to many hazard processes.  It drives more extreme precipitation and floods, mass movements of debris, and erratic behavior of glaciers, including faster melting, glacier surges, ice avalanches, and glacial lake development. Climate influenced landslides can result in damming that floods upstream areas while downstream areas can get flooded when these natural landslide dams break.

Natural hazard-induced disasters are extremely costly and are increasing in number and size of impact as development in mountain regions continues and climate change progresses. Extreme weather in the United States alone caused a surge in multi-billion-dollar disasters from 1980 to 2020, costing cumulatively more than $1.9 trillion and thousands of lives. With the climate continuing to change, natural hazard impacts on people and the economy are projected to increase. Mitigation of some of these impacts first requires hazard forecasting, including a better understanding of how climate is changing, and subsequently disaster risk reduction, or the technical means to warn people of oncoming hazard events before they hit.

While some of the effects of climate change are local, many are connected through inter-regional linkages of climate mechanisms via mass and energy flows within and between the oceans and atmosphere, known as teleconnections. Changes in ocean currents and air flow are already globally affecting hydrology and natural hazards.

Recent years have seen powerful fluxes of tropical air moving into the Arctic, Arctic air moving south, and weeks-long stagnation of high-pressure systems over particular areas, such that extreme weather of a magnitude rarely seen before has become commonplace.  Similar stagnating weather patterns have been reported all over the world in a phenomenon known as“blocking,” where certain regions are drenched by months of back-to-back storms, while adjacent regions are parched and burned under sustained storm-deflecting stationary high pressure.

A controversial hypothesis that attempts to explain blocking maintains that the fast-warming Arctic is causing storm-steering jet streams to meander more and occasionally lock high- and low-pressure systems in place. The controversy concerns the degree to which theory matches the historic records of blocking and jet stream behavior. Though alternative models have differing details, the Intergovernmental Panel on Climate Change (IPCC) has established that many kinds of extreme weather have increased dramatically around the world in recent decades. This activity is connected to changing jet stream behavior and is driven by anthropogenic greenhouse gases.

Blocking and other anomalies in global atmospheric circulation combined with global warming has had wide-ranging effects. Some examples:

Mountains are especially impacted by climate change due to their steep slopes and the common presence of glaciers and forests. Virtually every mountain range in the world is impacted by climate change. When compounded by global warming and expected increases in extreme ENSO fluctuations in coming decades, blocking and other anomalies in atmospheric circulation will generate increasingly severe extreme weather and disasters worldwide, though different models predict different levels of intensity and impact.

It is important to note, not all mountain hazards have clear climate connections. For instance, most earthquakes, have no climate linkages. Even when a disaster is climate- or weather-related, the causal relationships to climate change sometimes are obscure. In one example, a debris flow in Freetown, Sierra Leone in 2017 that left over a thousand people dead or missing was induced by protracted rainfall and exacerbated by deforestation and poorly-placed residential areas. Although this landslide was weather-related, the triggering rainfall was high, but not extraordinary.

However, for icy mountain hazards, climate change is a prime consideration. Some consequential changes wrought by shifting climate occur where ice and liquid water coexist, such as melting snowfields, glaciers, and thawing permafrost; the world’s major storm tracks converge; and topography is complex. The Himalaya, the Andes, and Alaska in particular combine these factors to excess.  Overall, warming oceans are driving an increased tempo of the hydrological cycle, impacting storms and natural hazards.  Risks in these regions are further exacerbated by rapid economic and population growth, competing cultural and economic priorities, and—in some Andean and Himalayan countries—disputed borders.

The interaction of climate change with these geographic factors results in shifting geographic patterns of mountain hazards, such as low-angle glacier detachments, where entire glaciers slip off their beds. However, climate influenced shifts of mountain hazards are globally nonuniform and it is unclear how a potential “wavier jet stream” and a changing ENSO will affect Asian monsoons and westerlies and their convergence over the Himalaya, or how changes in ENSO will affect the future Andean climate. These interactions are poorly understood, yet they are crucial for predictions of twenty-first century climate-related issues.

In glacierized areas of Alaska, the Himalaya, and the Andes, a warming climate and melting glaciers can form glacial lakes. Most develop, grow, then empty without consequence, but some drain catastrophically, producing Glacier Lake Outburst Floods (GLOFs). GLOF hazards are exceptional in Peru’s Andes. The 1941 GLOF from Lake Palcacocha killed thousands of people in Huaraz. The region has experienced many other comparable and larger GLOFs and other glacier disasters.

A recent, smaller GLOF occurred in the Cusco district of Santa Teresa, Peru in February 2020 when 400,000 cubic meters of rock and ice detached from Salkantay glacier, causing its lake to overflow. The resulting flood killed 5 and left 370 people homeless, damaged infrastructure and homes, killed animals, and destroyed crops. This disaster, which could have been worse according to an inspection report, reflects the risk from GLOFs in the Andes. Such hazards motivated Peru to become a leader in GLOF mitigation, but steps towards GLOF warnings lag. Hazard early warning has emerged as an urgent need in mountainous regions.

Examples from Chile, Peru, and Nepal illustrate a need for improved and expanded hazard early warning. As in other glacierized places, climate change in Peru causes variations in glacial lakes and forms new, potentially threatening lakes. Dealing with threats from such changes requires improved management, warnings, and response capacity. Despite widespread and heightened risks from GLOFs, it took seventy-one years to begin installing GLOF EWSs. Peru’s first GLOF EWS was established in Carhuaz and operated successfully for four years before being destroyed by local people, who errantly related the equipment to unseasonal drought. A newly installed EWS serving the city of Huaraz, Palcacocha, and two other glacial lakes finally became operational this year.

After nearly four decades without a GLOF, the Colonia River in southern Chile, a tributary of the Baker River in the Northern Patagonian Ice Fields, experienced six GLOFs from Lago Cachet II between 2008 and 2010. The basin has seen more GLOFs in the past decade, causing socio-economic damage and fatalities. Aside from an experimental camera-based EWS installed in 2010 at three glacial lakes in Chile, including Lago Cachet II, only a few hazardous Andean lakes have EWSs.

Despite GLOF risks, Chilean rivers were the planned sites of large hydropower plants. The projects, immediately controversial, were ultimately cancelled. One reason for their cancellation was that the dams’ environmental impact assessment did not adequately address the damage that future GLOFs could cause to the infrastructure and communities downstream.

In Nepal too, many severe GLOF hazards lack EWSs. Some of the authors of this article led a hydrology and bathymetry survey of Imja Lake, a serious hazard near Mount Everest. Our survey, funded by the UN Development Program, informed the installation of a GLOF EWS and engineering to reduce the lake’s instability. In response to scientific research on Nepal’s glacial lakes, including our own studies, Nepal is working toward more widespread hazard EWSs.

Mountain regions provide crucial water, energy, and mineral resources; define many international and cultural boundaries; challenge transboundary commerce; and host ecological refugia and nature preserves. Whereas their difficult terrain and climate have made mountains among the last places on Earth to be heavily settled, development is proceeding, as is the struggle to institute balance between development and conservation.

Hazards are shifting across the globe and changing in intensity and frequency as our planet’s climate system is modified. Climate change is especially affecting hazards where water is key and where ice can melt. Hazards are integrally tied to the resource value of mountain snow and glaciers, rainfall, and hydroelectric power. These challenges require greater effectiveness of hazard EWSs, more responsible permitting and oversight of land use, and more secure investments in infrastructure. In Part II of this article, we will describe some newly recognized kinds of severe mountain hazards, detection, and attribution of climate change influences on hazards, and adaptations to hazardous mountain environments, including useful roles of conservation in the context of hazard impact mitigation.

Please look forward to Part II in this series, which will be published on Wednesday, September 1.

Jeffrey Kargel (USA, jkargel@psi.edu) is a Senior Scientist at the Planetary Science Institute, where he studies the world’s glaciers.

Kavita Upadhyay (INDIA, kavita.dineshagnee@gmail.com) is an independent journalist and water resource specialist, and has written about environmental issues in the Himalaya for major news outlets such as The Hindu and The Indian Express; she is a graduate in Water Science, Policy, and Management from Oxford University.

Adriana Gabriela Mayo Ramos (PERU, adrianamayoramos@gmail.com) is an independent journalist, specializing in environmental and social-cultural issues; she has written for major news outlets, including La República.

Amanda Maxwell (USA, amaxwell@nrdc.org) has a background in history, Spanish, international politics, and economics; she is the Interim Managing Director of International Programs at the Natural Resources Defense Council, specializing in clean energy, wildlife, and wildlands throughout Latin America.

Stephan Harrison (UK, Stephan.Harrison@exeter.ac.uk) is a Professor of Climate and Environmental Change at the University of Exeter, where he undertakes landscape change detection, characterization, and attribution.

Dan H. Shugar (CANADA, daniel.shugar@ucalgary.ca) is an Associate Professor of Geoscience and the Director of the Environmental Science Program at the University of Calgary.

Umesh Haritashya (USA, uharitashya1@udayton.edu) is a Professor in the Department of Geology and Environmental Geosciences at the University of Dayton, specializing in remote sensing of mountain processes; he holds the Mann endowed chair in the natural sciences working on science and human rights and sustainability.