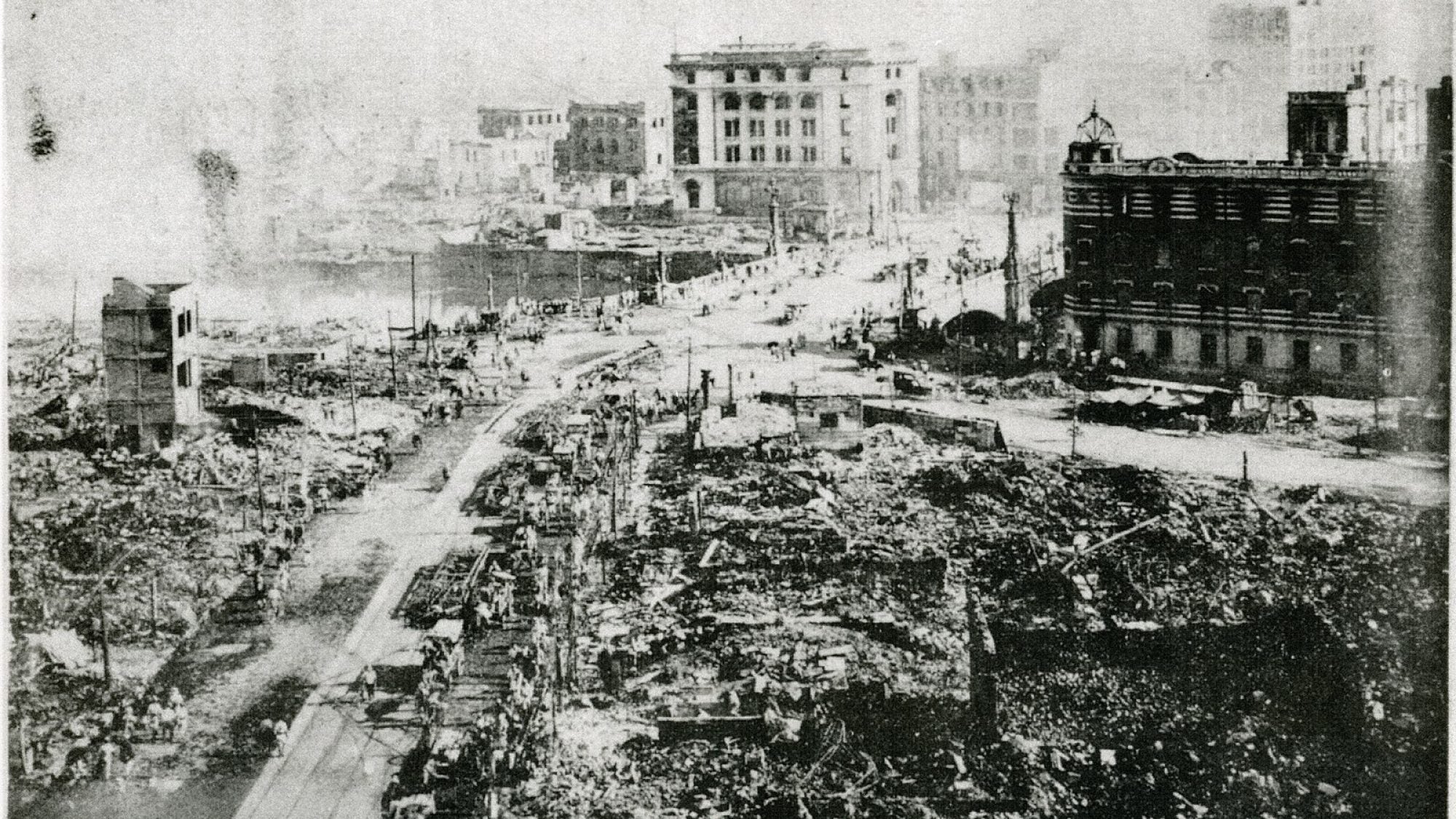 Current controversies surrounding the memory of a 1923 massacre of Koreans in and around Tokyo provide a starting point for examining the rise of historical denialism in Japan. The past two decades have witnessed the growing influence of small Japanese lobby groups who use techniques reminiscent of Holocaust denialism, in an effort to erase the memory of the inconvenient parts of Japan’s past. The country’s internal “history wars” are increasingly spilling over its national boundaries, creating challenges to scholarly integrity in other countries including the United States. International dialogue and collaboration are needed to respond to these challenges.

The Great Earthquake and the Massacre

In September 2023, Japan will commemorate the centenary of one of the twentieth century’s worst disasters: the Great Kanto Earthquake, which destroyed much of Tokyo and Yokohama, resulting in over one-hundred thousand deaths. In the panic that followed, rumours spread that immigrants from Japan’s then-colony of Korea were poisoning wells and planning violent attacks on Japanese citizens. Japanese vigilante groups, backed by the police and army, responded by killing those they believed to be Korean. A 2009 official report cites figures of anywhere from twenty-six hundred to sixty-six hundred Korean victims from the massacre, as well as several hundred Chinese victims.

Ever since the fiftieth anniversary of the massacre, a memorial event has been held for the victims, with messages of remembrance from public figures including the Governor of Tokyo. However, since 2017, the current right-wing Governor, Koike Yuriko, has repeatedly refused to send such a message. Further, recent memorial ceremonies have been accompanied by counter-protests staged by vocal right-wing “massacre denialist” groups, encouraging the proliferation of provocative anti-Korean hate speech. In the context of deepening tensions between Japan and Korea, Koike’s symbolic refusal to commemorate the massacre has raised concern amongst scholars and citizens’ groups as to how the 2023 commemoration of the Great Kanto Earthquake will deal with the memory of the massacre. There are fears that the contest between commemoration and the denial of memory may further inflame inter-ethnic and international tensions. Controversies surrounding the memory of the massacre are just part of wider intensifying contests over memory and history in Japan.

East Asia’s “history wars” are often depicted as driven by contemporary geopolitical rivalries between Japan and both China and South Korea. Friction between Japan and Korea focuses on the issues of wartime recruitment of Korean forced laborers and so-called “comfort women” (women recruited to work Japanese military brothels during the war), while tensions between Japan and China center on the large scale massacre which occurred in Nanjing in 1937-1938 and biological warfare experiments and human vivisection by the Japanese military’s Unit 731. A common view presents the United States as a third-party mediator between Japan and Korea, and suggests that the conflicts might readily be resolved through clearer communication between the two parties. These views, though, fail to grasp essential dimensions of the “history wars,” characterized by issues like the “un-remembering” of particular imperial acts of violence and the spread of dangerous rhetoric which serves to rewrite Japanese history. This rewriting is not simply a problem for relations between East Asian nations, but for politics and society within Japan itself and for Japan’s relationship with the wider world.

The Politics of Denial

After Japan’s WWII defeat in 1945, there was widespread public rejection of war within the country, with vocal criticism of wartime political and military leaders. By the late 1950s and the early 1960s, some nationalist intellectuals began to challenge this view, presenting Japan as the would-be liberator of Asia and a victim of Western imperialism. For decades, these views were confined to a relatively marginalised far right. Since the mid-1990s, however, public rhetoric around the war has shifted following the emergence of demands for Japanese apologies and compensation by victims of Japan’s former wartime actions–particularly former “comfort women.” One response to these demands was the rise of denialist lobby groups, who rejected evidence of the forced recruitment of “comfort women” and more generally sought to justify Japan’s wartime actions. Various conservative politicians including eventual Prime Minister Shinzo Abe were centrally involved in some of these groups, as were several academics and popular media figures.

By the end of the twentieth century, the denialist movement had proliferated into an interlocking web of small but vocal lobby groups. Today, these groups increasingly operate internationally as well as within Japan itself, and include organizations with pseudo-scholarly English titles such the “Society for the Dissemination of Historical Fact,” the “Historical Awareness Research Committee,” and the “International Research Institute of Controversial Histories.” Their overlapping membership includes full-time neonationalist activists and their grassroots supporters, businesspeople, politicians, members of various new religious movements, and academics. Though their funding sources are undefined, cooperation is known to come from business sponsors and some right-wing non-government foundations and think-tanks.

The groups vary slightly in their focus: a few concentrate exclusively on the issue of the “comfort women,” while others range more broadly in their denialism. These issues are embedded in a wider, all-embracing view of twentieth century Japanese history: one that presents Japan as the victim and attributes negative images of Japan’s pre-war and wartime past to international propaganda conspiracies.

These groups also share a distinctive method of historical writing similar to the methods of Holocaust denialism. They seize on historical documents that are often relatively obscure and cherry-pick them for information which supports their cause. These fragments of information are then strung together without contextualization into writing that overlooks source reliability, ignores contradictory evidence, and fundamentally misrepresents content. A classic example of this technique is the repeated citing of a U.S. 1944 prisoner of war interrogation report (Report No. 49), which is used as ammunition against the credibility of former “comfort women.” This report, which was compiled by U.S. soldiers, expresses demeaning attitudes toward the women they encountered. The denialist groups quote the report’s dismissal of the women as “camp-followers” and as “uneducated, childish, whimsical and selfish,” while concealing the clear factual statement in the document that Japanese military brothels recruited women by trickery and deception.

Additionally, over the past five or six years, the rapid expansion of overseas propaganda efforts by these groups has coincided uncomfortably with a similarly rapid growth of the Japanese government’s budget for “the strategic dissemination of information overseas” (senryakuteki taigai hasshin). One specific aim of this policy is to convey “Japan’s correct stance” on history (particularly denial of the forced recruitment of “comfort women”) to the wider world through the “cultivation of cohorts of people who are pro-Japanese and knowledgeable about Japan.” The precise use of the “overseas dissemination” budget is unclear, with some of it being channelled through private think tanks whose funding sources are not necessarily made public. This opacity makes it impossible to tell whether any of the denialist lobby groups benefit directly or indirectly from these flows of state funding. Other sorts of indirect connection, however, are evident. A substantial number of ruling party parliamentarians belong to lobby groups which disseminate revisionist views. Denialist lobby groups and Japanese diplomats have also worked side-by-side, for example, to denounce proposals to erect monuments to the former “comfort women” in various parts of the world, including the United States. The “history wars” have thus affected politics internationally.

Conflicts over history and memory have also spilled over into U.S. academia, as was illustrated in early 2021 by a series of articles published by Harvard Law School Professor J. Mark Ramseyer. These texts present “comfort women” as paid prostitutes who signed lucrative contracts with the Japanese military. The articles also buy into the questioning of the 1923 massacre, and perpetuate negative stereotypes of members of the Korean, Okinawan, and Buraku minorities in Japan. Critics have pointed out that the use of data in these articles follows characteristic patterns of cherry-picking, decontextualization, and misleading use of sources. When a substantial number of scholars called for the retraction of these articles from peer reviewed publications because of their research flaws, Ramseyer responded by making a video presentation to a conference, which was organized and sponsored by key members of various Japanese neo-nationalist historical lobby groups, including the International Research Institute of Controversial Histories. Rather than addressing specific questions raised about his research methods, Ramseyer accused his critics of using “Stalinist methods” to carry out “attempted assassination” of free academic debate.

There are many academic and local historians in Japan who have spent decades conscientiously researching these topics and who use their research to promote public understanding and dialogue between community groups. The denialist upsurge not only encourages prejudice against minority communities within Japan, but also makes the work of these Japanese advocates of memory and reconciliation harder. For academics in the United States and other parts of the world, this upsurge highlights the importance of being conscious of the forces shaping historical debate in Japan as in other parts of the world. Further, it underscores the necessity for universities and academic journals to re-examine their maintenance of proper scholarly standards, and to prevent the dangerous erosion of research integrity.

For both of these approaches to succeed, policymakers need to develop networks where scholars around the world can share ideas on how to combat the flawed research techniques of denialism and the erasure of inconvenient histories. International bodies like the European Federation of Academies of Sciences and Humanities (ALLEA) and the European Network of Research Ethics and Research Integrity (ENERI) are increasingly doing just that by promoting international dialogue about methods to strengthen systems of peer review and promote scholarly ethics. These initiatives offer solutions applicable to a diversity of countries and histories. The value of scrupulous research about the past, and the need to protect historical understanding from attack by the forces of un-remembering, transcend national boundaries.

Tessa Morris-Suzuki is Professor Emerita of Japanese History in the College of Asia and Pacific, Australian National University. Her publications include The Past Within Us: Memory, Media History (Verso, 2005), Borderline Japan: Foreign and Frontier Controls in the Postwar Period (Cambridge University Press, 2010), and Japan’s Living Politics: Grassroots Action and the Crises of Democracy (Cambridge University Press, 2020).