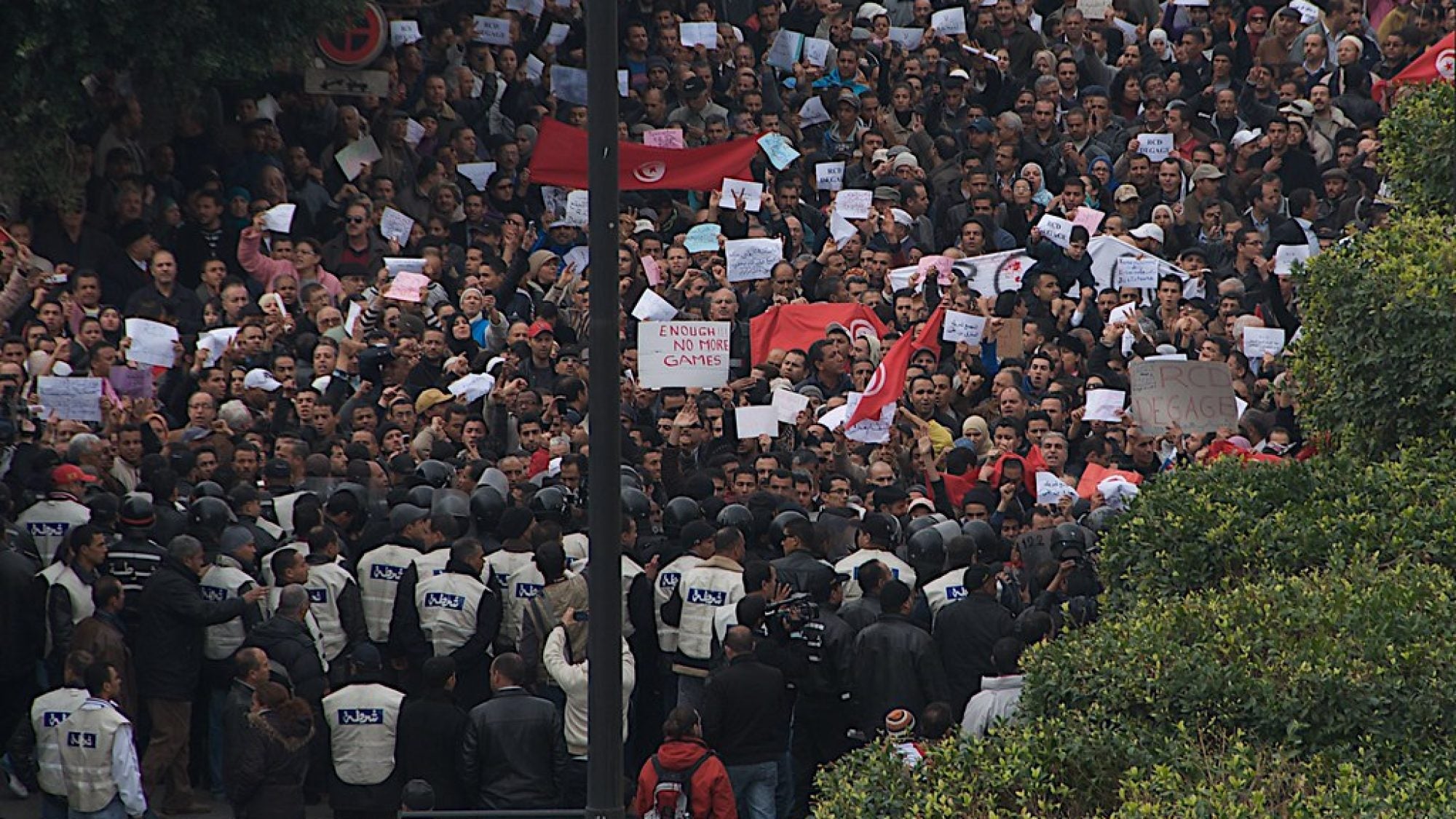 Three factors have delayed the consolidation of democracy in Tunisia and explain the country’s recent political crisis: ideological polarization, overemphasis on consensus, and an immature party system. The forms of democratic participation established in the post-2011 Jasmine Revolution have failed to generate an accountable government and economic prosperity. Such failures may jeopardize the democratic gains the country has already achieved, such as the military’s noninterference in politics, security sector reforms, and the increase of citizens’ democratic consciousness.

Flanked by security officials and traditionally apolitical military officers, President Kaïs Saïed’s July 2021 power grab has plunged Tunisia into its worst crisis since 2011. Despite his pledge to respect hard-fought civic and political freedoms, Saïed stunned both domestic forces and international observers by suspending the parliament, firing the prime minister, carrying out arbitrary house arrests, imposing travel bans, and declaring a nationwide curfew. Saïed has expanded his presidential powers via decrees and constitutional amendments. Tunisian political opponents denounced his actions as a coup, while his supporters saw it as the only way to establish political stability and efficiency. However, Saïed’s moves have exposed several critical weaknesses within the only nascent democracy in the Middle East and North Africa (MENA). Without a renewed commitment to freedom of speech, rule of law, and, most importantly, an accountable government able to take bold and effective action on the economy, Tunisia will find it hard to avoid falling into the curse of Arab authoritarianism. It is too early to assert whether Tunisia’s democratization since 2011 is truly ephemeral. However, the ongoing political instability and bickering between secular and Islamist elites has clearly exposed three key vulnerabilities of the post-revolutionary democratization process.

First, the early days of Tunisia’s post-revolutionary political milieu were characterized by intense ideological polarization. Political confrontations between Islamists and secularists led to the role of Islam in politics and society, the interdiction of blasphemy, gender equality, and homosexual rights becoming core issues of debate in the parliament and media. Unfortunately, this sidelined development issues such as economic depression, unemployment (particularly among youth), inflation, and trade deficits while politicians were enmeshed in power struggles. This pattern has caused the critical challenges Tunisia faces to be interpreted as ideological sparring rather than pressing socioeconomic challenges. Consequently, democratic institutions have failed to generate an effective government capable of addressing the root causes of the 2010-2011 revolution. COVID-19 has further exacerbated Tunisia’s socioeconomic issues and citizens’ pessimism about the government’s capacity to solve problems, leading to nationwide protests. On June 27, 2021, several political parties, civil society associations, and national public figures advocated for the resignation of the prime minister and parliament for failing to resolve the ongoing crisis, and called for a “Referendum Front” to prompt the government to schedule a national referendum on modifications to political and electoral systems.

Second, Tunisian consensus politics have begun to falter. When ideological fractures reached their peak in mid to late 2013, various parties and organizations tried to find common ground, make substantial concessions, and balance the interests of major stakeholders. These decisions mitigated political tensions, enabled Tunisia to avoid civil war, and resulted in the country’s political actors receiving the 2015 Nobel Peace Prize. This consensus-based politics has persisted, evolving into principles which emphasize agreement and power sharing mechanisms between opposing political parties. Alas, this national unity framework did not resolve the underlying ideological cleavages between leading parties. Insistence on consensus has instead thwarted the emergence of a genuine and effective political opposition. Following the 2014 elections, major parties created a power-sharing coalition and appointed electoral losers to the cabinet, which prevented opposition parties from presenting an effective alternative to the ruling government. This consensus-based approach also led the parties to deliberately avoid difficult and controversial issues. They eschewed executing structural reforms, fighting corruption, and prosecuting criminal officials from the Ben Ali regime to allegedly preserve national unity. The result was a widening gap between political elites and citizens, who believe that their interests have not been appropriately represented.

Third, deficiencies in Tunisia’s party system contributed to the broader weakness of the country’s democracy. Tunisia, lacking a tradition of genuine political pluralism, witnessed a proliferation of dozens of insignificant political parties following the 2010-2011 revolution. Most of them are personality-driven and lack clear programs, positions, or coherent political visions. Such shortcomings have prevented them from representing specific constituents effectively, instead offering favorable conditions for “party nomadism,” as politicians have frequently migrated from one party to another. Even Ennahda, the country’s most organized political party, and Nidaa Tounes, the party that won both the presidential and parliamentary elections, have suffered from structural fragility and internal strife. Due to a lack of internal democracy, these parties have followed the “iron law of oligarchy,” whereby the parties’ decision-makers develop oligarchic tendencies, prioritize personal ambitions and gains over institutional improvements, and marginalize rank and file members. In fact, both Ennahda and Nidaa Tounes can be best characterized as “protest parties” rather than as “ruling parties.” While they once launched successful anti-ancien regime and anti-Ennahda platforms, respectively, neither have proven more competent than the rivals they criticized.

The Tunisian case shows that merely holding pluralist elections does not necessarily guarantee a successful democratic transition. When new institutions fail to bring about an accountable government that functions effectively and is responsive to citizens’ expectations, transitional democracies weaken and endanger the democratic gains that citizens fought for.

Today, the military and the population’s reactions to Saïed’s moves are particularly worrisome and may result in a reversion to authoritarian rule. The traditionally apolitical military and its non-interference during the political transition process were important reasons why Tunisia followed a different path from other post-Arab Spring countries. This republican tradition is under threat as Saïed has involved military officials in government meetings and employed military courts against civilian political opponents. President Saïed’s cooption of the military, which saw soldiers present during his dissolution of parliament in the summer, may signal a substantive shift toward the politicization of the military.

The large number of Tunisians supporting President Saïed’s actions is a matter of concern, since it underscores their disillusionment with mainstream party elites and an overall distrust in the political system. The omnipresent slogan of “Vive Ben Ali” in demonstrations at the 10th anniversary of the Tunisian revolution is both ironic and highlights the distance Tunisia is from a real democratic culture.

Today, President Saïed strives to consolidate his regime’s legitimacy by appointing the first woman head of government in Tunisia and the Arab world. Notably, the new cabinet also includes eight women. While such appointments are laudable, it does little to solve the country’s ongoing crisis. Under domestic and international (United States and European Union) pressure, the president has announced the initiation of a dialogue about electoral and political changes; however, the dialogue will not include “those who stole the people’s money and traitors,” which probably means that some major political parties, such as Ennahda, will not be invited to participate. These inter-party struggles will only prolong Tunisia’s current political uncertainty. The government must guarantee opposition parties’ freedom of speech without the threat of disruption from military and security forces. The president also needs to establish the rule of law rather than resort to constitutional amendments as a tool to increase his power. In addition to political volatility, Tunisia is confronted with serious economic woes and must initiate effective reforms to attract foreign investors in order to mitigate the harsh conditions that the International Monetary Fund will certainly impose in exchange for a rescue loan.

Dr. Yahia H. Zoubir is Professor of International Studies and Director of Research in Geopolitics at KEDGE Business School in France. He is the author of numerous books and articles on politics and society in North Africa. In 2020, he published an edited book, titled, The Politics of Algeria: Domestic Issues and International Relations (Routledge). He has coauthored with Chuchu Zhang “Resisting Change: Contrasting Tunisian and Algerian Authoritarian Regimes’ Management of Islamism and its Outcomes,” Middle East Policy, 27(4), 2021: 83-102.