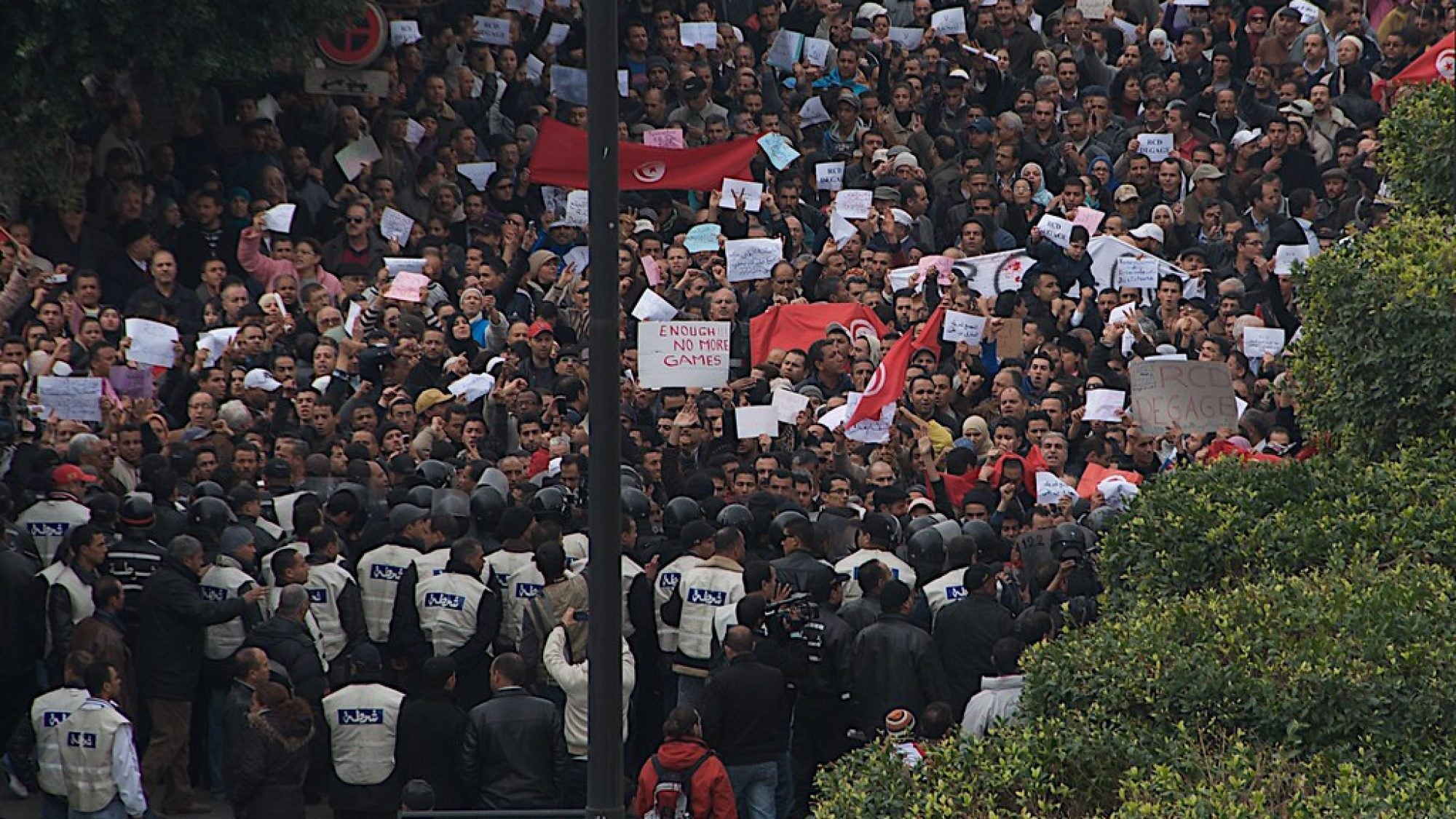 Tunisia is on a path toward autocracy. President Saied’s consolidation of power since his suspension of parliament in July 2021, the continued absence of a Constitutional Court, and the muted response from the international community follow a pattern familiar to the Middle East and North Africa. The historic appointment of a woman as prime minister is significant, but it should be understood in the context of how autocrats often seek to appease Western governments to gain their acquiescence. Unless President Saied resuscitates the constitution of 2014 and allows for parliamentary elections to be held, Tunisia’s democratic institutions are at risk of becoming mere props in a Tunisia ruled by presidential decree.

On July 25, 2021, President Kais Saied of Tunisia suspended parliament, claiming to be acting in accordance with Article 80 of the Tunisian constitution. This article gives the president the power to take certain measures during a thirty-day period, in the event of “imminent danger threatening the nation’s institutions or the security or independence of the country.” The historical track record of one branch of government seizing power “temporarily” suggests these measures often become permanent. In Tunisia, matters are complicated further by the fact that the Constitutional Court, which is supposed to determine whether the president’s actions are constitutional and whether “extraordinary circumstances” still prevail after the thirty-day period, is not yet functional due to a political stalemate since 2014 on how to appoint judges. In the absence of an independent entity to make such a determination, President Saied extended the suspension indefinitely once time ran out. Tunisia, which ten years after the “Arab Spring” was the only country holding on to a democratic process, is now effectively ruled by presidential decree.

Both the United States and European Union expressed concern over the developments and urged President Saied to adhere to democratic principles. At least in public, however, there was no real pressure on Saied to reverse his course. Meanwhile, autocratic states in the region, such as Saudi Arabia, the United Arab Emirates, and Egypt expressed support for President Saied, viewing him as an ally in countering the influence of political Islamists. In short, the international reaction suggests Western powers remain more interested in “stability over democracy” in the region, while regional autocrats view the developments as a strategic advantage in consolidating their own power.

In the meantime, the core problems that ordinary Tunisians face continue unabated. Tunisia has long suffered from an economic crisis, which in 2020 was compounded by the COVID-19 pandemic. In July 2021, Tunisia had one of the highest levels of COVID deaths per capita in the world. Moreover, poverty and unemployment rates are far higher in Tunisia’s inland regions than in the coastal urban centers, which have been at the center of the country’s development economic strategy of tourism and manufacturing from the Bourguiba regime onwards. This regional inequality is a fundamental reason for Tunisia’s continued instability, and a key factor in understanding how Saied’s populist message of being an “outsider” to the political establishment could gain such traction. To be sure, the president is popular—Saied won the run-off election for the presidency in 2019 with 73 percent of the vote and appears to have enjoyed widespread support for his initial actions when he suspended parliament. Celebrations were indeed exuberant on the eve of the president’s announcement and many Tunisians have had enough of their politicians and political parties, who they widely regard as corrupt and incompetent.

However, the post-colonial history of the Middle East and North Africa (MENA) region is one of autocracies established on populist policies, which, when they failed to deliver on their promises, increasingly turned to repression to maintain control. So far, there is no reason to believe Tunisia is on a different trajectory. President Saied did ramp up efforts to vaccinate the population and imposed a vaccination mandate on Tunisians and foreign visitors, prompting many Tunisians to applaud “the return of the state.” An estimated 42 percent of the population has been vaccinated and infection rates have been falling steadily since late August. As of yet, however, Saied has not presented a plan for how to address regional inequality and unemployment in Tunisia, beyond the usual slogans to fight corruption and revitalize the economy. President Saied’s campaign against corruption—a centerpiece of his justification for seizing executive powers—has been criticized for merely providing cover for “score settling” against political opponents.

President Saied also follows the path of previous autocrats in other respects. On September 29, 2021, President Saied, a social conservative known for his opposition to equal inheritance rights for women, appointed Najla Bouden Romdhane as prime minister—the first female prime minister of Tunisia and indeed the first in the Arab world. To some, this represents nothing more than autocrats deliberately adopting “progressive” policies in order to gain legitimacy in the eyes of the international community. Aspiring autocrats are fully aware of the intense focus on women’s rights in Western political discourse. By appearing “moderate” with respect to gender equality they not only provide themselves with a certain measure of legitimacy, but arguably also alleviate potential domestic pressure from Western human rights groups and governments.

Thus, it appears history may be repeating itself: the West is acquiescing to an aspiring populist, partially due to the perceived threat from a resurgent political Islam. For the US and EU, the fact that some 6000 Tunisians joined the Islamic State (IS) during its peak—the highest per capita number in the world—is incentive to maintain a good relationship with Tunisia’s government as a partner in counterterrorism efforts. While U.S. lawmakers have debated cutting U.S. funding to Tunisia, the apparent popularity of President Saied’s actions may temper their willingness to sanction his regime. Similarly, the European Parliament has expressed alarm about President Saied’s consolidation of power, but stopped short of specifying what material consequences it may have on Tunisia-EU relations.

President Saied is an unknown entity in many ways—should he signal an interest in nationalizing the economy and ending security cooperation with the EU and the US, their deep passion for democracy in Tunisia would probably be reinvigorated. For now, President Saied has not made any moves that would directly challenge the interests of the EU or the US, reducing the likelihood that they will consider harsh sanctions against him. Rather, they find it prudent to continue their support, albeit with intermittent rebukes. However, if this is the path Western governments take in Tunisia, they ignore the historical lesson that autocratic stability is an illusion, which eventually collapses into chaos far worse than the messiness of democracy.

Democracy is under threat in Tunisia, but it is not yet dead. A decade is a relatively short time to develop the strong institutions necessary to curb a slide towards authoritarianism. Whether these institutions become mere tools for an executive president, or if they regain their independence and power, ironically depends on the choices of President Saied himself. He could choose to put his country back on the democratic path, helping to resolve some of the problems Tunisia’s young democracy has been wrestling with and establish himself as a historic “Father of the Modern Republic.” Or he could continue down the path of autocracy, further consolidate his power, and relegate democratic institutions to mere props in his regime.

Among domestic actors, the powerful umbrella organization for Tunisia’s labor unions, the Union Générale Tunisienne du Travail (UGTT), and other civil society actors could be in a position to pressure President Saied to hold parliamentary elections, rather than suspending the constitution, as he has expressed interest in doing. For their part, Western governments should take a longer view than they currently do and dispel old Orientalist tropes suggesting that the Arab world is not “ready for democracy,” a trope enthusiastically reinforced by the region’s autocrats. Any “stability” they believe they gain with an autocratic Tunisia will be short lived, because unless President Saied successfully addresses the economic and social woes of Tunisia, his popularity will soon erode and his regime will increasingly depend on repression.

Whether Western governments are serious in their commitment to democracy or merely prefer stability, this would be a good time for them to break the historical pattern and halt the vicious cycle of autocratic rule that they have contributed to in the MENA region for the past century. Instead, they should put pressure on Saied to resuscitate the country’s democratic institutions, push him to allow the creation of the constitutionally mandated Constitutional Court (which he has previously opposed), and involve Tunisia’s vibrant civil society in identifying independent judges for appointment to the Constitutional Court. Ultimately, the focus needs to shift from political maneuvering and score settling to the needs of the Tunisian people in terms of their access to employment, affordable food, and political freedoms.

Anders Härdig is Director of the Global Scholars Program and Senior Professorial Lecturer in the Comparative Politics and Regional Studies Program at American University’s School of International Service. His main fields of expertise are international politics and comparative and regional studies with a special focus on social movements and grassroots networks in the Middle East and South Asia.