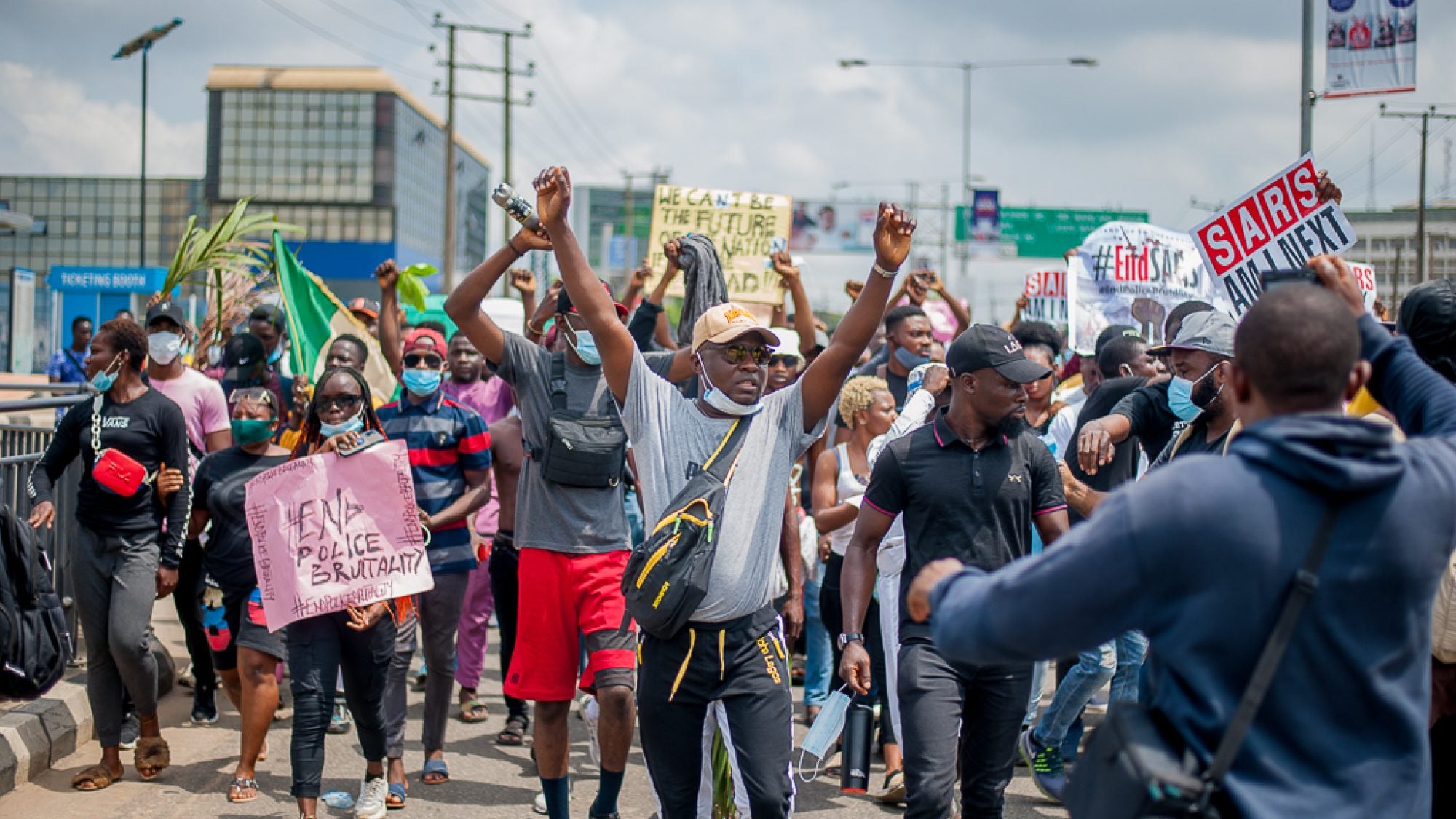 Title: #EndSARS: An Evaluation of Successes and Failures One Year Later

One year after the #EndSARS protests, police brutality and abuse still loom large in Nigeria. Although the #EndSARS movement achieved partial success in some areas, it has been largely unable to accomplish needed change because of overly modest demands and the government’s lack of creativity and political will.

In October 2020, an internet hashtag took Nigeria and the world by storm. #EndSARS, a call for the disbandment of Nigeria’s special anti-robbery squad (SARS) unit, was the top trending Twitter hashtag for weeks and drew the support of many world leaders, including the United Nations Secretary-General António Guterres and U.S. President Joe Biden. In a matter of days, the movement had grown beyond its online boundaries, morphing into massive nationwide protests which were met with fierce government repression. In the most publicized crackdown, the Nigerian military opened fire on peaceful protesters at the Lekki toll gate on the night of October 20, 2020. The attack drew the ire of the international community and earned a special CNN investigation. One year later, certain questions remain unanswered. One such question is whether the movement, which saw the death of at least forty-nine people in just one day, achieved its objectives. Another is the question of the legacy and lasting impact of the movement. Despite partial successes in sensitization and reparation, the movement has failed to create necessary change owing to modest demands and the government’s lack of political will.

Did #EndSARS Achieve Its Objectives?

Initially created in 2018, #EndSARS was reborn after social media reports of the shooting of a young man by SARS operatives in Delta State. Even though the Nigerian president quickly announced the disbandment of SARS, the protests did not abate, instead spreading rapidly across the country. Having suffered decades of police brutality and harassment, protesters made five demands: the immediate release of all arrested protesters, psychological evaluation and retraining of all disbanded SARS officers prior to their redeployment, compensation for all victims of police brutality, investigation and prosecution of errant police officers, and increased police salary. The implementation of these demands in the one year since the protests is examined below.

In making the initial call for release, representatives of #EndSARS protesters missed a golden opportunity to draw attention to the thousands of inmates awaiting trial—outside of the #EndSARS protests—across the country, many of whom had also been arrested for exercising their right to protest. Prolonged detention without trial continues to be a dominant feature of the Nigerian justice system. One reason cited for this is the use of remand proceedings known as “holding charge” under Section 293 of the Administration of Criminal Justice Act, 2015. The section allows a suspect to be charged before a magistrate lacking jurisdiction to try the offence who then remands the suspect in jail pending the “advice” of the Attorney-General. It has been argued that this practice violates constitutional guarantees of the rights to liberty and fair trial.

While commendable, this demand was arguably one of the weaker ones of the #EndSARS protesters, as it excluded other security bodies from retraining and evaluation. By demanding the evaluation and training of SARS operatives, the drafters and leaders of the movement seemed to have ignored the fact that, at its core, the #EndSARS movement was a protest against brutality by all security agencies including the police, military, and paramilitary forces. Although SARS was at the forefront of human rights abuses, abuses were not limited to it. The government’s response to this demand was correspondingly limited and half-hearted. Shortly after the disbandment of SARS, it announced in a highly crititicized move the formation of a new Special Weapons and Tactical (SWAT) unit, promising that SWAT officials would undergo psychological evaluations and training. However, by simply replacing SARS without further reforms of the wider police and paramilitary forces, the government adopted a narrow and grossly inadequate approach to addressing the issue of police brutality in the country.

Indeed, in the one year since the #EndSARS movement, the Nigerian police, military, and paramilitary agencies have continued to violate the rights of ordinary Nigerians. Amnesty International reports that at least 115 people have been killed by security forces in southeast Nigeria between March and June 2021, with 52 documented incidents of “unlawful killing” in the states of Abia, Imo, Anambra, and Ebonyi. Instances of extrajudicial killings continue to be reported in other parts of the country. For instance, in August 2021, a police officer was dismissed for shooting a motorcyclist in an unprovoked attack. In a report from October 2021, police officers shot a man dead in Akwa Ibom state, with the officers later claiming that the death was a result of an accidental discharge. Months earlier, autopsy reports of an inmate who had died in police detention revealed signs of torture.

Harassment associated with SARS has also not ceased. In October 2021, a viral video of a policeman assaulting a commuter dominated Nigerian social media. It was reported that the officer and his colleagues had extorted passengers and then asssaulted one of them when challenged.

In terms of its effect on police brutality, it is hard to conclude that the #EndSARS movement has had the desired result. Indeed, on the commemoration of the Lekki tollgate shooting, the Nigerian police reportedly harassed, beat, and arrested peaceful protesters and journalists. In one video, policemen could be seen hitting and harassing a journalist who was covering the anniversary event.

It is clear that ordinary Nigerian security operatives lack adequate human rights training. To address this, the government must institute a strict, regular system of human rights appraisal whereby security personnel are trained, assessed, and evaluated based on their compliance and respect for human rights.

Compensation for victims of police brutality

In the aftermath of the Lekki tollgate shootings, the Nigerian government ordered that “Judicial Panels of Inquiry and Restitution” be set up in each state to investigate allegations of brutality. Some of the panels have gone on to award money to victims. For example, the Lagos panel awarded $637,470 to 47 petitioners. However, not every state set up such a panel, with reports suggesting that such panels could not be set up because of financial and other challenges. The clear effect of this is that victims of police brutality in those states have no access to justice and compensation.

This practice of the creation of inquiry panels must be sustained and developed to improve the protection of human rights in Nigeria, especially the rights to life and freedom from torture. The government could, for instance, initiate a policy whereby every death at the hand of the state is compulsorily investigated through public inquiries and inquests. This would evince the government’s resolve towards respect for the sanctity of human life.

Investigation and prosecution of SARS officials

In 2019, a presidential investigative panel recommended the prosecution of thirty-three SARS officers. However, a year later, the country’s Attorney-General declared that there was not enough evidence to prosecute the indicted officers – contrary to assertions by the country’s National Human Rights Commission.

Despite the global condemnation of the Lekki tollgate massacre, the government failed to indict any official. It has instead continued to deny that the massacre happened. It would be a step in the right direction for the government to create a dedicated department within the Ministry of Justice for the investigation and prosecution of perpetrators of police brutality. A publicity campaign would need to be carried out to encourage citizens to make complaints and bring the attention of the department to cases of abuse and brutality. There is a clear need for a public and sincere policy of zero tolerance for errant officers rather than the pervasive culture of protection and endorsement.

This last demand was a sign that the protestors supported good members of the police and security forces, and it recognized that underpaying police officers encouraged corruption and abuse. However, since the protests, and despite rhetoric to the contrary, no substantive changes have been made to meagre police wages.

The #EndSARS movement was ground-breaking. It drew global attention to the excesses of Nigeria’s rogue SARS unit and showed the Nigerian peoples’ determination to fight for their rights. However, most of the underlying causes of the protests still exist. The government must create a system of mandatory public inquiries whenever a person dies at the hands of the police and other security agencies. Furthermore, there should be clear and easily accessible channels for reporting abuse by security agents. The government must also set a high human rights standard for security agents through the creation of a strict, regular system of human rights appraisal.

Allwell Uwazuruike is a human rights expert and lecturer at the University of Central Lancashire, United Kingdom. He is co-editor at Afritondo.