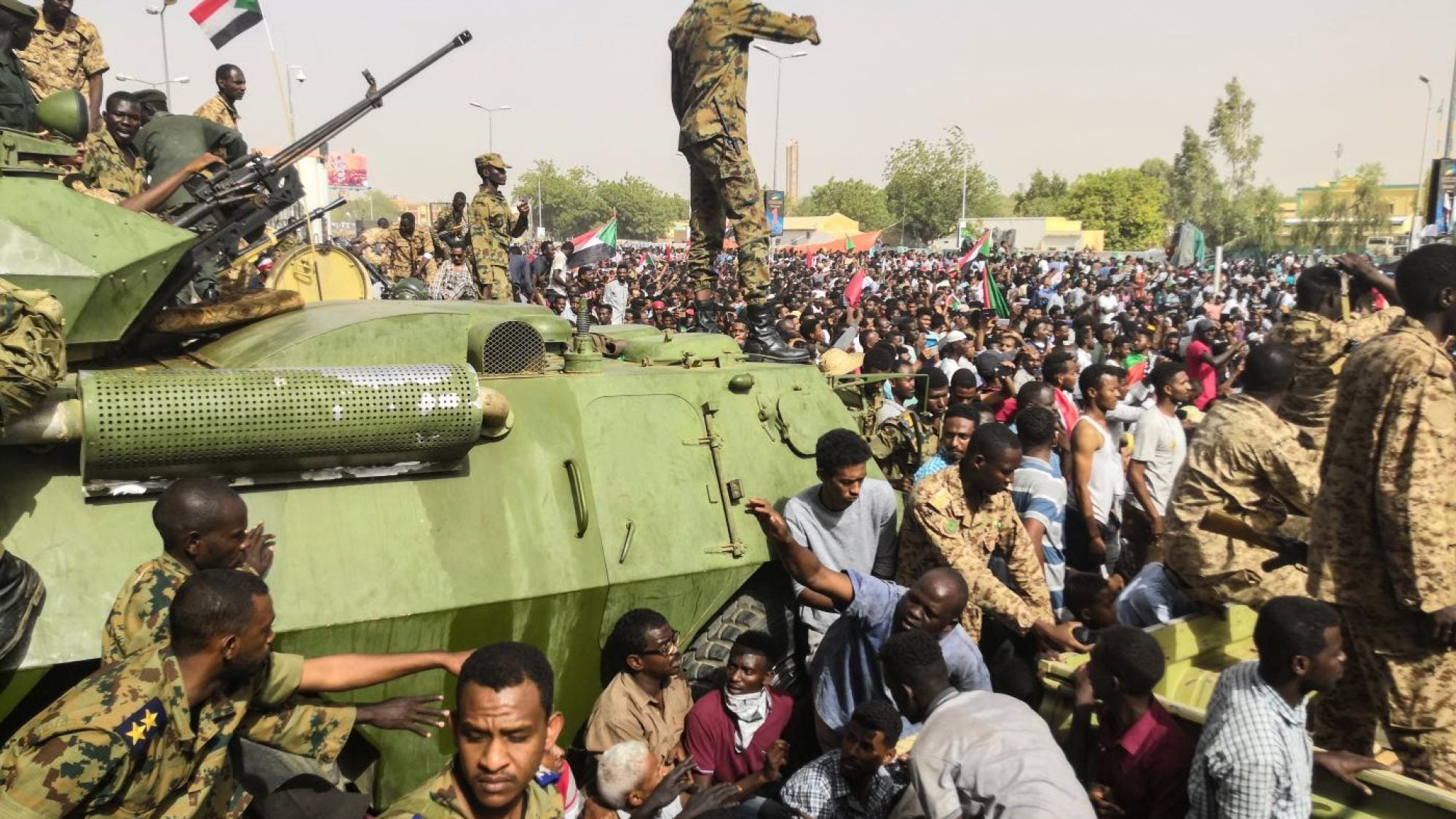 Title: To Promote Democracy in Sudan, Focus On the People

Sudan’s non-violent pro-democracy movement has declared that it will continue to protest the recent coup until the military hands over power to a civilian government. While military leadership has strong incentives to maintain control and avoid both financial and legal accountability for its decades of misdeeds, this stalemate will not end easily. The U.S. and Western allies can support a democratic transition by including the will of the people in their calculations and shrinking the space for coup leaders to maneuver.

The Chinese word for crisis, consisting of the concepts “danger” and “turning point,” offers a valuable framing for considering how to break a disturbing and chaotic pattern in Sudan’s recent cycle of protests and coups. Support for the non-violent pro-democracy movement in Sudan has been clearly articulated in the West, but it must also reflect the dedication of the protesters by not settling for the quickest end to the stalemate. The recent political agreement with the army’s autocrats to bring back the Prime Minister does not put Sudan back on the path to democracy. Sudan’s pro-democracy activists are in it for the long game.

The fragile transitional power-sharing agreement from 2019 was cut short on October 25th, 2021 when the chair of Sudan’s Sovereignty Council, General Abdel Fattah Al-Burhan, placed Prime Minister Abdullah Hamdok under arrest, dissolved the sovereignty council and cabinet, declared a state of emergency, and detained most of the cabinet and several high-level political leaders. He also released members of former President Omar al-Bashir’s banned Islamist party and installed them in leadership positions. Although Burhan said he acted to protect the transition, it was widely assumed that he was afraid of losing lucrative private business deals as military control over the economy was dismantled, and that he wanted to stop the push to send President Bashir to the International Criminal Court to be tried for genocide. Reaction from Sudan’s civilian coalition leaders and the international community was swift and negative. The United States, its allies, and the World Bank froze assistance funds. The African Union suspended Sudan’s membership. World leaders and human rights bodies insistently called for the release and restoration of the civilian cabinet and prime minister. Even with the backchannel expressions of support General Burhan may have received, he was quickly and effectively isolated on the international stage.

The coup galvanized the Sudanese people to once again organize a series of nationwide protest marches, blockades, boycotts, and social media campaigns that continued in the face of a near-total internet shutdown and violence. The security forces’ use of live fire at protests has wounded hundreds and killed at least 41. Moreover, despite highly publicized releases of prisoners, large numbers of protesters and former officials remain in jail amidst allegations of abuse and torture. This strong response from Sudanese activists against the military takeover should not have surprised anyone. Sudan’s 2019 revolution was a bottom-up movement that sustained by de-centralized and covert planning committees, even while political parties were often squabbling and unhelpful. More than 60 percent of the country’s population is under the age of 30, and they have grown up in a country squeezed dry of its wealth and resources by decades of corrupt autocratic and military rule. They are in no mood to see a protégé of the former president strangle their young democracy before it can grow, and they have been rapidly learning how to organize highly effective protest campaigns for maximum impact locally and globally.

Power sharing with the military as the transitional constitution requires may have seemed palatable two years ago because it included provisions to identify and punish the perpetrators of the June 2019 massacre where at least 120 protesters were killed and over 900 injured. But now, as the security forces aggressively target heads and chests, invade hospitals to block aid to the wounded, and forcibly shave the heads of protesters, the patience of protestors has faded. Protestors now call for the military to fully step aside, and resistance committee leaders have announced they will not stop the protests until it does.  This creates a difficult stalemate between an entrenched military that has enjoyed the full benefits of a captured economy, without accountability for past crimes, and the nation’s mobilized youth and marginalized people who have been victims of state-sponsored violence and denied any share in its wealth for decades. Caught between the two sides, the beleaguered Prime Minister recently signed a new political agreement that reinstates him but changes nothing about the previous power imbalance that favored the coup leaders. After his release, Mr. Hamdok said that he agreed to this deal to spare additional bloodletting, setting aside the fact that he was signing the agreement with those who were spilling the blood.

For years, international mediators, regional powers, allies, and stakeholders have consistently prioritized power-sharing deals with armed groups followed by rapid elections as the fastest method to solving Sudan’s many conflicts. This only prolongs conflicts. The latest example is the Juba Peace Agreement, hailed as a major step to stop violence in the regions experiencing conflict. However, not only did it exclude women, youth, and minority groups from the many rounds of peace talks, it did not address their needs. In this context, the success of the nationwide non-violent protest movement is nothing short of miraculous. The protests that toppled former President Bashir in 2019 and the post-October 25 anti-coup protests have been an inclusive affair, as impressive numbers of Sudanese have put aside their differences to come together and risk their lives in opposing military rule.

Democracies of the world should take note. This chaotic process of revolution, disagreement, and protest manifests the birth and growth of democracies. Sudan’s allies must maintain a sharp focus on the democratic benchmarks of civilian control and transparent and accountable institutions. The military’s narrative – that it alone provides stability and that civilian governance is too unruly to be effective – must be put to rest. The military has had firm control for more than 30 years and has only appropriated the country’s wealth for itself. Further, the coup is clearly counter to the transitional constitutional document, which should remain the guide. The agreement signed by Prime Minister Hamdok contains no benchmarks or deadlines and fails to hold the coup leaders accountable for their unlawful actions and use of force against civilians. But its emphasis on the transitional constitution as the reference point provides an opening, for now, for supporters of Sudan’s transition to continue to press for increased transparency and the required transfer of power to civilians in the sovereignty council. The international community should leverage the protests to press for the quick creation of the legislative council and constitutional court. Furthermore, they should require these measures—along with government handover to civilian leaders—to ensure the release of funds and the reinstatement of AU membership.

The United States continues to play an influential role in the transition and should incentivize democratic behavior through means other than the sanctions it commonly relies on. Unfortunately, efforts to develop closer working relationships and plans for military professionalization with Sudan’s security forces – a key long-term goal – have not materialized quickly enough for the impatient Sudanese military leaders who wanted quick rewards. After the October 25 coup, it is hard to see how security and governance assistance can proceed with the same leadership still at the helm. Yet security force development and professionalization – emphasizing discipline, civilian protection, and civilian control – are the most imperative parts of the transitional process for Sudan. The U.S. and its allies should keep doors open to cultivate reformist members of the military who may step into leadership roles in the future if the transition resumes. The U.S. military is still greatly admired in Sudan, and it can demonstrate how professional militaries function in deference to civilian governance by meaningfully including civilians in the joint security activities it undertakes with Sudan, including military educational exchanges, joint exercises, high-level visits and consultations.

Additionally, there should be a spotlight on the possibilities of economic growth in a private sector uncoupled from the military. The targeted sanctions legislation put forward by U.S. Senator Chris Coons is a positive step that will hinder opponents of the transition while allowing economic and development assistance to resume for the civilian sector. The U.S. must keep the focus on Sudan’s civilians at all levels, providing visible support and elevating civil society organizations to their proper watchdog roles for the strengthening of nascent democratic institutions. President Biden’s Summit of Democracies initiative provides a timely opportunity to issue a public statement of commitment to support countries in transition, noting that the process is difficult and long. It should be an absolute priority to appoint and confirm an ambassador for Khartoum as an expression of U.S. seriousness towards the transition.

The people of Sudan have shown that they are fully committed to the process of growing their democracy. Democratic institutions are not sustained on handshakes and vague references to intended outcomes. Deadlines and benchmarks must be set by the U.S. and other supporters of Sudan’s democracy. Rewards must be clear and full. The international community should refrain from taking the easy way out by endorsing an agreement that does not transfer power to civilian leadership and create mechanisms for accountability. The old ways of ignoring quiet corruption and impunity cannot stand. The mechanisms of democracy should be strengthened until they provide protection to the diverse voices of the people of Sudan.

Linda Bishai has twenty years of experience in teaching, training, and writing on human rights and international law, peacebuilding, and security sector reform. She has worked on Sudan since 2006, supporting election violence prevention, police/community dialogues, and teaching human rights and civic education. She is an adjunct professor at the Elliott School of International Affairs at the George Washington University.