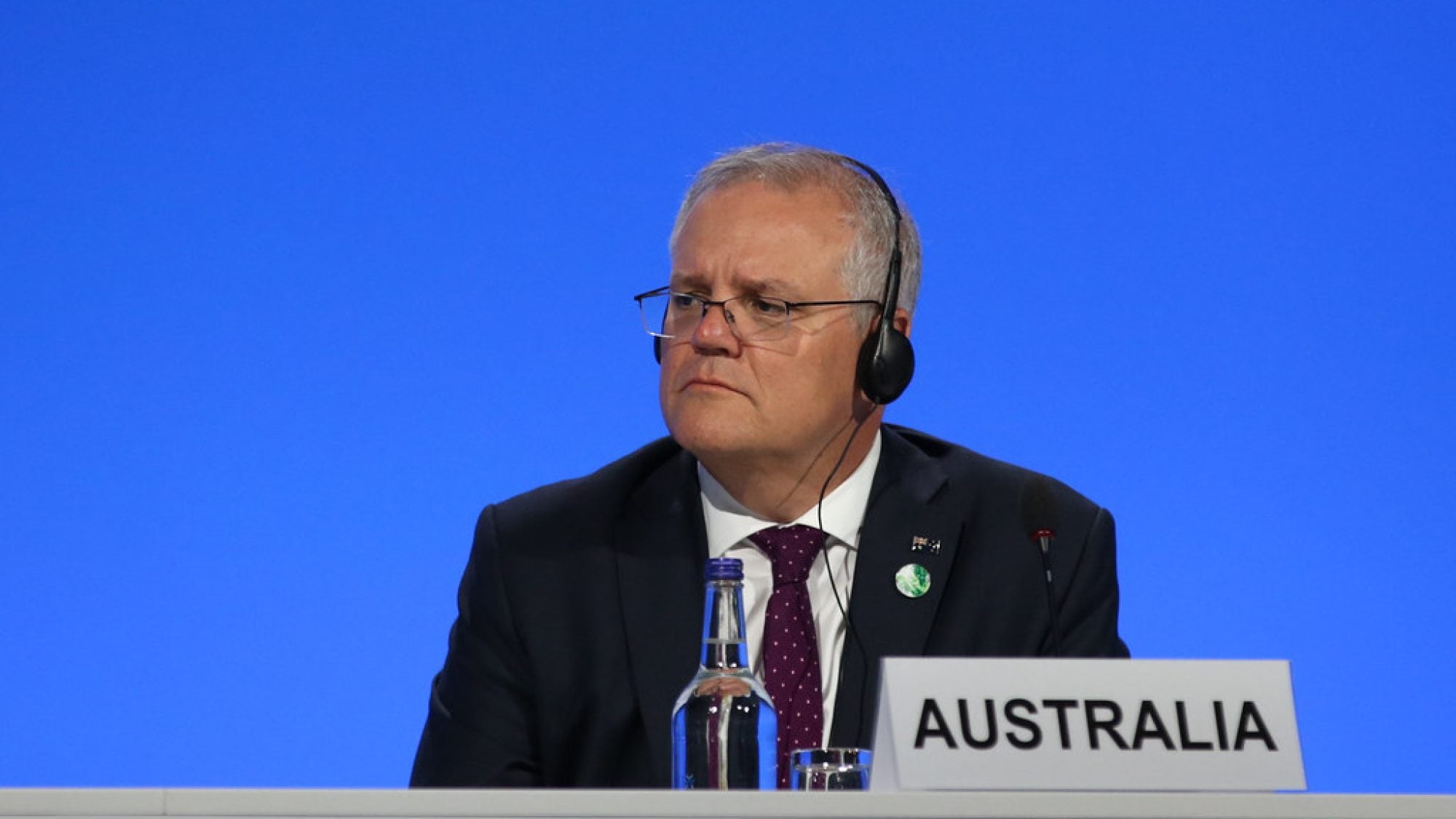 Title: Letting the Team Down? Considering Australia’s Approach to Climate Policy after Glasgow

For decades, Australia has dragged its feet on climate action because national interests have been reliant on fossil fuel exports. However, the COP26 UN Climate Change Conference in Glasgow last month makes it clear that this approach will need to be reconsidered. As the world shifts toward net-zero emissions, Australia is well placed to reposition itself as a renewable energy superpower.

This past November, the United Kingdom hosted the COP26 United Nations Climate Change Conference in Glasgow, precipitating a surge in momentum toward global climate action. Specifically, more than one hundred countries announced plans to achieve net-zero emissions by the middle of this century, and key wealthy nations pledged to halve their emissions by the end of the decade. As such, this summit was a critical test of the world’s commitment to tackling the climate crisis.

However, efforts to combat climate change are still short of what is needed. In 2015, the Paris Agreement set the framework for countries to provide new national targets for reducing greenhouse gas (GHG) emissions every five years. Thus, COP26 marked the deadline for the next set of targets, and while most countries committed to greater climate action than they did previously, the sobering reality is that these national targets still leave the world on track for catastrophic warming.

In Glasgow, most wealthy nations set a stronger 2030 target to cut emissions, and the G7 countries promised to collectively halve their emissions by the end of this decade. Yet, there was one country that let the global team down. Australia was the only major developed country that refused to pledge stronger emissions cuts by 2030. In fact, it proposed the same insufficient 2030 emissions target that it had proposed six years earlier in Paris. While the ink was still drying on the Glasgow Climate Pact, the Australian government even maintained that it would also ignore the Pact’s provision for countries to set a new 2030 emissions target in 2022, arguing that Australia’s 2030 target is “fixed.”

Australia’s reluctance to embrace climate action stems from a tendency to equate national interests with fossil fuel exports. This article explains how such a calculus has shaped Australia’s approach to UN climate talks for decades now and then considers how Australia might reposition in the future as a clean energy superpower.

A Long Road: Australia’s Approach to Climate Cooperation at the UN

Understanding why Australia drags its heels on taking climate action requires some historical background. When a scientific consensus on climate change emerged in the 1980s, Australia initially positioned itself as a leader in multilateral discussions, strongly supporting ambitious national targets to cut emissions. In 1989, then Foreign Minister Gareth Evans described climate change as “the biggest problem, the biggest challenge, faced by mankind in this or any other age.”

By the mid-1990s, however, under the influence of powerful fossil fuel lobbying, the Australian government decided that taking serious action on climate change was not in the country’s best interests. The argument, which has lasted until today, was that Australia is a fossil fuel-dependent economy, thus making it relatively costlier for the country to reduce emissions. In turn, a brutal assessment was made: rather than promote climate action, Australia would do what it could to avoid obligations to reduce emissions and instead focus on expanding its coal and gas exports. This assessment of Australia’s perceived national interests—misguided as it is—has shaped Australia’s approach to UN climate talks ever since.

For example, when the Kyoto Protocol was negotiated in 1997, Australia demanded concessions that not only exempted them from cutting emissions but even allowed the country to increase its emissions. Furthermore, when measuring progress for its Kyoto target against its 1990 base year, Australia also demanded that the emissions they released from land clearing would be included. These concessions allowed Australia to claim that it was “meeting and beating” its international obligations, despite the fact that its national emissions from burning fossil fuels continued to significantly rise. Indeed, between 1997 and 2020, Australian energy sector emissions rose by almost 30 percent.

In 2015, when a successor to the Kyoto Protocol was negotiated in Paris, Australia set a target that was among the weakest in the developed world, pledging to cut emissions by only 26 to 28 percent by 2030, compared to its 2005 levels. Australia’s Pacific neighbors strongly criticized this target, warning that if the rest of the world copied Australia’s low ambition, vulnerable island nations would disappear.

In Glasgow, Australia refused to strengthen the 2030 target it set in Paris. Yet, just days before the summit, conservative Prime Minister Scott Morrison announced that Australia would achieve net-zero by 2050. This announcement lacked much detail and appeared merely as a response to pressure from critical allies, including the United States and the United Kingdom; ​​Morrison even commented that Australia was finally accepting the net-zero target because climate change action had become a key pillar of the Western alliance.

Given the cursory nature of this revised target, we must also recognize Morrison’s addendum that Australia would achieve net-zero “the Australian way,” which does not involve shutting down coal and gas production or exports, nor does it even include reaching net-zero in 2050.

In order to continue promoting fossil fuels, Australia now finds itself among a small and isolated group of countries—including Saudi Arabia and Russia—resisting more ambitious global action to cut emissions.

How Australia Could Become a Renewables Superpower

Australia’s position at the back of the pack on climate ambition is by no means a forgone conclusion. While Australia’s fossil fuel exports are significant, Australia has a diversified, advanced economy with many alternative sources of income. For instance, Australia is both the sunniest and second windiest continent on the planet, thereby giving it incredible potential to transform the skilled workforce currently employed in the production of fossil fuels into a workforce working toward zero-emissions industries (e.g. clean energy exports to growing economies in Asia). With the right policies, Australia could establish a mix of clean energy exports—including renewable hydrogen, “green steel,” and the critical minerals needed for batteries and electric vehicles—which exceed the value of today’s fossil fuel exports. In short, Australia is uniquely placed to switch tack, should domestic politics—particularly politics at the federal level—permit it.

Although performance is mixed, Australia’s states and territories are already leading the way on this pivot. Australia’s two most populous states, New South Wales and Victoria, have pledged to halve emissions by 2030 from its 2005 levels (which is commensurate with the United States, which also aims to cut emissions 50 percent by 2030). A recent assessment suggests that each individual Australian state and territory exhibits a more ambitious climate policy than the federal government. Every one of the country’s sub-national jurisdictions had announced a commitment to reaching net-zero emissions by 2050 two years before the beleaguered federal government stumbled into its own net-zero commitment.

That said, Australia’s sub-national governments suffer from the same split loyalties between old and new ways of doing business—particularly old and new ways of sourcing energy—that many of the country’s allies grapple with under their own targets. While there are excellent schemes in operation at the state and territory level, these are still insufficient to reach the sub-national jurisdictions’ own long-term climate goals. Still, the framework for scaling up ambition is present and may well provide a model for future federal governments to scale up their ambition as well. With a federal election due in the next six months, and with the majority of voters in every electorate in favor of increased climate action, there is a real prospect that Australia may soon join its international allies as a peer on climate ambition.

Australia must realize that being one of the last nations to close the door on fossil fuels is no longer in its own national interests. However, Australia is well-placed to reposition itself as a renewable energy superpower of the Indo-Pacific. If Australia can make this necessary pivot, it may come to play a key role in the global effort to avert climate catastrophe, finally bringing an end to its long history of letting the team down.

Dr. Wesley Morgan is a researcher at the Climate Council. He is also an Adjunct Research Fellow at the Griffith Asia Institute. His research considers the ways countries integrate climate change into their foreign policy and national security strategies. Dr. Morgan has also written widely on Australia’s relations with Pacific island countries.

Tim Baxter is a senior researcher at the Climate Council and a professional climate communicator with an extensive history in environmental and climate law. A passionate educator, Baxter’s working life is now devoted to building momentum toward tackling the global community’s most pressing problem: the extraction and use of coal, oil, and gas.