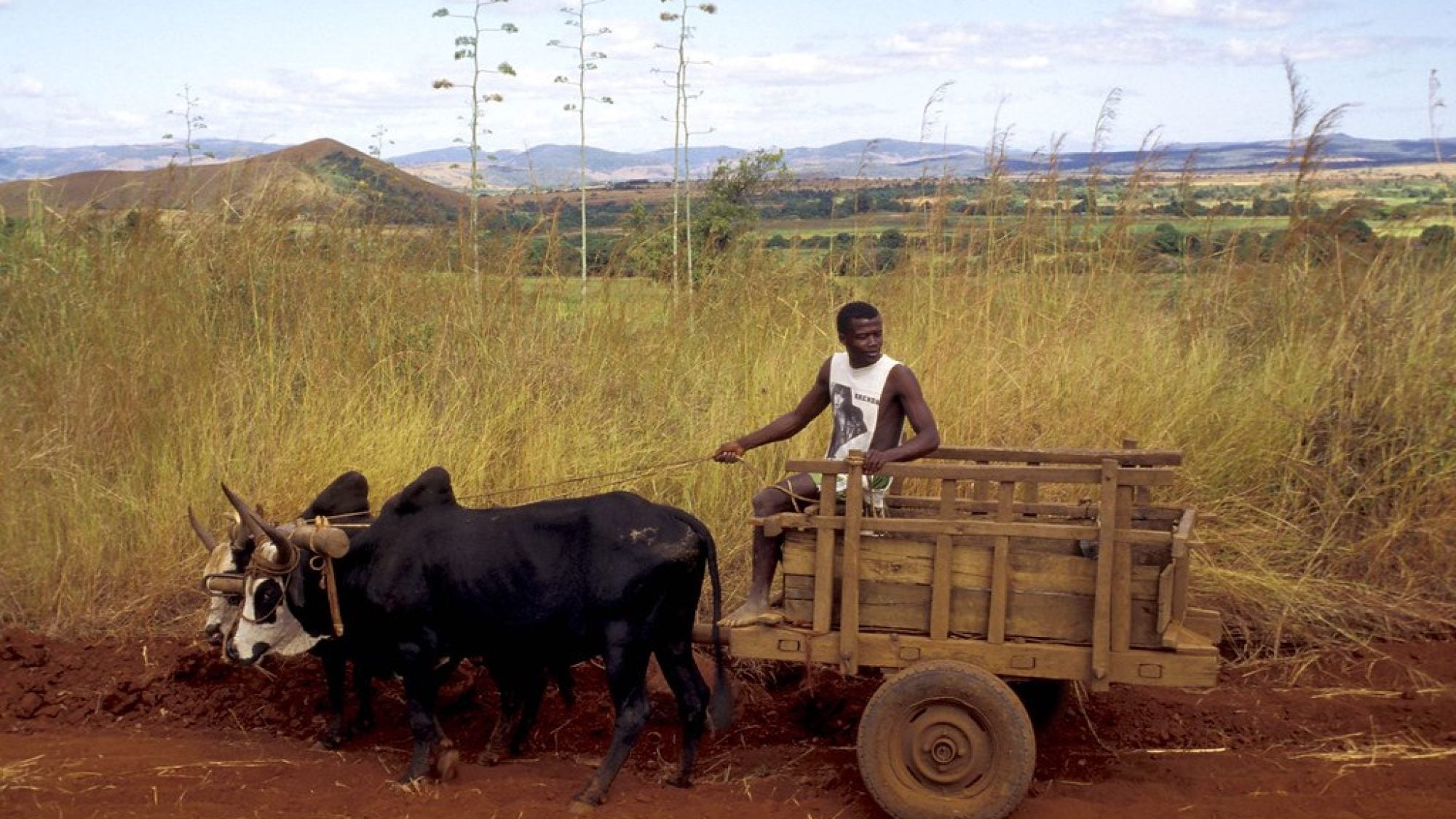 Climate change has brought historic drought to southern Madagascar, but placing all the blame on nature lets malfeasant policies, some of which have been in place since colonialism, off the hook. Preventing future famine demands a bottom-up reorganization of Madagascar’s food system and its relationship to the world.

In June of 2021, the World Food Programme (WFP) announced that 14,000 people in southern Madagascar were facing a Level Five “food catastrophe,” the most severe category of the Integrated Food Security Phase Classification. By late August, the number of people facing “food catastrophe” had doubled. Four years of drought have caused agricultural losses of up to sixty percent in some provinces, and malnutrition is expected to quadruple among the region’s children over the next few months. Farmers are being forced to sell their land—and future livelihoods—to feed their families. The situation is so dire that starving people in the south of the country have taken to eating insects. For those who know what happened here a century ago with cochineal, there is a morbid irony to this fact. Today’s famine is being blamed on climate change, but at its core lies decades of policy involution—an institutional habit of doubling-down on old strategies as crises mount. Preventing the next famine in Southern Madagascar requires a re-evaluation of existing approaches, a rejection of the “disaster” narratives on which these approaches depend, and a reorientation of food policies which prioritize self-sufficiency.

If all we knew of Madagascar was based on news stories from the last few decades, the WFP’s pronouncement of today’s food catastrophe would seem quite ordinary. Al Jazeera, the BBC, and The Economist all began their most recent reports on the food crisis with the same phrase, explaining that the island nation “has long been prone to” droughts, floods, cyclones, and disease outbreaks—natural disasters that have conspired to produce seemingly endless food shortages. In addition to environmental stresses, The Economist regularly attributes Madagascar’s ails to bad governance, greed, corruption, and an economy “riven with cronyism.” The World Bank claims “[Madagascar’s] economy has never experienced stable and continued growth, as all past growth spurts have been punctured by recurrent political crises.”

Foreigners have been accusing the Malagasy—the people of Madagascar—of bad governance ever since Queen Ranavalona stood up to European imperialists in the 1830s. After the French captured the island in 1895, administrators struggled to consolidate control, a humiliation they blamed on Malagasy nepotism and inter-ethnic conflict. For thirty years, the French tried and failed to collect taxes from the pastoral communities of the South, an administrative failure attributed to native sloth, incompetence, and racial inadequacy. Directly preceding independence, French officials ascribed growing support for communism to Malagasy naïveté and vulnerability to foreign agitators. Today, the U.S. State Department characterizes Madagascar’s business climate as one of “endemic corruption and weak enforcement of rules and regulations,” echoing the language of emissaries, investors, and colonial governors alike.

Today’s environmental narratives have similarly colonial roots. For 200 years, the parched environment of southern Madagascar has been used to explain why people starve there. French writers, intent on justifying the colonial government’s “civilizing mission,” saw hunger as a defining feature of the landscape, an everyday affair as common as the dry streambeds and spiny succulents that dotted the terrain. The harshness of nature explained the harshness and primitiveness of people. It also justified harsh policies in response. Nature’s flagrant disregard for human survival provided cover for political and economic violence: why blame famine on colonial mismanagement when starvation was woven into the very fabric of the country?

In truth, until the mid-1920s, mass starvation was not a common feature of southern Madagascar. Pastoralists planted prickly pear—a cactus with extraordinary drought resistance—as fodder for cattle. Dense thickets of the spiny plant were cultivated to feed family herds and protect villages from French patrols. Meanwhile, the plant’s nutritious fruit and high water content maintained human and cattle populations even during extreme drought. This cactus-based food system kept southern communities secure, healthy, and hydrated in an environment that received less than twelve inches of rain a year. Occasional hunger was an enduring phenomenon, but rarely mass starvation.

In the 1920s, French administrators—desperate to turn a profit—sought ways to make the land and people of the South more productive for European businesses. However, as long as prickly pear protected native lives and livelihoods, Malagasy pastoralists had little interest in leaving their cactus palisades to become wage laborers on foreign-owned plantations. The colonial leaders needed a way to break this human-plant-cattle interdependence. They needed to eliminate the cactus.

In 1924, colonial officials released cochineal—a tiny insect that devours prickly pear—into the cactus-rich South. As the infestation spread, cochineal destroyed the fodder, water, and shelter necessary for southern pastoralism. Herds collapsed and mass starvation set in over 34,000 square miles, an area one-sixth the size of France. Resistance to colonial rule weakened as the body count rose. Some estimates put the death toll as high as 30,000 people and 300,000 head of cattle. By the 1930s, the famine had partially achieved the colonial dream of a surplus labor force: the region became the colony’s most important source of unskilled workers as starving survivors left in search of work. The food system in the South never recovered. Since then, food crises have been commonplace, re-emerging every five to ten years. Today, the starving must eat insects in part because of the mercenary insects that destroyed their food system a century ago.

The current round of starvation has been described as “maybe the first climate change famine on earth”; Time Magazine proclaimed it “the first in modern history to be solely caused by global warming.” Yes, climate change is lengthening and deepening the pattern of dry years in southern Madagascar: the current drought is the most intense since 1981. Over time, intense droughts in the South are likely to become more frequent and the timing of rainfall will be less predictable. But it is a mistake to think climate change distinguishes this crisis from those that materialize every few years in the South.

Again, the age-old narrative of a hostile “nature” is providing cover for malfeasance, this time in the service of post-colonial policies. Inasmuch as Madagascar has “long been prone to drought,” it has also been prone to disruptive foreign intervention. Corporate land grabs continue to carve up and sell off the island’s arable land. The production of staple crops for domestic use is discouraged as foreign markets demand vanilla, cloves, and castor oil. And predatory lending is increasing as households struggle to adopt corporate-licensed agricultural technologies. Foreign and domestic advisors insist on an increasing array of top-down food programs and projects, as land concessions and export-oriented policies continue to undermine the food system from below—a development playbook that has not changed for decades.

Madagascar is experiencing a pattern known as the involution trap. In the study of socio-ecological systems, involution refers to the tendency for institutions to double down on current approaches as stressors mount. Doubling down (doing more of the same and doing it faster) may temporarily assuage the immediate crisis but invariably leaves underlying issues unresolved. In fact, involution often initiates a cycle of feedback that justifies further involution until the system can no longer meet its demands. Involution played a role in the 1920s famine as French colonial officials—increasingly committed to a plantation economy and convinced that cactus was the problem—waged biological warfare against the foundation of the food system.

Today, involution infuses the global community’s response to cyclical famine on the island. Development strategies continue to promote large-scale, export-oriented agribusinesses and contract farming despite a greater percentage of contracting households resorting to “consuming seed stock, skipping meals and gathering wild foods” than non-contract households. Furthermore, agribusiness models may disadvantage female-headed households’ access to employment and contracting, impacting food security. Extensification of cash-crops is still touted as a pathway out of poverty despite evidence in the case of vanilla (Madagascar’s most lucrative agricultural export) that producers experience essentially no improvement in food security.

Meanwhile, foreign states and corporations continue to encourage land concessions. In 2020 alone, contracts were signed for 561,000 hectares of land, an area larger than Delaware. Of this haul, a mere nine percent is intended for food crops, with no guarantee any food will stay in Madagascar. The remainder is earmarked for biofuel production. It is not clear how much of this land will eventually be leased away; many similar deals have fallen through. Nevertheless, it is disconcerting that any arable land concessions would be certified in a country where only five percent of the land is suitable for agriculture and seventy percent of the population depends on it for income. As with other contemporary policies, large scale land concessions were a colonial invention. Today, enormous tracts of prime farmland, sold off by the French a century ago, are still titled to foreigners who left no heirs on the island. There remains no process for recertifying this land.

As a systemic response, involution contrasts with revolution, in which actors work to reorganize the underlying structure of the system. It is in revolution that Madagascar and the global community must place its efforts: a fundamental re-evaluation and restructuring of food policies from farms to foreign investors.

Over the long term, a meaningful anti-famine response should include four objectives. First, planners must become better historians: states and development organizations must recognize that a century of policy involution has facilitated cyclical famine, not prevented it. Second, Madagascar’s limited arable land must be reserved for domestically consumed food crops, not exports that add flavor to Western foods, or lucrative concessions for foreign companies. Third, customary land tenure—especially the communal ownership upon which the South depends—must be protected. It is not clear that current efforts to decentralize land management and promote individual ownership will help. In fact, today’s land policies bear a worrisome resemblance to colonial strategies that facilitated land alienation. Finally, food policy must support traditional adaptive strategies that have enabled centuries of human survival in the South. For example, policies should encourage the return of diverse, locally developed cultivars, rather than subsidizing imported varieties.

A successful anti-famine response involves a bottom-up reorganization of Madagascar’s food system, one that fiercely protects the production of food as nourishment from the expropriation of food as profit. Such an approach means that many top-down (or outside-in) approaches should be reevaluated, and some interventionist strategies abandoned altogether. The warming of the planet is hampering food production and distribution in Madagascar and elsewhere, but the structural issues underlying the island’s food crises go well beyond climate change. Contrary to longstanding colonial and post-colonial narratives, neither nature nor the Malagasy are to blame for Madagascar’s problems.

Stian Rice is a food systems geographer and Assistant Research Scientist at the University of Maryland, Baltimore County (UMBC). His work examines structural violence within food systems and the origins of historical famine. He is the author of Famine in the Remaking: Food System Change and Mass Starvation in Hawaii, Madagascar, and Cambodia.

Image Credit: “mean of transportation” by micmol  is licensed under CC BY-NC-SA 2.0