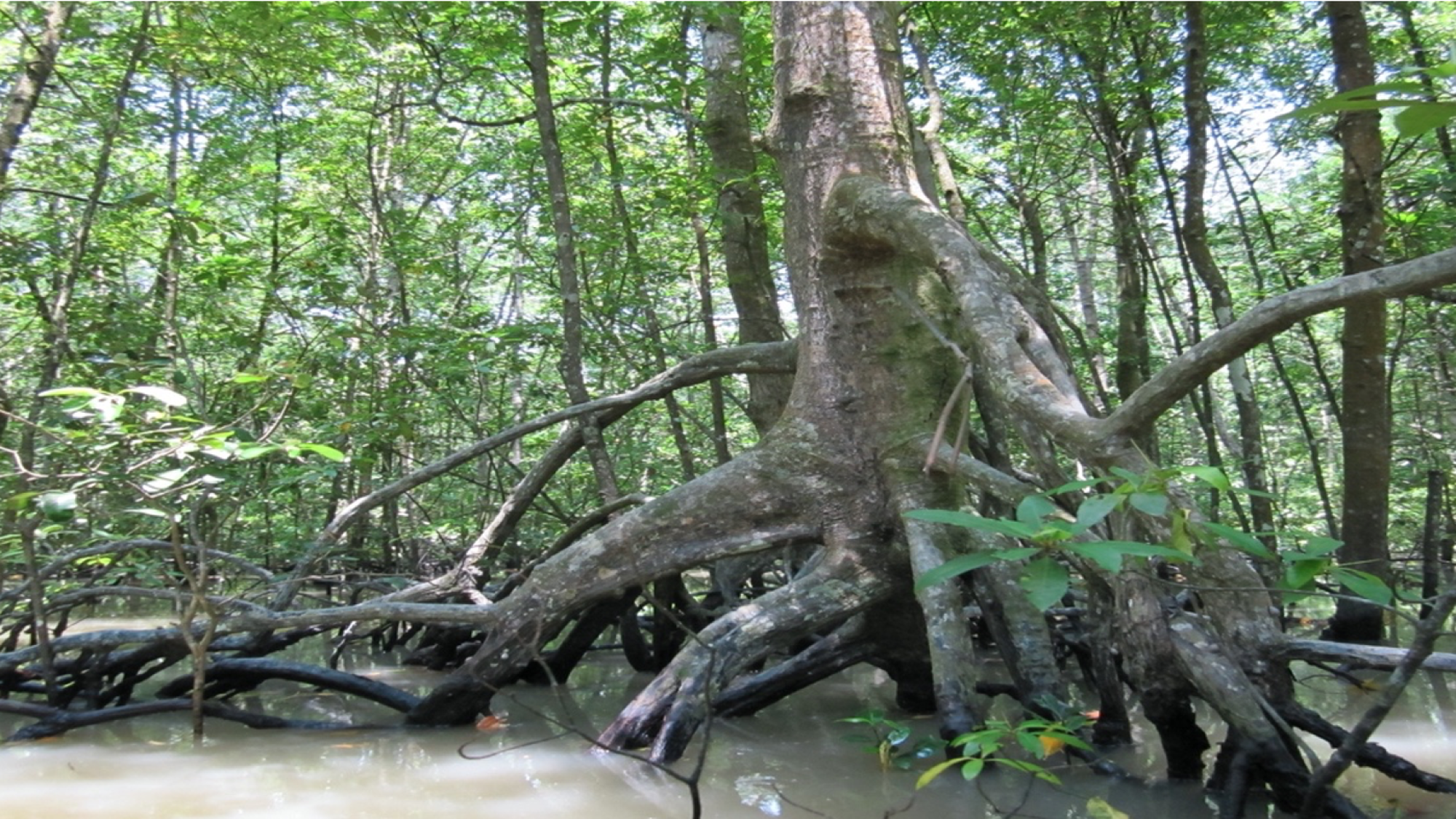 While mangrove forests were previously considered one of the most threatened ecosystems on the planet, the twenty-first century has seen a sharp reduction in mangrove deforestation. However, a stronger focus on national and international conservation policy is needed to ensure that these gains are secured into the future.

Mangrove forests are an iconic ecosystem covering 13.7 million hectares of coastlines in the tropics, subtropics, and warm temperate regions. Hundreds of millions of people rely on the broad range of benefits, or ecosystem services, that mangroves supply. These benefits include provisioning services, such as fish and shellfish, pure wood and construction materials, and traditional medicinal products and pharmaceutical compounds. Mangroves also provide important cultural ecosystem services like mangrove ecotourism, a multi-billion dollar industry, and represent strong cultural heritage and spiritual values for coastal communities. Mangrove forests protect these local communities through regulating services, such as pollutant trapping and the reduction of shoreline erosion. In the aftermath of the 2004 Indian Ocean tsunami, mangrove forests gained huge attention from their perceived role in buffering tsunami waves and protecting coastal communities living behind its thick trees. While the evidence for mangroves as a tsunami protection is now mixed, there is strong evidence that they can play a role in protecting human and wildlife populations against storms and coastal natural hazards of smaller magnitude.

Despite these important benefits, mangrove forests have long been considered one of the world’s most threatened ecosystems. In 2007, a group of world-leading scientists proposed that mangroves could be considered functionally extinct by the end of this century. Mangroves have a long history of being utilized for agricultural commodities, cut down by harvesting, and destroyed for urban development. In the latter half of the twentieth century, mangrove loss rates exceeded 2 percent annually as aquaculture production boomed throughout the tropics, leading to the rapid and large-scale conversion of mangrove areas to fish and shrimp ponds. Since 2000, however, satellite remote sensing analysis suggests that mangrove loss appears to be happening consistently around the world at a vastly reduced rate, with estimates ranging from 0.13 percent to 0.66 percent per year. In order to ensure permanent conservation gains, national and international conservation policy must be further strengthened by robust enforcement and monitoring of international climate change agreements and community-led management initiatives.

There are several reasons for the change in fortunes for mangrove forests. While a number of factors are at play, decision-makers now have a much better understanding of the ecosystem services of mangroves as well as their economic and social value. As a result, mangroves can be better incorporated into development planning and conservation policy. Recent national and international policies related to climate change have had a particular influence on mangrove conservation. Mangrove forests are now seen as a key carbon sink and contributor to climate change mitigation because they can sequester carbon dioxide from the atmosphere and store it in their waterlogged sediments faster and at higher densities than other terrestrial ecosystems. This means that mangroves are more efficient at storing carbon over the same amount of area, also known as their “blue carbon” value. Their conservation and restoration have attracted increasing interest by corporate entities who need to offset their emissions through the purchase of carbon credits, and national governments who are obligated to estimate carbon sinks and emissions from ecosystems through reporting mechanisms such as their Nationally Determined Contributions (NDCs) to the Paris Agreement. The role of mangroves in the ecosystem and positive impact on climate change can help curb national greenhouse gas emissions for countries such as Nigeria, Colombia, Bangladesh, Ecuador, and Cuba.

The blue carbon value of mangroves has noticeable conservation impact. In the buildup to the 2021 COP26 climate conference, several countries have made bold and ambitious announcements to incorporate blue carbon conservation into their NDCs. For example, Belize announced it would double the area of protected mangroves, halt net loss of coastal wetland habitat by 2025, and restore 4000 hectares by 2030. In addition, Costa Rica committed to protecting all of its coastal wetlands by 2025, and the Seychelles has committed to completely protecting its mangroves and seagrasses by 2030. All of these targets are designed to help these countries meet their climate change mitigation and net zero ambitions. This highlights the direct influence that global knowledge of mangrove ecosystem services (in this case their carbon dynamics) has had on conservation policy. While this is a positive indication, not all of the world’s mangrove forests are experiencing equivalent attention and conservation gains. Some countries such as Myanmar are still losing their mangroves at rapid rates due to the conversion to rice and oil palm and overharvesting for charcoal. This pattern of vast mangrove loss is also seen in many small island states.

Future conservation targets must rely on robust enforcement of protected areas and conservation laws. International agreements through the NDCs that set quantitative targets to protect specific areas or percentages of a nation’s mangroves should be encouraged. However, such targets are only sufficient if those newly protected areas are well managed, resourced and enforced, which is not guaranteed across many tropical landscapes. One way to improve the effectiveness of mangrove protected areas is to have them managed by local communities. If properly resourced, they are better able to monitor their mangroves and enforce their protection. Ambitious restoration targets assume that mangrove restoration can be conducted effectively. But, studies show that restoration projects are rarely successful due to plantation of mangrove saplings in inappropriate locations where they are unable to grow, and poor site maintenance and monitoring. Therefore, successful restoration can be achieved by community-led restoration initiatives that focus on understanding the underlying reasons why mangroves don’t survive. All these efforts need the oversight of local organizations as well as international umbrella groups such as the Global Mangrove Alliance who have aims to support the monitoring and improvement of conservation actions. Furthermore, since emerging deforestation frontiers may be driven by government targets around food and economic security in the near future, these demands need to be reconciled with national environmental policies, governments’ commitments to the global Sustainable Development Goals, and any carbon emissions implications of land use change that may negatively affect a country’s commitments to the Paris Agreement.

On balance, optimism about the trajectory of the world’s mangrove forests is warranted because national and international policies have influenced mangrove forest dynamics and secured ecosystem service provision for coastal communities. However, the global conservation community still needs to act to reduce ongoing habitat degradation and ensure that new deforestation frontiers and drivers of mangrove loss do not emerge. The increased policy focus on mangrove forests, their ecosystem services, and their blue carbon potential over the last decade is encouraging. This renewed focus toward mangroves shows that coastal managers and decision-makers have made pro-conservation decisions that are informed by more global robust knowledge of the value of mangrove forests. Moving forward with more attention towards local restoration efforts and international commitments, mangrove forests can be preserved and utilized to mitigate climate change.

Mangroves are still able to coexist with urban and industrial development in Singapore.

Dan Friess is Dean’s Chair and Associate Professor at the Department of Geography at National University of Singapore (NUS) as well as the Deputy Director of the NUS Center for Nature-Based Climate Solutions. His research focuses on blue carbon ecosystems such as mangrove forests, the threats they face, and their restoration. All photos are the property of Dan Friess, who has given permission to publish them for GJIA.