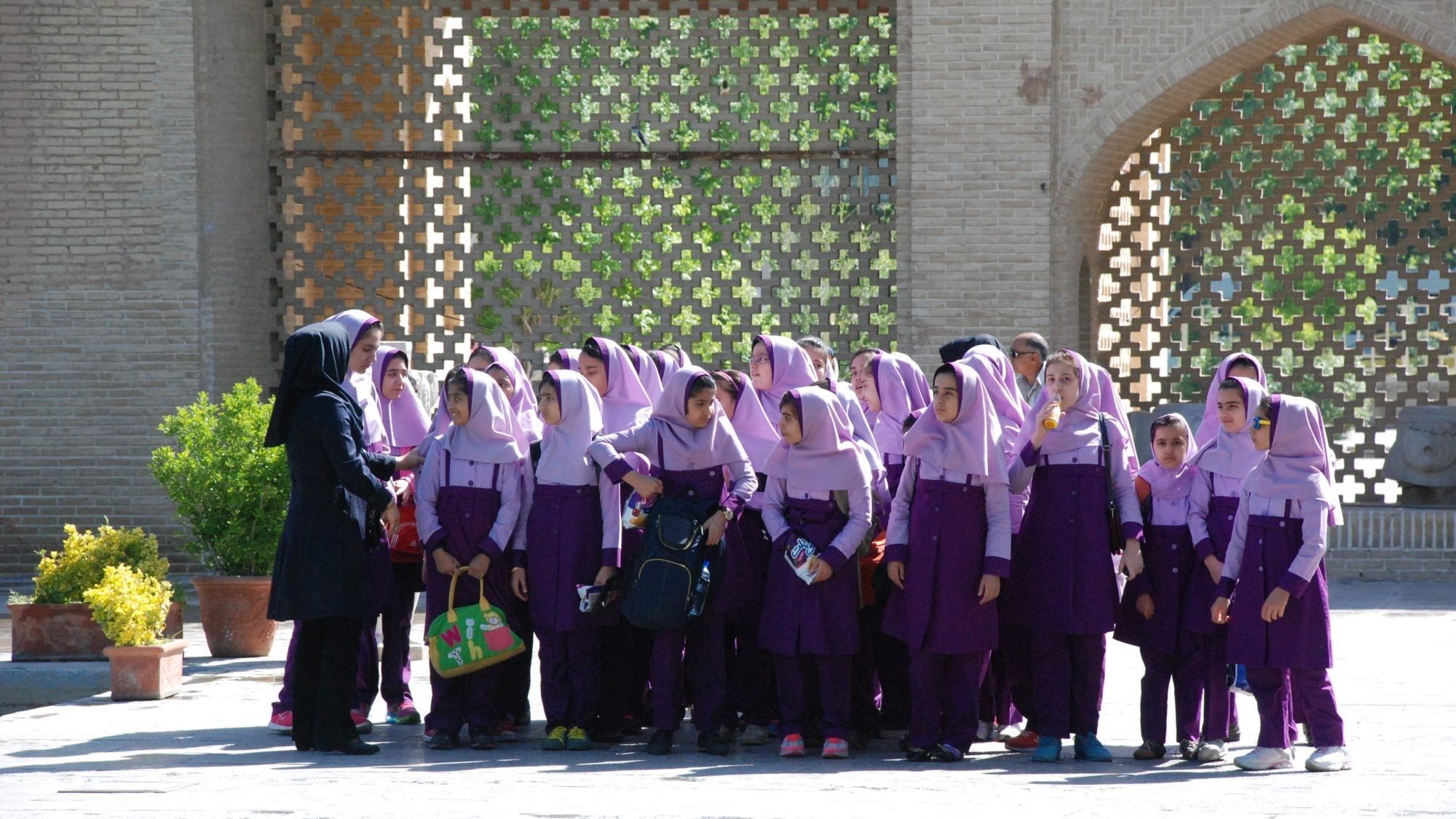 Title: Iran’s Educational System and the Institutionalization of Gender Inequality

Laws and regulations encourage institutionalized gender discrimination and inequality in Iran, ranging from differences in teaching boys and girls to extreme cases such as honor killings. This piece discusses how this discrimination is institutionalized in the Iranian education system. Substantial education reform is needed to address both this vicious cycle as well as for the state to fulfill its international human rights obligations.

In 2020, instead of attending school, a fourteen-year-old girl named Romina Ashrafi was killed at the hands of her father because she had eloped with a twenty-nine-year-old man. This heinous crime took place because Romina’s father felt his daughter had “damaged” the family’s honor. Romina’s case is not uncommon, but the outrage sparked by her killing forced Iran to consider amending Article 301 of the Penal Code. According to Navi Pillay, the UN High Commissioner for Human Rights, this article reduces punitive measures for fathers involved in so-called honor killings. Although an “urgent bill” to increase protections against violence for women was passed by the former president, Hassan Rouhani, it has languished for the past two years under the current president, Ebrahim Ra’isi.

The Iranian state has no motivation to tackle discrimination against women. In fact, Iran has institutionalized sexism through laws and regulations that create intentional inequalities between men and women, all justified using Islam. These rules have given male perpetrators free reign to proudly take the law into their own hands as divine executioners. Although honor killings are extreme cases, they stem from fundamental inequalities and discrimination, which begin before birth, are institutionalized in the education system, and then supported by law. Iran must fulfill its international obligation to ensure education is available, accessible, acceptable, and adaptable to all children, which would naturally address discrimination and inequalities in the educational system.

Iran’s institutionalized sexism impacts a child’s life before they are even born. For the year 2021-2022, Iran’s judiciary set the rate of blood money (diyyeh) at 480 million tumans [~US$113,738]. This amount only applies if the fetus is a boy. If the fetus is a girl, the amount is halved. Blood money is based on Article 17 of the Islamic Penal Code and is a form of punitive and restorative justice. Article 448 defines it as a “punishment to compensate for physical harm inflicted on individuals.” In this case, this would mean anyone who intentionally batters or abuses a pregnant women and causes an abortion would have to pay blood money (Article 622). Women’s lives are, therefore, decided by the state to be worth half of a man’s even before birth.

According to a framework based on the 1966 International Covenant on Economic, Social and Cultural Rights (ICESCR), to which Iran is fully bound, education must be available, accessible, acceptable, and adaptable (4-A Right to Education Framework). Due to numerous discriminatory laws, Iran fails to fulfill its obligations in all four areas. For example, the age of maturity for girls is set at nine and for boys at fifteen. This violates Article 1 of the International Convention on the Rights of the Child (CRC) that sets the age of maturity for all children at eighteen years of age. Iran has entered reservations to this convention, and, by setting the ages of maturity at nine and fifteen, is undermining the need for children to stay in school. Children may be pulled out of school after Iran’s age of maturity based on financial incentives, boys mainly for labor and girls mainly for marriage. Kinship interests and old traditions are other reasons why girls are married off early. The state encourages this culture to push its own ideological interests, which is to marginalize women for the maintenance of a patriarchal society and governance model.

Iran has one of the shortest compulsory education requirements in the world. Children are only obliged to attend school for five years. Even this short period of compulsory education is not entirely enforced by the state, particularly for girls. In instances when girls are married off or boys are forced into labor instead of attending school, the state fails to intervene. The difference is that girls are allowed by the state to be married as young as the age of nine, creating a legal path to deprive them of education.

For education to be acceptable, the subject matter and teaching methods must be non-discriminatory. In Iran, schools are segregated by gender, which makes discrimination against genders easily implementable. Girls are taught only arts and humanities to reinforce the belief that they are physically and cognitively weaker than boys. Boys, in turn, are taught science, technology, math, and sports to bolster the sense that they are stronger, smarter, and the natural heads of their families (Art. 1105). This schooling divide fuels the patriarchal belief that women are weak creatures that must be protected by strong and competent men. Men are given legal tools to exercise this power in the form of civil codes that force families into an unequal hierarchy. The law of Tamkin (submission), for instance, dictates that when a wife refuses to fulfill her marital duties, sexual or otherwise, the husband can withhold her maintenance payments (Article 1108). The husband controls the woman’s movement (Article 1114) and can easily prevent her from having a profession if he feels it is “incompatible with the family interests or the dignity of himself or his wife” (Art. 1117).

Textbooks are an integral part of education as they are the primary avenue through which societal knowledge and expectations are standardized and disseminated. In Iran, textbooks are visually and textually designed to discriminate against girls and enforce inequality in favor of men. A study shows that “discriminatory attitudes” against women and religious and ethnic minorities present in textbooks are not “accidental or sporadic” – the books are a platform for the state to extend its ideological campaign to children. One such ideology is that women’s sole role in society is to get married and to bear offspring, the earlier the better. Recently, pro-child marriage images were added to textbooks, campaigning that “marriage has no age limit, it just has conditions!”

Legally, girls as young as thirteen and boys as young as fifteen can be married off with the permission of their male guardians, and younger than that with the authorization of a judge. Based on official state reports, 217 girls under the age of ten, 35,000 girls ages ten to fourteen, and 170,926 girls ages fifteen to nineteen were married off in 2017-2018. However, this data is far from complete. Many early marriages are either registered much later than the actual date of marriage or not officially registered at all due to some legal restrictions. In rural areas, secret child marriages are still common.

While images of girls are included in textbooks discussing family and marriage, they are deleted when girls are depicted focusing on their education. For instance, in 2020, images of girls on the cover of third-grade mathematics books were removed. The only official reason given by the Organization for Educational Research and Planning, affiliated with the Ministry of Education, was to make the cover “less crowded.”

Discrimination against girls in Iranian schools is present in segregation, teaching methods, curricula, and stereotypes, all to ensure the state’s version of sharia stays legitimate and relevant. Even though this discrimination seemingly favors men, the state also robs them of all that can be achieved through equality between the genders. By not providing quality, equal education to all, the state enforces a gender hierarchy that trickles down to all layers of society and manifests in toxic relationships such as that of Romina and her father.

For traditional social attitudes to be challenged and discrimination to be eliminated in Iran, the state must provide quality education irrespective of gender. The Iranian state must withdraw its reservations to the CRC and ensure its principles are incorporated into domestic laws and regulations. This means that the age of maturity for both girls and boys should be raised to eighteen and measures should be taken to ensure children stay in school. Based on its obligations to ICESCR and the 4-A Framework, Iran should increase the number of years of free compulsory primary education, make it available to dispersed rural communities, and make progressive free secondary education accessible to all. The state must foster an acceptable human rights culture by integrating it into everyday teaching and school life. The state must ensure that all students are taught all subject areas and must avoid using the educational systems as part of its propaganda machinery. This means that private matters such as marriage and stereotypical roles for men and women must not be advertised in schools.

Dr. Shabnam Moinipour teaches social science methods in researching human rights at the School of Advanced Study, University of London. She is also a project manager at the Centre for Supporters of Human Rights, which focuses on the rights of landmine victims, women’s and children’s rights, and the rights of minorities in Iran. Dr. Moinipour has a PhD in human rights and media communications and an MA in theory and practice of human rights. Her recent publications include two articles on children’s right to education in Iran and a book entitled Human Rights, Iranian Migrants, and State Media: From Media Portrayal to Civil Reality.