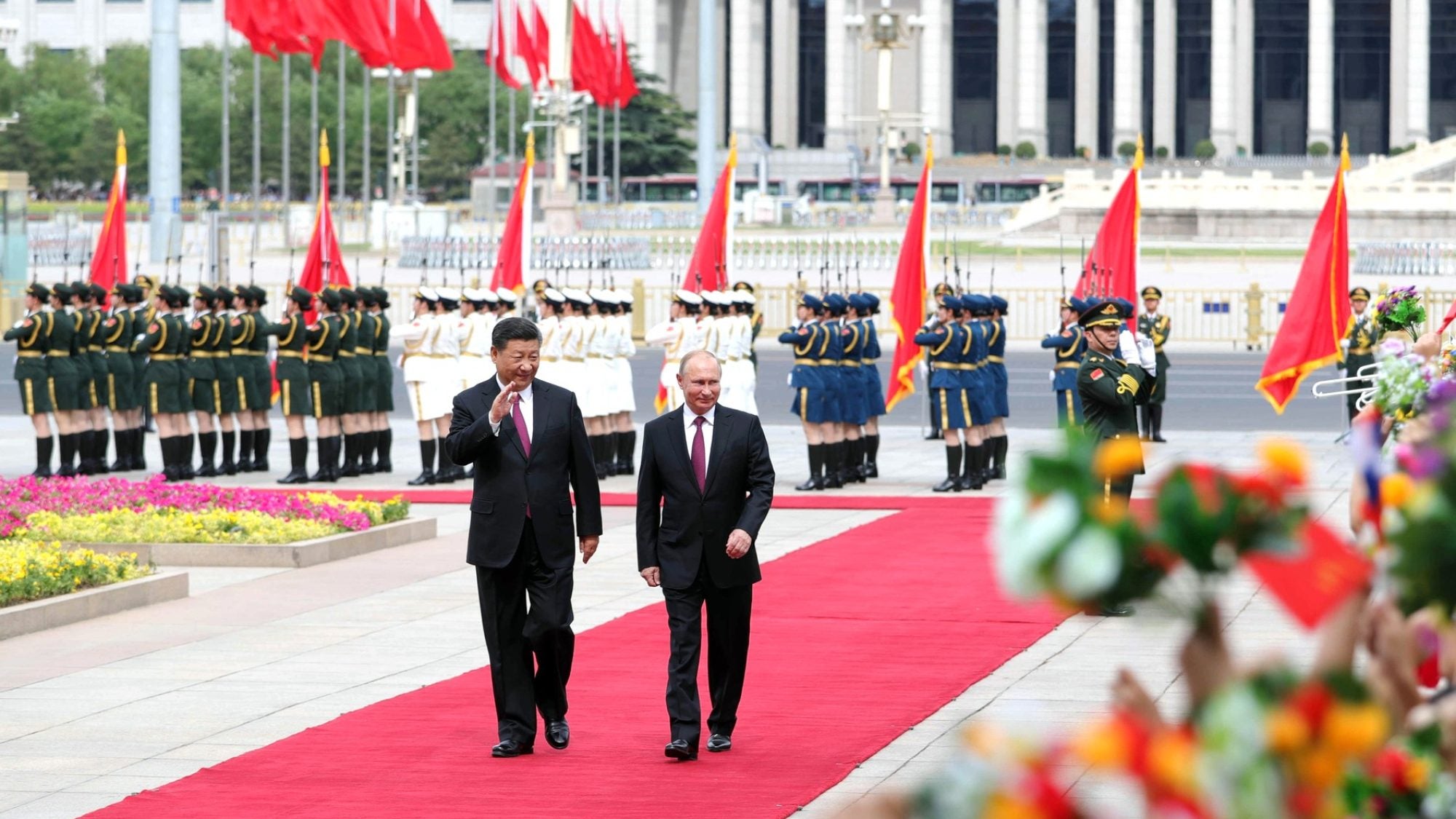 Title: The Logic behind China and Russia’s Strategic Alliance-like Partnership

Beijing and Moscow’s new-era strategic partnership of coordination reflects their shared insecurity and vulnerability in the U.S.-led global order. Their partnership is a declaration of joint counterbalancing on the global stage and an explicit commitment to support each other’s security concerns.

Why has China come to formulate an alliance-like partnership with Russia in recent years? After all, Russia has had a failing economy and a terrible global reputation—it is militarist, disruptive, and dangerous in its behavior in Europe. China, by contrast, prides itself on a thriving economy and on being pragmatic and moderate, engaging in long-term cooperation with advanced democracies. For decades, the socio-economic ties between China and Russia have been exceedingly hard to grow. Trade statistics show that, as of 2022, China’s trade with Russia accounted for only 2.7 percent of total trade, concentrated in raw materials and energy resources. By various accounts, differences in Chinese and Russian cultures and societies have been persistently profound.

Following the China and Russia Joint Statement on February 4, 2022, Chinese media explained the special partnership as a result of three conditions: the first is economic complementarities. China needs natural gas and other energy sources from Russia, and Russia needs China’s investment, goods, and its market. Second, on the global stage, both countries stand against American hegemony and stand up for the UN system, with sovereignty and non-intervention as their core values. Third, they face similar strategic power plays imposed by the United States and its allies: NATO expansion for Russia and conflict over the Taiwan Strait for China. Both countries feel a sense of chronic victimhood caused by the behavior of the West.

These are longer-term common interests and have underlaid the deepening of the China-Russia relationship since 2001 when the two signed their Neighborly Friendship and Cooperation Agreement. Yet before 2019, the China-Russia strategic partnership primarily focused on bilateral cooperation and activities to promote mutual trust and coordination. By contrast, the current relationship is described as “better than alliance,” “shoulder to shoulder,” or “back against back.” It essentially goes beyond bilateral cooperation and focuses on joint posturing in global arenas and coordinated positions on each other’s security concerns. What explains this change in the nature of the China-Russia relationship?

Two recent developments, namely the simultaneous deteriorations in China’s relationships with states in the Indo-Pacific and Europe, have precipitated Beijing’s readiness to upgrade China-Russia relations. First, in the Indo-Pacific, building on the Trump administration’s efforts, Biden’s first year has made great accomplishments. It solidified the scope and depth of cooperation in the Quadrilateral Security Dialogue between the United States, Japan, Australia, and India, incorporating economic, technological, and health-related aspects to the agreement as well as expanding linkages with South Korea and the European Union. Militarily, the Biden administration pushed for the Taiwan Strait to be covered by the Quad’s security concerns, weakening the long-held “strategic ambiguity” over Taiwan. Meanwhile, the further development of nuclear submarines by AUKUS—Australia, the United Kingdom, and the United States—poses a threat to China.

Second, Biden’s skillful diplomacy has also drawn European powers closer to Washington’s strategic preferences regarding China. The EU has openly declared China “a systemic rival” and intensified its coverage and criticism of China’s policies in Hong Kong, Tibet, and Xinjiang. In March 2021, the EU adopted its first sanction against China in thirty years, targeting four Chinese officials and the Xinjiang Production and Construction Corps Public Security Bureau under accusations of human rights abuses. Beijing quickly retaliated with its own measures, fueling more anti-China backlash in Europe. In September 2021, the European Parliament published the New Europe-China Strategic Report, declaring a more “confident, all-around, and coordinated strategy toward China and rebuilding a relationship with EU values.” The EU then reinforced a high-level dialogue on China and created the Trade and Technology Council to lead values-based global digital transformation. These European actions, on their own, are apparently traditional and apparently reasonable. Yet, in the backdrop of intense U.S-China rivalry, they have exacerbated China’s fear of strategic encirclement. In response, Foreign Minister Wang Yi criticized the EU’s positions on China as self-contradictory and mutually undercutting. In short, at the end of 2021, China felt cornered, insecure, and unable to drive a wedge in the North Atlantic alliance and prevent potential blockages in trade with the EU, jeopardizing China’s aspirations to modernize its domestic economy and expand global trade.

As the United States strengthened alliances against China, Beijing pursued so-called “New-Type Big Power Relations,” underscoring sovereignty, cooperation, and respect for the UN system, and called this type of relationship a “partnership without alliance-making.” The only “big power” that shares China’s policy preferences is Russia. Militarily, China and Russia’s insecurity and strategic objectives deeply aligned after the United States withdrew from the Intermediate-Range Nuclear Forces Treaty and the Arms Trade Treaty in 2019. Russia, concerned about NATO expansion and missile deployment close to its borders, found similar concerns with China, who felt threatened in maritime Asia and by U.S. strategic positioning in the Taiwan Strait. In June 2021, Beijing and Moscow jointly announced that “some countries use ideology to separate nations and interfere into others’ domestic affairs, customarily adopt one-sided sanctions, and destroy multilateral international systems, including those on military controls. China and Russia will continue to follow the Non-Proliferation Treaty obligations to defend international peace and security.” At the China-Russia Leaders’ Summit in December 2021, President Xi Jinping emphasized that the two countries will coordinate and support each other in international affairs, offer solutions to global governance in pandemic control and climate change, and resolutely resist “bullying” and a “Cold War” mentality cloaked by “multilateralism” or “rules.”

On February 4, 2022, Xi and Putin jointly announced the rather lengthy Joint Statement on New Era International Relations and Sustainable Development. The declaration has three messages: first, both countries believe that “democracy is a shared value for mankind, not the intellectual property of a few countries.” Therefore, no country should use democracy to pressure others, interfere in domestic affairs, and create global divisions. Second, both countries believe in peace and development and strive to advance the construction of China’s Belt and Road Initiative and Russia’s Eurasian Economic Union. Third, both countries are concerned about severe security threats worldwide and pledge to uphold sovereignty and territorial integrity, opposing foreign interference.

The Joint Statement suggests that Beijing and Moscow formed this special relationship to counterbalance the U.S.-led alliance system on a global stage. This declaration, reversing China’s long tradition of stating only principles, explicitly states that Russia supports that Taiwan is part of China, opposes the United States’s Indo-Pacific Strategy that destabilizes the region, and is severely concerned about AUKUS, particularly the development of nuclear submarine programs in the region. Correspondingly, China understands and supports Russia’s proposal to establish a legally binding mechanism to ensure Europe’s long-term security. Both countries express concerns about the United States’s withdrawal from international military control treaties, the military buildup in Eurasian border areas, and the arms race in outer space.

What does the Joint Statement oblige China to do in the current Ukraine crisis? Some argue that Russia’s invasion of Ukraine puts Chinese leadership in a challenging position. Supporting Russia means violating Chinese-cherished principles of sovereignty and diplomacy to settle international disputes; not supporting Russia means losing credibility as a special ally of Russia as discussed in the Joint Statement. On the other hand, others believe that the Ukraine crisis strengthens China’s strategic hand, giving Beijing an important mediating role and increasing Moscow’s dependence on Beijing in the future. The Ukraine crisis has caused vehement debates within China, but the Chinese consensus on maintaining the close relationship with Russia remains. Beijing is accustomed to contradictory international obligations and practices, between sovereignty and “legitimate” strategic concerns, and between a preference for peace and the show of force. The Joint Statement also outlines Chinese preferences for conflict resolution: it cannot be decided by external hegemons but through talks involving concerned parties—it must follow the UN-anchored system as a guiding principle.

In March 2022, at the Two Sessions in Beijing, China’s Foreign Minister Wang Yi delivered China’s response to the Ukraine Crisis: China will do more to help resolve the crisis. China insists upon the UN Charter and principles, directs dialogues between disputing parties, and supports negotiations to create a sustainable regional security mechanism. On its relationship with Russia, Wang conveyed that China and Russia currently view each other as the most important neighbors and strategic partners within the international system. No matter how the situation evolves, the two countries will “continuously advance comprehensive strategic partnership of coordination during the new era.”

As Washington debates on China’s role in the Ukraine crisis, it is prudent to recognize that America’s rapid advance of the Indo-Pacific Strategy and the simultaneous deterioration in China-Europe ties have driven Beijing’s special partnership with Moscow. So in handling Russia’s ongoing invasion of Ukraine, should the United States take advantage of the situation and make it China’s war by association with Russia? Or should it be sensitive to Beijing’s insecurities and rebuild a collaborative partnership across the Pacific? The former option ensures a short-term win for the United States by pitting China’s image vis-à-vis world opinions. Yet it is unlikely to pressure or “shame” China to change its policy on Russia. Instead, it will rankle already highly anti-West sentiment in Chinese society. Above all, making China an enemy of the West in the wake of the Ukraine crisis will undoubtedly leave China feeling more isolated and insecure—a dangerous path that may lead to severe consequences.