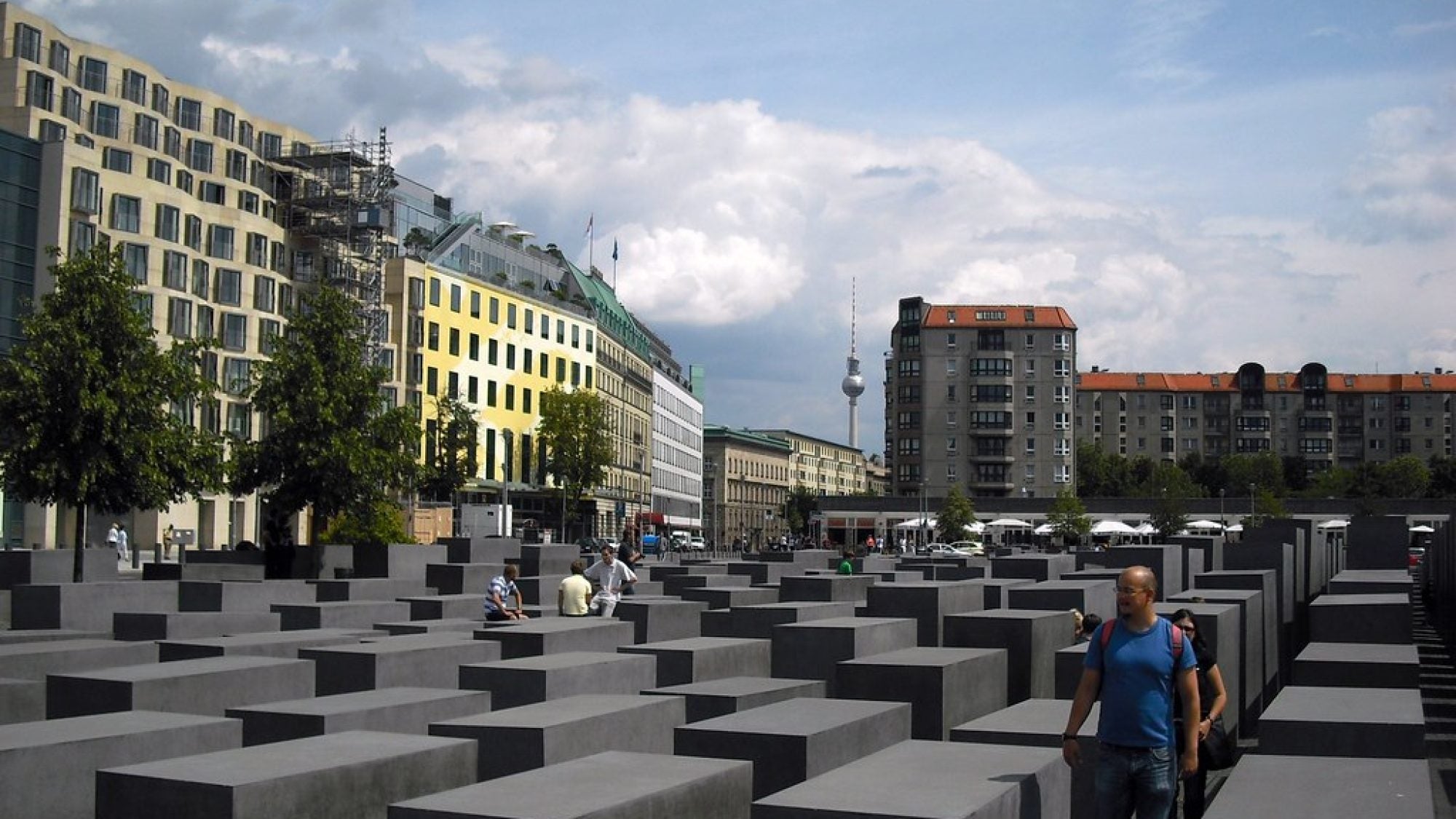 It is commonly assumed that Germany has successfully worked through its Nazi past in comparison to countries whose histories of colonialism and slavery endure into the present day. But this analysis is too simplistic and based more on how Germany presents its memory culture to the rest of the world rather than on the realities of contemporary German society. This article highlights the problems with Germany’s memory culture, particularly in terms of what it excludes, and argues that Germany’s approach to dealing with its Nazi past should not be used as a model for other countries that face difficult histories.

It is commonly assumed in the English–speaking world that Germany is the world leader when it comes to dealing with its past. There is even a word for it: Vergangenheitsbewältigung (“coming to terms with the past”). By contrast, Britain and the United States—to take just two examples—are still mired in apologetics for colonialism and ignorance about slavery. In her 2019 book Learning from the Germans, philosopher Susan Neiman makes a compelling case for Germany as a country that has successfully faced its Nazi past and argues that Western countries, and the United States in particular, would do well to emulate Germany’s example.

This article does not intend to repeat criticisms of Neiman’s book that have been made elsewhere; criticisms for instance include those of Thomas Laqueur, who argues that Germany and the United States’ pasts are too different for one to “learn” from the other. The article instead focuses on two questions: first, whether German memory culture needs to become more inclusive to reflect a more diverse society, and second, whether its success has created toxic byproducts, including an inability to criticize the state of Israel without being accused of antisemitism.

German Colonialism and its Absence in Memory Culture

While Germany has made significant efforts to “work through” its Nazi past, it has been less successful in confronting its colonial period (1884–1918), made more difficult by German memory culture’s prioritization of the Holocaust. A prime example of the side–lining of Germany’s colonial history is the lack of public discourse surrounding the 1904–1908 genocide of the Herero and Nama, where some eighty-thousand people died at the hands of German colonial forces. The German government only recognized the campaign as genocide in 2004 and it was not until May 2021, following protracted negotiations between the German and Namibian governments, that a reparations settlement was finally reached. This delay stemmed in part from German anxieties that reparations would detract from the Holocaust’s pre–eminence and give the impression that the two genocides should be accorded a similar status. Politician Ruprecht Polenz, who served as Germany’s special envoy for the duration of the negotiations, angered representatives of the Herero and Nama in November 2016 when he asserted that the massacre could not be compared to the Holocaust.

The issue of Holocaust comparability has been a central component of recent debates. In his book, Multidirectional Memory, memory scholar Michael Rothberg argues that historical atrocities should not have to compete for public attention. Instead, Western societies should foster memory cultures that allow these different atrocities to co–exist in fruitful dialogue, establishing commonalities that can produce lessons for society as a whole. Though the book was well received in English–speaking communities, Rothberg was accused in Germany of trying to relativize, and thereby minimize, the memory of the Holocaust by analyzing it in relation to colonial violence and the Atlantic slave trade. Thomas Schmid, a journalist for conservative tabloid Die Welt, wrote that, following Rothberg’s logic, “the Holocaust would then only be a special case of colonialism, would be absorbed into it to a certain extent.”

Criticism of Israel and Antisemitism Allegations

The inextricable link between German memory culture and the interests of the state of Israel has, in recent years, created something of a toxic “cancel culture.” Chancellor Angela Merkel declared in 2008 that Israel’s security was an essential part of Germany’s Staatsraison (“reason for existing”)—a standpoint which was wholly determined by the Federal Republic of Germany’s struggle to reckon with its Nazi past after the Holocaust. Positive, albeit guilt–informed, relations with Israel were a core component of the Federal Republic’s identity and attempt to gain international legitimacy from 1952, when the two fledgling states agreed upon a wide–ranging reparations deal. Yet, in a carryover of antisemitic generalizing from the Nazi regime, the German federal government tended to view “Jewish interests” as homogeneous and synonymous with those of the state of Israel. This mentality has persisted into the present and, over time, has created a situation whereby German politicians and commentators consider any criticism of Israel to be antisemitic—a position that became more problematic as the Israeli government drifted rightward from the mid–1990s.

In a 2021 essay for Die Zeit, German–Jewish journalist Fabian Wolff depicts a state of affairs in which Jews in Germany who criticize Israel are frequently accused of antisemitism by non–Jewish Germans. According to Wolff, Germany’s Federal Commissioner for Antisemitism, Felix Klein, who is not Jewish, is a main perpetrator of this phenomenon. For example, in early 2020, Klein was instrumental in revoking Cameroonian philosopher Achille Mbembe’s invitation to deliver the keynote address at the Ruhrtriennale arts festival due to parallels Mbembe had drawn in his written work between Israel and apartheid–era South Africa. This form of “cancel culture” is dangerous, firstly, because it stifles debate, but also because of its disproportionate effect on people of color. As historian A. Dirk Moses and others have pointed out, this is because German society tends to view Germans with a so-called “migration background” (Migrationshintergrund) as inherently suspect and likely to hold antisemitic beliefs until they can be educated to conform to the country’s Holocaust–focused memory culture. As an example of this, in October 2021, German broadcaster WDR terminated the contract of German–Palestinian journalist Nemi El–Hassan after it was unearthed that she had attended a controversial anti-Zionist demonstration in 2014 and had recently liked posts by pro-Palestine group “Jewish Voice for Peace” on Instagram. Though ultimately unsuccessful, some 385 intellectuals and public figures—many of them Jewish—signed an open letter defending her, arguing that her effective cancellation by the German media set a dangerous precedent in which pro–Palestinian voices in Germany are automatically deemed antisemitic.

The problems with Germany’s memory culture go beyond its exclusion of historical crimes that are not the Holocaust. Germany still has deep–rooted problems with racism and antisemitism, which its much–vaunted “reckoning with the past” has done little to address. Recent high–profile attacks, such as the shootings in the German cities of Halle in 2019 and Hanau in 2020—targeting Jews and people of color respectively—alongside the meteoric rise of the far–right Alternative for Germany (AfD) party, suggest that Germany has done little to address present–day systems of oppression despite its extensive attempts to confront its Nazi past. This presents an obvious contradiction: a supposedly world–leading memory culture fails to address serious problems with racism and the far right in the present.

Even this circumscribed form of “coming to terms with the past” has not successfully been adopted within all segments of the population. It has left large groups—particularly in rural areas—untouched, or worse, resentful at what they perceive to be an attempt to deprecate Germany’s national pride. This is a sentiment from which the AfD has managed to gain extraordinary political capital, and is exemplified by AfD state leader Björn Höcke’s comment in 2017 that the Holocaust memorial in Berlin is a “monument to shame.” This serves as a reminder that, even as scholars and activists on the left call for German memory culture to become more inclusive, many on the right do not accept even the prevailing Holocaust­–focused memory culture, deeming any kind of “German guilt” narrative to be incompatible with their nationalistic beliefs.

Should the United States Seek to Emulate German Memory Culture?

If the United States should “learn from the Germans,” as Susan Neiman suggests, then what exactly should it be learning? While it would be unfair to dismiss Germany’s memory culture as a failure, the civic engagement it has produced is—as historian Mirjam Brusius points out—mostly limited to remembering Holocaust victims and seems not to extend to helping the living, or, in other words, those experiencing discrimination in the present.

As historian Jacob Eder shows, it was Ronald Reagan’s administration in the 1980s that first persuaded an initially reluctant West German government under Helmut Kohl that Germany would stand to benefit—in terms of its international reputation—from doing more to commemorate the Holocaust. Despite playing an important role in building contemporary German memory culture, however, it would be a mistake for the United States to now try to emulate this model. This is not because the Holocaust and slavery are fundamentally different types of atrocity, as Laqueur argues, but rather because Germany’s memory narrative is essentially unidirectional: it focuses on one atrocity at the expense of others. This is something the United States, with its pluralistic society, can ill afford to do. Indeed, it is something that an increasingly diverse Germany can no longer afford to do either. As important as slavery is as a foundational element of the United States’ history, the United States needs to remember more than just one difficult past. It needs a memory culture that can encompass an array of stories and voices.

A successful memory culture should be as effective at dealing with the problems of the present as it is at remembering the past. For this reason, it is difficult to recommend Germany’s memory culture—often associated with the platitudinous mantra “never again”—as anything more than a rough template for the United States’. While there are things we can “learn from the Germans,” these lessons have more to do with the practical implementation of policy (instituting mandatory school trips, for example) than with the content of the culture itself. Racial policies in the United States have endured for much longer than those of Nazi Germany, and as such their legacies are more tangible and pervasive. U.S. history has created structures of racism that are still in place, and it is the job of a memory culture to make citizens aware, firstly, that these structures exist, and secondly, that they should do something about them. Germany has such structures too, and it is important to recognize that these are not solely the product of twelve years of National Socialism. A memory culture which focuses only on this period is incapable of addressing racism and antisemitism in the present day. Germany’s memory culture—just like the United States’—therefore must include the longer history of European colonialism, its belief in white superiority, and its attendant subjugation of other peoples deemed inferior.

Joseph Cronin is lecturer in modern German history at Queen Mary University of London. He specialises in modern German, Jewish, and East European history, particularly Jewish life in Germany after the Holocaust, and on Jews who found refuge from Nazi persecution in South Asia. His most recent book is Russian-Speaking Jews in Germany’s Jewish Communities, 1990–2005 (2019). His twitter is @joseph_cronin.