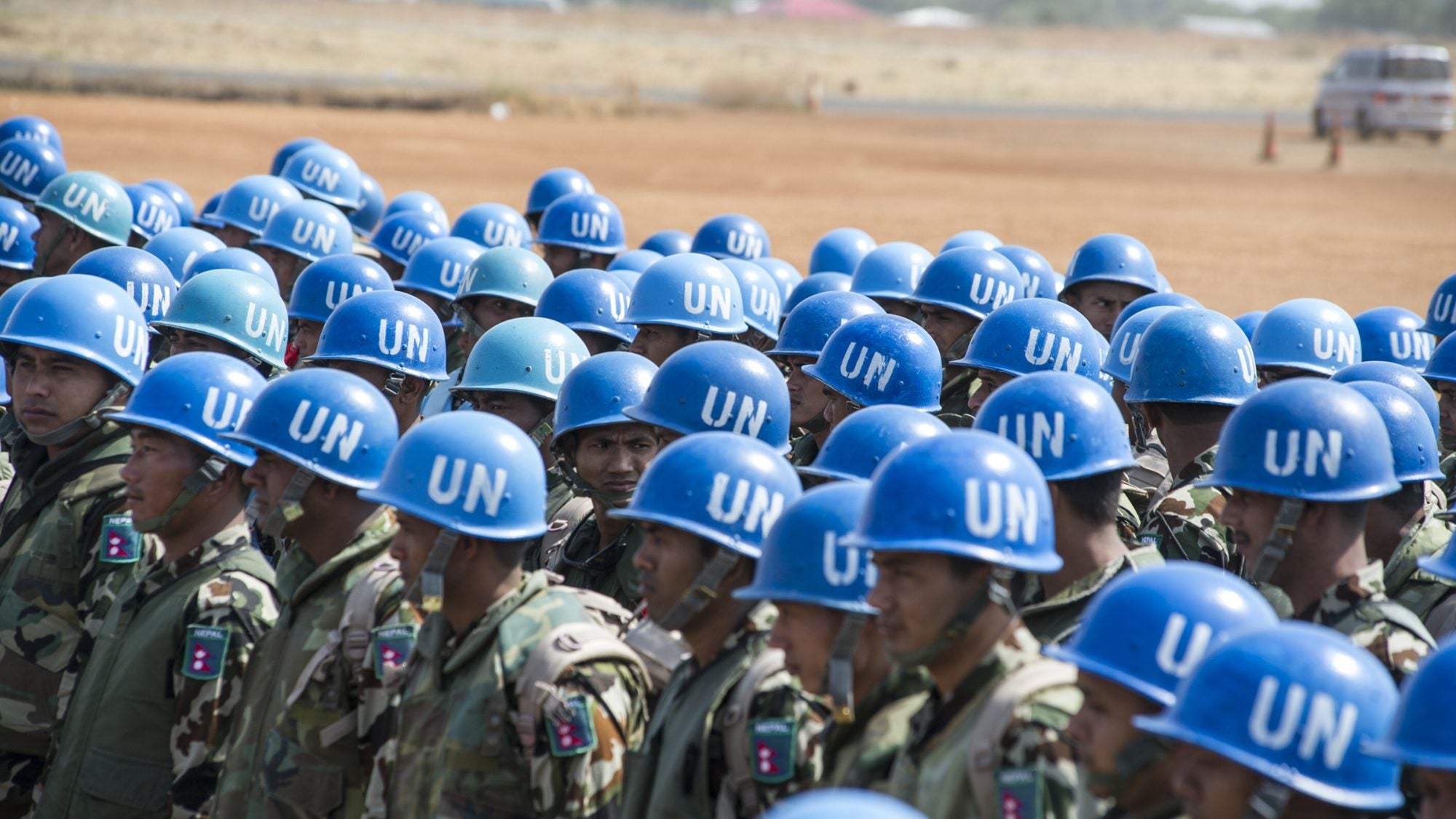 Sexual abuse and exploitation by UN peacekeepers is a persistent problem that the UN has struggled to eradicate. In 2021, the UN Secretary-General repatriated 450 Gabonese troops following credible complaints that troops sexually abused children while assigned to the UN’s peacekeeping mission in the Central African Republic. This latest scandal illustrates the limits of the UN’s response, which has treated peacekeeper abuse as a crime or disciplinary issue rather than an issue of gender inequality. Peacekeeper sexual abuse and exploitation (SEA) is part of a continuum of conflict-related gender violence that is rooted in structures of gender inequality. To adequately address SEA, the UN must shift its focus from punishment and discipline to the transformation of gendered structures of power in the host nation.

In September 2021, United Nations Secretary-General António Guterres ordered the repatriation of 450 Gabonese military troops serving in MINUSCA, the UN’s peacekeeping mission in the Central African Republic (CAR). MINUSCA had received credible allegations that Gabonese troops had engaged in sexual abuse and exploitation of children. This was not the first time, either. Since 2015, the UN received a total of 32 allegations of sexual abuse and exploitation committed by 81 Gabonese peacekeeping troops assigned to MINUSCA, six of which have been substantiated so far. The Secretary-General decided to repatriate the troops based on Gabon’s “demonstrated failure” to effectively investigate and respond to the allegations.

The repatriation of Gabonese troops illustrates the persistence of sexual abuse by peacekeepers in UN missions and the limits of the UN’s response. Peacekeeper sexual abuse and exploitation (SEA) has been documented across the globe, including in Bosnia, Somalia, Sri Lanka, Liberia, the Democratic Republic of the Congo, and Haiti. It has been perpetrated by UN civilian personnel, aid workers, and military troops from member nations serving in UN peacekeeping missions.

The UN has sought to address a culture of impunity that has failed to prevent or punish perpetrators, focusing on improving accountability and transparency. While repatriation is an important step in establishing zero tolerance for sexual abuse, it is not enough. The UN must seek to eradicate gender inequality, the root cause of sexual abuse and exploitation.

Condemned by former Secretary-General Ban Ki-Moon as a “cancer” in the UN system, peacekeeper abuse harms victims, who are often children, and undermines UN peacekeeping missions. Survivors, mostly women and girls, often experience physical and emotional harm, including risk of sexually transmitted diseases, forced pregnancies, trauma, and depression. The harm is frequently exacerbated by local communities, where traditional gender norms may stigmatize and shame victims. This results in social ostracism, economic hardship, and poverty for survivors and their families. Peacekeeper SEA can thus exacerbate existing gender inequalities in societies already devastated by conflict.

For over two decades, the UN has struggled to address sexual abuse and exploitation by peacekeepers. In 2002, the Office of the UN High Commissioner for Refugees and the Save the Children Fund reported allegations of abuse of children in refugee camps in Liberia, Guinea, and Sierra Leone by peacekeepers, aid workers, and NGO local staff. The UN’s Office of Internal Oversight Services (OIOS) documented the rape of girls and boys, as well as transactional sex, which included the exchange of sex with children for food and money. In response, UN Secretary-General Kofi Annan promulgated a bulletin in 2003, promoting a “zero tolerance” policy for sexual exploitation and abuse. Sexual abuse is defined as the “actual or threatened intrusion of a sexual nature, whether by force or under unequal or coercive conditions.” Sexual exploitation is “any actual or attempted abuse of a position of vulnerability, differential power, or trust for sexual purposes, including but not limited to profiting monetarily, socially or politically from the sexual exploitation of another.” The bulletin applies to all UN staff as well as non-UN entities and individuals working in cooperation with the UN.

Enforcement, however, is problematic. In what are called status–of–force agreements, the UN relies on troop–contributing countries (TCCs) to investigate and punish allegations of SEA committed by their troops in host nations. The TCC thus retains criminal jurisdiction over its military personnel for crimes committed in the host nation, making it extremely difficult for victims to seek redress. SEA is therefore rarely prosecuted, encouraging a culture of impunity.

Not surprisingly, SEA has continued despite the UN’s zero tolerance policy, triggering further proposals for reform that have failed to eradicate the problem. In 2004, for example, over 150 women accused UN peacekeepers in the Democratic Republic of Congo (DRC) of rape, sexual assault, forced prostitution, and sexual exploitation. The 2005 Zeid Report published by the UN found that peacekeepers engaged in prostitution and the exchange of sex for money, food, or jobs. The report recommended a comprehensive strategy to improve the accountability of perpetrators. The UN adopted many of the report’s recommendations, including the establishment of Conduct and Discipline Units at UN headquarters and in field offices.

Despite these reforms, however, peacekeeper SEA in the DRC and other places continued. Following allegations in 2014 that French peacekeeping troops in the CAR had sexually abused children, Secretary–General Ban Ki-Moon created an independent panel to review the UN response. The panel concluded that the UN response was “seriously flawed” and a “gross institutional failure.” A report by OIOS in 2015 found that SEA in peacekeeping missions occurred regularly and that UN assistance to victims was “severely deficient.”

In 2016, the Secretary–General took additional steps to address SEA, publishing the nationalities of peacekeepers alleged to have committed SEA and creating a trust fund for victim assistance, financed through voluntary contributions by member states. Following these actions, the UN Security Council adopted Resolution 2272, which requests the repatriation of an entire unit if there is “credible evidence” of “widespread and systematic” abuse, or if the TCC does not appropriately investigate or prosecute SEA perpetrators. It also urges TCCs to provide adequate pre-deployment training and screening to prevent SEA.

Upon taking office in 2017, UN Secretary­-General Antonio Guterres announced a “new approach” to SEA that seeks to focus on victims. In a 2017 report, he acknowledged that “unequal gender relations lie at the heart of sexual exploitation and abuse.” The report announced the creation of victims’ rights advocates as part of a victim-centered approach.  While it included steps to improve the reporting and investigation of abuse, it did not offer specific strategies to promote women’s social, economic, or political equality.

As the 2021 repatriation of Gabonese peacekeepers illustrates, peacekeeper SEA persists despite these reforms. In 2021, complaints of UN personnel SEA rose to 445, the highest since 2016. Of these complaints, 75 were lodged against peacekeeping personnel.

Gender Inequality: The Root of the Problem

The repatriation of Gabonese troops does not address the pressing needs of SEA victims, nor the gendered inequalities that give rise to peacekeeper abuse. Peacekeeper SEA does not occur in a vacuum; it is part of a continuum of conflict-related gender violence that is rooted in, reflects, and perpetuates structures of gender inequality in societies devastated by war. Conflict exacerbates existing gender inequalities, often leaving women destitute, displaced, and vulnerable to gendered violence and exploitation. For women unable to earn income, transactional sex may be essential for survival. A 2016 study showed that more than half of women aged 18-35 in Monrovia, Liberia engaged in transactional sex, more than 75 percent of them with UN personnel.

Further, peacekeeping troops may be socialized in masculinized military cultures that devalue women and promote gender violence, which also contributes to peacekeeper SEA. Professors Karim and Beardsley, for example, have demonstrated that TCCs with better records of gender equality correlate with a lower incidence rate of SEA allegations.

Recognizing that SEA is rooted in gender inequality is an important first step to addressing the issue. In accordance with Security Council Resolution 1325, the UN must incorporate a gendered perspective to understand and effectively address post-conflict SEA.

Situating SEA within a gendered framework means shifting the focus from individual perpetrators to the wholesale transformation of gendered structures of power. The UN and its donors must invest more money to improve women’s legal, economic, and social position in post-conflict communities. Reconstruction offers opportunities to promote women’s empowerment and eliminate structural barriers to gender equality. As Resolution 1325 recognizes, the participation of host-country women is essential to create effective empowerment initiatives and strategies to detect and prevent SEA. Additionally, more resources must be allocated to women’s economic and political empowerment, reducing their vulnerability to gender violence, as projects related to gender equality remain underfunded. The Secretary-General in 2020 reported that “the international community’s support to women is focused on microenterprises and microcredit, while large-scale reconstruction after conflict is dominated by men and overwhelmingly benefits men.”

Providing reparations for survivors must also be a priority. SEA violates the human rights of survivors, causing physical, emotional, and economic harm. In Haiti, for example, women impregnated by UN peacekeepers have often been left without any means of economic support, perpetuating a gendered cycle of poverty. The UN currently relies on voluntary donations to fund victim assistance. More resources are needed to repair the damage to survivors inflicted by those tasked with protecting them.

Lastly, the UN and TCCs must identify and encourage particular military and peacekeeping practices that decrease SEA. More research is needed to identify organizational practices and cultures that promote gender equality and discourage gender violence.

Valorie K. Vojdik is the Waller Lansden Distinguished Professor of Law at the University of Tennessee College of Law. Her scholarship focuses on gender and the law, including gender violence, international women’s rights, feminist jurisprudence, and masculinities theory.

It is commonly assumed that Germany has successfully worked through its Nazi past in comparison to countries whose histories of colonialism and slavery endure into the present day. But this…