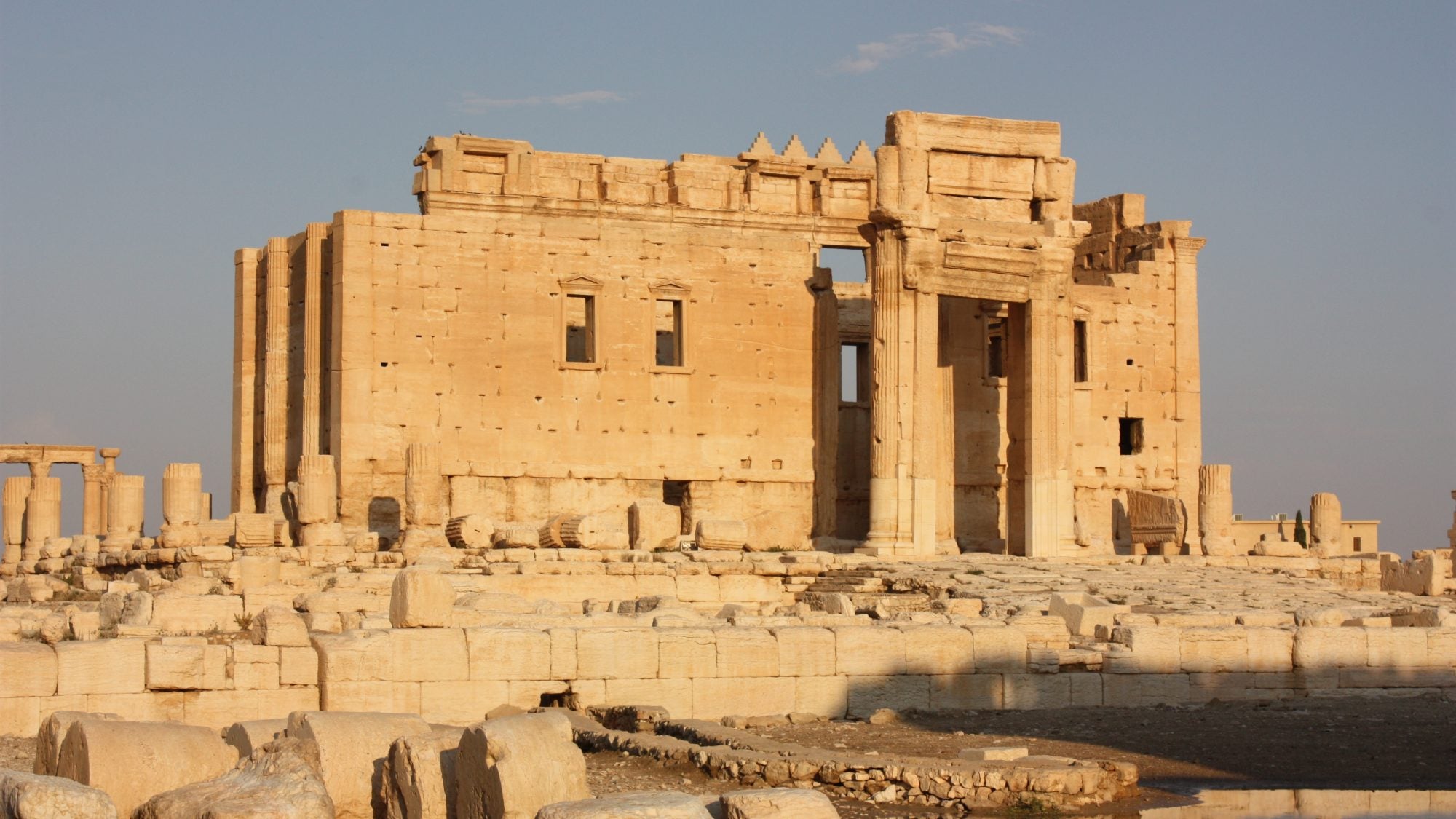 Despite assumptions to the contrary, the preservation of culture is possible in a conflict. Prior successful initiatives point to three interventions that the international community can support: (1) implementation of rapid emergency plans; (2) temporary supplemental funding for continuity in the cultural sector; and (3) resettlement for at-risk cultural workers. Additional private partnerships are needed to share expertise, support effective local responses, and supplement scarce intergovernmental organization and governmental funds.

In times of war, cultural heritage is often viewed as a tragic casualty. Recent conflicts have seen significant cultural losses perpetrated by state and non-state actors. The number of impacted sites in Ukraine is growing by the day as experts in the country, academia, and international organizations sift through satellite images, sensor data, and on-the-ground reports of Russian damage from this year’s invasion. Given these trends, what can be done to protect cultural heritage in conflict?

First, many of the interventions for protecting cultural heritage during a conflict rely on significant planning and timely intervention. Immovable objects such as historic buildings, monuments, and statuary must be sheltered in place behind sandbags or brick walls to minimize blast damage. Moveable objects such as museum collections must be inventoried and secured from potential harm. Sometimes, they must be hidden from view or carefully relocated to safer locations. Emergency plans for safeguarding cultural heritage have enabled cultural workers to safely evacuate museum collections during the Second World War and to shelter collections in place in Syria and Iraq as well as in Afghanistan.

Among practitioners, the International Centre for the Study of the Preservation and Restoration of Cultural Property (ICCROM)’s First Aid to Cultural Heritage in Times of Crisis Handbook is the comprehensive guide for cultural workers seeking to improve emergency plans within their institutions or to implement a coordinated cultural first aid effort. These activities often require little money, but they do require knowledge on basic safeguarding measures, the political ability to carry them out, and, perhaps most critically, enough time to see through their implementation. There is no replacement for preparation. Yet, time and again, governments are reluctant to close museums, move collections, or sandbag public buildings and monuments in the critical period before a conflict begins. Such preparation is often deemed defeatist or viewed as harmful to public morale by governments ahead of a crisis. For these reasons, cultural workers often have very little ability to implement their emergency management plans. The emergency measures implemented are those that can be undertaken in the time it takes for the frontline to reach a cultural site. In practice, cultural workers must triage the collections in their care, prioritizing what can be protected and identifying what would be an acceptable, if unfortunate, loss.

Second, as blitzkriegs give way to stalemates and sieges, even the best emergency measures may not be sufficient. Explosive blasts can break through sandbags guarding the walls of historic buildings and shatter through museum crates. What is more, this kind of damage may not be collateral. Rather, cultural sites and repositories may themselves be the intended targets. While international humanitarian law, such as the 1954 Hague Convention for the Protection of Cultural Property in the Event of Armed Conflict, protects cultural sites and repositories except in limited cases of military necessity, conflict belligerents have adopted cultural targeting as a weapon of war. This pattern of targeting is well-established in Georgia, Syria, Iraq, and Afghanistan. In Ukraine, the Virginia Museum of Natural History’s Cultural Heritage Monitoring Laboratory has detected 191 potential impacts to archaeological sites, art centers, monuments, memorials, museums, and places of worship. From the perverse point of view of those who intend to harm civilians, cultural targeting demonstrates an intention to disrupt civilian life, undermines potential identity claims, and erases the physical evidence of a community’s historic presence. The recent invasion of Ukraine is a reminder of how cultural heritage is targeted. Since 2014, Russia has undermined Ukrainian culture and nationhood and employed cultural heritage to advance irredentist claims.

Some measure of structural support is essential for the cultural sector to counteract these threats. Between periods of active conflict, cultural workers may find opportunities to stabilize buildings and to salvage damaged collections. However, war is likely to disrupt economies, access to funding, and regular staff salaries. In many cases, cultural workers will feel a duty to stay with collections even when the situation is no longer safe. Sustaining cultural workers through remote stipends, fellowships, or long-term capacity-building initiatives helps to ensure sectoral continuity while providing a livelihood for their families. Regular support also discourages excessive risk-taking by reducing the likelihood that cultural workers would feel compelled to place their lives in harm’s way to be paid for a special project. Such support requires strong collaborative partnerships between cultural workers on the ground and organized consortia of international cultural institutions willing to adopt a long-term view.

Other issues emerge as conflicts drag on. War and political instability create unfortunate opportunities for the theft of art and cultural objects as well as the pillage of archaeological sites. Nazi Germany’s sanctioned looting from museums and Jewish families during the Second World War still creates challenges for restitution to this day. Cultural workers must be attentive to theft and to assemble the primary source documents that will assist in recovering missing collections in the years and decades ahead. With reports now emerging about the widespread theft of museum collections by Russian forces in occupied Ukraine, establishing baseline evidence has become especially crucial in this conflict.

As the cultural sector turns to early recovery following a conflict, documentation of the damage is necessary to demonstrate intentional targeting and evidence of theft. Post-conflict reconstruction of the cultural sector is dominated by governments, and there is often a lack of funding in the international sector. More partners are crucial, especially international “friends” organizations, partnerships between cultural institutions to their counterparts in “sister cities,” and stronger university partnerships as a means of pooling limited resources and expertise for recovery.

Finally, resettlement may be required for cultural workers in a conflict. Cultural workers are not “first responders” concerned with the preservation of human lives and property. Instead, they are “second responders,” who assist in clean-up, the restoration of civilian infrastructure, and the return of social services. International humanitarian law treats cultural workers as neutral professionals, but these workers are exposed to increased risk due to cultural targeting. As keepers of collective memory, their work is at odds with wartime efforts to delegitimize cultural identity.

Recent wars have seen fatalities among cultural workers. In 1992, the National and University Library of Bosnia and Herzegovina lost librarian Aida Buturovic to sniper fire as she and her colleagues tried to rescue books from the flames. But it was the Syrian War that drew heightened attention to the risks involved. In 2015, ISIS executed archaeologist Khaled Al-Assad, the director of the Palmyra Museum for forty years. His colleagues from the Palmyra Museum fled to safety in Turkey, where they could be supported by international colleagues in the short-term. Yet, it was not possible to secure even temporary fellowship positions for them in museums, despite the unique documentation that they brought with them about the ancient city and their direct knowledge of ISIS’s activities.

Emergency relocation for at-risk cultural workers is logistically challenging. Despite the growing urgency of the matter, few organizations are dedicated to assisting the specialized legal issues involved in the relocation of cultural workers. The Artistic Freedom Initiative is among the few, and its Afghan Artists Protection Project has been instrumental in providing assistance to cultural workers who have experienced threats to their lives as a result of their professional work and affiliations. Karima Bennoune, the former UN Special Rapporteur for Cultural Rights, has called upon the international community to respond, arguing, “We must not wait until we are mourning the deaths of at-risk cultural heritage defenders to rally to their cause.” These risks are already clear in Ukraine. In 2018, separatist forces captured and tortured Olena Pekh, a museum worker. Additional advocacy is necessary to support cultural workers who have no choice but to resettle and remake their professional careers.

While the challenges facing cultural heritage in wartime are daunting, locally led efforts have had real success. In Syria, the Idleb Antiquities Center, led by Ayman Nabo, has worked to safeguard famous archaeological sites in the northeast from airstrikes, shelling, and disassembly. In Ukraine, we can now look to the efforts by the Heritage Emergency Response Initiative, led by Ihor Poshyvalio. The Prince Claus Fund’s Cultural Emergency Response Programme and the International Alliance for the Protection of Heritage in Conflict Areas have supported many emergency needs in Ukraine, but additional partnerships in the international community are necessary to support the cultural sector as conflicts worsen and safeguard the lives of those who keep our collective memory alive. Now more than ever, we owe it to our colleagues to look at active and emerging conflicts where cultural heritage may be targeted and to prepare.

Dr. Brian I. Daniels is the director of research and programs for the Penn Cultural Heritage Center at the University of Pennsylvania Museum of Archaeology and Anthropology. He also advises the Smithsonian Cultural Rescue Initiative and serves as the vice president for cultural heritage of the Archaeological Institute of America, vice president of the U.S. Committee of the Blue Shield, and secretary of the ICOM Disaster Resilient Museums International Committee.