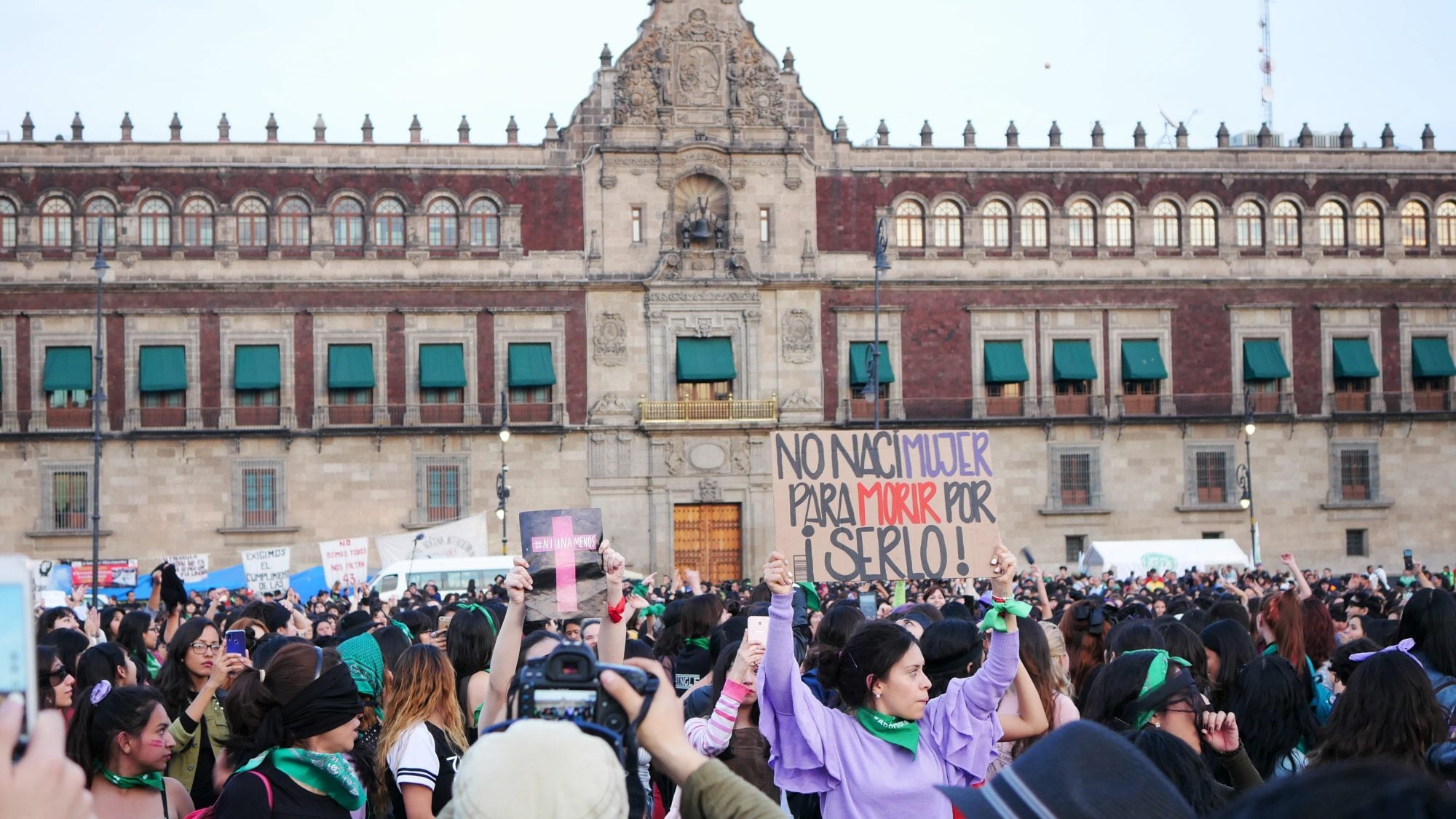 Title: “We are tired of being told it is not a big deal”: Institutional Machismo in Mexico

While violence impacts the lives of both men and women in Mexico, women are the ones who suffer from Mexico’s dominant male chauvinist ideology, legitimized and exacerbated by President López Obrador’s administration’s lack of interest in and limited resources for addressing gender-based violence. Institutionalized and normalized male chauvinism is what I refer to as “institutional machismo.” Within politics, the issue of feminicide is drowned out by the “war on drugs,” while the judicial system and the police deliberately criminalize feminist activists for mobilizing protestors against the government. Adequate and consistent financial support for preventive and protective programs for victims of gender-based violence, and the active participation of women in politics as co-producers of solutions, are critical to improving the position of women in Mexico.

On March 8th, 2022, 3,000 policewomen surrounded tens of thousands of feminist activists at the International Women’s Day march in Mexico City, which government officials, including President Andrés Manuel López Obrador and Secretary of the Government of Mexico City Martí Batres, warned would be “violent.” Instead of “generat[ing] violence” as the politicians anticipated, members of civil society organizations carried scarves, flags, and musical instruments as they sought to bring visibility to the phenomenon of gender-based violence and the urgent need for justice for its victims. Arussi Unda, one of the most influential feminist activists in Mexico, argued that women protested not just femicide, but also everyday violence against women and girls and the lack of governmental support. At another International Women’s Day march in Guadalajara, Jalisco, activists stated that  “we are tired of being told it is not a big deal.”

While multi-modal violence threatens all of Mexican society, women are particularly affected by gender-based violence. In 2021, the National Institute of Statistics and Geography (INEGI) reported that 70.3 percent of women feel at risk in their daily lives, and that 10.8 percent of the reported crimes against women are sexual. Under COVID-19 confinement measures, more women reported that they faced violence in the family environment compared to pre-lockdown statistics. Women continue to outnumber men in experiencing different types of domestic violence, including insults or humiliation, and threatened or actual expulsion from their home. Regarding criminal violence, 23.2 percent of female homicides occur in the home.

In 2020, the State of Mexico Attorney General’s Office reported 3,723 killings of women (at least 10 women killed every day), of which the police investigated only 940 cases as related to gender. These are known as “feminicides:” the killing of women both because they are females and because the state fails to investigate and punish perpetrators. Feminicide, rather than femicide, refers to the full set of facts that characterize the crimes against women to which the response of relevant authorities is one of silence and a failure to act to prevent and eradicate these crimes. Feminicide speaks to a fracture in the rule of law that favors impunity—the abandonment of cases due to a lack of resources, clear protocols, or personnel that results in the failure of prosecutors to investigate cases or identify perpetrators. According to a University of Puebla report, Mexico ranks fourth for the highest levels of impunity worldwide and is first in the Americas.

Each federal entity in Mexico has its own standard for what it considers feminicide. For example, Article 325 of the Federal Criminal Code of Mexico identifies gender-based violence as including the victim showing signs of sexual violence and the body of the victim being publicly exposed or exhibited. Many cases, however, are not counted as gender-based violence, but are instead associated with the endemic violence related to the ongoing armed conflict between state forces and organized criminals throughout the country, also known as the “war on drugs.” The government frequently presents the killing of women as a consequence of this conflict, which legitimizes the power of the male-led police, military, and judicial system over women.

This male chauvinist ideology, which is a form of institutional machismo, devalues women in society, intentionally ignores critical women’s issues (like gender-based violence), silences discussions on the authorities’ inefficient management of cases of violence against women, and justifies violent police protocols against feminist marches. It additionally exacerbates existing machista ideology that promotes negative stereotypes about women as sexual objects and cheap labor from which men should benefit.

President López Obrador took office in 2018 with the promise of eliminating entrenched corruption and leading a “Fourth Transformation for Mexico” through constitutional reforms to challenge the advance of neoliberalism, structural poverty, and increasing violence. Specifically, López Obrador’s government has invested in fighting drug trafficking organizations throughout the country through the “war on drugs,” initiated by President Felipe Calderón in 2006. While the government has had little success in limiting drug production, use, and trafficking throughout Mexico, violence continues in a major institutional and human rights crisis.

Institutional machismo manifests in recent cuts to the already deficient legal support provided to at-risk women and victims of violence. For instance, during COVID-19, the government cancelled the federal budget allocated to the emergency government action plan, Gender Violence Alert Against Women, in target states with the highest rates of violence against women: Mexico State, Veracruz, Nuevo León, Mexico City, Puebla, and Jalisco. The Gender Violence Alert previously enabled intervention from state authorities, like the police and the judicial system, in assaults and murders of women. This budget cut contradicts the principles of the Spotlight Initiative: an investment plan of $7 million from the United Nations and European Union for the creation of programs against feminicide and gender violence in Mexico, to which the Gender Violence Alert belonged.

This sudden change has been detrimental for organizations that depend on state funding to run national programs countering violence against women. In April 2021, Mexico’s Housing for Indigenous and Afro-Descendant Women and National Network of Shelters for Women Victims of Violence denounced the suspension of state financial support. These organizations argued that, with these cuts, López Obrador’s administration is attempting to silence the phenomenon of gender-based violence and dissuade women from denouncing male violence. This suspension is particularly dangerous considering the Mexican National Survey on the Dynamics of Relationships in Households reports that the majority of female victims of physical or sexual violence in Mexico do not take their cases to court “out of fear,” “because they think it is not important,” “because of their children,” “because of shame,” “because they did not know they could report,” or “because they do not trust the authorities.”

Institutional machismo also manifests in López Obrador’s official statements on violence against women and the feminist movement. In May 2020, López Obrador questioned his own cabinet’s announcement that Mexico’s emergency call centers had processed more than 26,000 reports of violence against women in March 2020, the highest since the line was created, and suggested, with no evidence, that most of the calls from women to emergency call centers were fake. When activists rallied in September 2021, supporting the Supreme Court of Justice’s ruling that it is unconstitutional to criminalize abortion and demanding substantial changes in the government’s approach towards sexual violence in the Global Day of Action for legal and safe abortion, López Obrador referred to the feminist movement as a “conservative” movement that was created “two years ago” to weaken his political project. López Obrador’s comments show both the government’s contempt for women and a lack of knowledge of the issues that impact women the most.

Feminists  have become a leading “voice of the opposition” against López Obrador, claiming that the rule of law protecting women exists only on paper. They specifically protest the President’s support for Salgado Macedonio, Morena Party candidate for governor of the state of Guerrero, who faces five accusations of sexual abuse. Several organizations, like Frente por la Libertad de Expresión y Protesta Social and the Comisión Mexicana de Defensa y Promoción de Derechos Humanos, have also denounced the Mexican government before the Inter-American Commission on Human Rights (IACHR) for institutional machismo. These groups criticized López Obrador’s support of a “patriarchal and repressive regulatory framework” that criminalizes and abuses women activists, who are subject to illegal detentions and physical and sexual abuse by the police. Activists decry government and police stigmatization of feminists as violent, the restriction of women’s right of assembly, and the justification of threats and assaults against women. In short, feminists protest how institutional machismo, which rests in the lack of institutional engagement with women’s issues, exacerbates the hostility against women and feminist activists on the streets.

In order to engage with women activists and change its culture of institutional machismo, the Mexican government must restore the Gender Violence Alert Against Women and increase funding for specific programs countering gender-based violence, like Housing for Indigenous and Afro-Descendant Women and the National Network of Shelters for Women Victims of Violence.

To effectively address the challenges that women face in Mexico’s chauvinist and violent society, including the lack of engagement by local and national authorities with the issue of gender-based violence, it is also necessary to ensure women’s direct participation in prevention and protection programs. At the local and community levels, dialogue between victims, victims’ families, and other women is crucial to fostering solidarity and allowing victims to articulate their experiences so that they feel their testimonies are finally being heard and considered. At the national level, the testimonies and voices of women at risk, the victims of gender-based violence, and victims’ families need to be amplified in the media through programs such as the Programa Prevención y Atención a la Violencia, developed by the National Center for Gender Equality and Reproductive Health.

Hearing the testimonies of women at risk as well as those of the family members of murdered and disappeared women through various media platforms is necessary to bring awareness to gender-based violence and to highlight Mexico’s problem with feminicide and institutional machismo. Presenting these narratives would put pressure on López Obrador’s government and relevant authorities to address violence against women in Mexico as a central issue, not merely as collateral to the ongoing “war on drugs.” Moving women and the issues that impact them most, like gender-based violence, to the frontline of policy debates is an important step in challenging Mexico’s culture of impunity and institutional machismo and addressing Mexico’s human rights crisis of gender-based violence.

María López is a Reader in Sociology and Deputy Director of the Global Diversities and Inequalities Research Centre at London Metropolitan University. She is co-author of Gender Violence in Twenty-First-Century Latin American Women’s Writing (Boydell and Brewer, 2022) and is currently researching gender-based violence in Mexico.