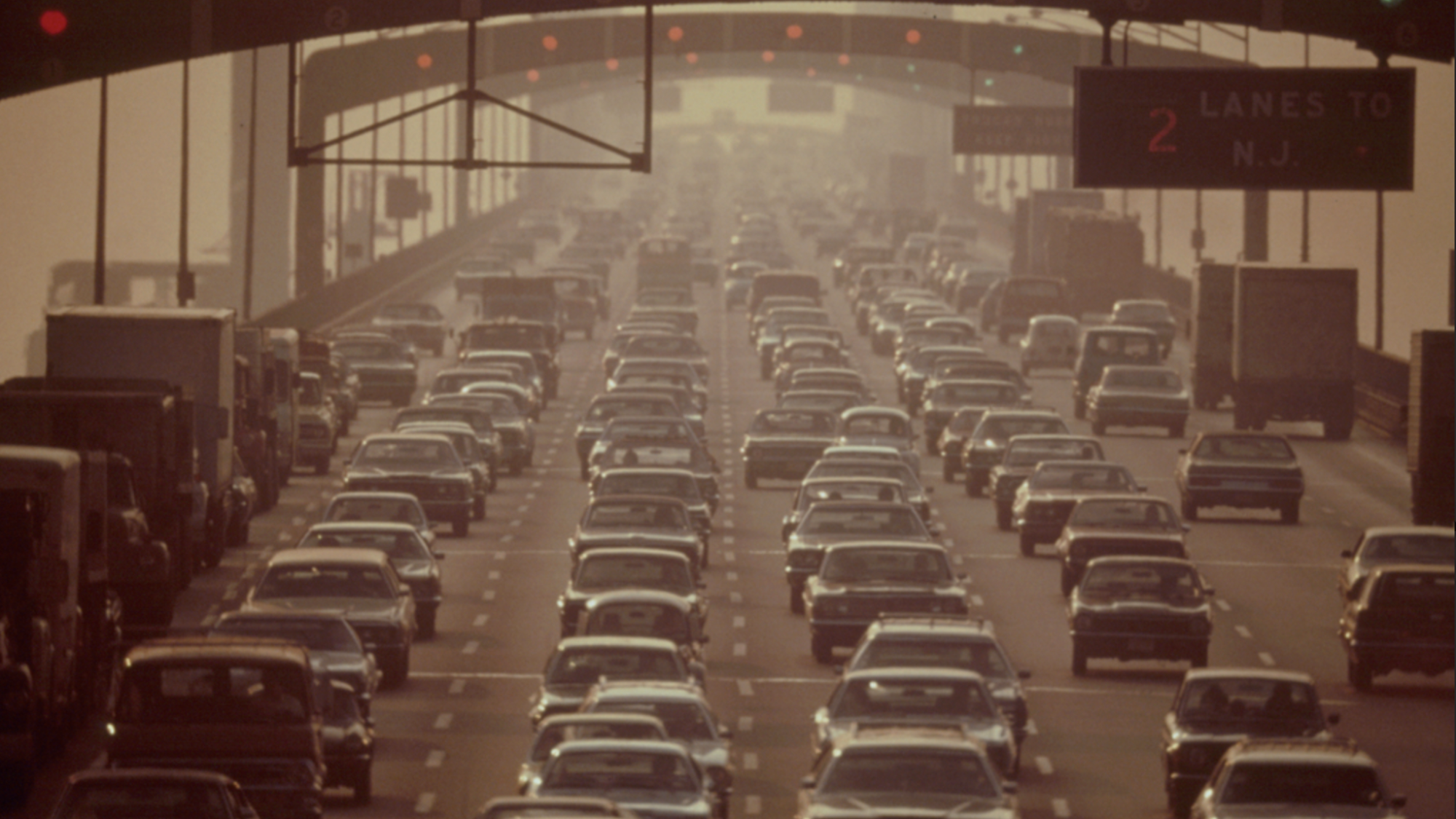 Title: Towards a National Strategy to Cut Gasoline Use

The United States needs a national strategy to cut gasoline use at speed and scale. This article outlines a path to achieve a 25 percent cut in U.S. gasoline consumption by 2030 by accelerating the transition to electric vehicles among the largest users of gasoline.

The Need for a Coordinated Strategy to Reduce Gasoline Consumption

Gasoline use in the United States pumps hundreds of billions of dollars into the treasuries of despotic regimes, burdens our pocketbooks, affects our health, and is the source of one-sixth of all U.S. carbon emissions. Our survival as a free and healthy people depends in significant part on our ability to rapidly wean ourselves off gasoline. Yet, we have made little progress so far—our annual gasoline consumption has been flat at about 140 billion gallons for the last 20 years, and we consume 30% more now than we did in the 1970s when Presidents Nixon, Ford, and Carter launched initiatives to curb gasoline use.

Neither the federal nor state governments have an aligned gasoline consumption reduction target or strategy. While the Biden administration set a target in April 2021 for a 50–52 percent reduction in overall U.S. greenhouse gas (GHG) emissions from all economic sectors by 2030, it did not set a gasoline reduction goal. Moreover, though many state governments have set GHG reduction goals, they do not specify the amount of gasoline cuts. These distant and broad GHG targets are ineffective in reducing gasoline consumption because they do not set measurable gasoline reduction goals, require a program to meet them, send a clear market signal, or require accountability.

To specifically address vehicle emissions, governments have fabricated a patchwork of uncoordinated and unmeasured policies connected to personal transportation, including electric vehicle (EV) purchase incentives, fuel economy standards, carbon taxes, bike lanes, sidewalk improvements, and mass transit projects. While all of these policies have merit, their relative impact on near-term (2030 and earlier) gasoline use varies enormously, and they do not collectively add up to a coherent, effective, or measurable strategy to cut gasoline use.

Instead, a national strategy is required to cut gasoline use and meet the overlapping geopolitical, environmental, equity, and gasoline affordability crises.

Cutting U.S. gasoline use by 25 percent by the end of the decade while maintaining mobility is an ambitious yet realistic national goal. Achieving this goal would require cutting annual gasoline use from its 2021 level of 135 billion gallons to a 2030 level of 100 billion gallons—a level not seen since the mid-1970s. This cut would reduce U.S. carbon emissions by roughly 270 million metric tons a year, roughly the annual amount emitted by the entire economy of Spain. The plan to achieve this 25 percent goal would require approximately 50 million EVs on U.S. roads by 2030, driven disproportionately by today’s larger gasoline users. 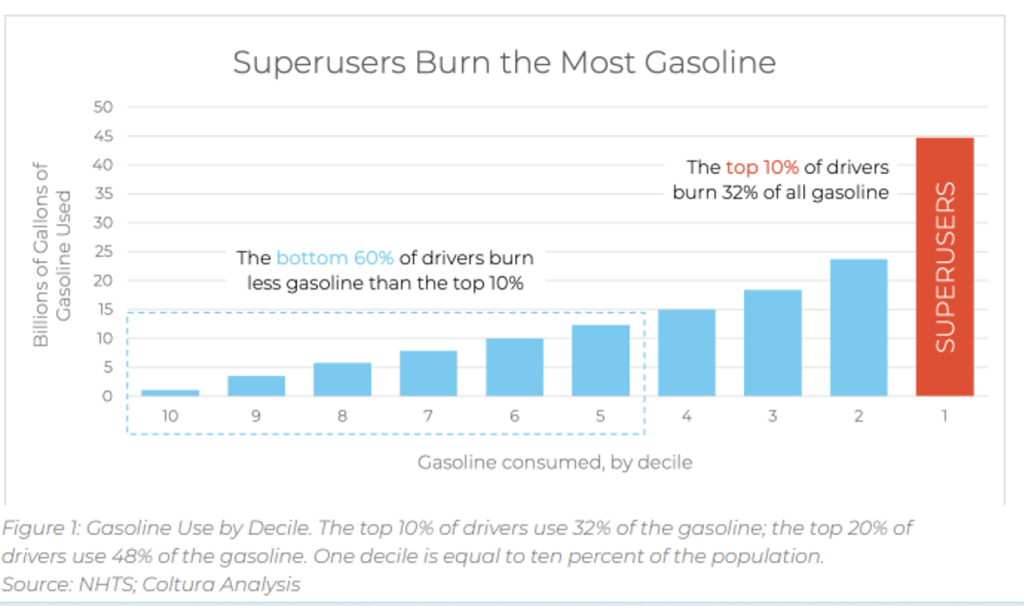 The top 10 percent of drivers by volume of gasoline consumed are known as “gasoline superusers.” Gasoline superusers account for roughly one-third of all gasoline usage, and the top 20 percent of gasoline users account for nearly half. A gasoline superuser uses upward of 1,000 gallons a year, compared to about 450 gallons a year for a driver in the 50th percentile. Superusers are presently on track to be the last to switch to EVs because they prefer to drive pickups and SUVs (electric models of which are only now entering the marketplace), and because they tend to reside in rural areas where EVs are less popular and charging infrastructure is less developed. EVs are most popular with coastal residents who tend to drive fewer miles than average.

Gasoline superusers are attractive targets for gasoline reduction because their transition to EVs results in 2 to 4 times more gasoline displacement compared to the average gasoline user. If the largest users of gasoline shift to EVs last, it would take 166 million vehicles to cut gasoline use by 25 percent. However, if the largest gasoline users convert to EVs first, only 26 million of America’s 253 million light duty vehicles would need to switch to EVs to achieve the same goal. Total new car production in the U.S. has averaged about 17 million in recent years. EV sales in the U.S. are expected to reach 670,000 vehicles in 2022, and there were roughly 1.6 million EVs on U.S. roads at the end of 2021.

Governments should provide additional gasoline displacement incentives to middle and lower income superusers to help offset the down payment on an EV and alleviate the heavy financial burden caused by gasoline expenditures.

The importance of targeting incentives is especially salient during the present period of EV shortages—the much-anticipated electric Ford F-150 presently has a three-year waiting list. In times of short supply, poorly targeted government incentives could end up undermining the potential for gasoline reduction by helping low gasoline users buy EVs that could otherwise be sold to superusers and displace much more gasoline.

A principal advantage of a superuser focused strategy is that it maximizes the redirection of money from oil companies to EV purchases. A gasoline superuser who drives 2,500 miles a month in an SUV and purchases 125 gallons of gasoline monthly at a gas price of $4.50 a gallon will spend $562 a month on gasoline. Assuming both that the replacement vehicle is an electric Hyundai Ioniq 5 and that electricity is priced at the U.S. average of 14 cents per kilowatt-hour, the driver will spend $80 per month on electric fueling and realize a net fuel savings of $482 per month. The EV will also save the driver an additional $100 per month on scheduled maintenance. The $582 a month saved by the superuser profiled above could be used to service $41,200 of debt, assuming a 5% interest rate and a seven-year loan term.

Combined with the gasoline displacement incentive and the value of the superuser’s trade-in vehicle, the cash flow from gasoline savings should, in most cases, be sufficient to purchase a new EV of similar size.

Governments should prioritize locations where superusers are concentrated for EV charging installation and grid upgrades. Superusers will require more electrical power to charge their vehicles, so superuser-rich areas may need additional investments.

Government fuel efficiency standards are presently set without regard to how much total gasoline all vehicles of a model type are likely to use. The standards should be adjusted to reflect a model’s predicted combined gasoline usage by all drivers. This type of weighted standard would incentivize automakers to make EVs likely to be purchased by the largest users of gasoline.

Many are concerned that there are insufficient raw materials for EVs to be produced at the required rates. The Biden administration recently took steps to ensure access to the necessary minerals, but more needs to be done to assure that production of sufficient numbers of EVs aren’t limited by mineral shortages.

Data supporting fine-grained analysis of U.S. gasoline consumption is currently locked away in state licensing records, automakers, and insurance companies. The federal and state governments and industry should unlock this data to both improve understanding as to the who, what, where, why, and how of gasoline use, and to measure which policy interventions are most effective in reducing gasoline use.

EVs offer a tool to end the gasoline dependence that has plagued U.S. foreign, domestic, and climate policy for five decades. Governments at all levels should maximize the ability of EVs to achieve gasoline savings by enacting data-driven policies prioritizing the largest users of gasoline.

Matthew Metz is the founder and co-executive director of Coltura. He was the lead advocate behind the passage in Washington State of a 2030 gasoline vehicle phaseout target law in 2022 and Zero Emissions Vehicle legislation in 2020. He writes about legal, political, and cultural strategies to transition off gasoline. Matthew has created performance and conceptual art works aimed at changing cultural perceptions of gasoline. Matthew earned a J.D. from UCLA Law School and an A.B. in Economics from the University of Chicago.

Janelle London is the co-executive director of Coltura. She is the author of a number of scholarly articles and reports about gasoline use and distribution, and wrote Sparky’s Electrifying Tale, an award-winning children’s storybook about the harms of gasoline. Janelle is a graduate of Stanford University and earned a J.D. from the University of California Berkeley Law School.