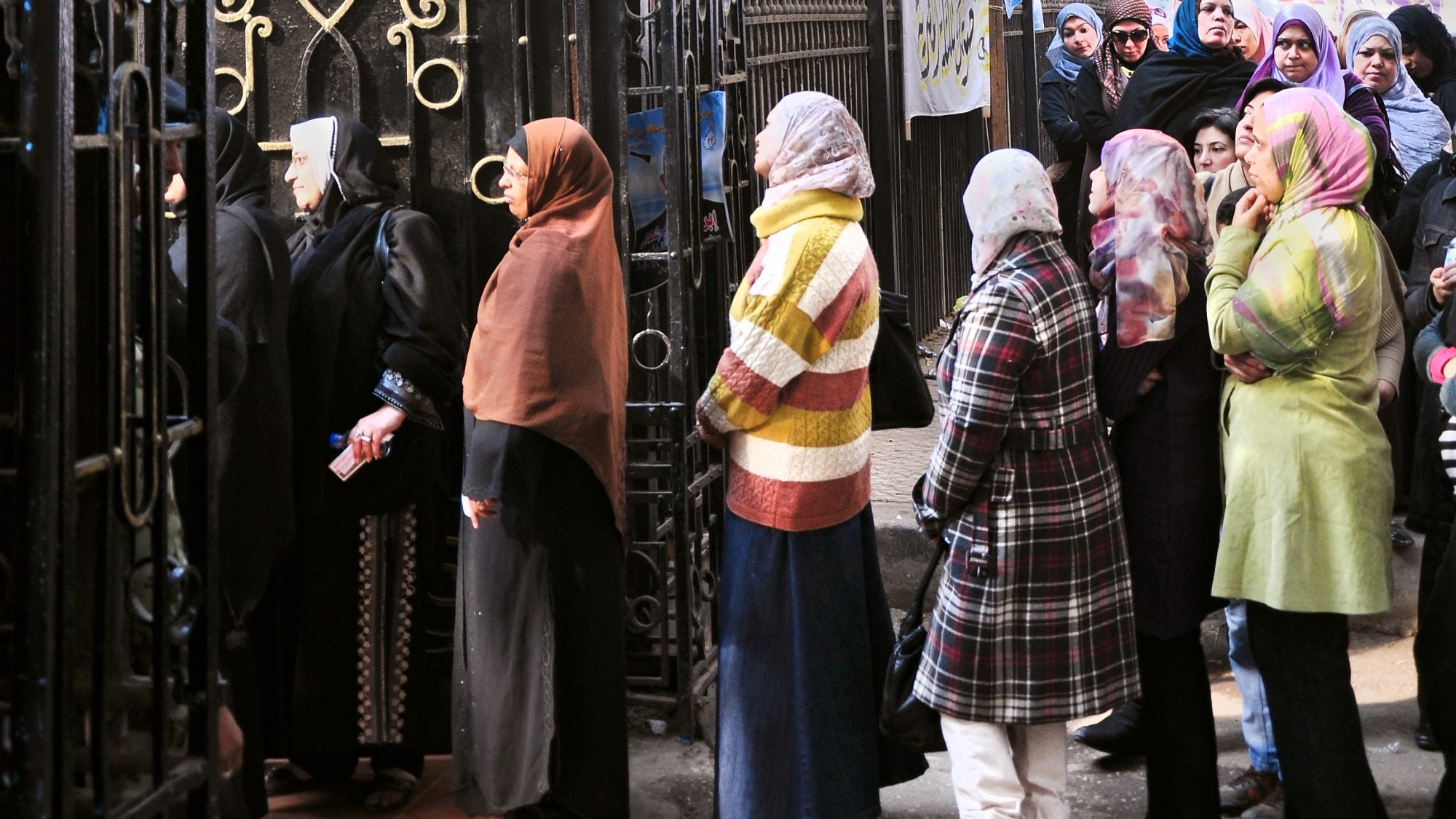 Over the past few decades, there has been intense competition between Islamists and the Egyptian state over who is the true representative of Islam. Since Anwar el-Sadat’s era, there have been confrontations between multiple actors over who has the authority to represent Egyptian women’s issues and how to best address them.

During Anwar el-Sadat’s regime, the lack of independent women’s organizations put women’s issues under the control of the state. Anwar el-Sadat strengthened the influence of middle-class women aligned with the regime in government and used them to justify his national and international agendas. He created women’s organizations supportive of the regime and expanded them at the advent of the UN Decade for Women in 1975.

The cooptation of women’s rights by the state continued throughout Hosni Mubarak’s regime. During this time, women were especially vulnerable to negotiations and disputes between Islamists and the ruling party. International pressure, especially from the U.S., to democratize, and internal pressure to Islamize shaped the political context in Egypt at the beginning of the twentieth century. Within Egypt, both Islamists and secular movements and parties still view religion as the main point of reference for women’s rights; they only differ in their interpretation and implementation of the texts. Therefore, the Egyptian government has used Islam and religious scholars to frame its gender reforms since the 1970s. This led to the emergence of Islamic feminism, which uses religious framing to promote women’s rights.

Islamic feminism emerged in the 1990s due to secular and religious women’s concerns about Islamist movements’ attempts to impose and promote a conservative interpretation of Islam. It aspires to challenge patriarchal interpretations of the Quran and hadith (the sayings of the prophet Muhammad) with more moderate interpretations to promote women’s equality in an Islamic context. Islamic feminists take a more progressive approach than the approach embraced by conservative clerics and dominant religious groups.

Islamic feminism has been effective at carving out more space for women’s participation in conservative religious cultures in the region. Deniz Kandiyoti describes these strategies as part of “patriarchal bargains,” pushing women to compromise to increase their security and advocate for more rights. Women in the Middle East and North Africa (MENA) have had to strategize in a way that takes into account the specific sociopolitical constraints they are operating within. Saba Mahmood has highlighted the importance of these compromises and showed how women could use social restrictions to ultimately facilitate their emancipation.

As some research on religious women’s organizing in the MENA shows, framing religiously women’s activism is essential for success in conservative societies. Women activists, especially women who utilize their religious knowledge and authority as a tactic for framing their demands for gender equality, can effectively create a bottom-up approach and open more space for women’s participation. Utilizing religious frameworks is particularly effective because the Quran, shari’a (Islamic law), and hadith, are used to justify patriarchal control of women and their bodies. In an experimental study, which addresses the influence of progressive reinterpretations of the Quran on public opinion about women’s role in public life in Egypt, researchers found that Islam can also be used as a tool for women’s empowerment.

One of the central issues Egyptian women’s rights activists focus on is the shari’a-based Personal Status Law (PSL), which regulates marriage, divorce, engagement, guardianship, and custody. PSL creates obstacles for women, as it gives men power over financial settlements in divorce, especially where children are concerned.

PSL has been at the center of debate on women and Islam in Egypt since Anwar el-Sadat’s era (1970-1981). Sadat initially attempted to appease the Islamists, represented by the Muslim Brotherhood, by releasing some of their members from prison. In 1971, he amended the constitution to include an article declaring shari’a as the main source of government legislation. This decision was an attempt to challenge his pro-Nasser opponents to consolidate his power. However, simultaneously, feminist organizations increased pressure on Sadat’s government to reform PSL. To counter the Islamist challenge for state authority against women’s agency, First Lady Jihan el-Sadat started a campaign to reform PSL. Eventually, in 1979, Presidential Decree no. 44 issued a new PSL. It included groundbreaking changes, such as granting women the right to judicial divorce due to their husbands’ second marriage. Mervat Hatem suggests the modification of PSL undermined the power and legitimacy of Islamists among women. Moreover, it helped the state mobilize domestic and international bases of support that set up an anti-Islamist bloc in a partnership with the state.

The Muslim Brotherhood and Al-Azhar opposed the new PSL law proposed by President Sadat because in their view it contradicted shari’a. The High Supreme Court annulled the law in 1985, because President Sadat had passed the law when the Parliament was not in session to avoid opposition from Islamist groups and others. The law was replaced with a weaker version in the same year, Law No. 100. For instance, women were no longer able to file for divorce because their husband married an additional wife.

Another reform of PSL occurred in 2000 under Hosni Mubarak’s regime. Like the reforms in the seventies, these reforms faced opposition from the Muslim Brotherhood, Al-Azhar, and various other entities. The PSL of 2000 granted women more rights, such as being able to unilaterally divorce their husbands (known as Khul’). It also aimed to speed up the divorce process when initiated by women. The introduction of Khul’ is considered to be a successful reform based on Islamic ijtihad. However, this progress was not without opposition from religious groups such as the Muslim Brotherhood, who argued a woman must only be permitted to pursue divorce with her husband’s consent.

PSL is still debated today. On April 13, 2022, Egyptian newspaper Al-Ahram reported that a new draft of the Personal Status Law submitted by House of Representatives member Nashwa al-Deeb has set new conditions for polygamy and second marriages. This draft comes after previous draft amendments were recalled for review last year, due to backlash from both women’s rights groups and Al-Azhar, the main center of Sunni religious learning in Egypt.

Amendments to PSL have always faced strong resistance from both conservative and secular forces in Egyptian society. Secular women’s groups in Egypt opposed the new government-proposed PSL because it has a provision that limited women’s rights to initiate divorce, known as khula’a, and obtain child custody. The Egyptian Centre for Women’s Rights released a press release rejecting the draft, stating that the proposed law “does not suit the current progressive times, as it is based on the most regressive and strict jurisprudential ideas.” On the other hand, Al-Azhar, one of the most important religious institutions in Egypt and the Islamic world, opposed a legislation in the proposed law that invalidates verbal divorces because it is contradictory to shari’a.

The state, caught between the two sides, must present any reforms as compliant with shari’a and endorsed by religious institutions, while simultaneously using reforms as a way to support the regime’s attempt to present itself as a champion of women’s rights. In a speech in September 2021, President Abdel-Fattah Al-Sisi stated that the new PSL must “reflect the culture of society while guaranteeing the rights of both men and women.”

Islamic feminists and scholars could be essential for utilizing the debates on PSL to improve the status of womenin Egypt and everywhere in the Muslim world. Family law requires religious women’s experts who are skilled in navigating interpretations of shari’a in a way which promotes women’s empowerment and helps compete with narratives from institutions such as Al-Azhar. Their ability to engage within rather than alienate localized cultural, historical, and religious narratives legitimize their push for women’s rights. Islamic feminists can effectively bargain with religious and state authorities because they understand local contexts and realities.

However, Islamist feminists in Sisi’s Egypt are wary of publicly engaging in debates with the government or religious institutions. They have been particularly affected by the crackdown on the Muslim Brotherhood due to public tendencies to connect their activism with the group. As a result, some of them either voluntarily paused their public activism or were forced to do so by the government.

To achieve any meaningful progress on women’s issues in Egypt, a feminist engagement with religious texts is necessary. Any unilateral attempt by the government to enforce reforms will be rejected by religious institutions and large sectors of society. Female religious scholars must be better represented in religious institutions, and more support for women to study and critically engage with religious texts must be provided—without fear of retribution from the government.

Dr. Anwar Mhajne is an Assistant Professor of Political Science and the Head Faculty Fellow for the Center for the Study of Race, Ethnicity, and Social Justice at Stonehill College. She also serves on the Academic Council of American Friends of Combatants for Peace. Her research strengths lie in the following areas: Feminist International Relations and Security Studies; Civil Society and Activism; Political Islam; Middle East; Gender Politics; and Social Movements. Her work has been featured in the Journal of Women, Politics & Policy, The International Feminist Journal of Politics, Political Research Quarterly, Religion and Politics, Culturico, The Carnegie Council for Ethics in International Affairs, Foreign Policy, The Conversation, Times of Israel, Haaretz, Middle East Eye, +972 Magazine, Quartz, The Defense Post, The Jerusalem Post, Carnegie Endowment for International Peace, Albawaba, the New Arab, and The National, among others.