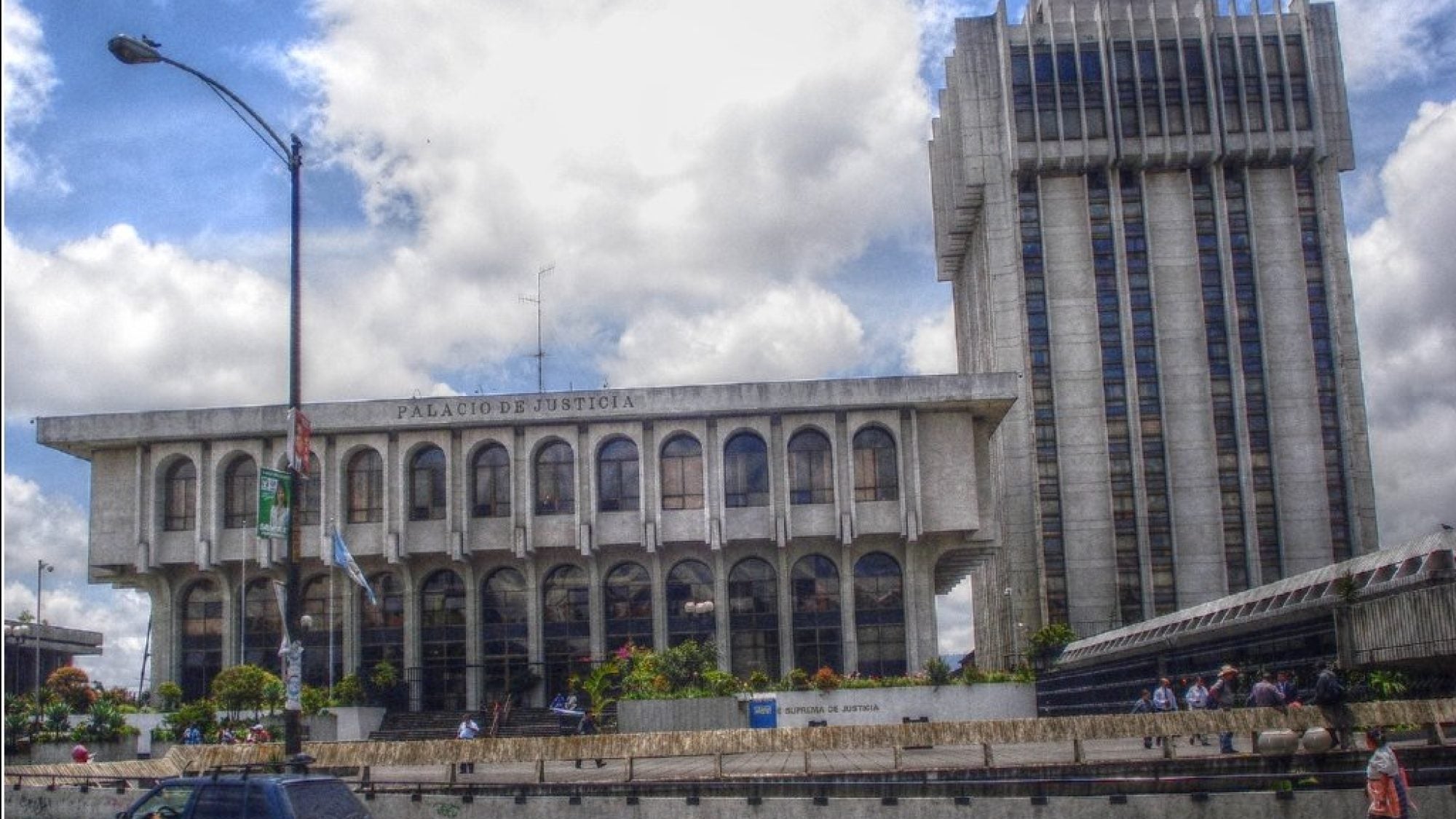 Title: A Guatemalan Judiciary Tailored for the Mafia Needs Reform

Reforming the country’s justice sector was one of the agreements of Guatemala’s 1996 Peace Accords, which ended one of the region’s longest-running internal conflicts. However, the country continues to be characterized by high levels of corruption and impunity. Influential factions and criminal groups undermine the independence of the judiciary and are opposed to any reform that could strengthen the judiciary and tackle corruption. The international community needs to help the people of Guatemala who want to live under the principles of the rule of law, such as respect for human rights and an independent judiciary.

In recent years, Guatemala has shifted from an incipient democracy to a kleptocracy, where the justice system is at the service of a criminal alliance between corrupt politicians, drug traffickers, organized crime, and powerful economic groups. For example, members of Congress, mayors, and even a vice president have had direct links to drug organizations or drug lords. Some of these individuals have spent time in U.S. federal prison for drug trafficking, as published in a 2019 report to Congress on narcotics, corruption, and illicit campaign finance. Likewise, the U.S. Department of State’s Bureau of International Narcotics and Law Enforcement Affairs (INL) recognizes that in Guatemala, in addition to drug traffickers, there are also networks involved in migrant smuggling, arms trafficking, human trafficking, money laundering, and extortion. To that list, INL must add large-scale corruption networks and mafia lawyers (known as “Abogansters”) that facilitate the theft of private property, houses, farms, and small businesses. The common denominator in these groups is judicial corruption—payments under the table to court officials or influence-peddling with appointees. All those criminal activities can only flourish in a society where institutions are corrupt. With over 97 percent of crimes going unpunished, members of criminal networks are able to act with impunity, creating a hub and even a sanctuary for organized crime.

In September 2021, the U.S. State Department found that the current Attorney General of Guatemala, Consuelo Porras, obstructed criminal investigations into acts of corruption. She was subsequently added to the Undemocratic and Corrupt Actors List under section 353 of the United States–Northern Triangle Enhanced Engagement Act, known as the Engel list. However, she is not the only Guatemalan judicial official identified by the State Department for their unscrupulous actions. Other judges from the Supreme Court and the Constitutional Court have also been named by the U.S. government as corrupt officials and subsequently included on the Engel list, such as Blanca Stalling and Nester Vasquez, among others.

The Chronology of Corruption

These high-level corrupt judicial officials were elected to key positions precisely because of their links with the criminals and corrupt politicians that control the electoral process. Their mission is to obstruct criminal investigations and grant impunity to white-collar criminals, corresponding to a well-structured plan designed by the criminal alliances to control the judicial system’s institutions. For decades, civil society organizations that fight for accountability have promoted actions to strengthen judicial institutions, and the international community has invested millions of dollars in initiatives to that aim. Those efforts are what criminals seek to destroy by making sure that the courts and the Office of the Attorney General are controlled by kleptocrats.

This institutional cooptation began in 2013, when a Guatemalan criminal court found dictator Rios Mont guilty of genocide. After this ruling, human right violators and criminal groups that benefit from impunity decided to take control of the judicial system.  The following year, two political parties whose leaders, former president Otto Pérez Molina and presidential candidate Manuel Baldizón, have been involved in drug trafficking and money laundering, elected the judges for the Supreme Court and the Courts of Appeal through a rigged process. This was carried out with the approval of a powerful group of businessmen who benefit from tax evasion, the exploitation of natural resources, and the preservation of poverty wages for workers, all over concerns raised by human rights organizations and institutions such as the Inter-American Commission on Human Rights and the UN Special Rapporteur for the Independence of Judges and Lawyers.

In 2014, as a Court of Appeals judge, I announced during the election of the Supreme Court that corrupt politicians were taking over the judiciary. After pressing charges against the head of Congress and the Vice President’s lawyer, I was forced to leave my country. I am not the only Guatemalan jurist in exile. In recent months, more than twenty-five judicial officials—judges, prosecutors, and lawyers—have had to leave Guatemala and seek refuge in the United States, Mexico, Costa Rica, and other countries. Among them is Judge Erika Aifan, a vanguard of the fight against corruption. She was recognized in 2021 by the U.S. Department of State with the International Women of Courage Award, along with anti-corruption prosecutor Juan Francisco Sandoval, who now is also in exile. Other jurists who worked for the special prosecutorial unit or the International Commission against Impunity in Guatemala (CICIG), such as Virginia Laparra, Leily Santizo and Siomara Sosa, still face false accusations and even imprisonment. Their supposed crimes were investigating or ruling against the “Predatory Elite,” who believe they are above accountability and do not want the rule of law to prevail. Past antagonism towards anti-corruption judges creates the precedent that anyone who challenges these influential people will suffer reprisals and threats.

The Impact of a Corrupt Judiciary

Guatemala’s long civil war has left a legacy of impunity, inequity, and violence. At the end of the twentieth century, the international community helped the government and the guerrillas reach a peace agreement. One of the accords, the Agreement on Strengthening Civil Power and the Role of the Army in a Democratic Society, acknowledged that the Guatemalan justice system was one of the most significant structural weaknesses of the state; it was ineffective and enabled corruption within institutions. Significant changes needed to be made to build a robust judicial system that could be efficient, impartial, and guarantee the independence and security of judges. The agreement established that the judicial system required extensive reform and modernization. However, over twenty-five years later, key legal reforms have yet to be achieved because of the lack of political will. Powerful actors that control the appointment of judges in higher courts do not want to promote the independence of the judiciary.

There have been moments of hope when it seemed possible to strengthen and modernize the judicial system. After signing the peace agreement in 1996, a generation of judges committed to the fight against impunity and the defense of judicial independence developed. To this end, in 2006 the International Commission Against Impunity (CICIG) was established by the United Nations to promote legal reform, build capacity in the special prosecutor’s office, and lead the investigation of grand corruption cases. Later, a citizens’ uprising led to the fall of President Otto Perez Molina and his cabinet. As thousands of Guatemalans demanded justice, political leaders were forced to support a dialogue with civil society for constitutional reform of the justice sector. Still, in the end, this effort also failed.

Since the end of the Guatemalan Civil War, various reform initiatives have been proposed, but all have ultimately stalled or failed due to a lack of consensus and political will. The result is a corrupt status quo in which the judicial system and officials are subject to the choices of political powers and criminal groups.

The modernization of the Guatemalan justice sector cannot be postponed any longer. The election of judicial officials should not depend on political decisions. Developing mechanisms to prevent external interference in the appointment or election of high officials to key justice institutions is paramount. Furthermore, creating a process that bases entry, transfer, promotion, and permanence solely on capacity, merit, and ethics is imperative to building trust in the justice system.

A change in how higher court judges and the Attorney General are elected will require constitutional reform. The current method of electing justice officials contradicts the Principle of Judicial Independence recognized in the United Nations Basic Principles on Judicial Independence. It is necessary to strengthen the process through which judicial officials—at all levels—are appointed, evaluated, and disciplined, to guarantee that all will act within a framework of ethics and professional excellence. Generally, there is a need to purge public employees who favor corruption or are incompetent in carrying out their jobs.

Modernization of Judicial Procedure and Jurisprudence

Inadequate judicial proceedings across the criminal, civil, and constitutional branches of the judiciary must also be rectified. Currently, the proceedings are complex, time-consuming, and facilitate corruption. This can be done through reform or modernization of current laws. More expeditious and transparent judicial processes are required to make influence-peddling difficult at all stages of judicial decision-making. Sanctions for those who enable or promote corruption must be strengthened.

It is naïve to expect that judicial reform will come from within a corrupt system. Without independent judges, Guatemala has become a kleptocracy with no checks and balances. Support from the international community will be needed to help Guatemalans who want to live under the rule of law. International organizations must demand the implementation of international standards of judicial independence. They could support the creation of a special commission to oversee the election of judges, similar to the one established in Ukraine. Such a commission could also promote international vetting procedures for high officials in the justice sector, such as those created in Albania, or articulate assets declarations to prevent conflicts of interest. Finally, the establishment of an International Anticorruption Court (IACC) could put kleptocrats behind bars using preexisting international institutions of justice.

Free trade agreements should also be used to promote the rule of law. The DR-CAFTA has a specific section in chapter eighteen for anti-corruption measures, which establishes that the parties have to eliminate bribery and corruption. The free trade agreement between the EU and Central America is based on good governance and the rule of law. The first article indicates that the parties reaffirm their commitment to good governance, especially the principles of the separation of powers, the independence of the judiciary, clear decision-making procedures by public authorities, transparent and accountable institutions, the efficient and transparent administration of public affairs at the local, regional and national levels, and the implementation of measures aimed at preventing and combating corruption.

Only when politicians and the centers of Guatemalan economic influence understand that no one is above the law will there be a real possibility of justice sector reform in Guatemala and hope for citizens that corruption and criminality can be curbed.

Claudia Escobar Mejía, PhD. is a former Guatemalan Judge and Legal Specialist on Judicial Corruption. She is a Distinguished Visiting Professor at the Shar School of Policy and Government’s Terrorism, Transnational Crime and Corruption Center (TraCCC) at George Mason University. She is also the Executive Director of Be Just.