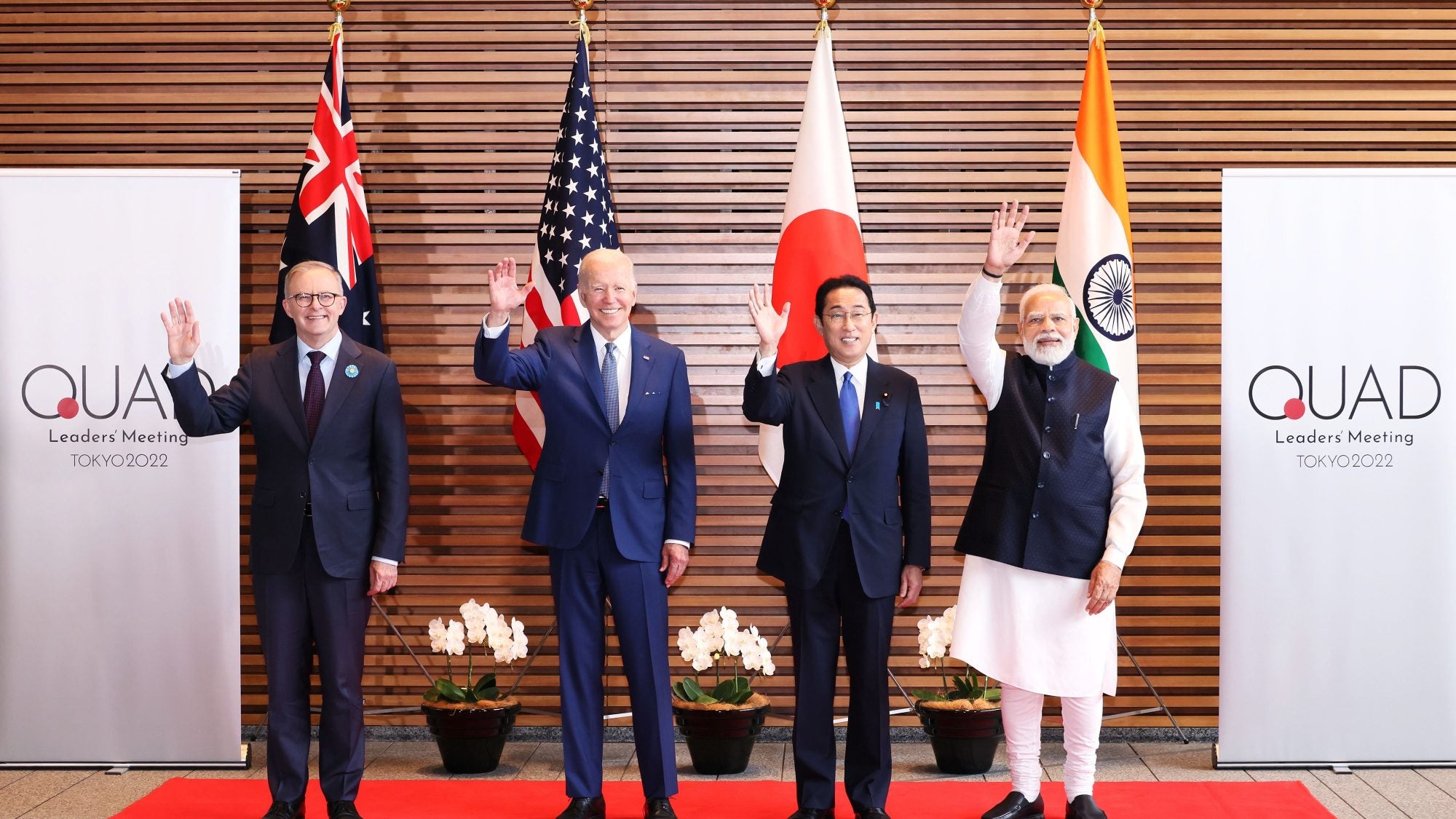 Title: Re-envisioning the “Fundamental Values” of a “Free and Open” Indo-Pacific

At the Quad Leaders’ summit in Tokyo, the leaders of the United States, Japan, Australia, and India re-affirmed their commitment to “a free and open Indo-Pacific” (FOIP) based on the “fundamental values” underpinning the US-led liberal international order—despite a lack of consensus on said values. By doing so, they missed an opportunity to engage with other regional actors and re-envision the Indo-Pacific as part of an emerging “post-western” international order.

The Quadrilateral Dialogue (“Quad”) Leaders’ Summit on May 24 in Tokyo heralds a new era in security in the Indo-Pacific, a region shaped by a desire to contain the People’s Republic of China (PRC) and shore up a declining Pax Americana. The Quad includes the United States, Japan, Australia, and India and was established in the aftermath of the devastating 2004 Indian Ocean tsunamis to coordinate disaster relief and humanitarian assistance. It has since become the leading regional partnership “dedicated to advancing a common vision of a free and open Indo-Pacific through practical cooperation on diverse 21st century challenges.” Leaders of each member country met in person in May to discuss security threats in the region and announce the establishment of the Indo-Pacific Economic Framework (IPEF). The framework, a maritime equivalent of the PRC’s “Belt and Road Initiative,” includes not only members of the Quad but also nine other Indo-Pacific economies representing 40 percent of global GDP. Although it stops short of being a free trade agreement, it signals a major strengthening of U.S. economic engagement in the region.

The focus in the previous Quad summit convened by President Biden in September last year had been on non-traditional security threats, particularly those posed by the COVID-19 pandemic. This time around, traditional security was firmly back on the agenda. In particular, the Quad sought to send a clear message to the PRC that attempts to change the status quo in the Indo-Pacific by force would be resisted. By raising the specter of possible PRC military action in the straits of Taiwan or the East and South China seas, President Biden drew attention to the actions of Beijing’s friend with “no limits,” Russia, in Ukraine. Biden asserted that Russia must pay a price for its invasion in Europe in order to deter challenges to the regional order in Asia (e.g., an attack by the PRC on Taiwan). However, the Russian invasion of Ukraine revealed splits between Washington, Canberra, and Tokyo on one side, and New Delhi on the other. India, an emerging Asian superpower, abstained from the UN General Assembly’s Resolution condemning the Russian invasion, which had been agreed to by the other three members of the Quad. India continues to maintain good relations with Russia after the collapse of the USSR and depends upon it for military imports which may explain its reluctance to publicly condemn its invasion of Ukraine.

Meanwhile, Japan, the second largest economy in the region (third in the world), sided with the United States vis-à-vis Ukraine despite its interest in amicably resolving a territorial dispute with Moscow in the Kurile islands, a legacy of the Second World War. This move by Tokyo gives the impression that it remains a US “client state” when it comes to security. It remains to be seen whether the summit will heal the rifts between the members, in the same way the invasion of Ukraine galvanized the transatlantic alliance between Washington and its European partners, or if it will further expose the divisions rooted in the different security interests, and, indeed, the values of the members of the Quad.

A commitment to common values is at the center of the alliance: the members of the Quad share “fundamental values and are committed to strengthening a free and open international order based on the rule of law.” However, they have differing interpretations of what these values are, shaped in part by their differing security interests but also by their historical experiences, and political and geo-cultural orientations. For the United States, a “free and open Indo-Pacific” (FOIP) is a logical corollary of a post-war commitment to a liberal world order which has guaranteed regional peace and stability for decades, laying the preconditions for unparalleled—if uneven—economic growth. There existed fears that U.S. support for this order had ended with the election of President Trump and his administration’s retreat from multilateralism. Yet, the Trump administration developed its own FOIP strategy in 2019, which the Biden Administration revised earlier this year. Although committed to working with its partners in the Quad, the strategy envisages continued U.S. leadership of the region (despite the withdrawal of U.S. troops in Afghanistan) and a commitment to values which the Biden administration at least considers to be universal.

For the Asian members of the Quad, however, the FOIP is less about asserting and defending “universal” values and more pragmatic, as a means to counter the rise of the PRC as a regional hegemon. Japan, which first articulated the concept of FOIP, shares the same commitment as the United States to a “free and open international order” based on liberal democracy and free markets. However, these values were imposed upon it during the U.S. occupation after Japan’s defeat in World War II. Unlike Washington, Tokyo is not in a position to enforce said values due to Article 9 of its Constitution, which prohibits the use of force overseas. Despite attempts by the ruling Liberal Democratic Party (LDP) under former Prime Minister Abe Shinzo, the main architect of FOIP, to revise Article 9 in order to allow Japan’s Self-Defense Forces (SDFs) to engage in joint military exercises with other members of the Quad and the United States in particular, the Japanese people remain attached to their “peace constitution.” Indeed, a commitment to peace forms an arguably more important component of Japan’s post-war national identity than its commitment to liberal democratic values, although the two are frequently intertwined in the Japanese national consciousness: liberal democracy is valued not as an end in itself but a means to bringing about peace.

Therefore, there are limits to the Japanese willingness to defend FOIP and the post-war order from which it has economically benefitted. These limits may be exposed if Xi Jinping attempts to take a leaf out of Putin’s playbook and reunify Taiwan with the mainland by force. In the event of an invasion, Tokyo would be unable to send more than moral and economic support despite Prime Minister Kishida’s assurances that Japan would bolster its defense capabilities, leaving the United States to shoulder the burden of defending its ally as President Biden unambiguously promised in his meeting with his Japanese counterpart. Furthermore, Japan may be unwilling to impose the same stringent economic sanctions on its largest trading partner as it has imposed on Russia. For the conservative Japanese foreign policy establishment, FOIP may be a convenient if limited tool to use to discourage the PRC from encroaching in its territorial waters, particularly around the disputed Senkaku islands by committing the U.S. navy to its defense. It is not an instrument for reshaping the region along democratic lines, which may be counterproductive given Japan’s need to obtain the PRC’s consent for its attempt to secure permanent membership on the United Nations Security Council (UNSC).

India, like Japan, has similar designs for a permanent seat on the UNSC and its own territorial disputes with the PRC. Indeed, it lost a border war with China in 1962, bringing to an end the Nehruvian vision of “Hindi-Chini bhai-bhai” (literally “India and China are brothers”), a non-aligned movement led by the two most populous states in Asia. However, the commitment of the ruling BJP to an ideology of Hindu nationalism centered on the concept of Hindutva (lit. “Hindu-ness”) brings into question the very idea of India as a secular, democratic state. Particularly since the re-election of BJP member Narendra Modi for a second term with a landslide majority, India has begun to resemble a Hindu Rashtra; a Hindu state in which minorities are expected to assimilate to a national culture defined along Hindu lines. This has been exemplified by the abrogation of Article 370 in Kashmir, which guaranteed India’s only Muslim-majority state a measure of autonomy. On August 5, 2019 Indian troops effectively invaded Kashmir, dissolving the state government, detaining Kashmiri politicians, and cutting off communications with the outside world.

At the same time, the Citizens Amendment Act (CAA)  effectively stripped Muslim refugees of their right to citizenship on the basis of their religion. The Indo-Pacific as a foreign policy concept not only re-centers India as a more influential regional actor at the expense of China but also marginalizes the historical influence of Islam in shaping the region by downplaying the role which Muslims played in setting up maritime “Silk Roads.” For India, the FOIP offers opportunities to get support from the Quad to recognize Indian claims over Kashmir and to deter Chinese and Pakistani-backed militant encroachment on the line of actual control.

In reflection, the Quad doesn’t just need a “harder edge,” but the region it claims to lead needs to be re-envisaged entirely. Rather than conceiving of the Quad as an alliance of liberal democracies protecting the Indo-Pacific region from an authoritarian hegemon, the Tokyo summit provided an opportunity for the leaders of the Quad to critically reflect on the values upon which the region should be based. Whose values are they and whose interests do they serve? It is worth remembering that the “democratic” values upon which FOIP are based were imposed upon its Asian members by force. In the case of Japan, the trauma of Hiroshima led post-war Japan to “embrace defeat.” In the Indian subcontinent, the rule of law was introduced as a result of British colonialism, and limited electoral reform was used as an instrument of divide et impera. India’s democracy was forged by the Indian National Congress (INC) in opposition to British imperialism, which was materially and ideologically supported by the other Anglo-Saxon members of the Quad. Following independence, India found itself outside of an emerging liberal world order seemingly defined on racial lines, and, for a time, was increasingly drawn into the Soviet orbit regardless of the common “democratic” values it shared with other members of the Quad.

For the Quad to exercise leadership in the Indo-Pacific region, it needs to find ways of engaging with the interests and values of the diverse actors in the region, including the PRC and Islamic states such as Pakistan and Bangladesh who have been excluded. The Quad can play a key role in facilitating a dialogue on what a “free and open Indo-Pacific” would look like—but only if it questions rather than asserts the universality of the “fundamental values” it claims to represent, thus facilitating a transition from a liberal to a post-western order. If it does not, a weakened Quad risks becoming a bystander to China’s long anticipated rise to regional hegemony and the consolidation of a Sino-centric world order.

Giorgio Shani is a Professor of Politics and International Studies at International Christian University, Japan and Chair of IPSA RC43 Religion and Politics. He is the author of Religion, Identity and Human Security and Sikh Nationalism and Identity in a Global Age and co-author of Sikh Nationalism. Follow him on twitter @GiorgioShani. 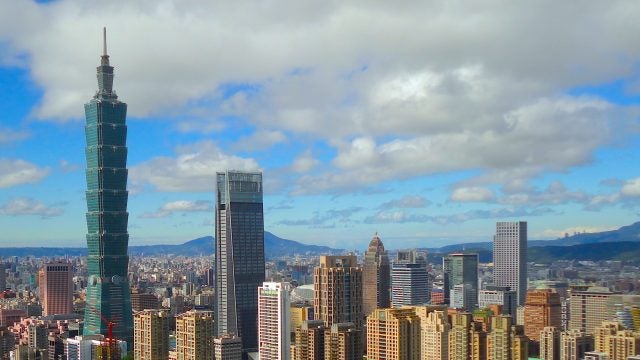