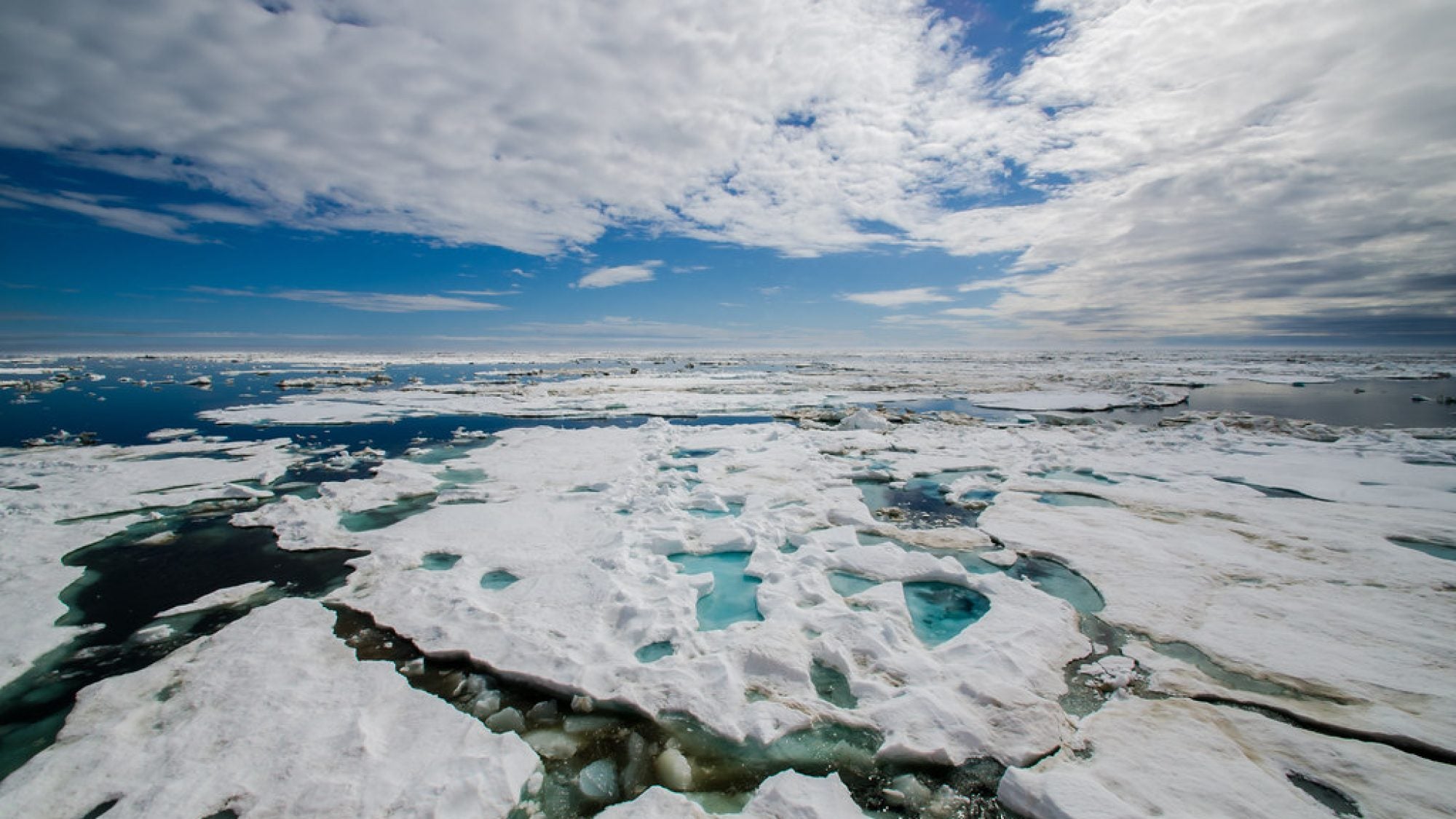 Title: As Russia-Ukraine War Rages, America Refocuses on the Arctic

The United States recently announced a series of Arctic policies, from the creation of a new Arctic ambassadorial position to the release of an updated Arctic strategy. Amid the alignment of the seven Arctic states (A7) in opposition to the Russian invasion of Ukraine, the updated US Arctic strategy excludes Russia from Arctic cooperation, as well as renews the American commitment to Alaska Natives.

American overseas strategy and diplomacy has increasingly refocused on the Arctic region, given the Russia-Ukraine war and climate change. Russia’s continued war of aggression against neighboring Ukraine calls into question the Kremlin’s commitment to and respect for existing national boundaries, which has led to a reassessment of Arctic policy and strategy among its circumpolar neighbors. At the same time, climate change persists in thawing the polar world at an alarmingly intense rate. These developments have produced a slew of recent Arctic organizational, policy, and strategy updates from the White House. The renewed strategic and diplomatic interest in the Arctic was evident in the Biden administration’s August 2022 announcement of its plan to establish a new ambassador for the Arctic region, followed in September by the creation of a new Arctic Strategy and Global Resilience Office at the Pentagon. Iris A. Ferguson, formerly a senior advisor on Arctic and climate security for USAF Futures, was appointed the first Deputy Assistant Secretary of Defense for Arctic and Global Resilience.

Then in October, the White House unveiled the National Strategy for the Arctic Region, updating its 2013 strategy to reflect today’s complex Arctic landscape. As noted in the strategy’s executive summary, the new Arctic approach “addresses the climate crisis with greater urgency” with renewed commitments to sustainability. The new strategy is based on the twin goals of improving northern livelihoods and conserving the northern environment, and “acknowledges increasing strategic competition” with the aim to “position the United States to both effectively compete and manage tensions” in the Arctic. The updated strategy includes the following four pillars: security, climate change and environmental protection, sustainable economic development, and international cooperation and governance. Regarding the fourth pillar about Arctic cooperation, the strategy makes clear that “despite the challenges to Arctic cooperation resulting from Russia’s aggression in Ukraine, the United States will work to sustain institutions for Arctic cooperation, including the Arctic Council.” This commitment to Arctic cooperation is important considering that the United States has led efforts to isolate Moscow and decouple it from both the diplomatic and globalized economic communities since the invasion of Ukraine. For example, the United States initiated a boycott of the Arctic Council because of Russia’s rotating chairmanship and withdrew from cooperative Arctic activities that included Russian participation, despite Russia’s importance as the largest of the Arctic states with the greatest Arctic population on the Council.

As a headline in the October 10th edition of High North News aptly summarizes, “New US Arctic Strategy Foreshadows Increasing Hurdles for Cooperation in a More Complex Region.” Even with Europe convulsed by Russia’s war in Ukraine and the specter of horizontal and vertical escalation worrying many members of the strategic community, the updated US Arctic strategy “seeks an Arctic region that is peaceful, stable, prosperous, and cooperative” with “guardrails to manage competition and resolve disputes without force or coercion … working primarily with our allies and partners to solve shared challenges.” It is also a strategy that will ensure that Russia is relegated from the center to the sidelines of Arctic diplomacy “for the foreseeable future.”

Aside from the unprecedented challenges that Russian aggression presents to Arctic security, there is still much in the updated US Arctic strategy that is familiar, with an echo of the collaborative dynamic embraced in past American strategies and policies towards the region. Indeed, the 2022 strategy is not the first to note new challenges to the cooperative Arctic, with such concerns finding more prominence in policy statements after Russia’s annexation of Crimea in 2014 and after China’s self-declaration as a “Near-Arctic” state in 2018. Though it responds to the many newly-perceived risks associated with Russia’s continued military aggression in Ukraine, the updated strategy still conveys an enduring hope that the Arctic can continue to be a region defined more by cooperation than conflict. This desire was eloquently articulated by the late final Soviet premier Mikhail Gorbachev, who oversaw the peaceful dismantlement of Moscow’s empire, when he proposed that the Arctic serve as a zone of peace. This zone would provide an off-ramp to bring the Cold War to a peaceful conclusion, as per Gorbachev’s famed 1987 speech from Murmansk. In the near-term, however, Arctic cooperation will remain exclusive to NATO’s Arctic members (with Sweden and Finland now just two ratification votes away from full inclusion in the alliance); in contrast to most of the post-Soviet era, Russia is now fully excluded from this zone of Arctic cooperation.

Importantly, Arctic Indigenous Peoples feature prominently as partners in US Arctic strategy and their inclusion has been elevated to the first guiding principle of the new strategy, strengthening the domestic and transnational bonds of Arctic cooperation even as Russia remains sidelined. Two of the strategy’s four pillars directly address Indigenous Peoples and their wellbeing. The second pillar (on climate change and environmental protection) describes Washington’s commitment to partnering with both “Alaskan communities and the State of Alaska” to foster climate resilience, emissions reduction, improved scientific cooperation, and ecosystem conservation, while the third pillar (on sustainable economic development) outlines Washington’s pledge to “sustainable development and [the] improve[ment of] livelihoods in Alaska, including for Alaska Native communities.”

Moreover, all four pillars of the updated strategy are guided by five principles, the first of which is to “Consult, Coordinate, and Co-Manage with Alaska Native Tribes and Communities,” elevating co-management from a mechanism of regional decision-making to a prominent guiding principle for Arctic strategy for the first time. Hence, the updated Arctic strategy reinforces Washington’s commitment to “regular, meaningful, and robust consultation, coordination, and co-management with Alaska Native Tribes, communities, corporations, and other organizations and to ensuring equitable inclusion of Indigenous Peoples and their knowledge.” As US National Security Advisor Jake Sullivan explained in an October 7th tweet, the new strategy thus “demonstrates domestic and foreign policy are connected. We will invest at home, including in Alaska, and deepen Arctic cooperation with allies and partners in ways that make us stronger.” While the practical impacts of this policy on Arctic Indigenous Peoples cannot yet be known—likely to include both much-needed infrastructure development along with the promised increase in tribal consultation—the importance of Indigenous engagement by the White House in its new Arctic strategy cannot be overstated.

The updated US strategy for the Arctic region, with echoes of more cooperative times, offers hope that the Arctic can continue to be a region characterized by cooperation rather than conflict, with the caveat that in the short-term, such cooperation must be limited to NATO’s Arctic members to the exclusion of Russia. Prominently featuring Arctic Indigenous Peoples as partners in the US Arctic strategy, with Indigenous engagement elevated to the first guiding principle for the strategy, further strengthens the fabric of Arctic collaboration. This American commitment to Arctic Indigenous Peoples harmonizes interstate and state-tribe relations, within and between the A7, as they become more tightly aligned under NATO. In turn, this harmonization enhances the collective effort to deter Russian aggression from extending beyond Ukraine to the still, at least for now, peaceful Arctic.

Barry Scott Zellen, PhD, is a Visiting Scholar in the Department of Geography at the University of Connecticut, Senior Fellow at the Institute of the North, and International Arctic Correspondent for the INTERSEC Journal.