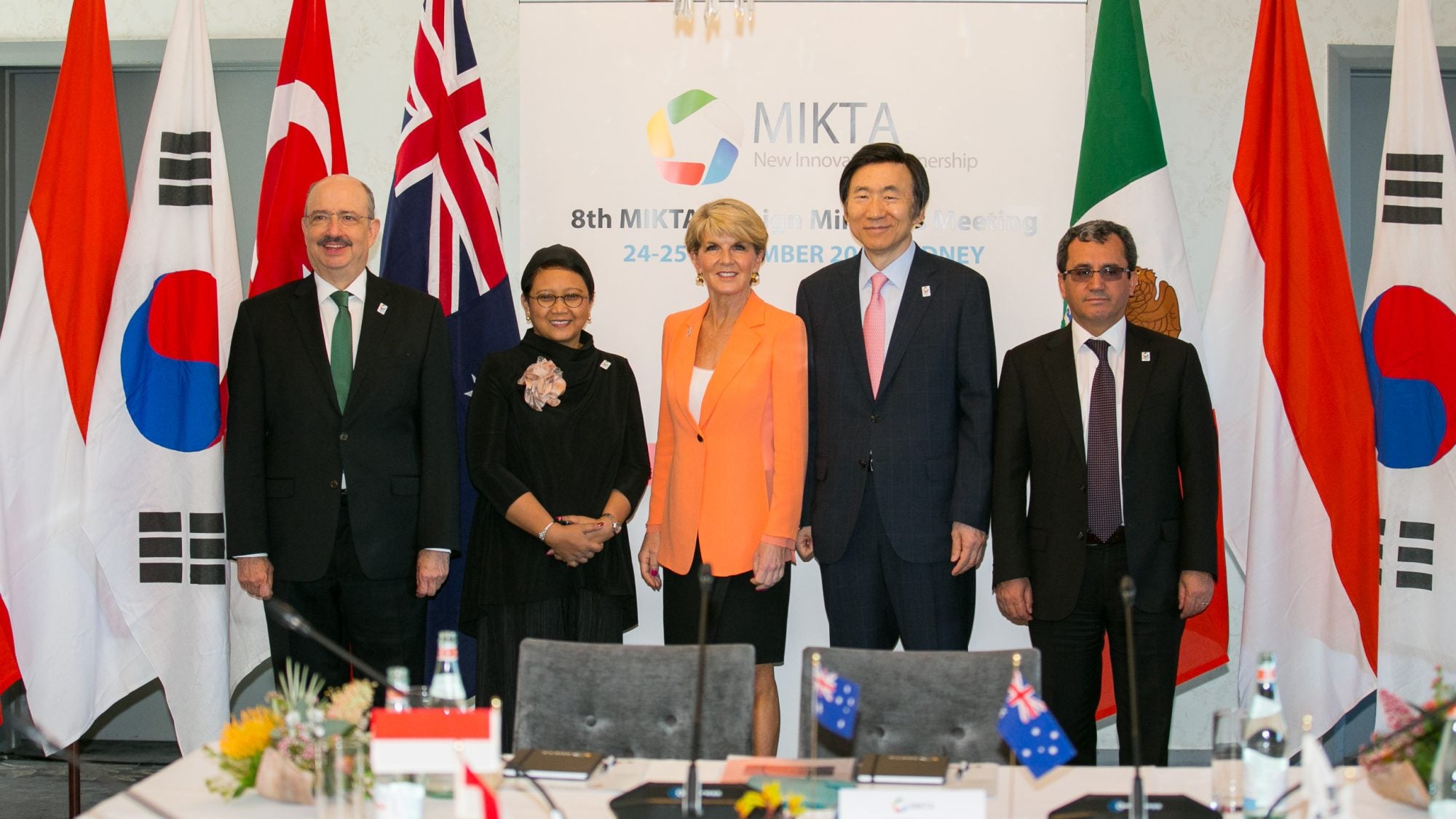 The middle power moment is over. From 1945 to 2000, they were the most influential type of secondary state. MIKTA’s increasing irrelevance suggests we should start the process of re-examining and re-theorizing the role of secondary states outside the constraints placed upon the understanding that was inherited by the scholarly study of middle powers. MIKTA was the middle power’s last hurrah.

In September 2013, the foreign ministers of Mexico, Indonesia, South Korea, Turkey, and Australia (MIKTA) met at the sides of the United Nations General Assembly (UNGA) to “find common ground for cooperation” and act as a “facilitator in launching initiatives and implementing global governance reform.” Amidst the G7/8 and BRICS, MIKTA soon took on the guise of a middle power grouping. A wave of scholarship appeared heralding the promise of minilateralism and an imminent middle power revival.

Just under ten years later, MIKTA’s failures and increasing insignificance have quashed hopes for a middle power revival, and today even point to the irrelevance of the middle power concept. Was MIKTA the middle power’s last hurrah?

The modern middle power concept first appeared at the close of the Second World War as a group of secondary states that played a prominent role in the war sought to play an equally prominent role in the emerging postwar order. Australian and Canadian politicians and diplomats pushed for the recognition of a distinct category of states in global governance, including at the United Nations Security Council (UNSC). At the same time, the concept entered the mainstream media and the academic imagination, and a new subfield of international relations was born.

Although given less attention in the United States, over the next fifty years the subfield grew substantially. During the 1940 and 1950s scholars explored the emerging middle power role in multilateralism and global governance; in the 1960–80s they explored how the subfield fit into realist and liberal theoretical frameworks; and in the 1990s they explored new ways of thinking about middle powers in a rapidly transforming post-Cold War international order.

MIKTA originally grew out of South Korea’s growing identification with the middle power concept. The concept first appeared in Korean language academic and political discourse in the 1990s but failed to gain widespread acceptance until the mid 2000s. Like all introduced terms, the concept entered the language at different times and took on different contextual meanings. Reflecting this, South Korea as a middle power was distinct. It was a late entrant to the middle power category, it never espoused the same consistency in values, it was not inherently a status quo power, and to a degree it lacked institutional capacity and depth. South Korea as a “middle power” was fundamentally different from Australia and Canada. The chances were high that its “middle power” initiatives would also be different.

There are a number of characteristic Australian and Canadian-led diplomatic initiatives routinely cited in studies on middle powers: the formation of the Cairns Group, and its instrumental role in liberalizing agricultural trade at the GATT/WTO; the establishment of the Asia Pacific Economic Cooperation (APEC) and open regionalism; and the Ottawa Treaty and the Cambodia Settlement, and their impacts on arms control and peacebuilding, respectively. These initiatives share certain characteristics: they hold clear and limited diplomatic objectives shared between like-minded states; they utilize “niche” diplomatic resources developed over many years; they utilize activist, innovative approaches to diplomacy often beyond the state, such as inter-governmental organizations or non-governmental organizations; and they highlight the initiative’s contribution to global good or “good international citizenship.” MIKTA shared none of these characteristics.

While its inadequate conceptualization foreshadowed its demise, MIKTA’s fate was ultimately sealed by factors beyond its control. First, each country involved faced changes in government, including an abrupt change in South Korea when President Park Geun-hye was removed from office. This reduced domestic support for the initiative. Second, COVID-19 suspended diplomatic meetings and gave a strong rationale for states to rethink priorities, including the hosting of less effective initiatives on the digital diplomacy periphery.

Lastly, MIKTA failed the ultimate middle power test—Russia’s invasion of Ukraine. A fundamental contribution to the earliest thought on the middle power concept was the recognition that in any international order, “great powers” must have their interests protected to sustain participation, but at the same time, there must be a means to constrain their excesses. Early middle power scholars recognized that the way to achieve this was through joint action and the maintenance of strong global governance institutions: the rule of law and multilateralism, and the tenets it supported, including those expressed in Article 2 of the United Nations Charter, which proscribed “the threat or use of force against the territorial integrity or political independence of any state.”

In March 2022, in point 15 of the Joint Communique of the 20th MIKTA Foreign Ministers’ Meeting, members deplored “in the strongest terms Russia’s aggression against Ukraine.” In diplomatic terms, this was an incredibly weak action—essentially the least that could be done. Member states hold widely varying positions on Russia’s invasion and clearly share no consensus on the rule of law and multilateralism, and the tenets it supports. The failure to act together on Russia’s invasion of Ukraine marked the failure of MIKTA as a “middle power” initiative.

MIKTA and the Study of Middle Powers

MIKTA was the last attempt to forge a grouping that, at last in rhetoric, sought to recapture the “do good” or “good international citizenship” ideals associated with the middle power concept. Its incapacity to act marks a fundamental transformation. The “middle power” is today a historical neologism. It is a label that has meaning only in its historical context—a period in which these states through their capacity and hierarchical position were able to exercise influence within the US-led international order.

The “middle power” was a specific type of secondary state active in global governance between the years 1940 and 2000. Applying the neologism to states prior to and after the period 1940–2000 risks losing the concept’s value—investigating and understanding the conditions that allowed such states to steer global governance and address issues of concern to humanity, such as humanitarian intervention, arms control, environmental protection, and rule of law.

The middle power moment is over. Increased tension between China and the United States makes characteristic middle power initiatives of mediation, facilitation, institution building, or norm strengthening substantially more difficult. It’s not insignificant that recognized periods of Australian and Canadian middle power activity occurred at the end of the Second World War and the Cold War—not as tension was rising.

MIKTA’s increasing irrelevance suggests we should start the process of re-examining and re-theorizing the role of secondary states outside the constraints placed upon the understanding that was inherited by the scholarly study of middle powers.

Academics do not use Cold War terminology, such as “superpower,” when talking about Napoleonic France. Nor do they use it when discussing modern China and the United States. Outside of the media, the term “superpower” only makes sense in the context of the Cold War and the rivalry between the United States and the Soviet Union. In the same way, the term “middle power” now belongs to a past era. The modern secondary power is not a status quo state, does not necessarily conform to the US-led international order, and plays a larger and potentially disruptive role in determining the outcomes of primary power competition.

The middle power term will still be used. It’s an easy label to throw about, and politicians and journalists will never give it up. But academics should be held to a higher standard. We need to recognize that middle powers are a thing of the past. Middle powers were a distinct subcategory of secondary states. Not all secondary states were or will be the same. MIKTA—the middle power’s last hurrah—should be a wake-up call.

Jeffrey Robertson is an associate professor of diplomatic studies at Yonsei University. Before moving to academia, he worked for the Australian Government in the fields of diplomacy, foreign policy, and North Asia. His current research interests include the diplomatic practice and foreign policy of middle powers. He writes and updates research at https://junotane.com and on Twitter @junotane.