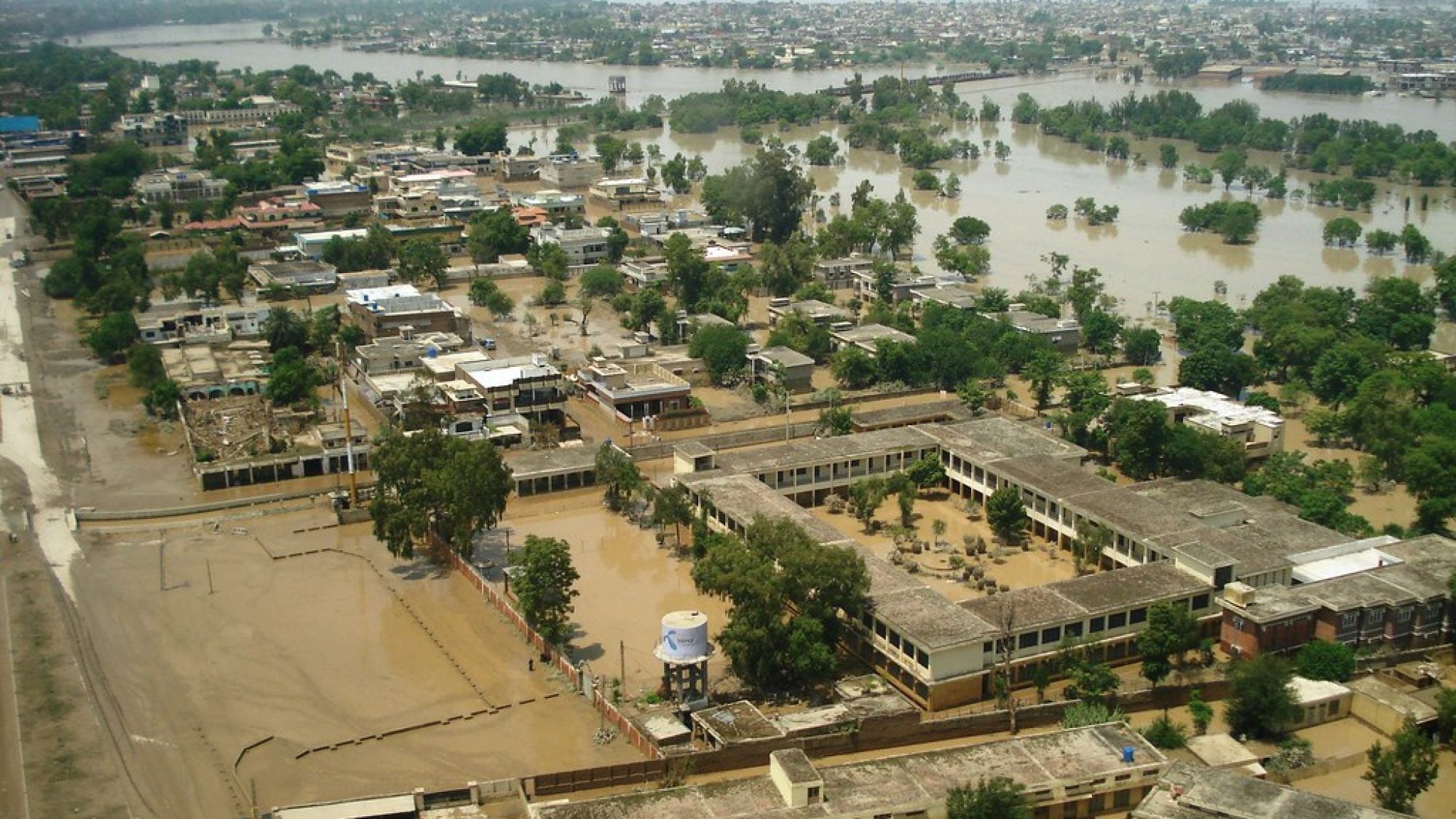 The question of financial payments for loss and damage resulting from climate change has emerged as one of the key policy issues at the twenty-seventh Conference of Parties meeting (COP 27) in Sharm El-Sheikh, Egypt in November 2022. However, it is unlikely to be settled soon during ongoing global negotiations on this topic, as there is serious geopolitical asymmetry in addressing climate-related loss and damage between high- and low-income countries. In recent years, the significant effects of climate change and global warming from the continued emissions of greenhouse gases have grown increasingly worse. Moreover, extreme weather events—such as severe storms, widespread floods, prolonged droughts, forest wildfires, and rises in temperature—have disproportionately affected low-income and small island countries, which have little responsibility for causing climate change and lack the resources to ameliorate such impacts. Nevertheless, most of the industrialized countries responsible for the climate crisis have been reluctant to provide the resources needed to compensate these countries for climate-related loss and damage.

Today, the global community is facing an existential crisis that threatens human well-being and the web of life on our planet. A recent United Nations report indicates that we have already reached a global mean temperature of 1.1oC over preindustrial levels, and the 2018 interim Special Report of the Intergovernmental Panel on Climate Change (IPCC) projects a 1.5oC increase in global temperatures over preindustrial levels to occur between 2030 and 2052. Temperatures have soared to such levels that some geographic areas may become increasingly uninhabitable. High temperatures in 2022 in some parts of India and Pakistan were over 120°F, and 60 percent of the workforce in India and 40 percent of the workforce in Pakistan labor in agriculture, working outdoors without access to cooling facilities and often lacking adequate drinking water.

During the past summer in Pakistan—a country which has contributed less than 1 percent of greenhouse gas emissions—“a monsoon on steroids” resulted in river basin floods, covering one-third of the country. These floods devastated the homes and livelihoods of 33 million people, destroyed millions of acres of crops, and left a broad swath of the population vulnerable to debilitating illnesses. In East Africa, heat waves and four failed rainy seasons have decimated crops, left thousands of people and animals dead, and put approximately 10 million additional people in danger of perishing.

There is widespread recognition that the burdens of climate change and global warming fall most heavily on lower-income countries and on the poor and vulnerable members of all societies around the globe. As Table 1 indicates, the populations of many low- and low middle-income countries are currently subject to the worst impacts of climate change and global warming. Over the past two decades (1998 to 2017), extreme weather events in these countries caused significant monetary losses (~ $593 billion) and deaths (~ 293,000), for which they lack the financial means or internal resources to compensate.

This imbalance between those countries that are responsible for climate change and global warming and those countries that are disproportionately suffering their effects constitutes a significant ethical issue, which the international community is rightly being called on to address. In a recent World Resources Institute study, the authors point out the stark gap between top and bottom greenhouse gas emitters: “The top three greenhouse gas emitters—China, the European Union and the United States—contribute 41.5% of total global emissions, while the bottom 100 countries account for only 3.6%. Collectively, the top 10 emitters account for over two-thirds of global GHG emissions.” In Table 2, annual carbon dioxide emissions of the top ten countries for the year 2018 are shown.

Since the mid-18th century, the United States has historically been by far the largest contributor to atmospheric CO2, followed by the European Union (which included the United Kingdom when the data were compiled). Table 3 lists the top ten historical contributors of CO2 based on cumulative historical data of emissions (1751 to 2017) obtained from the Oxford Martin School, a research institute at Oxford University.

Table 3: Historical Cumulative Carbon Dioxide Emissions from 1750 to 2018, by Country and Region. Source: Our World in Data, Oxford Martin School

Past Commitments to Provide Financial Assistance for Loss and Damage

The question of payment for climate-related loss and damage is not a new issue. Representatives of the Alliance of Small Island States (AOSIS) first raised the question in the early 1990s under the United Nations Framework Convention on Climate Change (UNFCCC). At the 2009 COP 15 meeting held in Copenhagen, developed countries pledged to raise $100 billion per year by 2020 to assist low-income, vulnerable countries to combat climate change impacts. This commitment was then formalized at the COP 16 meeting in Cancun and the COP 21 meeting in Paris. However, the financial assistance commitment made in Copenhagen has not been fulfilled. At last year’s COP 26 meeting held in Glasgow, the date for its implementation was pushed forward to 2023.

High income countries—particularly those whose carbon emissions have significantly contributed to global climate change—have an ethical obligation and moral imperative to make payments to lower-income and vulnerable countries to compensate for loss and damage from climate-related events. Hitherto, many industrialized, developed countries have been resistant in doing so, even after they made explicit commitments to provide financial assistance. A multilateral funding institution, the Green Climate Fund (GCF), was established over ten years ago to provide economic assistance to low-income countries affected by climate change. However, between 2015 and 2019, a total of $10.3 billion (with only $8.3 billion confirmed) was raised from various donor countries and private funding sources, which was used for various projects. Co-financing with private parties raised another $28.5 billion. Moreover, the latter came mainly in the form of interest-bearing loans and private investment projects, not as monetary grants or in-kind assistance.

Even if more funds were to be forthcoming, they would be insufficient to cover current or future climate-related loss and damage. The United Nations Environment Programme in its recent Adaptation Gap Report (2020) assessed the financing needs of low-income countries as follows: “Annual adaptation costs in developing countries alone are currently estimated to be in the range of US$70 billion, with the expectation of reaching US$140–300 billion in 2030 and US$280–500 billion in 2050.”

International Mechanism for Financial Assistance on Loss and Damage

In a previous paper, we proposed the establishment of a well-financed Global Climate Reparations Fund, whose main goal would be to enable the funding of adaptation and resilience building programs. However, the scale of the destruction from this summer’s floods in Pakistan’s Indus basin has intensified the drive for more immediate compensation for disaster relief and longer-term loss and damage funds. Relatedly, a recent UN Human Rights Committee decision stated that the Australian government had failed to protect the people living on the Torres Strait islands off the northern tip of Australia from the effects of climate change. Its conclusion that the Australian government had to pay compensation for the harms caused may also encourage other governments to look more seriously on legal claims for climate-related loss and damage.

Another more feasible approach to compensate for loss and damage is to lessen the debt-burden of climate-vulnerable, lower-income countries, as was suggested by the Vulnerable Group of Twenty in advance to the 2021 COP 26 meeting in Glasgow. They proposed major debt forgiveness through a “debt for climate swaps,” enabling the twenty most vulnerable countries to have financial and in-kind resources for climate-related loss and damage.

At present, we have a patchwork of poorly-funded programs to meet the financial needs of vulnerable communities, millions of displaced people, and environmental refugees affected by climate-related loss and damage. For these reasons, developing an institutionally viable and well-administered international financial scheme will require several elements to be brought together in a well-coordinated and coherent manner. The first important step is to create an institutional framework for a multilateral financial mechanism on loss and damage, consistent with the provisions of the Warsaw International Mechanism on Loss and Damage and Article 8 of the Paris Agreement. From the beginning, priority for financial assistance on loss and damage should be given to adaptation programs and those related to resilience building. The central feature of the proposed institutional framework is establishing a permanent insurance program on loss and damage and disaster relief, with premiums/donations allocated to parties according to current and cumulative greenhouse gas emissions. Finally, there is a necessity to develop a joint multilateral/bilateral in-kind assistance program for: (a) technology transfer on adaptation programs and resilience building, (b) capacity building and sharing of technical expertise, and (c) intensive training programs on resilience building in the community.

There is an urgent need to tackle the issue of climate-related loss and damage to avoid any further disarray caused by wealthier countries’ current unwillingness to address the problem of financial assistance to vulnerable communities in a timely and well-coordinated manner. Continuing failure to do so will enact a high price on the economic status and human welfare of low-income countries, while threatening the national and global security of rich and poor countries alike in the near future.

Despite earlier projections of a deadlocked outcome, the COP 27 meeting at Sharm El-Sheikh, Egypt, agreed on establishing a road map toward achieving a climate-related loss and damage fund. At the conclusion of this historic event, representatives at the UN-sponsored meeting approved: (a) creating an institutional framework for providing grant-based financial assistance to developing countries most impacted by climate change, (b) placing priority to funding adaptation programs in vulnerable communities, (c) harmonizing existing financial institutions’ abilities to simplify and provide direct access to funds, and (d) ensuring bilateral, regional and multilateral assistance on technological and capacity-building programs. What was not decided at this meeting was assigning financial responsibility for loss and damage among developed countries, based chiefly on their current and past historic greenhouse gas emissions. It is expected that this challenging issue will be taken up next year at the COP 28 meeting, to be held in Dubai, UAE.

Audrey Chapman is a professor of medical ethics and humanities and the Joseph M. Healey Jr. Chair in Medical Humanities and Bioethics at the University of Connecticut Health Center in Farmington, CT.