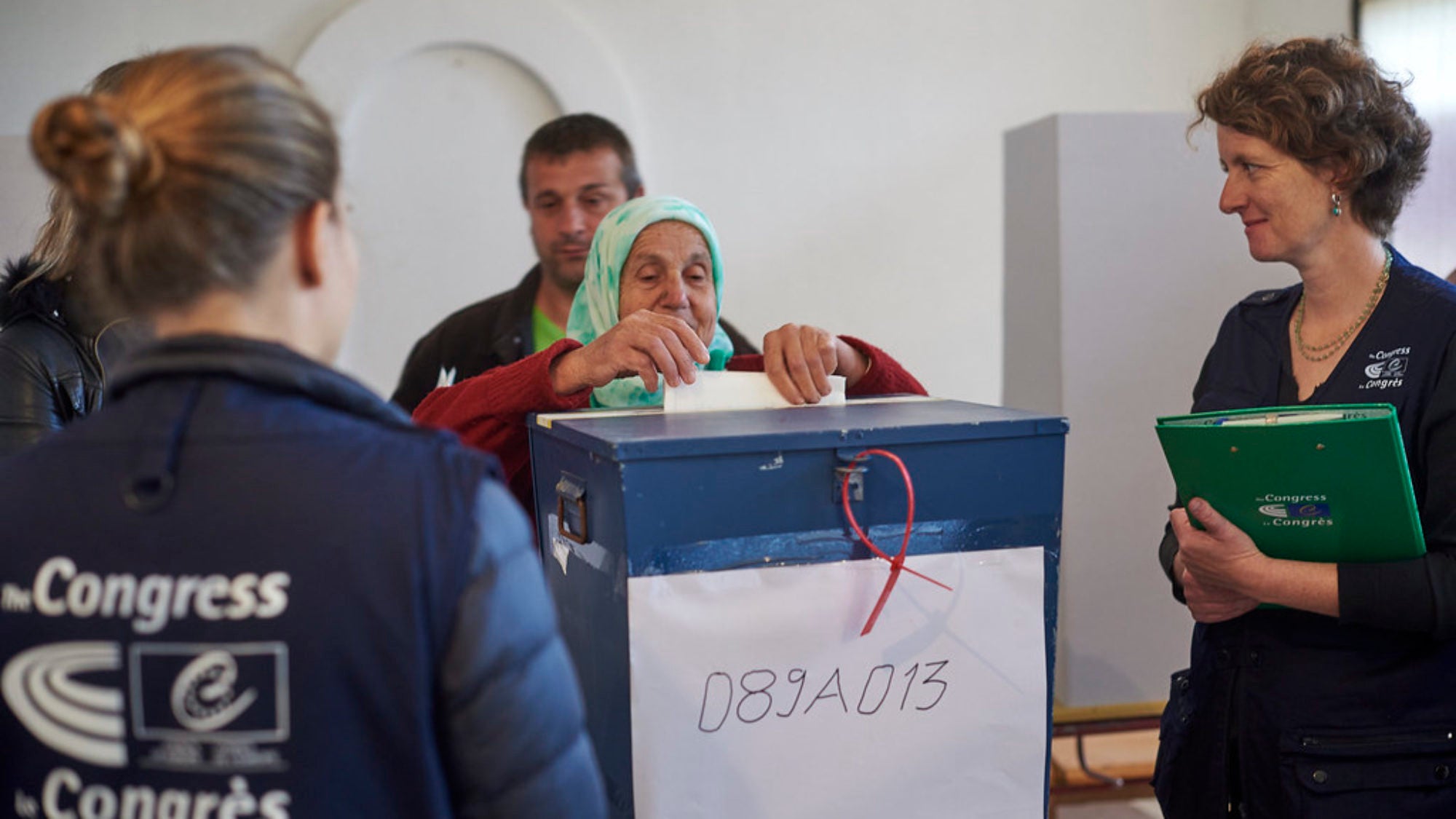 Title: Part I: Bosnia and Herzegovina after the October 2018 Elections: Highly Volatile, Yet Functionally Inert

The following is the first of a two-part series.

More than half a year ago on October 7, 2018, Bosnia and Herzegovina (hereinafter “BiH” or simply “Bosnia”) held general elections in a highly charged environment in which leading political figures questioned not just the configuration of the state, but its very continuation. At the time of writing, nearly eight months later, a state-level government has yet to be formed. But the announcement of a coalition agreement among three Federation-based parties in mid-May seems to indicate the potential for yet more patronage and drift, as the domestic and regional environment becomes more tense.

While the elections did not appear to change a great deal on the surface, cracks became apparent in the system. The country’s two “entities”—the Republika Srpska and the Federation of BiH—have significantly different structures, the former being more centralized and the latter divided into ten ethnically based cantons. In the Republika Srpska, Union of Independent Social Democrats (SNSD) leader Milorad Dodik’s political dominance has been—at least in terms of formal politics—reinforced, though it is still reliant on coalition partners. In the Federation, the hitherto dominant SDA and HDZ both sustained serious damage to their credibility in the elections, with potential for them to be shut out of the Federation government altogether, along with several cantonal governments. The biggest upset was the election of Sarajevo Croat Željko Komšić for the third (non-consecutive) time to the Croat seat on the BiH tripartite presidency over Dragan Čović, leader of the Bosnian Croat nationalist Croatian Democratic Union of BiH (HDZ BiH, a branch of Croatia’s HDZ). Milorad Dodik (whose longtime ally Željka Cvijanović has succeeded him as RS President) and the Bosniak nationalist Party of Democratic Action’s Šefik Džaferović were also elected to the presidency. This has amplified the long-standing HDZ BiH complaint that the BiH electoral system is stacked against Croats, allowing non-Croats to vote for the Croat member. However, these same rules have prevailed in every general election since the end of the 1992-1995 war. Croatia continues to weigh in heavily to press for what would amount to a “third entity;” the HDZ BiH can prevent the formation of the Federation’s government through impeding government formation in the cantons it controls. Dodik and Čović have been political allies for over a decade in dismantling state institutions and pursuing disintegrative policies. On December 18, 2018 the Central Election Commission’s two Croats and two Serbs, together with one “other,” voted against the two Bosniaks in favour of an election law change that would use 2013, as opposed to 1991 census data, inter alia. At the time of writing the government formation processes continue.

The little international attention given to Bosnia and Herzegovina often focuses on its post-election politics and the machinations of external illiberal actors (such as Russia, Turkey and China). However, the meta-level story—which begins in 2006, well before the Euro crisis—is that of how a country with such a dominant European Union (EU)-led Western presence could go so far off the rails.

It was not supposed to be this way. As recently as 2005, just a decade after the war, the public mood was largely optimistic about the country’s trajectory and prospects after four years of a conflict which killed 100,000 and displaced over two million. Yet, the dysfunction, popular frustration, and potential for organized interethnic violence can be traced to decisions made in the middle of the last decade, based on hubristic presumptions on Bosnia’s post-war constitutional structure established in the Dayton Peace Accords, the political incentives governing the country’s politics, and the EU’s transformative power.

How Did We Get Here? EU Hubris, Making “Soft Power” a Brand

In a nutshell, EU members, fresh from the “big bang” enlargement of 2004, believed its model would obviate the need for Dayton’s enforcement tools. Joseph Nye’s concept of soft power was adopted with a specific European twist following the United States-led invasion of Iraq, with the connotation that the EU need not employ coercive methods to wield leverage. These were the international High Representative (who holds the mandate for coordinating civilian implementation and enforcement) and the NATO-run Stabilization Force (SFOR), which held the mandate for ensuring a “safe and secure environment” and preventing a return to violence. These instruments were essential to the stabilization and state-building process that had accelerated, particularly from 2000 to 2005. The idea was that some important, but relatively modest, constitutional amendments could lock in the structural progress made to date—in the judiciary, taxation, and security spheres—as well as meet the challenges of joining the EU and NATO. The EU could lead from here, allowing the United States, which had been heavily engaged in forging the peace deal forward, to turn its attentions eastward.

These assumptions were perhaps always naïve, but at the time they seemed defensible and were widely shared. “Double-hatted” High Representative and EU Special Representative (EUSR) Paddy Ashdown, now a staple piñata for BiH politicians and EU bureaucrats alike for his strategic, political, and assertive approach. The expectation was that Bosnia’s politicians would, like their Central and Eastern European neighbors to the north as well as Croatia (which became a candidate in 2005), do the heavy lifting to join the club.

This was not to be. Over the course of 2006, several events ought to have led to a rethink, or at least a significant recalibration, of the EU-led approach. First, Ashdown’s successor as High Representative/EUSR Christian Schwarz-Schilling announced upon taking on the position that he would “step back,” using his executive “Bonn Powers” only to ensure war crimes accountability and to prevent the re-emergence of violence. While it took some time to fully register with the political elite, the testing of boundaries began almost immediately. Milorad Dodik, who became RS Prime Minister in early 2006 after the SDS-dominated government collapsed, campaigned for the October 2006 general elections on a platform that, in its essence, amounted to the following: I can protect and strengthen the RS better than its architects because, unlike them, I am not part of the party that ordered the Srebrenica massacre (which the ICTY ruled an act of genocide).

Dodik’s mooting the possibility of an undefined referendum was intentionally inflammatory, but it was also a test of international will to push back while under new management. All BiH citizens and post-Yugoslavs in the region would associate the word “referendum” with secession, and therefore violent conflict. After raising the potential for a referendum (with the attendant implication that it would be on RS independence), he was confronted with a public threat in the Austrian media by the High Representative, who mooted that he might be removed from office for threatening the Dayton order. However, when Dodik called to confirm that this was indeed a valid threat, he was told that it only held if he made preparations to actually organize one. Thereafter, he amplified his nationalist messaging undaunted by fear. He had taken the measure of Western will and found it lacking. This has remained the case ever since. And he has simply been the most vocal and theatrical beneficiary; he is hardly alone among the BiH political class. All vested interests have taken advantage of what amounts to a rules-free environment since 2006. The political turmoil in Bosnia—as well as the increasingly negative roles played by Zagreb, Belgrade, Moscow, and Ankara—has roots in the confluence of an inherently dysfunctional state structure and incentive system and the retrenchment of the only corrective that kept this in check for the first decade after the war: an assertive Western posture [1].

The False Grail of Stability

In the more than decade since, a cynical but readily apparent confluence of interests took form and remains dominant: the hope to maintain “stability” in the Western Balkans. This desire was understandable, particularly in a period in which policymaking bandwidth became absorbed by a succession of crises affecting the EU, such as the Greek debt and Euro crises, the Arab Spring—particularly the war in Syria—and the resultant spike in migration. Stability could have been viewed more strategically, whereby the EU could have applied its considerable clout to shape the environment to reduce the leverage of fear and patronage held by BiH and other Balkan elites, thereby making progress more likely. Instead, the member states effectively left the standing policy on bureaucratic autopilot, leaving the European Commission in a dominant position, and more broadly becoming consumed by a managerial risk-avoidance approach. The effective quid pro quo with dominant elites in BiH and the region became a protection racket: the EU-led West effectively abets ruling elites, accentuating the positive and buying social peace to prevent popular frustration from boiling over. Put bluntly, this amounted to a policy of stability over progress. To be fair, this has effectively been the approach taken toward the whole Mediterranean littoral, with even more unsavory consequences in North Africa and the Sahel, where the alliance with autocracies to stem migration makes the EU complicit in human rights violations. The difference between the Western Balkans and these African states is that, while mass migration from BiH and the Western Balkans is unwelcome in the EU, EU member state firms and governments have undertaken human asset-stripping through active recruitment efforts for professions in short supply, both highly skilled and less so. Tens of thousands leave BiH and the other regional countries for the EU annually.

[1] Already, by 2007, European Commissioner for Enlargement Olli Rehn noted the need for a mix of policy instruments. But the theological view that preparation for membership entails the necessary jettisoning of hard power tools in advance prevails to this day.

[2] Most widely known is the concept of “stabilitocracy,” a term coined in 2016 to refer to the unaccountable, increasingly authoritarian governments in the Western Balkans. See Florian Bieber, “What is a Stabilitocracy?,” Balkans in Europe Policy Advisory Group (BiEPAG), May 5, 2017. Available at: https://biepag.eu/what-is-a-stabilitocracy/ The idea that stability is job number one remains in vogue in EU member state capitals, the author having heard it from an official as recently as November 2018.

[3] This term is not yet in vogue in the region, though it captures the phenomenon perfectly. It was employed as early as 2009 in the sense I apply it here. See Nigel Pocock, “An ‘open door’ to immigration: a well-intentioned path to harm?,” The Prisma, August 4, 2013. Available at: http://theprisma.co.uk/2013/08/04/an-open-door-for-immigration-a-well-intentioned-path-to-harm/

Kurt Bassuener is co-founder of the Democratization Policy Council, a Berlin-headquartered think-tank founded in 2005. He is also a PhD candidate and Fulbright Scholar at the University of St. Andrews in Scotland. He has been a professional Balkan policy analyst and advocate since 1997, serving as an advisor to incoming international High Representative Paddy Ashdown in 2002 and serving in the Office of the High Representative in 2005-2006. He lived in Sarajevo from 2005-2016.