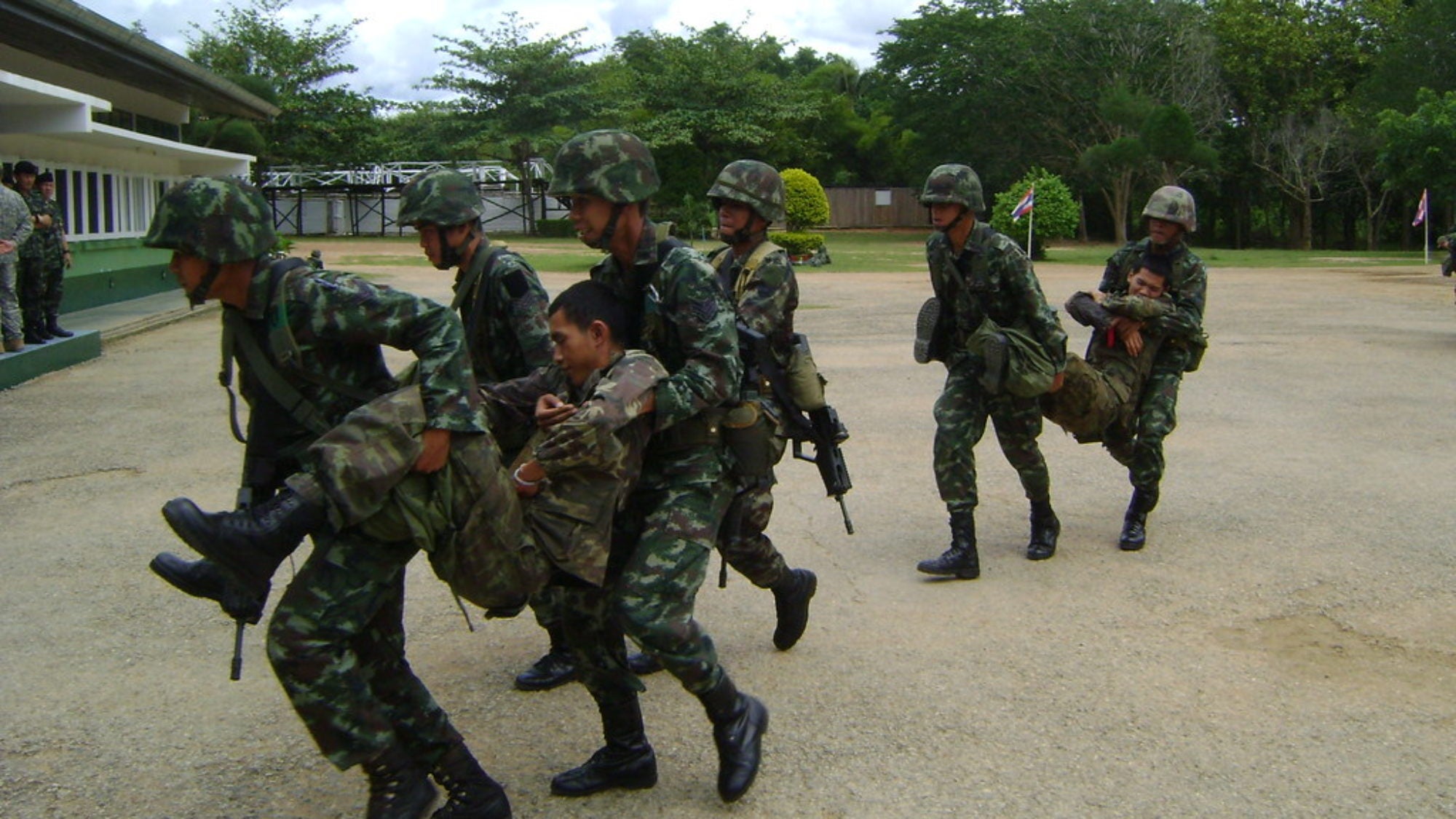 One of the thorniest counter-insurgency (COIN) issues for states is dealing with captured suspects. Holding them indefinitely as prisoners of war is one option, but this method legally precludes interrogation and the acquisition of actionable intelligence. It also legitimizes the insurgents’ struggle, which most governments loathe, instead choosing to refer to them as “terrorists” or “murderers.” Conversely, trying insurgents under existing criminal codes, or with extra security measures, poses risks. Thailand, which has been embroiled in an insurgency for over a decade, uses both techniques in its COIN model. However, Bangkok’s politicized and unaccountable approach to its violence-ridden south remains counterproductive in resolving the root causes of the insurgency.

The insurgency began in January 2004. It currently involves three-and-a-half Muslim-Malay majority provinces in southern Thailand and has exacted a heavy human cost—roughly 7,000 people have been killed and 11,000 wounded. The conflict centers on identity—the ultra-Buddhist nationalist Thai elite remain frustrated that the Pattani Malay are the only minority group in the country that has steadfastly resisted assimilation. The local Malay regard the government as an occupying force, especially given Thailand’s administration of the area. Since mid-2005, the region has been governed under an emergency decree, though it has been lifted in four districts. The emergency decree gives the security forces additional powers and blanket immunity for their actions, and is a key Malay grievance.

Early on in Thailand’s counter-insurgency model, security forces tended to apprehend men who fit the demographic profile of insurgents without much evidence. In one famous incident, known as the Tak Bai massacre, Thai authorities apprehended several hundred mostly unarmed protestors after a standoff. They were loaded onto trucks packed so tightly that eighty-three died of asphyxiation en route to an army camp. Violence spiked after this and other government missteps.

Thailand modified its COIN approach in response to the peak of the violence in 2007. By 2009, arrests became more surgical, based on actionable intelligence, and violence began to decline. However, the army’s May 2014 coup d’état generated new pressure on the military government to quell the insurgency, with the military’s counter-insurgency approach taking on a more severe approach. It mistrusted the ousted government for its handling of the insurgency and the concessions it appeared to be willing to make in peace talks. Thus, the number of documented incidents of torture of suspects spiked, from twelve between 2010 and 2013 to thirty-two between 2014 and 2015.

Yet, by 2014, the Fourth Army commander, in charge of all operations in Thailand’s south, understood that the military’s use of non-kinetic legal tools, excessive arrests, and false confessions garnered through torture military were counterproductive. In response, the military pushed for arrests and trials based on forensic evidence so that large swaths of the population would not be alienated. This strategy entailed a huge push to integrate forensics and ballistics from the past decade into a single database, and cold cases were reopened. The commander  ordered a large increase in forensic capabilities, established a state-of-the-art forensics lab, and urged the army to better assist the police with evidence collection. Police and Department of Special Investigations members were embedded within the security forces to collect evidence for trials.

In the midst of the army’s reforms, courts retained remarkable independence, routinely acquitting suspects due to limited government evidence. This had two net effects. First, the Royal Thai Army (RTA), which conducted most of the kinetic operations and detained the majority of suspects through 2014, stopped cooperating with the police due to disappointment that the police did not gather sufficient evidence. Second, and as a result, a spate of extrajudicial killings (EJKs) of suspected insurgents attributed to the military arose. In rare occasions, Thai courts have confirmed government EJK programs. Facing backlash for this, the military established compulsory vocational training centers for suspected insurgents. This policy has sometimes led individuals who had nothing to do with the insurgency to oppose the state, and has motivated some to join the insurgency. Insurgents often labeled those who did not join as government collaborators.

Recent events further highlight the COIN model’s deficiencies. In mid-August 2019, paramilitary rangers arrested a suspected insurgent, Abdulloh Esormusor. That night, he was found collapsed in his cell due to asphyxiation, and was rushed to the hospital where he remained in a coma. He died thirty-five days later due to complications from a prolonged lack of oxygen. The CCTVs in the interrogation room and cell were conveniently broken, but the military released a photograph of a healthy-looking Esormusor during his interrogation, belying the arrmy’s assertions that he had pre-existing conditions. “There is no evidence that the suspect’s collapse resulted from soldiers’ actions,” the initial Army probe found, infuriating the victim’s family and local community.

The courts have also lost their independence. Indeed, on October 4th, 2019, a lower court judge live streamed his suicide attempt after reading a prepared twenty-five-page statement in which he complained about pressure from his supervising judge and the military to reverse his acquittal of five suspects, as well as the systemic use of torture to elicit confessions, which he called “inadmissible.” “Return the verdicts to the judges. Return the justice to the people,” he said before shooting himself. Despite their acquittal—his ruling was not overturned—the government has not released the five men. These cases reinforce popular sentiments that the security forces are unaccountable and that the Thai state is patently anti-Muslim.

Every government since 2004 has vowed to end the insurgency. The former generals who run Thailand’s “democratic” government are no exception. However, their desire for success often leads them to adopt counterproductive methods. For example, in 2019, the cabinet proposed amending the law to make it easier for insurgents to turn themselves in. The military has refused blanket amnesties, though it used them effectively against previous insurgents and members of the Thai Communist Party. The current law regulating amnesties is so conditional that few insurgents would have any reason to trust it; the proposed bill is slightly improved, but insurgents with warrants or who can be tied to attacks remain ineligible, which totally defeats the point.

Sadly, the Thai government is squandering an opportunity to take action while violence is at historically low levels, notwithstanding a recent attack that left fifteen dead and five wounded. In 2009, thirty-seven people a month were killed and sixty-seven wounded, according to my open source dataset. In the first six months of 2019, 5.5 people a month were killed and 13.3 were wounded, respectively. The main rebel group, the Barisan Revolusi Nasional, which rejected peace talks for the past two years, met with the government in August. Nonetheless, the government immediately rejected their pre-conditions for resuming talks. It has whitewashed their promised investigation into the death of the suspect in custody, while the panel to investigate the judges’ claims of interference and torture will likely go nowhere. The military-backed government filed sedition charges against twelve members of the political opposition and academics for holding a conference in which they discussed amending the constitution to allow autonomy for rebels living in the deep south. These actions entrench popular notions that the government has no intention of seeking a durable political solution, but rather aims to reduce violence and ascribe it to criminality. A better COIN policy would seriously consider insurgent demands, depoliticize the legal process, and remain open to compromise. Otherwise, maintaining the current Thai COIN model ensures that longstanding grievances will fester, raising the specter that younger, more radical militants will adopt new strategies and targeting, including out-of-area attacks.