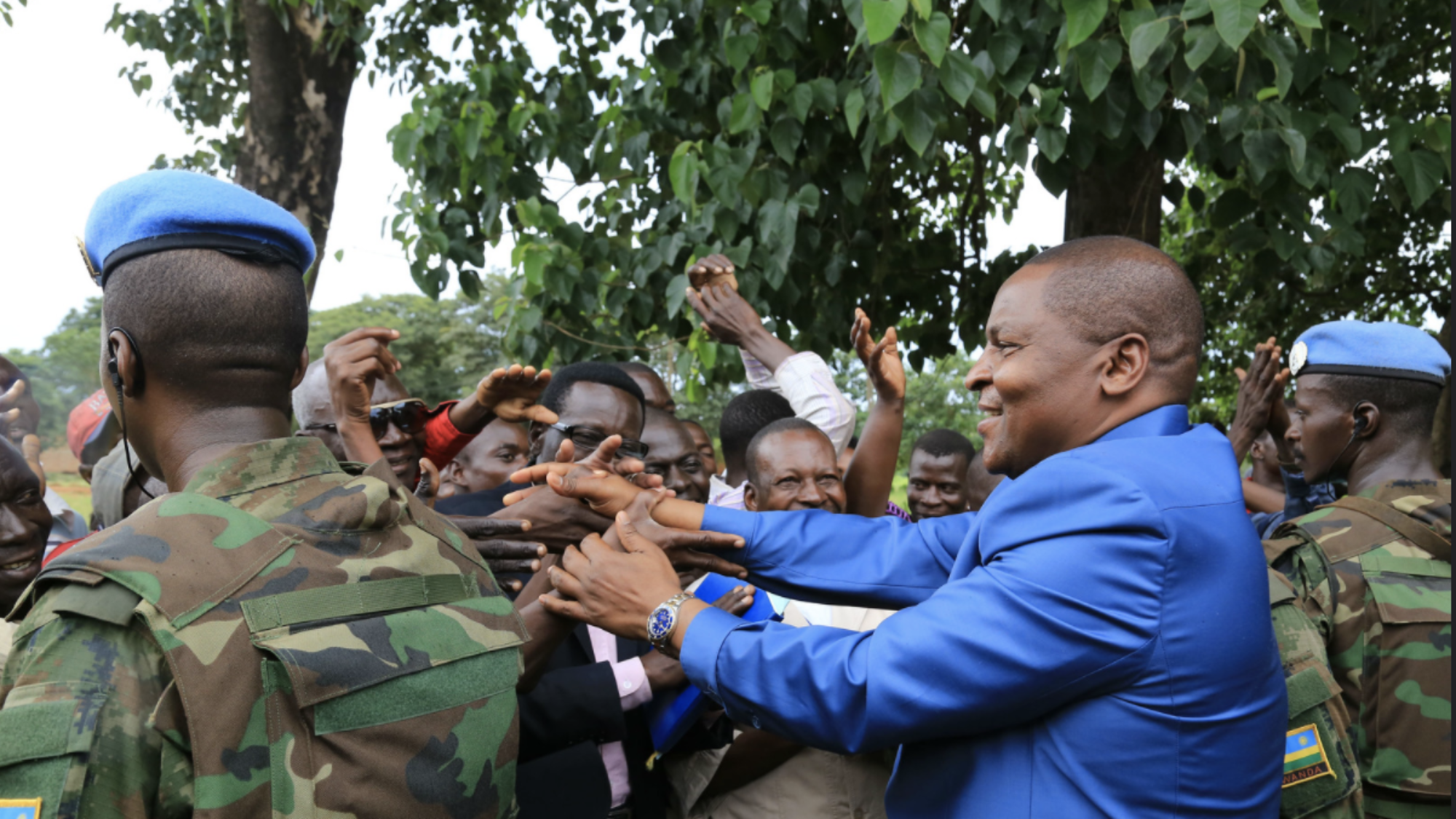 Title: State Authority Restoration in the Central African Republic: The Striking Gap Between Its Past, Its Potential, and People’s Expectations

The Central African Republic (CAR) could be a case of hope. After years of violence, the main armed groups and the government signed a peace agreement last year. At the end of 2020, elections are set to take place that could strengthen the democratic credentials of the country and grant its institutions the legitimacy needed to rebuild the state. As surveys have shown the populace is tired of the armed groups scattered (and fighting) throughout the country and demand the return of the state. The state is building up its army and deploying troops across a growing part of the country’s territory with the help of international actors. However, the restoration of state authority in the CAR remains unlikely. The state’s history is one of neglect, meaning there remains little to be “restored” and much to be built in the first place. Whether the state is willing and able to live up to the population’s demands is questionable. The military approach to state authority restoration and the integration of armed actors risks marginalizing the calls for an emphasis on public services. Locals hope for the return of the state—and one that is robust and caring. The reality of a militarized and inefficient state would shatter these hopes.

The vibrant academic debate on state authority restoration demonstrates how crucial the issue is to the endurance or abatement of conflict. Joel Migdal investigates how state leaders or institutions can barely mobilize public support without providing security and how strongmen challenge the state by providing security where the state does not. Andreas Mehler warns that “[i]t appears to be quite obvious that security forces are frequently part of the problem and less often part of the solution to Africa’s security concerns.” Multiple authors also point out that the extension of state power is not a one-way street. In his investigation of the Indian state of Assam, Nel Vandekerckhove observes conflict in those instances where one player overstretched itself in the delicate local power balance. Meanwhile, Alice Hills studies how the various Somali police services had to negotiate their role with local power brokers while facing donor pressure to fulfill a Western policing role. Finally, Alexander de Juan and Jan H. Pierskalla have found that security decreased in South Sudan during initial state penetration of the hinterlands, while the pacifying effect only set in when the state had established itself in the long term. As we will see, state penetration in the CAR is not a given in the long-term.

Over centuries, the CAR has been situated at a crossroads of ethnicities, trade, and political regimes. Its population within the borders we see today is diverse and has witnessed only a short history of shared institutions. The first experience of an institution congruent with modern borders was the French colonial administration, which granted vast land concession to French colonial companies. What these concessionary companies and the French colonists lacked in numbers and legitimacy they made up for in brutality. Central Africans resisted this state, and its politicians envisioned a more just society. However, on the eve of independence, the visionary Central African leader Barthélemy Boganda died in a plane crash. The first president, David Dacko, came to power through a questionable deal with the parliament and was deposed by army commander Jean-Bédel Bokassa in 1965.

Bokassa’s rule is often evoked when Central Africans recount a time when the state was powerful and present throughout the country. However, this applies only to Bokassa’s initial years of rule. He soon centralized rule and economic stakes in a small circle of confidants. He declared himself emperor, became paranoid, and committed horrific atrocities, such as killing primary school pupils that protested against Bokassa’s wife’s monopoly on the manufacture of school uniforms. It was during Bokassa’s rule that the infamous phrase was coined: “the state ends at Kilometer Point 12”—meaning there are barely any state institutions or employees outside the capital. None of the presidents that followed—often through coups d’état—altered the marginalization of the peripheries.

President François Bozizé returned to the colonial attitude of compensating for the lack of state capacity through an overabundance of force used against rebellions in the peripheries and could even count on the aid of France during his assault on rebel-held towns. It is against Bozizé’s autocratic, nepotist, and violent rule that the Séléka alliance claimed to rebel in 2012. However, upon taking power, they proved to be even more violent. They looted private, state, and natural goods wherever they could. Hundreds of local defence groups colloquially labelled Anti-Balaka formed to resist them, but these groups also arbitrarily pursued civilians accused of supporting the rebels, leading to the displacement of over a million people.

It is based upon this terrible state legacy that a transition was launched in 2014 after President Idriss Déby of Chad pressed the Séléka rebel government to step down. All key armed groups signed a peace deal, and the international peacekeeping mission changed from African Union to United Nations authority and increased threefold. Despite immense foreign funding, however, the transition government from 2014 to 2016 under President Catherine Samba-Panza was extremely inefficient and caught up in countless corruption scandals.

When President Faustin Archange Touadéra was elected in 2016, he found the country still divided and state institutions nearly non-existent. His government decided to put their hopes for change into their military, whose members had first fled the Séléka rebels and participated in Anti-Balaka atrocities against Muslims. The effective number of soldiers Touadéra had at his disposal in 2017 was only 7,000 for a country the size of France, and of these only around 2,000 were operational. Nevertheless, international actors agreed to this military proposition of state authority restoration. A European Union training mission was established, the United Nations aided with recruitment, and Russia began shipping armaments. These efforts have indeed improved the military’s strength and have allowed for its deployment throughout numerous towns in the country. Most international stakeholders, however, want to avoid military confrontation between rebel groups and the state or international peacekeepers. Rather, mediators achieved a peace agreement in Khartoum in January 2019 that would integrate rebel factions into the government and state military. Its implementation so far has fallen far short of its goals.

In fact, endeavours by the government, rebels, and the international community will not only fall short of people’s expectations but also work against them. First, international efforts to integrate the rebels go against the widely held and repeatedly expressed will of the vast majority of the population to deny impunity for war crimes. Second, people across all population groups and regions share a desire for the establishment of state authority to primarily provide jobs, education, health, infrastructure, and other public and personal needs of the people. However, this role today is almost exclusively taken on by international actors whom CAR’s citizens cannot hold accountable. While international actors may have good intentions in reducing people’s plight, they propose international human rights norms to create a legitimate state, while many Central Africans are seeking a forceful state that flexibly deals with local issues including witchcraft. Finally, many people buy into the narrative that state authority first and foremost should be restored through the army. This finding puzzles the external observer, because given the state’s past, it is unclear why this time around the army should behave in the people’s best interest. The primary line of reasoning seems to be that all alternative actors—notably rebel groups, auto-defense groups, and international peacekeepers—have failed to provide the security and services the population desires; thus, the state army is the last bet people have for a safer future. However, this positive expectation of the future will change if reliance on the military results in an abusive security apparatus and a continually negligent state.

State authority restoration in the CAR will only work if the national institutions become capable and willing to do what in their history they have not attempted to do: provide security and public services throughout the vast country. Only when the government, parliament, judges, and state officials take the lead in this immense task can international aid be worthwhile and produce results. First, if and only if the army proves willing to use its current limited means to provide unbiased security, the United Nations mission and European Union training mission should augment—not replace—the state’s capacity gaps. Second, public service provision must be in the hands of the state, even if this means that things will not be done according to international standards. International organizations continuously substituting for the state has proven untenable as international funding levels are already declining. The only realistic solution is that the state this time must live up to the expectations of its citizens.

Tim Glawion is a research fellow at the German Institute of Global and Area Studies. He has investigated conflict and peace in the Central African Republic, Democratic Republic of the Congo, Egypt, Kenya, Haiti, South Sudan, and Somaliland. His latest book is The Security Arena in Africa: Local Order-Making in the Central African Republic, Somaliland, and South Sudan published by Cambridge University Press in 2020.